Although Ferdinand Porsche had established his automotive design consultancy in the early 1930s, his name would not appear on a car until 1949. When it did, it graced one of the all-time great sports cars: the Porsche 356.

Having started manufacturing with a short run of aluminium-bodied cars built in Gmünd, Austria, Porsche switched to volume production of the steel-bodied 356 coupe at its old base in Stuttgart. The work of Ferry Porsche, the 356 was based on the Volkswagen designed by his father. Like the immortal ‚Beetle‘, the 356 used a platform-type chassis with rear-mounted air-cooled engine and torsion bar all-independent suspension. In 1951 a works car finished first in the 1,100cc class at the Le Mans 24-Hour Race, thus beginning the marque’s long and illustrious association with La Sarthe racetrack. Constant development saw the 356’s engine enlarged first to 1.3 and then to 1.5-litre; the original split windscreen replaced by a one-piece; and a Porsche synchromesh gearbox adopted. A cabriolet followed hot on the heels of the original 356 coupe and then in 1952 a trial batch of 15 „America Roadsters“ was assembled at the behest of US importer Max Hoffman, who had persuaded Porsche of the potential for a ‚cut-price‘ entry-level model. The Roadsters‘ successful reception in the USA led to the introduction of the Speedster model in 1954. The Speedster’s inspiration is also credited to John Von Neumann, Porsche’s US West Coast distributor, who had chopped down a Gmünd-built coupe in the late 1940s to create a lightweight competition car. Explaining such a car’s appeal Neumann once said: ‚Guys want to go, on a Saturday night in June, down Sunset Boulevard with their elbow over the door and the girls can see them in the car.‘

Instantly recognizable by virtue of its low, wraparound – as opposed to V-shaped – windscreen, smaller and entirely retractable hood, lower door waistline, horizontal trim strip at the level of the door handles, and twin bucket seats – all of which served to emphasize its sporting image – the Speedster was, in effect, an ‚economy‘ model intended to compete with the cheaper British sports cars. The Speedster was powered initially by the 1.5-litre version of Porsche’s horizontally opposed four. The Speedster was the lightest of the 356s, enjoying a commensurate performance boost that meant over 100mph was possible. Allied to its already renowned handling characteristics, this meant that the Speedster was an instant success in the burgeoning American sports car racing scene.

Testing the Speedster alongside its Coupe sibling in 1956, Road & Track magazine declared, ‚A more comfortable sports car for long, high-speed journeys would be very hard to find and certainly no other car achieves the combination of comfort, performance and fuel economy of the Porsche Continental Speedster or Coupe.‘ Its combination of style, performance and value for money made the Speedster deservedly popular – 4,822 examples being constructed between 1954 and ’58 – and today this most handsome of the 356 variants enjoys iconic status.

The car we’re offering is one of the 1700 Speedster 1500/1500S built and one of about 150 Pre-A 1500 Super produced according to our research. It left the factory on January 26th, 1955 and was delivered new to Hoffman, New York. The car was originally Signal Red with interior „Acella Bast Cream“. It received its first registration in the same year. In 1971, the car was found in California, in the name of Mr. Lee Blanton, Worthington, who had bought it in 1961. The car would have been racing in the 1950s.Back in France a few years ago, the car has undergone a complete restoration of high quality, still equipped with its original gearbox and a 1500S engine type 528/2. The car is complete with tool kit, jack and spare wheel. It has its Kardex (Porsche Certificate of Authenticity), has just been serviced and is working very well. This rare 356 Speedster 1500 S in this very chic livery is the perfect car to participate in the Mille Miglia. 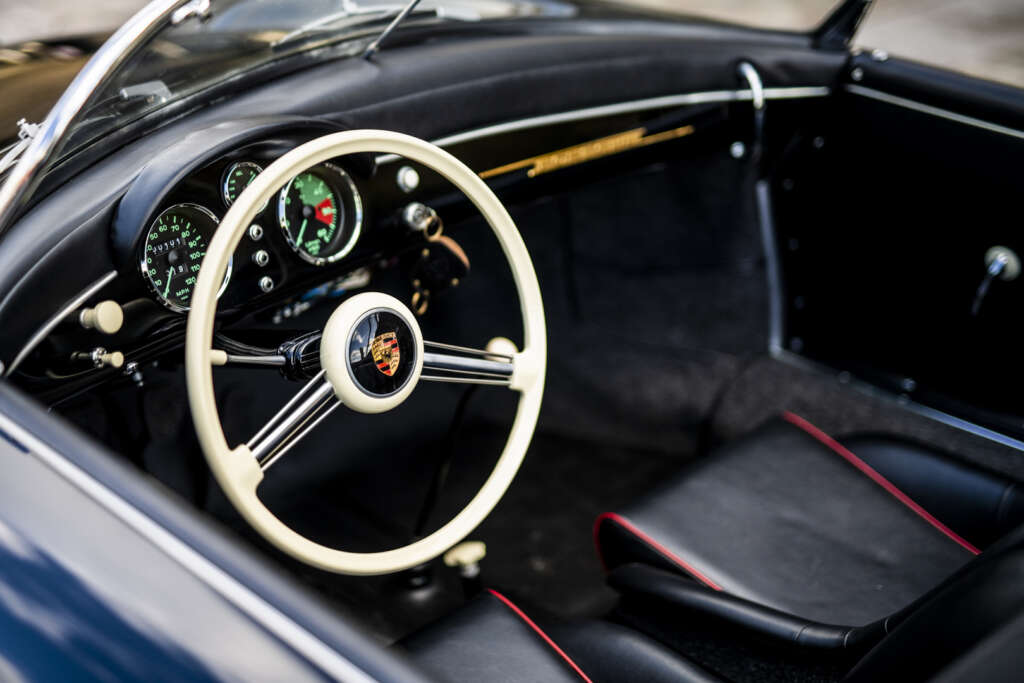 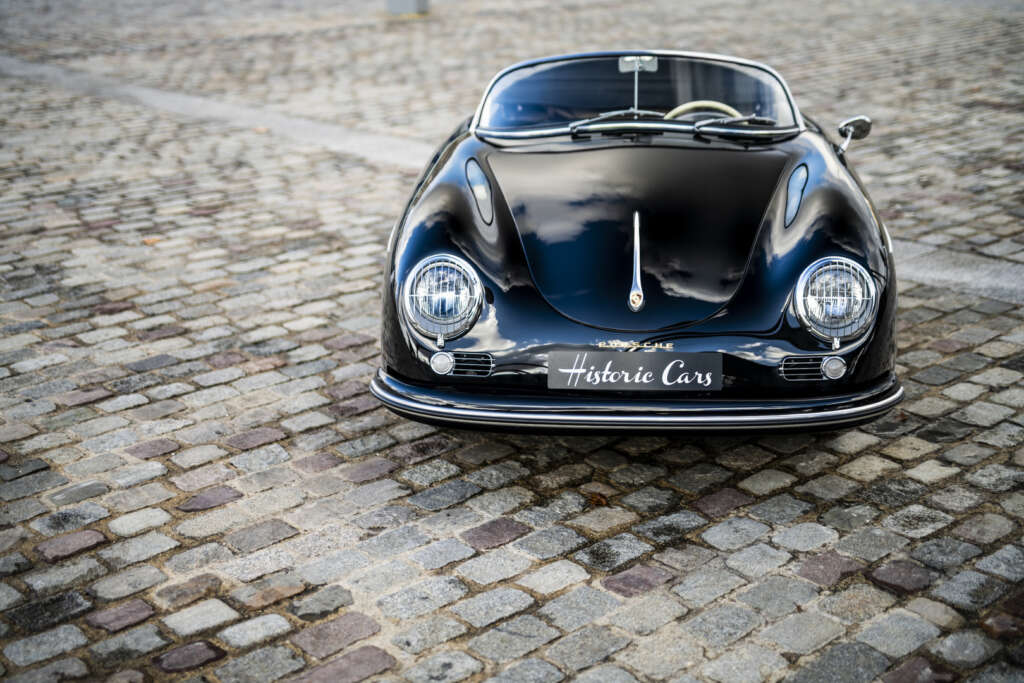 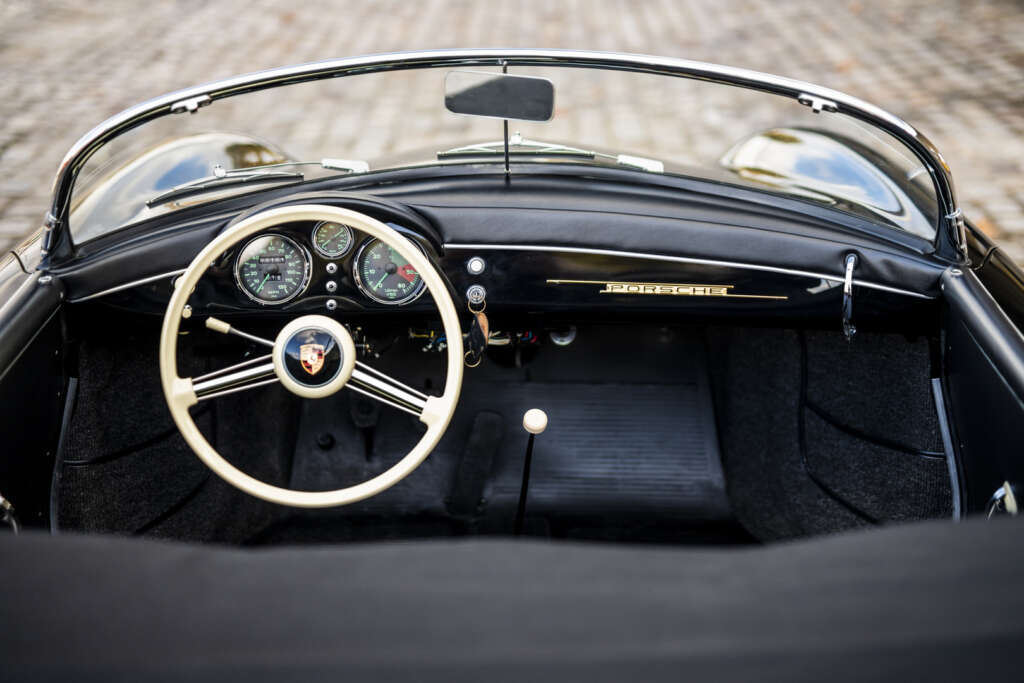