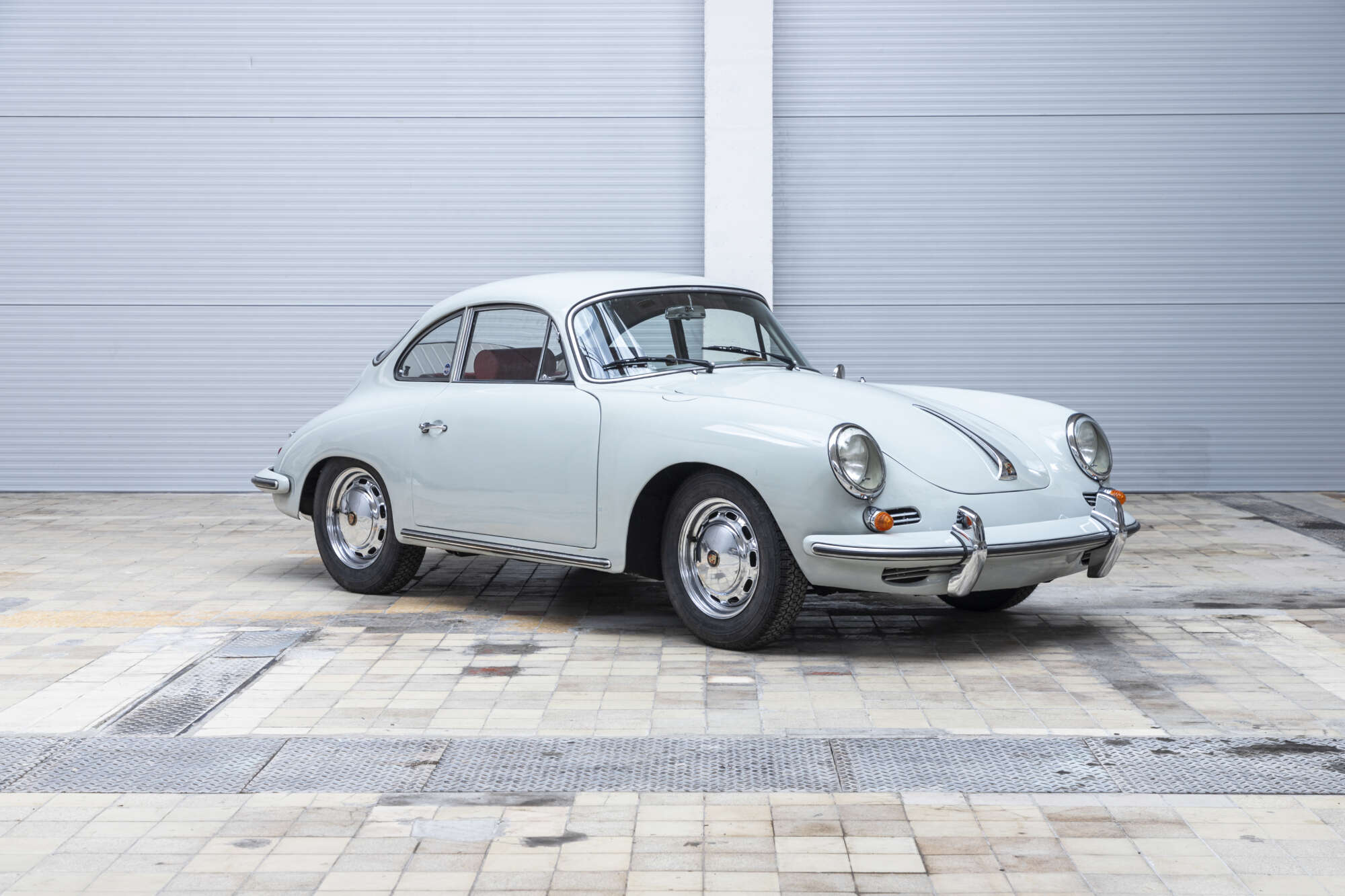 Fully matching numbers (chassis + engine + transmission) – 28 years of last ownership – Original colour of Dolphin Grey  – Original Blaupunkt Frankfurt radio and other equipment included – Upgrated electrical and sport exhaust system – Full history since 1983 – Documents were checked and the car was photographed personally by Auctomobile – Other features: possibility of assisting with registration, transport, insurance, storage and Trusted Checkout payment – Please note that this car will be available for viewing by prior appointment in Hradec Kralove, Czech Republic This 1964 Porsche 356C coupe was built in September 1964 and acquired by the last owner approximately 28 years ago. Finished in original colour of Dolphin Grey over red leatherette, the car is powered by a numbers-matching 1.6 L flat-four paired with a four-speed manual transaxle. Equipment includes a 12-volt electrical system, an aftermarket exhaust, KYB shocks, a wood-rimmed Moto-Lita steering wheel, rear luggage rack, and four-wheel disc brakes. Fluid changes were performed in preparation for the sale, and additional work carried out during last ownership included a repaint, interior refreshment, rebuilt Dellorto carburetors, and a replacement clutch. This 356 C coupe is now offered with a Porsche Certificate of Authenticity, a partial set of tools in a leatherette bag, manuals, an uninstalled front bra, spare parts, service records beginning in 1983, and a clean New Mexico title in the last owner’s name.

Finished from the factory in Dolphin Grey (6410), the body received a two-stage repaint and the front hood hinges were replaced. Equipment includes a retractable antenna, body-colored bumpers with polished overriders, and a chrome rear luggage rack. The trunk floor was replaced during current ownership due to rust, and the seller notes previous repairs with evidence of body filler in the front fenders, driver’s door, and lower front fascia.

The polished 15” steel wheels feature matching hubcaps with colored Porsche crests and are wrapped in 165-width Michelin XZX tires that were installed since the photos were taken. The seller states that the master cylinder and wheel cylinders have been rebuilt, and the brake fluid was changed in April 2021. Additional maintenance during last ownership has included the installation of a replacement steering damper, coupler joint, and KYB shocks. The removed Koni shocks are included in the sale.

Originally trimmed in black leather, the cabin was refreshed by Autos International of Escondido, California and features bucket seats with headrests reupholstered in red leatherette along with a gray dash pad, door panels, and square-weave carpets lined with a black rubber floor mat. Replacement speakers and an auxiliary cable have been installed and it comes with a Blaupunkt Frankfurt radio. Two aftermarket headrests and additional red leatherette material accompany the vehicle.

A wood-rimmed Moto-Lita steering wheel with a Porsche crest center cap sits ahead of a matte black-painted metal dashboard housing VDO instrumentation. An oil pressure gauge has been fitted in place of the outside temperature display, though the removed unit is included in the sale. The five-digit odometer shows just over 74k miles, around 19k of which have been added during last ownership, the total mileage should be accurate.

The air-cooled 1.600 ccm flat-four has been overhauled and is equipped with twin Dellorto carburetors that were rebuilt in 2017. The electrical system has been converted to 12-volts, and an upgraded starter motor, a PerTronix distributor, and an aftermarket Abarth-style sport exhaust system have also been installed. An oil change was performed in January 2021.

Engine stamping *715188* shown in the gallery matches the number displayed on the Certificate of Authenticity provided also in the gallery. The transmission number (81926) is also matching.

Power is sent to the rear wheels through a four-speed manual transaxle that was fitted with a replacement clutch, throwout bearing, fork, cable, and shifter bushings. Undercoating has been applied to the chassis. The Porsche Certificate of Authenticity shows the factory colors, optional equipment, and identification numbers.