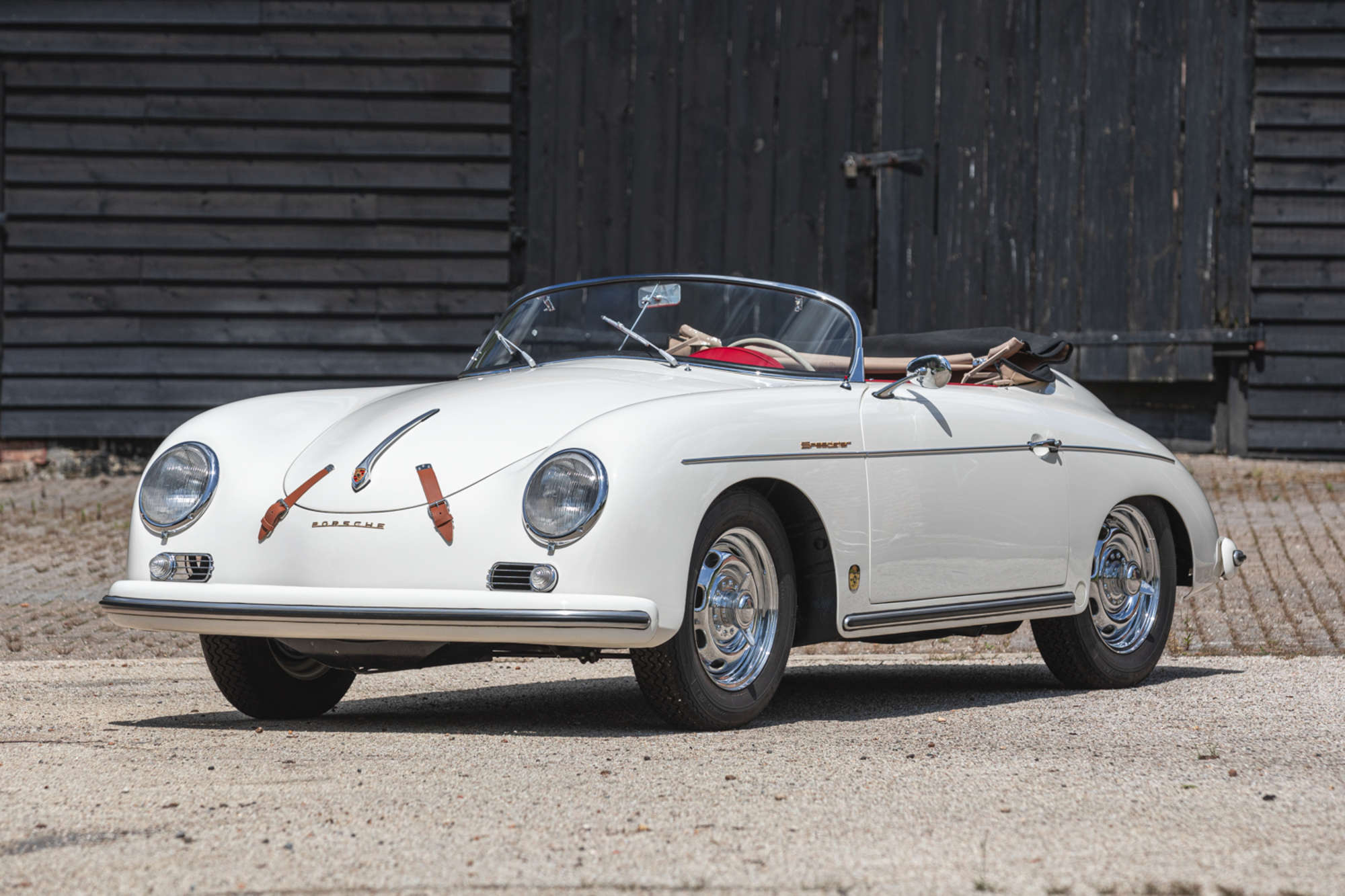 A fabulous early 1600S Speedster, UK-restored with no expense spared and Show/Concours quality.

Build completed on 29/10/1956. Delivered new to California in left-hand drive – Listed on the Register as a ‘1956 356 Speedster T1 A by Reutter’ –  Fitted with a 1600 S engine (Type 616/2). Engine number conforms to original range for the Speedster in late 1956 – First registered in the UK on 01/12/2016 – Totally refurbished and rebuilt with very little use since – Superbly finished in Ivory with a classic red interior – Polished chrome Rudge wheels As the first serial production car to wear the Porsche name, the 356 was the car that set the company firmly in the direction of building high quality, cleverly engineered sports cars that could punch well above their weight both on the road and at the circuit, a philosophy that has changed little today. The 356 was a relatively simple car that shared its basic layout with the Volkswagen Beetle and utilized a monocoque chassis design and a highly reworked version of the VW’s flat-four cylinder engine slung out behind the rear axle. For his own car, Dr Porsche dramatically improved the VW engine with new heads, new cam, new crankshaft and other internals, as well as a dual carburettor intake. The result was an engine that revved freely and produced double the horsepower of the Beetle from whence it came.

True to the Porsche ethos, the 356 was continuously being refined and revised over its 17-year production run without ever really being fully redesigned, and by the end of the run in 1965, horsepower had nearly doubled again from the first 356s. Along with its continual mechanical refinement, the 356 was offered in many different body configurations sourced through a variety of German coachbuilders. Standard cars included the Coupé, Cabriolet, and Speedster. There were also Notchback, Roadster and Convertible ‘D’ variants, most featuring subtle differences in the shape of the body. Perhaps the purest expression of the 356 as a driver-focused sports car was the Speedster. It first appeared in 1955 at the suggestion of the influential American importer, Max Hoffman who believed that a stripped-down, lower-cost 356 would sell well in America, particularly in sunny California where sports car racing was all the rage. He believed that a lightweight car with simple equipment could be readily set up for track duty and driven home at the end of the day. Hoffman proved right and the Speedster was an instant hit. Instantly recognisable by virtue of its low, wraparound – as opposed to V-shaped – windscreen, smaller and entirely retractable hood, lower door waistline, horizontal trim strip at the level of the door handles, and twin bucket seats, all of which served to emphasise its sporting image. Powered initially by the 1.5-litre version of Porsche’s horizontally opposed four, upgraded to the new 1.6-litre, 60bhp engine with the introduction of the improved 356A in 1955. Priced at $2,995, the Speedster was the lightest of the 356s, enjoying a commensurate performance boost that meant over 100mph was possible. Allied to its already renowned handling characteristics, this meant that these elegant little cars were an instant success in the burgeoning American sports car racing scene. Production was relatively short, however, running from 1955 through 1958, when it was replaced by the heavier, more luxurious Convertible ‘D’. Today, the Speedster remains one of the most highly sought-after and collectable variations on the 356 theme.

From our vendor: ” Since its import, this early 356 Speedster has since been totally restored from a bare shell. After being shot-blasted, the body required structural repairs to the floor and boot well. The doors, front and rear wings are however as originally fitted on the car when it was delivered 64 years ago. The bodywork was undertaken by Wayne Parker and his team at Norfolk Premier Coachworks in Norwich. The engine and gearbox was stripped and rebuilt by racing legend, Andy Prill who, at the time, was in partnership with Maxted Page. The suspension was dismantled, refinished, re-bushed and refitted with all new bearings by Darrell Parker at DNB Mechanical Services in Norwich. Darrell was responsible for overhauling the braking system and the reassembly of the car. In doing so he fitted a new wiring loom, the refinished bumper and chrome plus reassembling and refitting the refurbished speedo and clocks into the dash. The interior was retrimmed by specialist coachtrimmer, Gary Sargent in Norwich. As far as proved possible, the car today reflects what it would have been in 1957″.

Finished in gleaming Ivory with a classic red 356 interior and sitting on polished-chrome Rudge wheels, this little Speedster has hardly been used since its restoration and appears immaculate throughout. It’s a delightful piece of Porsche motoring history and is sure to appeal to discriminating collectors, to every lover of classic sports cars, and to those who love its open top, its elegance, its simplicity and its gracious and disarming style. It’s a reminder of the late Fifties when life was, perhaps, a little simpler.

We look forward to being able to offer you the opportunity to view this lovely motor car. It will be available to view prior to auction on our designated viewing days but to accommodate any interested parties beforehand an earlier viewing is possible.