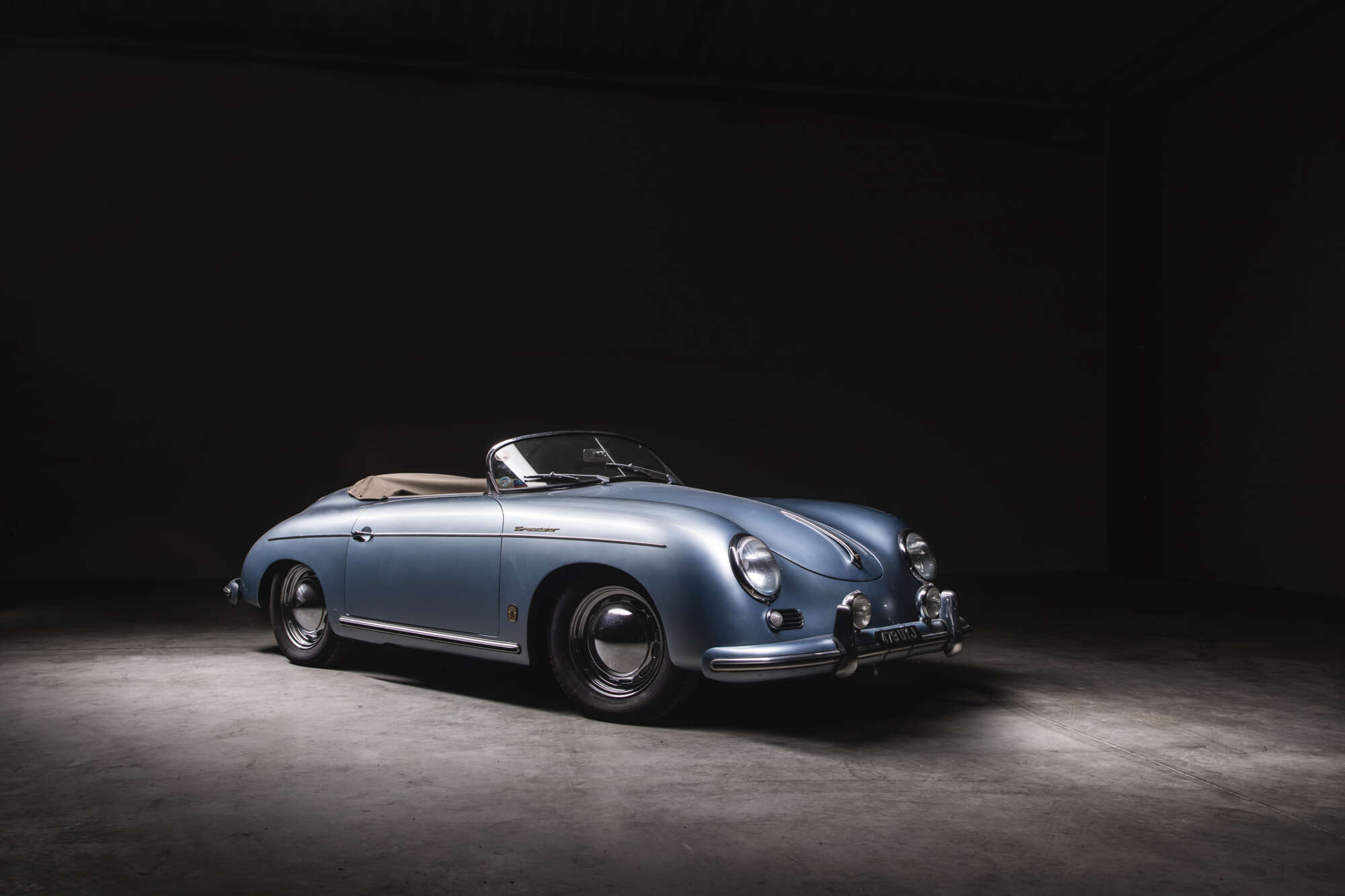 Please note that this car will be available for viewing by prior appointment in Prague, Czech Republic 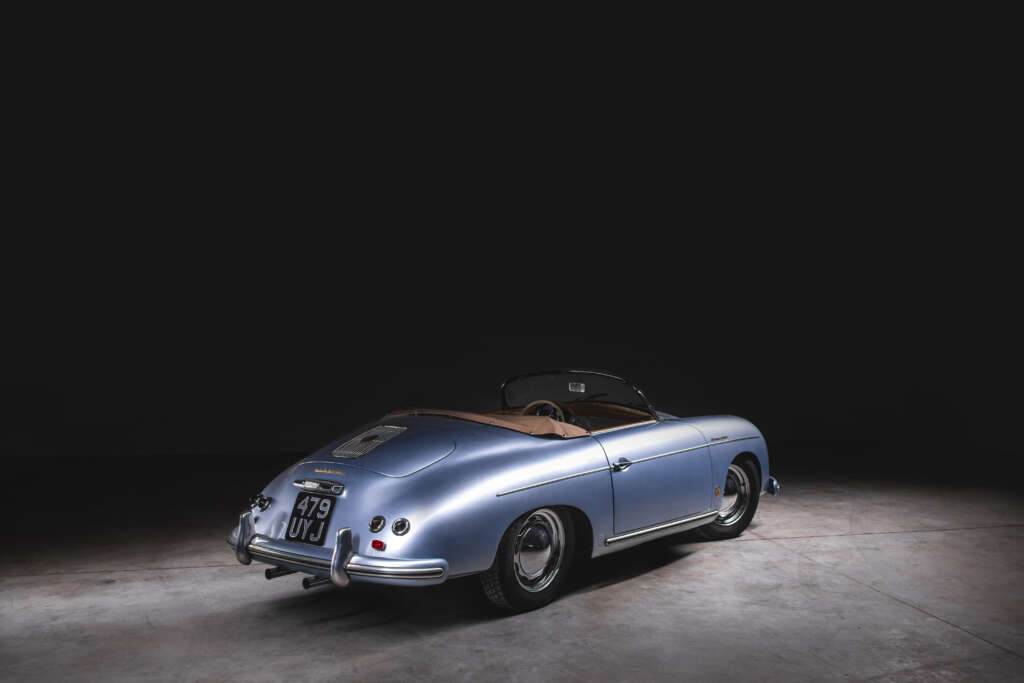 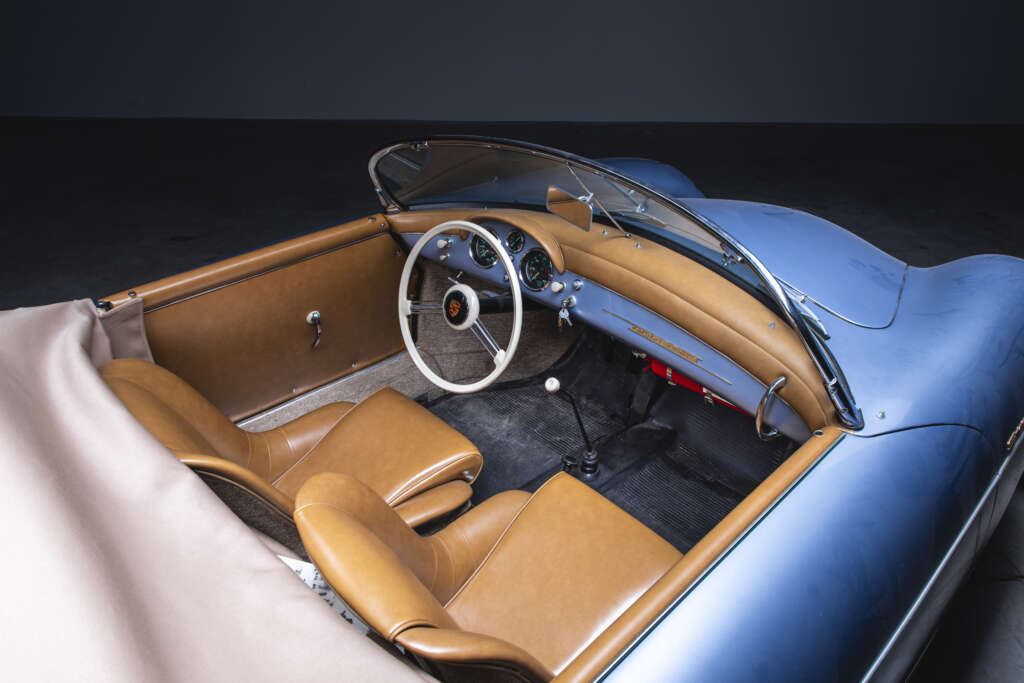 The first generation of the Porsche Speedster is today among the most popular classics. Even more if it is the rare PRE-A series that has already two times undergo a high quality restoration process.

In the ’50s, Porsche was not well known in America. But everything changed, when its dealer Max Hoffman, persuaded the automaker to develop a special lighter (and cheaper) version in Europe well accepted model 356. After some problems, the Speedster finally saw the light of the world: lightweight, sporty version of the car, which had finally managed to compete with imported British sports cars in terms of price. Hoffman convinced Ferry Porsche that he can sell any product from Porsche, if he reasonably set “price from”. And he was right. Although the basic version lacked many elements including heating and tachometer had been optional, they managed to get the price below $ 3,000. And it was the key moment of success.

Small, lightweight sports car started to conquer mainly sunny Southern California, and it soon became apparent that it is not only good for cruising on boulevards, but also for racing. Speedster soon became admired mainly due to the excellent driving characteristics and controllability. And thanks to this, little speedster soon built up a great reputation in the US. And not only there – in Europe, small sports car fared particularly well in uphill races and competitions of circuit.
Speedster was produced from 1954 to 1959 and was created a total of 4145 pieces (together with the 1959 model Convertible D). The version Pre-A established only in 1233 examples were all built from 1954 until 1955. This lightweight car was sold in two basic versions: “Normal” and stronger “Super “, at first with 1.5 liter displacement and with 1.6 liter later on. It indeed offered many different uses, from common everyday use to the racing on track days – for example, a detachable windshield or covers for front headlamps helped in such a situation.
They quickly proved themselves in competition.They were true multi-purpose sports cars whose owners could drive to the track, quickly unbolt the removable windshield if they preferred, tape over the headlamps, slap some numbers on the side, and go racing. Soon, the small-displacement production sports car grids of the SCCA and California Sports Car Club were filled with Speedsters whose brilliant handling qualities made them consistent favourites. Whilst most examples were exported to America, they made their mark in Europe as well, consistently winning their classes at hill climbs and circuit racing events.

This pretty “pre-A” left the factory on 26 September 1955, wearing white enamel paint (code 603) with a black leatherette interior and black trim, which included its top, side curtains, and tonneau cover. According to its factory Kardex, this Speedster was fitted with sealed-beam headlights and a speedometer marked in mph for the U.S. market. From Hoffman’s New York City sales agency, it was soon on its way to its first owner. The earliest documents provided with this car indicate that it was still registered in 1984 to A. Pettyjohn, of Sunland, California.
That year, it was sold to a Louis Nelli, of Chatsworth, California. The car returned to the East Coast in 1986, where Kermit Heim, a 356 enthusiast in Tampa, Florida, spent the next two years thoroughly restoring it. The quality of his workmanship was such that the car received a 100-point score from the judges at Werksfest in 1989. Mr Heim offered this car for sale in the June/July 1990 issue of The 356 Registry Magazine, which described it as follows: “1955 356 Speedster #80824. Red/tan with 1600S engine. Concours winning restoration of an unmolested Cal/Nev. car. Color sanded finish, low bow top, NOS mesh stone guards and fog lights. Comes with the correct 1500 engine. Beautiful and expensive”. Mr Heim retained ownership of this delightful little Porsche until the current owner acquired it from his estate.
Today, after the second renovation, the car is finished in Aquamarine (Code 607), a period-correct Speedster colour, with a tan vinyl interior, beige square-weave carpet, and German fabric hood, tonneau, and side curtains. A pair of Marchal 670 driving lamps is mounted on the front bumper. The instruments were restored by marque experts at North Hollywood Speedometer, whilst the Zenith carburettors have recently been overhauled. The car is also fitted with a new Dansk sports exhaust.
Currently fully functional and visually beautiful car enjoyed the cover of a classic car magazine and also started at classic cars rallyes throughout the Europe. For example at the 2015 Silvretta Classic, it also became a winner of the Porsche Trophy with an 8th place overall at the Carlsbad Classic in 2015. Extremely attractive Speedster Pre-A series has undergone the first top renovation in 1988 and a year later it became the winner of a Concours d´Elegance with 100 out of 100 points!
Today, a Speedster is a must-have for any serious Porsche collector. Only 1,233 pre-A Speedsters were constructed, and here is an opportunity to own a fine example in an attractive colour scheme that has a more powerful “SC” engine, one that is capable of providing many miles of fast and enjoyable motoring. For the purchaser desirous of bringing the car back to its original mechanical specification, the correct 1500 Type 546/2 engine (number 34467) is included.
This charming Speedster, currently unregistered, but still carrying the last UK registration number 479 UYJ, is supplied with a large folio of invoices that pertain to its comprehensive restoration and past registrations. Additionally, the file includes the October 1989 issue of the Porsche Club of America’s magazine, which notes the car’s 100-point concours success, as well as the aforementioned Porsche Certificate of Authenticity, which was addressed to Mr. Heim in 1989.
The car comes with two large folders, one with invoices from servicing and renovations, the second with the report from both renovations with pictures proving that in both cases, a bare metal renovation was undergone. Also the interior, dashboard, engine, everything nut a bold restored, overhauled and documented.