So-called “backdate 911s” are Porsche, under their backdated exterior e.g. on 911 RS F-model

Modern technology is stuck. The starting point is always the same: an air-cooled 911 becomes new invented. The Californian company “Singer” was a pioneer in this segment. Either the Coupé or the Targa of the 964 series serves as the basis, the Porsche from 1989 to 1994 produced. Depending on the customer’s wishes, there are some “Singer special copies” at prices of more than Brought $750,000 in the US. This vehicle “Porsche 911 RST” was built a few years ago based on “Singer’s RSR look” in Nutt Very elaborately restored using the bolt method. Various modifications were made during the restoration made to the body, technology and interior. 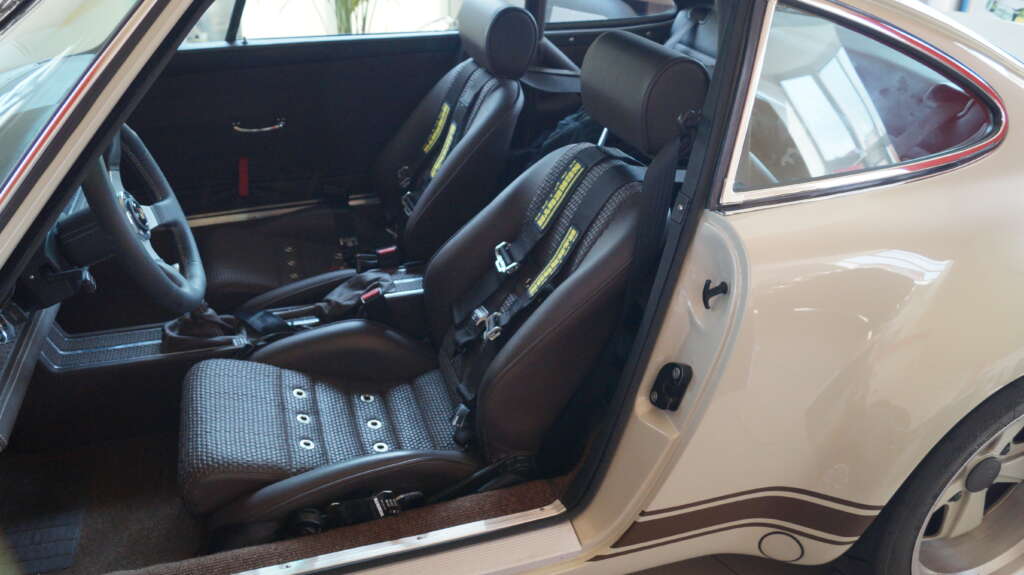 Worth mentioning in particular:

 The body of the Porsche 964 was converted to the 911 F model in the front and rear sections, for this purpose, the front fenders were cut open to make room for the indicator inserts and create ventilation slots. The rear fenders and end panel were also made upgraded.

 The front and rear fenders have been widened and butt jointed.

 Both side panels have been replaced. An opening for the oil Filler created.

 Front spoiler with aluminum frame like the Porsche 911 RSR

 Front hood made of steel with opening for tank filler neck

Even if the restoration is a few years ago, the current general condition of the vehicle is as described as restored. The outer / inner body skin and body add-on parts were in the course of the restoration using the nut-to-bolt method, the vehicle was completely redesigned to look like the 911 RSR converted, the body panels were used on butt. Screws were partly through Stainless steel screws replaced or galvanized.

The vehicle was painted in a multi-layer process over several weeks. The color tone is geyser gray metallic, the factory standard is no longer given due to the repainting. The paintwork is even and can be considered as new. The paint gloss is good, the large body parts are consistent in the surface. All seals were made during assembly renewed.

The windshield with green wedge and the rest of the glazing, including the window seals also new.

The vehicle has Porsche Fuchs rims with Toyo semi-slicks 255/40 ZR 17 at the front and 315/35 ZR 17 rear mounted. The inner ring of the rims is painted in the color of the vehicle.

All fastening points of the door hinges, the hinges of the tailgate and the engine lid as well as the Door lock attachment points are good and do not sag. The lock latch is galvanized. passenger interior. The interior is also in a restored general condition. The seat covers / the seat core and the rear seats are newly upholstered in brown genuine leather with a special weave. All Instruments were renewed during the restoration in F-model optics and with new chrome elements upgraded. The dashboard, center console, door panels and other trim parts are also covered with leather, some decorative elements in woven pattern. The brown hair yarn Boucle’ is included edged in brown leather. The switch elements have an aluminum look. The sports steering wheel has the Porsche logo and lined with leather. The vehicle has the series belts and harness belts in the front area.

According to the owner, the engine was completely rebuilt and fitted with high-quality components. The displacement was increased from 3600 cm³ to 3800 cm³, new liners and pistons, sports camshaft and delivers 380 hp. A racing clutch and the disc brake system were also installed installed by the Porsche 911 Turbo.

The visual impression is good, the oil cooler is not corroded, liquid could leak out during cannot be determined during a test run. attachment parts

The closer optical and partly technical inspection of the add-on parts on the engine shows none abnormalities. The existing screw connections, hose clamps, built-in hoses and cables as well as other metal connections show no signs of damage. A liquid leak could not to be determined.

The engine runs mechanically flawlessly and does not make any atypical noises. contamination by Liquids, oil leaks or rising oil vapors from the crankcase ventilation could cannot be determined. The overall impression of the engine and engine compartment can be described as good.

The smooth running of the engine was confirmed by the good visual impression. The engine jumped after that pressing the starter immediately. The engine ran clean, unusual mechanical noises could cannot be determined. The transmission shifted easily, and the gears were easy to engage no difficulties.

The functional test of the technical equipment such as headlight flashers, turn signals, windscreen wipers did not result in any disturbances. The vehicle was then inspected on the underbody. Vehicle underside floor group The underbody showed a good condition corresponding to the overall condition of the vehicle and is free from damage. Underbody/stone chip protection is good and has been like the cavities sealed. The exhaust system is gas-tight. The fuel and brake lines, the transmission differential unit was dry, liquids did not leak out.

Checking the front/rear axles did not reveal any complaints regarding excessive play in the bearings or the suspension parts. It was a Brembo disc brake system from the Porsche 911 Turbo installed. Axle components were powder coated, screws and other attachment points were galvanized. A K&W coilover kit is installed.