The early Porsche 911 Speedster that never was. The builder drew his inspiration from the dreams of Stan Townes and Al Holbert who wanted a 911 Speedster to be built by Porsche. Although that reality never came until much later, this 911 gives you the chance to experience, what could have been. From major alterations to minor details the craftsmanship put forth is incredible, achieving a whole new look for the 911. This 1971 Porsche 911 is something truly special. For anyone who knew, Stan Townes created the original 911 Speedster concept in the early 1970’s. Later, Al Holbert and his longtime friend Tim Everett had ideas for Porsche’s concept Speedster. This 911 Speedster was built to be what an early 911 Speedster could have been. Countless hours were put into building this beautiful 911, care was taken into every aspect with the inspiration to keep it pure to Porsche design cues of the era.

Body work consists of the following aspects, the cowl was modified to accommodate a shorter windscreen and the windshield wipers were removed. The rear panel was lowered and extended 11” forward, along with Carrera-style fender flares. Fiberglass bumpers and bonnet were installed,  door handles shaved, and side windows removed. A modified Boxster roll bar was mounted, accompanied with a removable black mock half tonneau cover.

The interior was refinished with reupholstered comfort seats out of a later 911 with Pepita cloth inserts. A wood-rimmed Moto-Lita steering wheel and a Rennline brushed-metal dash hold the modern 356-style gauges. Custom door panels feature large pockets and pull straps. The heat system was retained and uses vents under the dash. The modern 356-style gauges are fitted with a GPS speedometer. The modified fuel tank uses a center filler. An upgraded blade-style fuse box is installed, and an Odyssey battery is fitted in the smuggler’s box along with a kill switch. Specially fitted Coco Mats cover the driver and passenger footwells.

Supertec Performance of Fallbrook, California built the flat-six engine approximately 12 years ago. The crankcase is from a ‘71 911E and the displacement was increased to 2.4 liters. Fitted with 9.5:1 pistons, 2.7 liter crank, Supertec head studs, “S” heads, 3.0 oil pump, and Carrera chain tensioners. The internals have been built to 911S specifications, and the shroud is an orange 2.4L 911S-style item. 50mm PMO carburetors are fitted, and the ignition system consists of an electronic distributor from 123 Ignition, an MSD ignition controller, and an MSD Blaster 2 coil.  A recent tune up of the carbs and oil change have been performed in preparation for the sale. The 5-speed 901 manual transaxle is on good health, in 2019 2nd gear’s synchromesh was replaced along with gaskets. The suspension rebuilt using new Bilstein shocks and adjustable Tarrett Engineering sway bars. The 17 inch Fuchs-style wheels are staggered, 7 inches up front and 9 inches in the rear wrapped in Yokohama Advan Neova tires. New brakes were also installed along with stainless steel flexible lines. The build was finished in 2017 with around 2,000 miles put on the clock since. 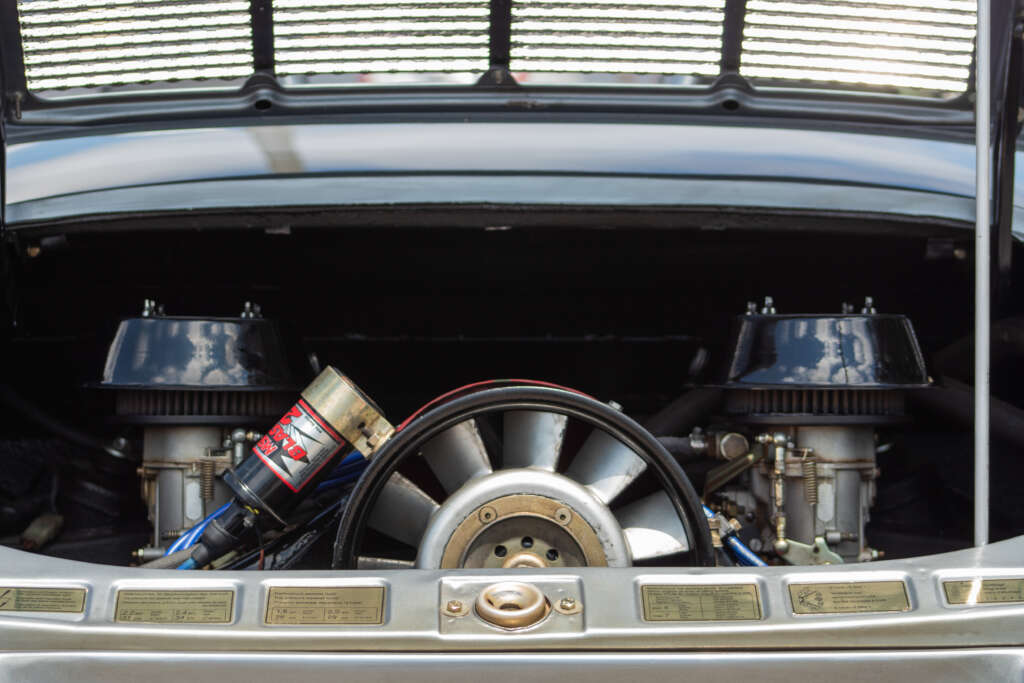