This Porsche 911 3.0 RSR Replica is a stunning tribute to one of the rarest Stuttgart models, built on a genuine period-correct shell, and presented in very good order. Under the engine lid is a 3.0-litre flat-six with a shuffle-pinned crankcase, producing around 320bhp, driving the rear wheels via a five-speed manual transmission. The odometer shows 6,199 km, which is understood to be the mileage since the build was completed. 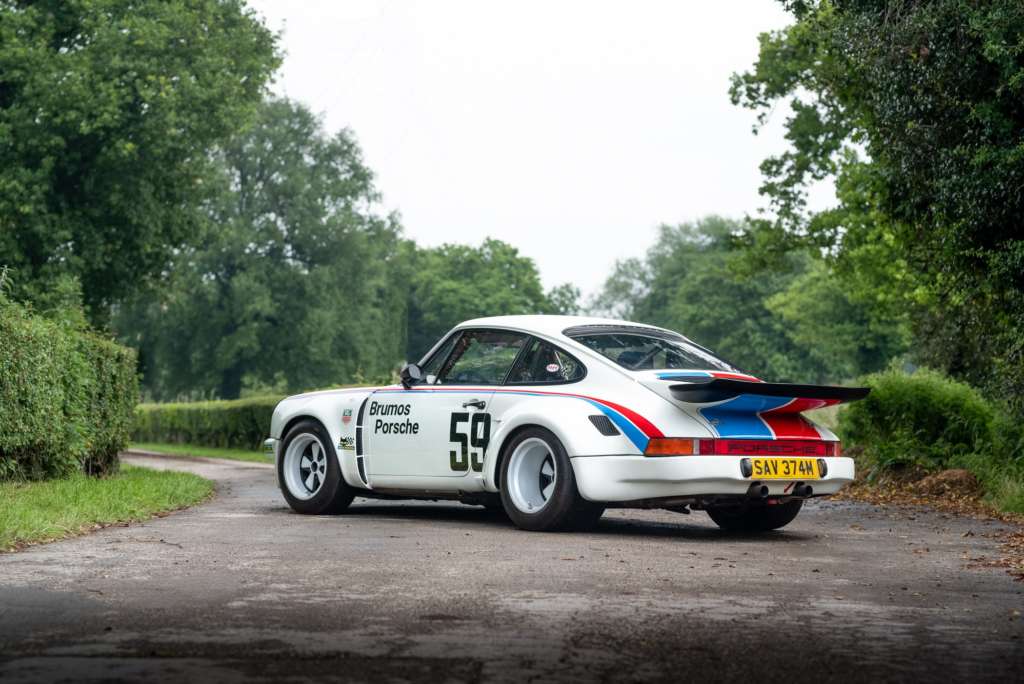 It is understood that just over 50 examples of the 3.0 RSR were built by the factory for racing, and if you are offered a genuine car today, the price will likely be a seven-figure number. Given this scarcity, the appeal of a smart recreation becomes obvious. This particular car started life as a left-hand drive 1974 911 S, and was transformed to its current guise over the course of 2007. The build is documented by numerous photos in the history file.

The rolling chassis was built up by classic Porsche specialist Auto Knoll using the period-correct 911 S shell. It features unique front and rear bumpers, wider rear arches incorporating air vents ahead of the wheels, and wider front wings that are also vented. There is also a large rear ‘ducktail’ spoiler, and a centre-fill aperture for the fuel tank. The livery was applied more recently, inspired by the Brumos team ex-Peter Gregg and Hurley Haywood RSR, which won the 1974 Trans-Am and IMSA Championships, as well as the 1975 Daytona 24 Hours race.

Significant care was taken throughout the build to use components of the correct type for the RSR model, including high-grade adjustable H&R coilover suspension. The engine and transmission were built and calibrated specifically for this car by air-cooled Porsche specialist Supertec in California, US, at a cost of $41,700. It also has a competition specification clutch, rack-and-pinion steering, and MSD twin-spark ignition.

The car was reviewed in 2010 by the UK’s Motor Sports Association and granted an FIA Historic Technical Passport (HTP) in class GTS27. It was registered for the road in July 2011, and there is one previous keeper on the UK log book. The seller acquired the car in 2012, and has covered around 5,000 km behind the wheel.

Some 13 years after the build, the bodywork still presents in excellent condition, with no signs of any panel damage. Its Grand Prix White paint is generally in very good order, with stone chips around the rear arches and intakes, a chip on the front bumper, and small marks elsewhere commensurate with fast road driving. The 15-inch Fuchs alloy wheels have some grazes around the rims. There are cut-off switches on the scuttle panel, and quick-release pin fasteners for the front boot and engine lid.

Save for the dashboard, most of the interior was completely stripped out, and an FIA-specification roll cage was fitted. There are lightweight Recaro bucket seats, equipped with four-point OMP harnesses. Ahead of the driver is a dished Momo steering wheel, trimmed in Alcantara, while a Wevo shifter has been fitted for the 915 transmission. The interior presents well, with some wear to the lightweight carpets in the front, but all of the controls and dials work as they should.

Mechanically, this 3.0 RSR is absolutely on-the-button, having received attention by the best in the business. At 5,800 km, it was overhauled by a Porsche specialist in Cheshire, which included shuffle-pinning the crankcase, fitting Tech 9 conrods and pistons, Schrick cams, springs and retainers, and hydraulic tensioners. An RSR style exhaust was installed, along with low butterfly inlets, a new oil tank, KMI fuel pump, and RSR specification fuel lines. New MSD capacitive discharge ignition boxes were fitted, and the twin-spark system was refreshed. The MFI pump was handed over to expert Neil Bainbridge at BS Motorsport to properly set up. In total, around £28,000 was spent on this engine work.

Its previous full service was carried out by Porsche specialist Autofarm, and since then it had been given regular oil and brake fluid changes as needed. The most recent MOT test was carried out on 18 October 2017 with 4,852 km indicated on the odometer. After the rear registration lamp was fixed, it passed cleanly with no advisories. The seller states that the car is now exempt from annual testing on the basis of age.

The alloy wheels are fitted with a set of period-correct Michelin TB15 Course competition tyres, in size 215/55 R15 at the front and 270/45 R15 at the rear. The tyres were only put on around two years ago, so remain in very good condition.

Accompanying the car is a good history file with photo documentation of the shell, body, and engine build processes in 2007, and invoices for the most recent maintenance and servicing. The 2010 FIA HTP paperwork is also present, along with recent MOT certificates.

This Porsche 911 3.0 RSR Replica is a hugely impressive bespoke build, which boasts great attention to detail to ensure it is a faithful tribute to the original model. Someone starting from scratch to recreate the same car would need to spend significantly more than the reserve price, so this exhilarating road-legal racer is a great value proposition. A thrilling lightweight 911, which is very much a track-focused machine; it is an excellent candidate for historic racing or hillclimbs, and is sure to delight its next owner.

All cars and motorbikes on Collecting Cars are run through an online HPI check. This vehicle shows no insurance database markers for damage or theft, and has no finance owing.