This Porsche 935-II by DP Motorsport is an incredible ‘one of one’ bespoke 911, which was built by the same company who manufactured the bodies for the legendary Kremer Type 3 racing cars of the 1970s. It is powered by a 930-type 3.3-litre turbocharged flat-six, now producing up to 400bhp at 0.8 bar, coupled to a close-ratio four-speed manual transmission. The odometer shows 24,245 miles, which is believed to be correct. 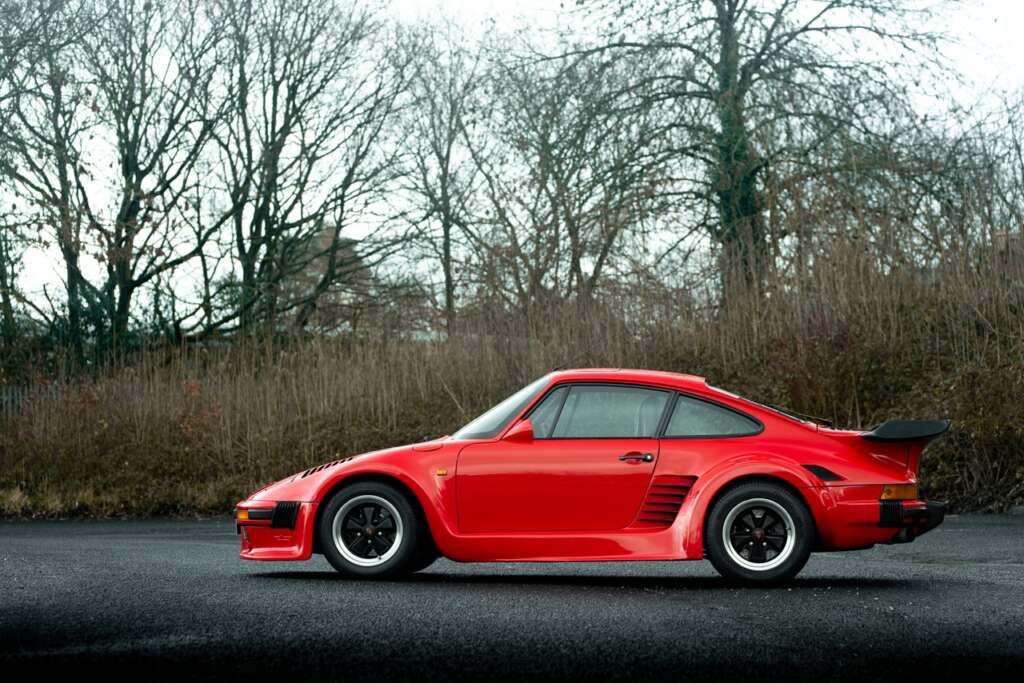 An original UK-supplied car, this particular 935-II was created by DP Motorsport to test reaction to the modified 911 in the right-hand-drive market, and was also shown at that year’s British motor show. Evidently, a decision was made not to produce any further UK examples, so this remains the sole right-hand drive car produced by DP Motorsport – a car referred to in period literature as the “road going version of the Le Mans-winning Kremer Porsche 935”.

There are just four previous keepers on the V5C, and the current owner acquired the car in June 2019. The owner before him had kept the car for around 20 years.

The most obvious modifications were to the body, where DP re-clothed the 911, comprising a reinforced steel monocoque and custom Kevlar/carbon-fibre panelling, with the only original panel left being the roof. Its revised bodywork in the ‘Flatnose’ style includes pop-up headlights, a low-rake windscreen with a single central wiper, and significantly wider front and rear wheel arches. There is also a substantial rear spoiler, reprofiled front and rear bumpers, and aerodynamic sill sections and door mirrors.

The flat-six was enhanced with competition-grade heads, camshaft, and polished ports. A stainless steel turbo intercooler and oil cooler were fitted, and the turbo boost was set at a minimum 0.8 bar. Period documentation states that this was capable of 400bhp in this tune, and up to 440bhp when adjusted to 1.1 bar. Claimed performance at launch was 0-62mph in just four seconds, and a top speed of 186mph.

Under the skin, the suspension was also uprated, and it used the standard 930 Turbo ventilated brake discs, while the wheels were swapped out for significantly wider five-spoke alloys – running 225/40 VR15 tyres at the front and 345/35 VR15 at the rear.

Today, its bodywork remains in great shape, and the Guards Red finish is believed to be the original paint applied in 1986 following the modifications. There are some very minor chips that you would expect from low-mileage road use, but overall it is in good condition. The 15-inch alloys present well, with satin black centre ‘petals’ and polished rims, and with only some small nicks around the wheel edges.

Inside, this 935-II still sports the custom DP Motorsport re-trim of the original seats, with tri-colour red, white and grey accents. The leather presents well, with some slight wear to the driver’s seat that you would expect given the car’s age, but with no unsightly damage or heavy wear – which further supports its low mileage. A period Blaupunkt stereo head unit is installed, and the large boost controller remains in place between the seats.

In the last 13 years, the car has covered less than 700 miles, having been carefully stored as part of a private collection up until 2019. The vendor confirms that the car will come with a fresh 12-month MOT certificate for the next owner. Currently, the most recent test on file was on 26 June 2019 at 24,140 miles, which resulted in a clean pass with no advisories or defects noted. Furthermore, while the car is fitted with a mix of Pirelli tyres in the photos, a complete new set of tyres will be fitted before handover.

This Porsche 935-II by DP Motorsport represents an unmissable opportunity to acquire a unique custom build, completed in period by the builder of the lightweight 911 bodywork for the renowned Kremer Racing team. A compelling blend of Le Mans racer and well-appointed GT car, this DP 935-II is the only example of its kind to exist in original right-hand-drive format, so it will undoubtedly appeal to thrill seekers and die-hard marque collectors alike.