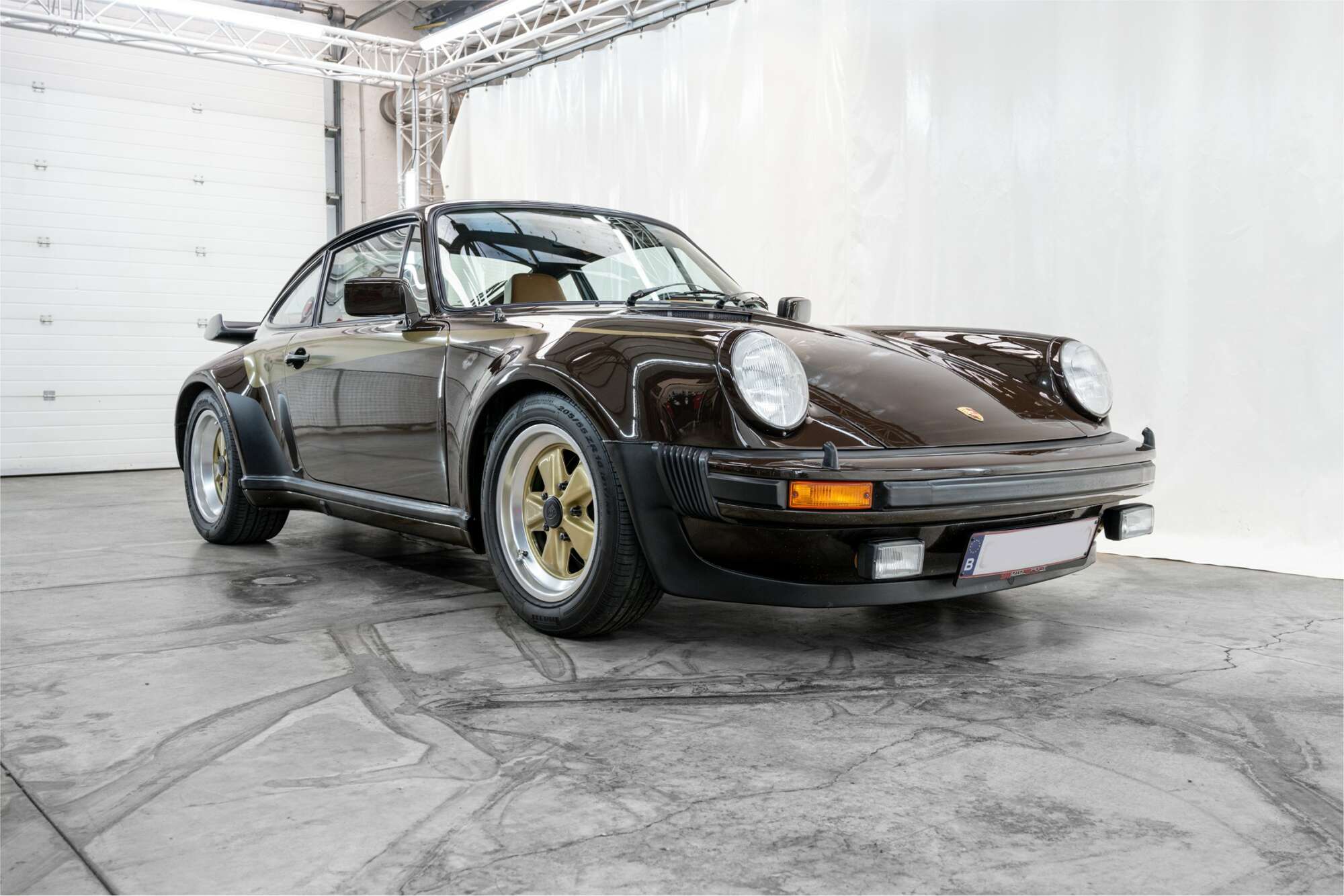 The car does look great in its Mocca brown body colour, combined with the period correct Turbo striping in Gold.  The actual owner decided to paint the stars of the Fuchs wheels in the same shade of gold (Comet Diamant metallic).  As a personal touch the turbo logo on the rear decklid was also painted in the same tint of gold.  This combined with the cork leather interior, as well as cork-coloured carpets, does give the car an outstanding and period correct look. 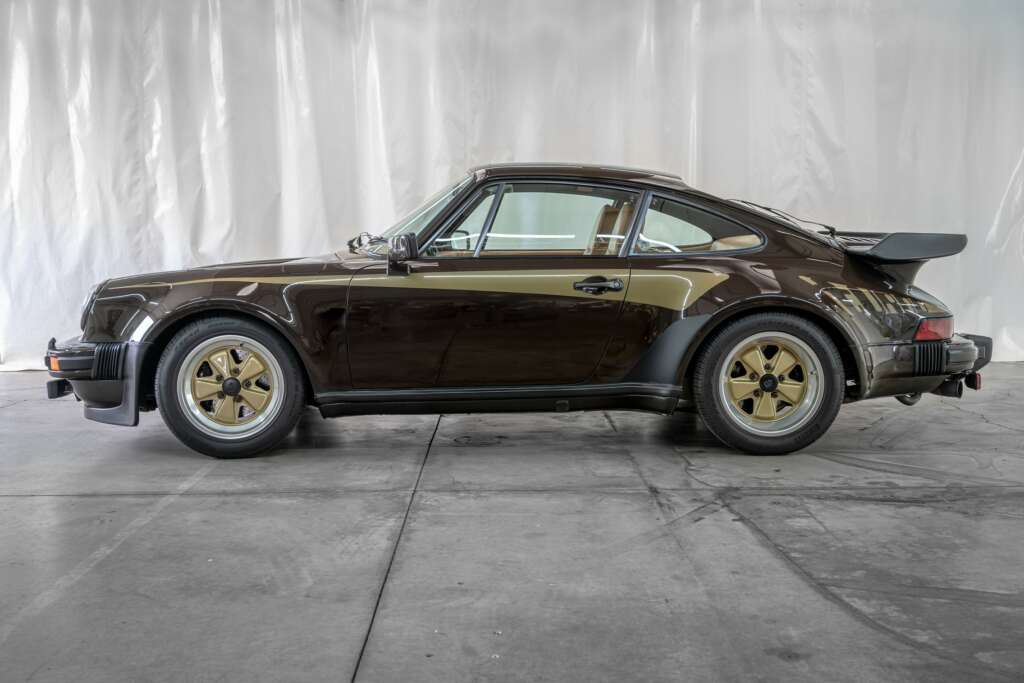 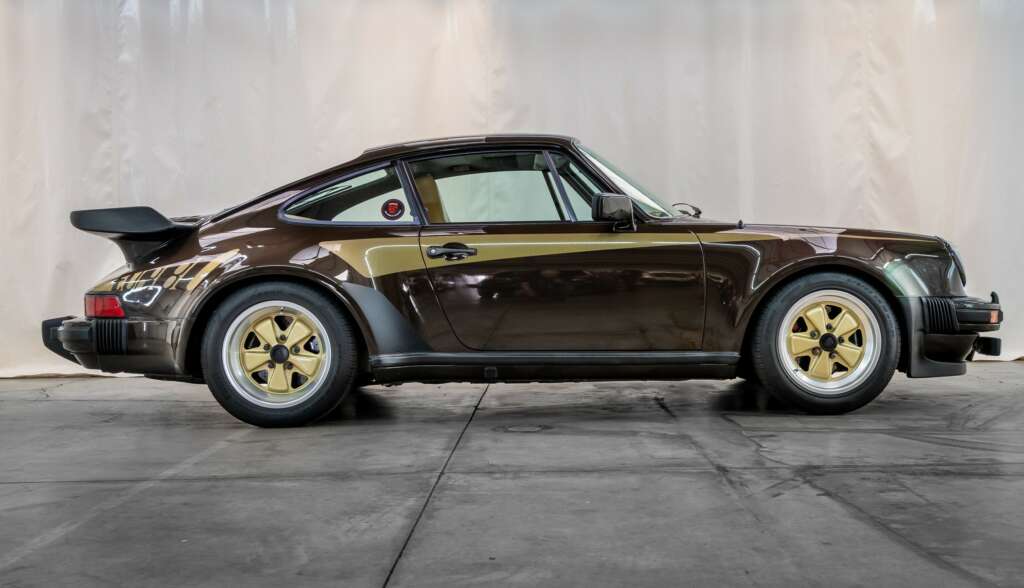 When the actual owner acquired the car, he had the “911motorsport” outfit service the car.  This meant new tires, stabilisation bars, new rubbers bushings on the suspension, overhauling the brakes, corner balancing and chassis alignment.  The engine and gearbox were serviced, oil, sparkplugs, filters etc…were changed.  Nothing was left out, as the car should perform and drive the way it did when coming out of the factory.

Although officially the US Turbo engine’s (930/61) had an output of 261 bhp instead of the ROW 300 bhp, this Turbo does feel much more potent than the 261 bhp one might expect.  Having had quite a lot of Turbo’s in the workshop and in the collection, we can say that without doubt this engine performs as do the ROW Turbo engines.  It seems clear that some previous caretaker did take the effort to make this particular Turbo shine, not only in looks but also in performance.

The car shows 37.185 km, believed to be correct. The air-conditioning in this car is complete, but the compressor has been taken out.  It does of course come with the car.

Take the chance to pick up this Turbo.  Prices of early Turbo’s in good, original condition, with a particular exterior/interior look, and with relative low miles/km are going up rapidly.  The Turbo’s are back in the “price lift” so do not miss out on this one.

The 911 Turbo, internally code named 930 was introduced in Paris late 1974.  Little did Porsche know that there would be an oil crisis around the corner when they started their Turbo project.  When the oil crisis hit most people, at the time, did not understand the move but the Turbo project was already launched.  People were starting thinking about “saving fuel” instead of gas guzzling cars.  The Turbo was to become the top of the line in luxury specified 911.  At the time nobody knew the Turbo soon was to become an icon and a supercar in its own right.

The first cars had 3.0 Litre engines with a rather big single Turbo.  Their engine had a bhp output of 260 bhp but more importantly the power came on as a rocket in between 3.500 and 4.000 rpm.  The car was very difficult to master and i am sure lots and lots of the first generation 930 got crashed.  The Turbo got the nickname of “windowmaker” as lots of especially young drivers got injured or died.  Because of its Turbo lag the car still moved forward when gas was lifted, and it took a while before the Turbo spooled up to speed to give pressure and thus suddenly power on the rear wheels.  Lifting in a corner was a “life threatening” experience, as well as acceleration too forcefully and to early especially on winding roads.

The second iteration of the famous 930 came in 1978.  Porsche enlarged the engine capacity to 3.300 cc and added a cooler on top of the engine.  This cooler was meant to cool the pressurised air from the turbo compressor, as the temperature of the intake air was lower combustion and thus horsepower improved.  The leap in horsepower was not enormous but by having 40 bhp more than the original 260 meant an increase of 15 %.

As the Turbo was the “top of the line” it was, for a sportscar, luxuriously equipped.  The interior did receive a full leather treatment and the carpets were plusher and boarded by a leather stitching.  Most cars were equipped with air-conditioning. 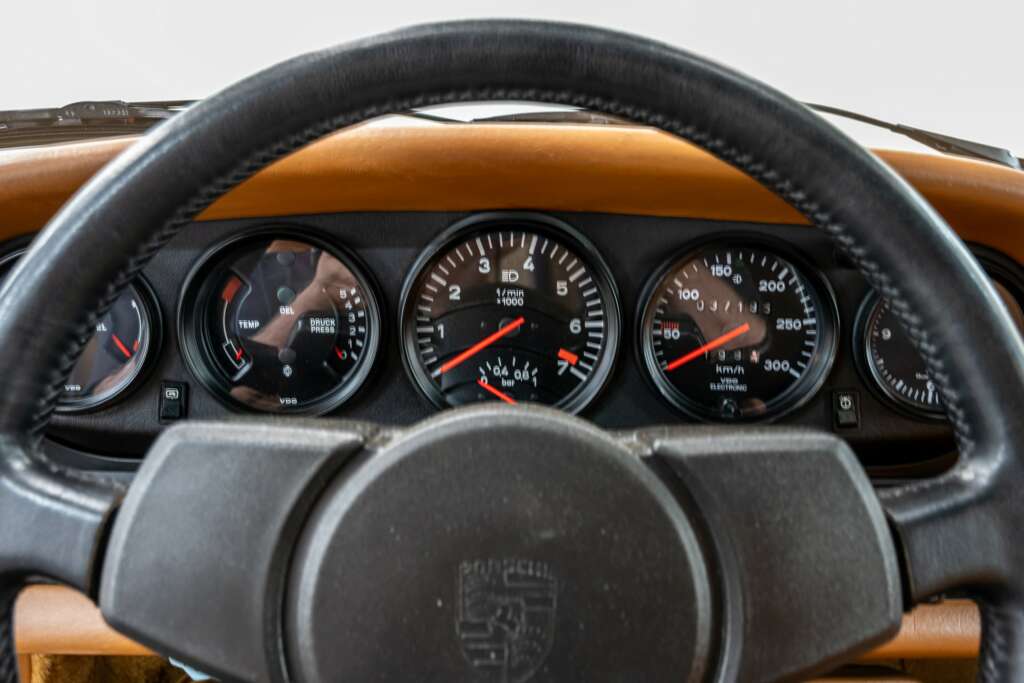 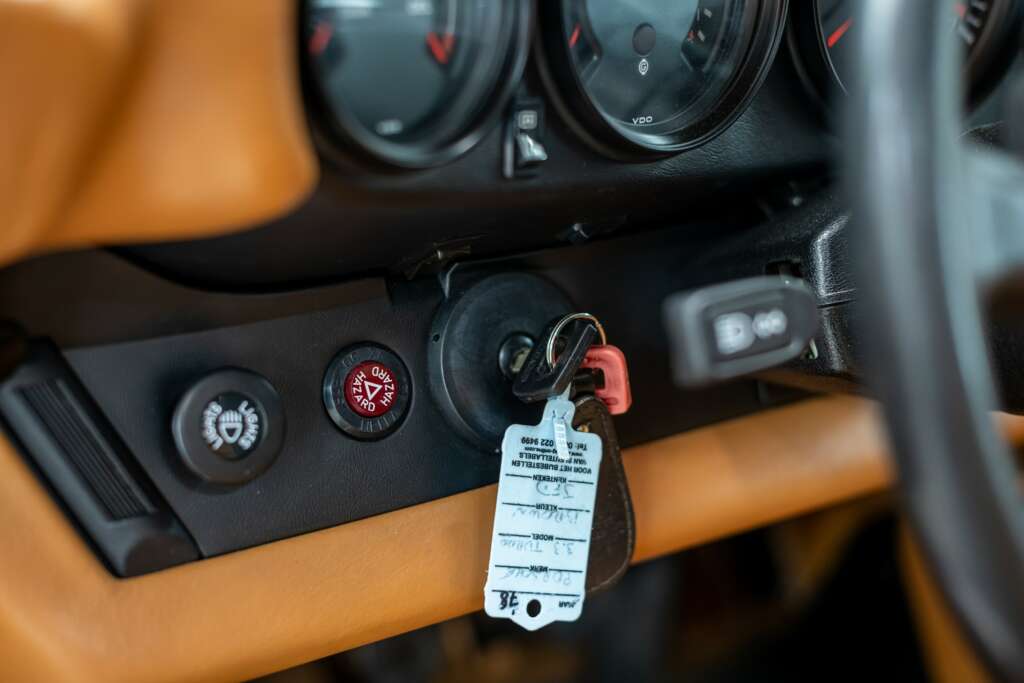 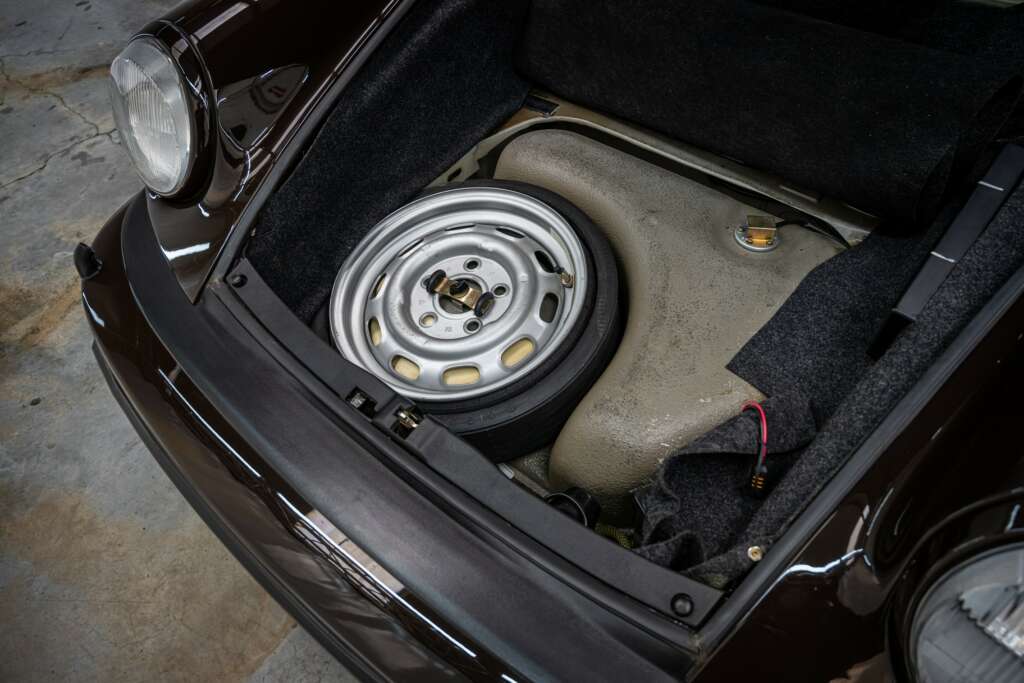 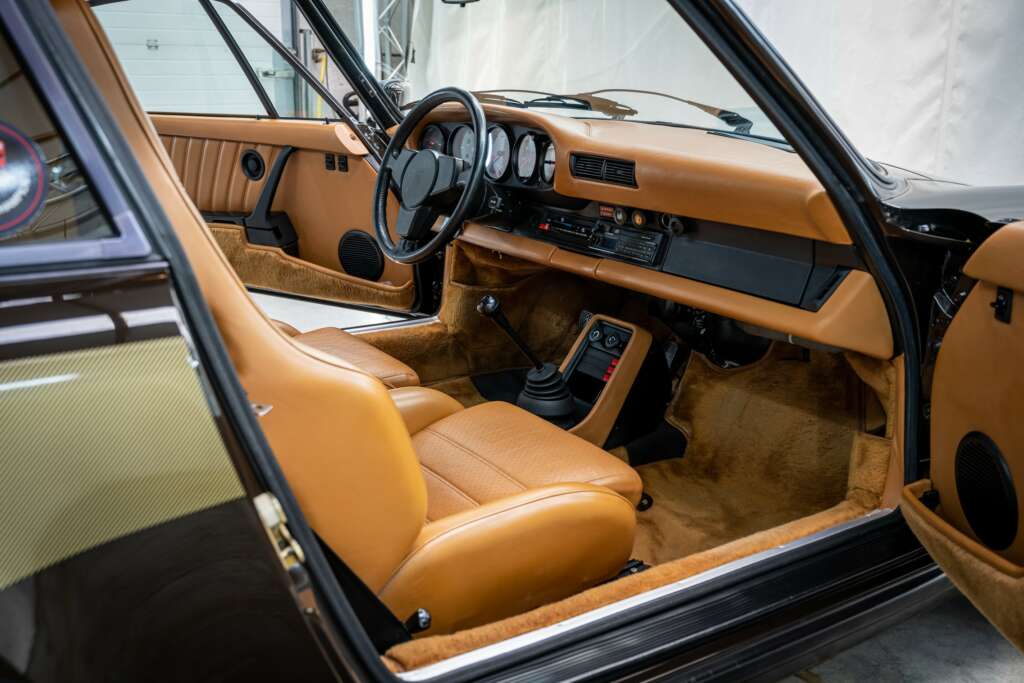 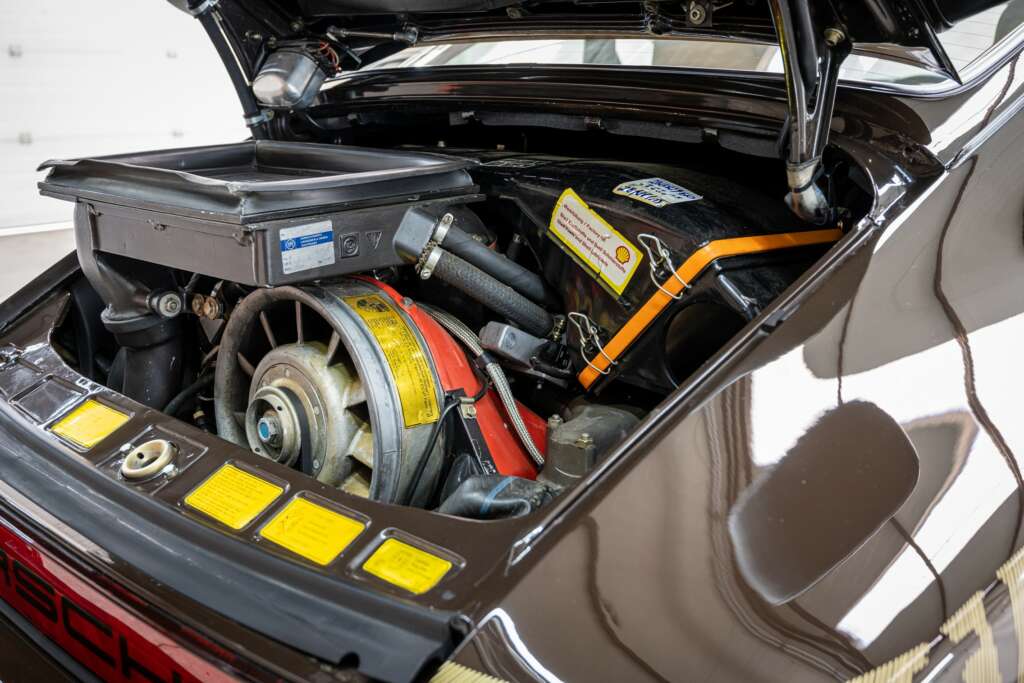 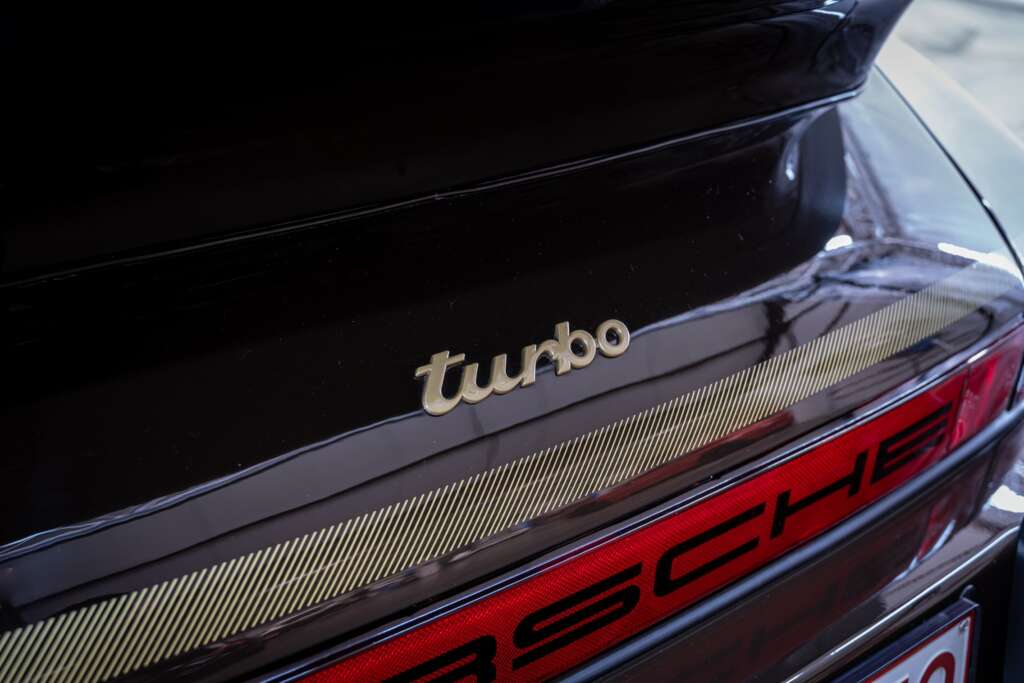 Johan-Frank Dirickx looks forward to your questions and is happy to help you.