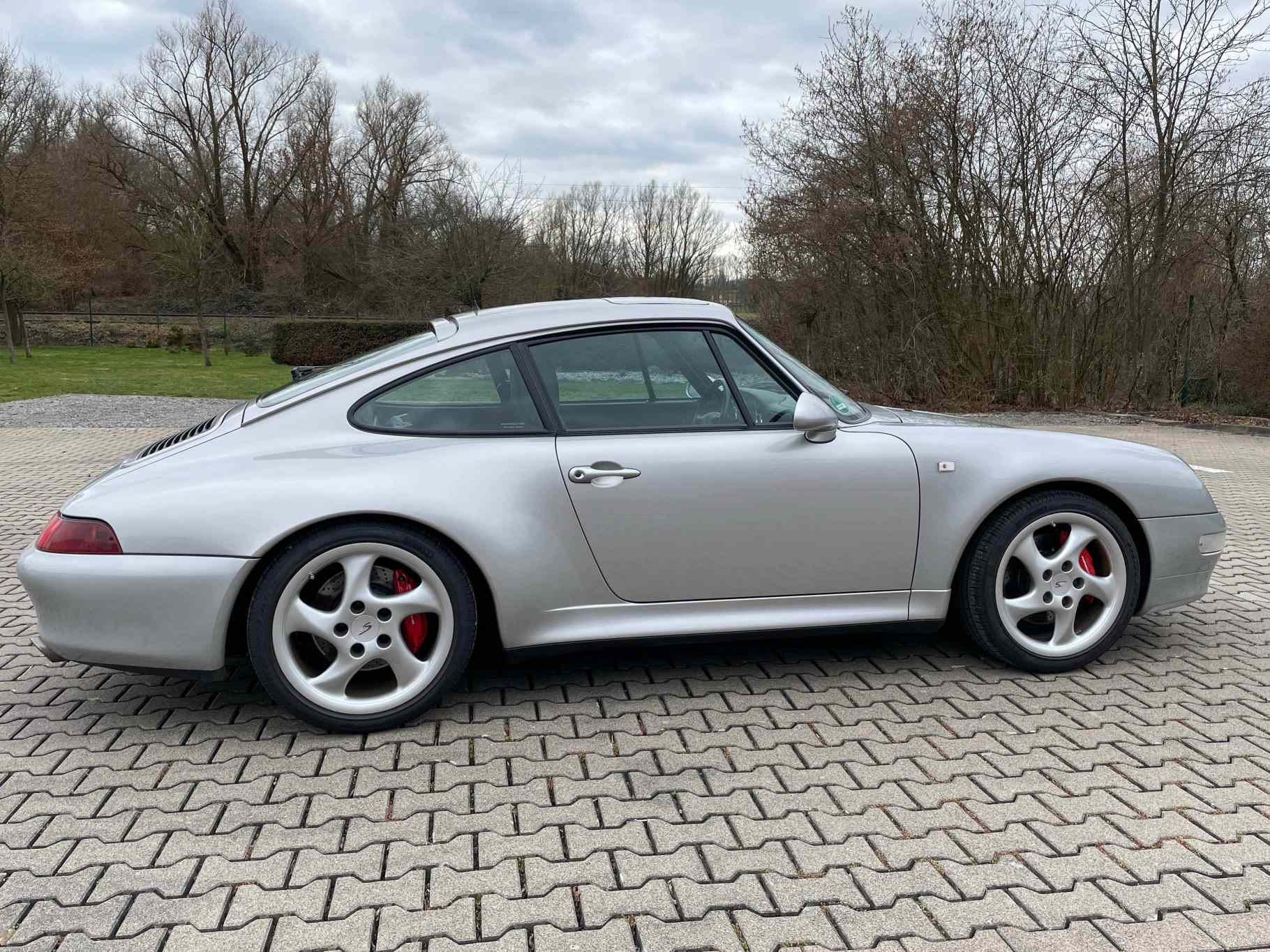 This 993 4S is a splendid specimen of its kind: A German vehicle with low mileage and few previous owners, who always benefited from care and maintenance in order to keep it in very good condition. A 1997 Porsche 911 Carrera 4S is on offer in excellent condition with a complete service history. The Porsche is a German vehicle (country code C00, factory delivery in Stuttgart) and only had two owners. There are three entries in the letter, but at the time of the first owner there was a description without a change of ownership. The 993 has been in current hands for ten years and the current mileage is 122,490 km.

For many purists, the 993 is the last real 911, as all subsequent models no longer rely on air but on water cooling. So it has the final evolutionary stage of the air-cooled boxer six-cylinder. The advanced development is noticeable in many ways: On the one hand, the engine is more powerful than its predecessor, on the other hand, it is also less prone to defects and cheaper to maintain, mainly due to the use of hydraulic valve lifters, which makes costly valve adjustments superfluous.

The 4S is a particularly desirable model in the 993 series. It shares with the turbo the widened body including the front apron, the wide sills and the rims. The main optical distinguishing feature is the lack of the fixed rear wing of the Turbo, in which its intercooler is housed. The 4S has the automatically extending rear wing of the normal model. The 4S can also benefit from the turbo technology under the sheet metal: it receives the more powerful braking system with red-painted brake calipers.

The 3.6-liter boxer six-cylinder with Vario-Ram intake has an output of 286 hp, which is distributed to all four wheels via a 6-speed manual transmission. Depending on the slip, up to 40% of the drive torque is sent to the front wheels. A limited slip differential is installed on the rear axle.

The body is painted in elegant arctic silver metallic (92U), which is still in extremely good condition. The 993 is not entirely free of repainting, the front end was painted up to the doors for cosmetic reasons. However, there are no differences in color. A long time ago the 911 had a minor body damage; the left fender and the front apron were damaged in the process. The damage was professionally repaired in the Porsche center. The wide rear fenders, which are predestined for stone chips, are protected by a transparent film.

There are hardly any paint defects, the top coat is only damaged in the lower area of the wheel arch edges behind the front wheels, but the primer is still intact. Another scratch can be seen on the underside of the front apron. Both can be viewed in the gallery. This 993 has no rust, even the vulnerable A-pillars were inspected when the windshield was replaced and found to be good.

The 993 is on the original 18 ”rims, which only differ from those of the turbo by the 4S emblem on the hub caps. The rims are fitted with Pirelli PZero Rosso tires from 2017, which still have a lot of residual tread. The dimensions of the tires differ on both axles; the front axle wheels carry 225/40 ZR18 and the rear axle 285/30 ZR18. The rims are in very good shape, only one rim has a scratch about two centimeters long on a spoke (gallery photo available).

Like the body, the interior is in excellent condition. Here, too, the first owner opted for timeless aesthetics; the black interior harmonises well with the silver exterior. The seats were ordered in ruffled leather (subject to a surcharge) and are heated. The only lightly patinated seats have only one spot on the front left edge of the seat where some wear can be seen; the rest is impeccable.

The classic 911 dashboard with the characteristic five round instruments, switches and carpets are also free of flaws. There are no defects to report, the air conditioning also cools as intended. The radio was replaced a long time ago by a Becker Traffic Pro with navigation especially for Porsche (with Porsche logo on the display after switching on; CDs with map data are included). A mobile phone holder with a matching Nokia phone is also installed as a contemporary accessory.

The technology is in perfect condition. According to the seller, the weak point of the 993, oil incontinence, is not present in this copy. In addition to the regular service, all suspension struts were recently replaced by Bilstein ones (model? ABE?) And the tires renewed. The last general inspection from March 2019 was free of defects and gives no indication of any defects. The vehicle is sold with a new, defect-free general inspection and a fresh service from a Porsche specialist.

The car is fully serviced and all entries come from Porsche centers or Porsche specialists. Invoices are available for all work that falls within the ownership period of the current owner.

Even among the already coveted 993s, the 4S is one of the most popular models. All-wheel drive and technical improvements of the Turbo paired with its muscular body exert stimuli that Porsche fans can hardly resist. This 993 4S is a splendid specimen of its kind: A German vehicle with low mileage and few previous owners who always benefited from care and maintenance in order to keep it in very good condition. 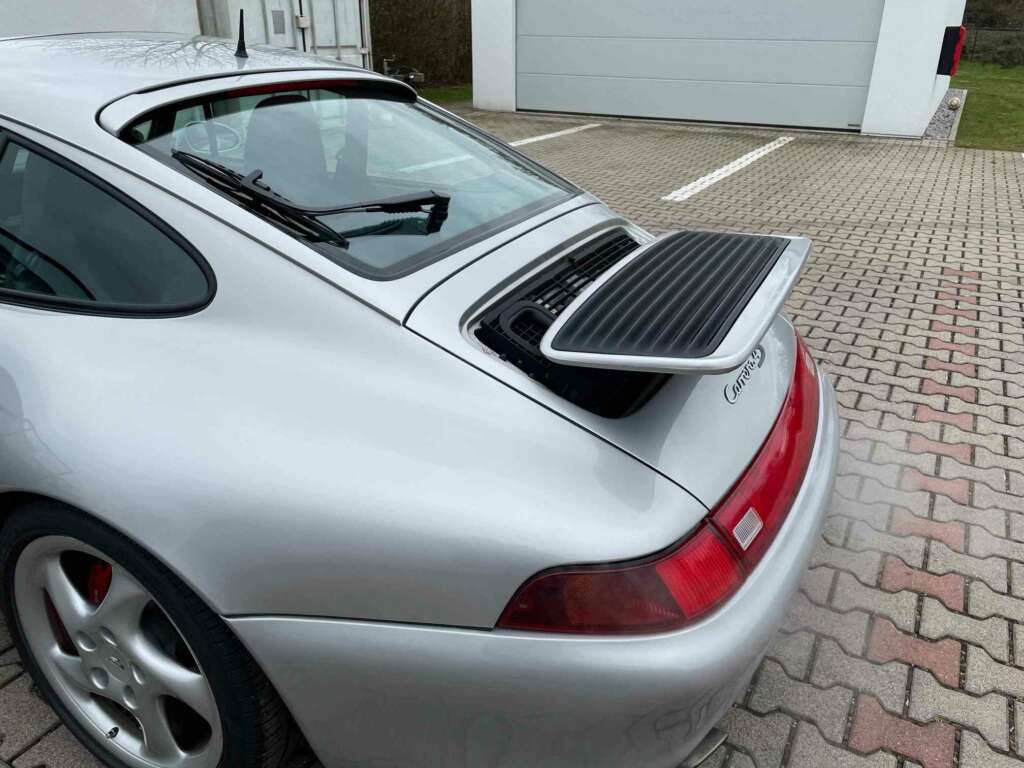 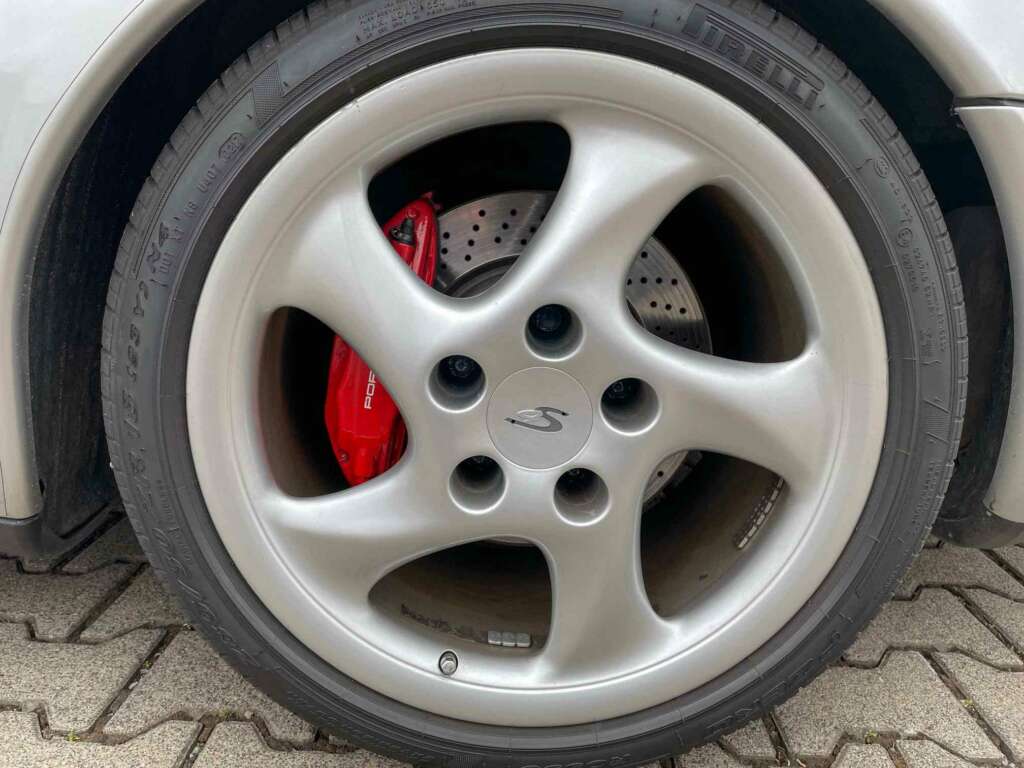