UK-supplied to the first of just two owners covering 9,130 miles between them and serviced only at Porsche main dealers.

A facelift Carrera 2 supplied by HR Owen Hatfield in Arctic Silver to the first of just two registered keepers – With a larger 3.6ltr engine than the earlier 996 model with updated lights and bumpers – Aluminium touches on the handbrake lever and Tiptronic selector as well as Porsche-branded stainless-steel door entry guards. The odometer reading of 9,130 miles (atoc) is complemented by a service history at only Porsche main dealers – The history file includes purchase paperwork, correspondence and invoices totalling more than £6,000 – The original owner’s book pack also accompanies the car, including PCM manual, tracker handbook and Porsche assistance handbook – Presented to auction with a fresh MOT, two keys, aforementioned detailed history file and now ready for its next adventure. The 996 is the internal designation for the Porsche 911 model manufactured and sold between 1998 and 2005. On its debut, the 996 featured the most significant changes to the Carrera model since its 1963 introduction, namely the water-cooled engine replacing the previously air-cooled unit. Progressively stringent noise regulations, environmental concerns, a higher expectation for refinement and a high-performance, four-valve per cylinder engine made the switch necessary. Other changes included a sleeker body with a more steeply raked windshield and a redesigned interior. The performance characteristics remained superb with reliability at its core.

The Frankfurt Motor Show in September 2001 bought the most significant changes to the 996. In

addition to a more powerful 3.6 litre engine and styling changes to the existing model range, there

were two new models – the C4S and Targa. Visually, the main change to the Carrera 2 and 4 was to the front wings and lights, incorporating those from the Turbo model which was introduced in 2001. This gave it a noticeably different front-end look to the Boxster, as it was a common comment that they looked too similar. The front and rear bumpers were modified to give a ‘skirt’ effect around the bottom edges, giving them a slightly more aggressive appearance. Engine capacity was enlarged from 3387cc to 3596cc and there was a resulting power increase from 300bhp to 320bhp at 6800rpm. Maximum torque was up from 258ft/lb at 4600 to 273 ft/lb at 4250

Supplied by HR Owen Hatfield in Arctic Silver with black leather interior to the first of just two registered keepers who between them have covered some 9,130 miles, at the time of cataloguing, and returning to Porsche main dealers for servicing.

The options codes confirm the following:

Presented to auction with a fresh MOT, two keys and aforementioned detailed history file, this timeless sportscar releases the driver’s left foot from duty, providing effortless performance from the Tiptronic gearbox mated to the bombproof Porsche 3.6-litre engine. Finished in classic colours and ready for its next adventure. 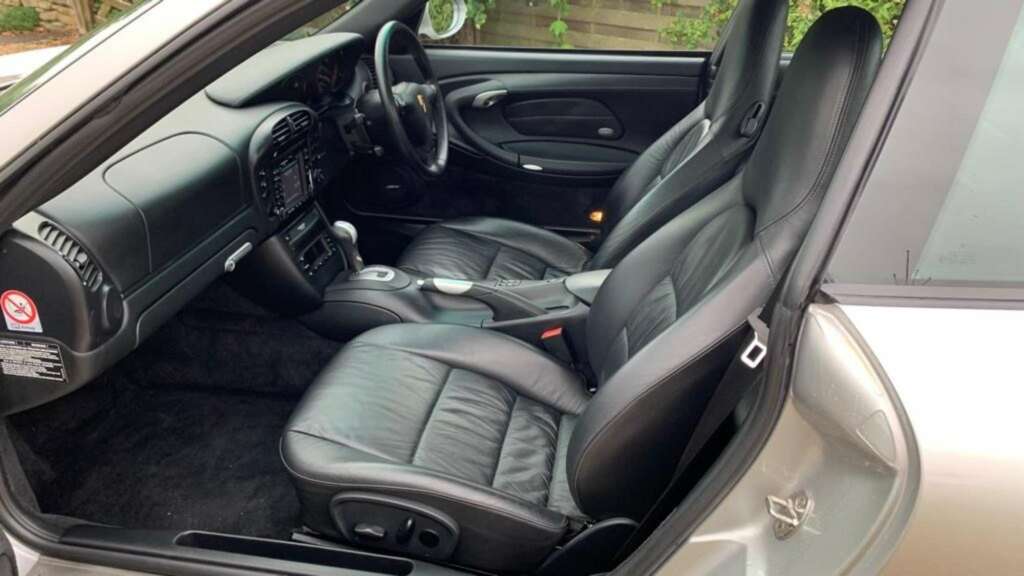