This Porsche 996 Carrera 4 is an original and unmodified example of a wonderfully usable modern classic, which boasts a smart colour scheme and a high factory specification. Under the engine deck lid is a 3.4-litre naturally aspirated flat-six engine producing 300hp, with all-wheel drive via the five-speed Tiptronic S automatic transmission with shift buttons on the steering wheel. The odometer shows just 65,009 miles.

Despite being a UK specification right-hand drive car, this 911 was originally ordered through and supplied by Porsche dealer Pon’s Automobielhandel in the Netherlands. It was handed over on 28 August 2001, and was re-registered in the UK six days later on 3 September 2001. There are only four previous keepers on the V5C, and it has been with the current trade owner for two months.

Its sleek bodywork is in excellent condition, and is not believed to have ever suffered from any accident damage. Furthermore, the Lapis Blue paint is also believed to be entirely original, presenting with just some minor stone chips on the front bumper, bonnet and trailing edges of the doors; though nothing significant, and perfectly commensurate the age and low mileage. All of the body trims are present and correct, including the original and rare rear parking sensors, and the 17-inch five-spoke alloy wheels are in great shape.

Inside, this 996 Carrera 4 was specified with electrically adjustable comfort seats, upholstered in full Graphite Grey leather. The trim remains in good condition overall; showing just minor scuffs on the driver’s side outer bolster, and no heavy wear or significant discolouration. There is some wear around the gear shifter and steering wheel that is to be expected, while the latter also includes the shift buttons for the Tiptronic S transmission option.

Other equipment includes climate control, the PCM media system and even the original phone handset. Heated seat buttons are present, but the function is inoperative – though the vendor believes it is likely just a faulty fuse, and will endeavour to fix this during the auction. Otherwise, there are no known electrical faults. The sunroof works as it should, and in the front bonnet is a CD changer for the PCM system.

The last scheduled maintenance was carried out in August 2020 at 64,258 miles by Porsche specialist Walker’s Autotech. This comprised a major service, with renewal of the engine oil and filter, spark plugs, brake fluid, air filter and pollen filter, plus a full visual inspection of the transmission, driveshafts, engine mounts and exhaust system.

In November 2019, Walker’s replaced the front strut top mounts and bearings, the rear shock absorbers, rear ‘tuning fork’ arms, and both the front and rear ‘coffin’ arms. In July 2018 the car had a minor annual service, which also included replacement of the drive belt.

Prior to this, in 2017, the car’s IMS bearing – a notorious component on the 996 – was pre-emptively replaced by Walker’s with an EPS uprated oil-fed bearing. At the same time, the Tiptronic transmission was serviced, a new water pump was fitted, and various engine and exhaust gaskets and seals were also renewed.

Its most recent MOT test was on 21 August 2020 at 64,259 miles, which it passed with only two advisories for slightly cracked tyres, and with the handbrake mechanism requiring adjustment. Three days earlier, it had initially failed on one worn outer drive shaft rubber boot, and the fuel cap seal was also starting to perish. The handbrake mechanism, drive shaft boot, and fuel cap issues were all rectified by Walker’s as part of the August 2020 service.

All four tyres have around 4-5mm of tread, though as the MOT advisory notes, they are showing some initial cracking, so would benefit from being replaced.

Accompanying the car is the original driver’s manual, PCM booklet and service record, as well as various bills and receipts from Porsche dealers as well as Walker’s Autotech – the most recent of which are shown in the gallery.

This Porsche 996 Carrera 4 is a great example of the all-wheel drive 911, which has a desirable factory specification, and benefits from extensive recent maintenance – not least of which to prevent any potential IMS issues. Its automatic transmission makes it a relaxing GT for longer road trips or even the daily commute, while the Tiptronic S buttons give more control to the driver. Presented in very good order, this is an eminently usable 911 and an impressive modern classic.

Tiptronic S transmission
Headlight washer
Rear wiper
Electrically adjustable front seats
Lumbar support for front seats
Top-tinted windscreen
Rear parking sensors
Sunroof
PCM media system
DSP inc. sound system
Phone handset for PCM
CD changer
The description of this auction lot is, to the best of the seller’s knowledge, accurate and not misleading. Collecting Cars requests a range of detail about the lot from the seller, and performs a level of due diligence. However, bidders must satisfy themselves as to the accuracy of the description, and conduct any research they feel is necessary before committing to a bid. Please see our Terms and Conditions for full details. 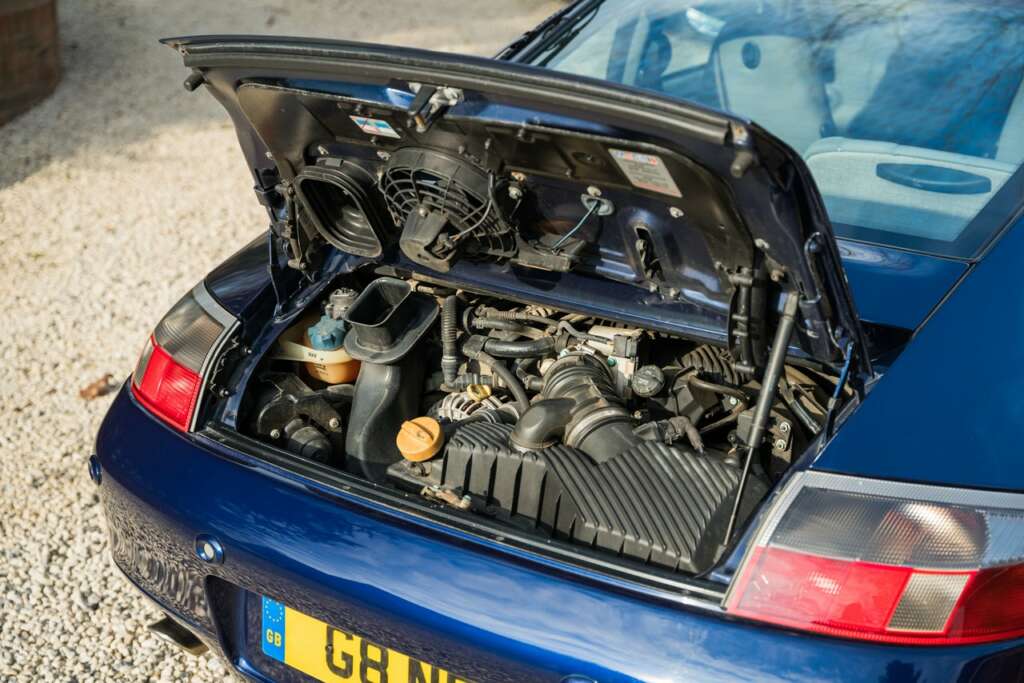