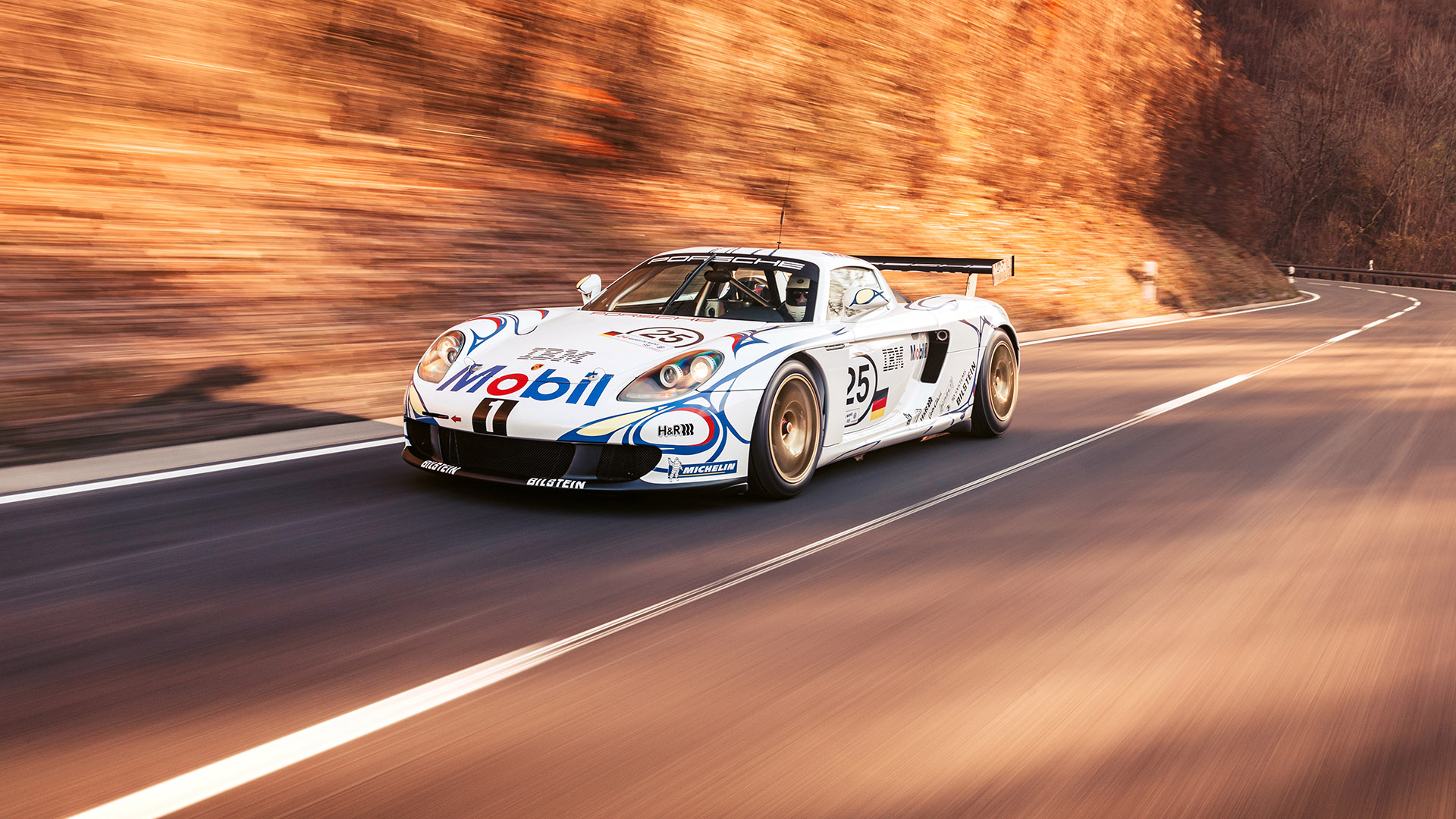 The Carrera GT-R offered here returns to its roots. This car was delivered brand new to Belgium in 2005, where its owner at the time had specific plans. For example, he had a one-off piece made by the company GPR, unlike any other in the automotive world. In addition to the purchase price of the Carrera GT, the conversion costs amounted to over 220,000 euros. The task at GPR was ambitious, so nothing less than the world's fastest Carrera GT should be built for the racetrack. This was achieved, among other things, through the use of a Motec control unit, new, tailor-made wishbones and tie rods, as well as a new brake system from AP Racing. In addition, new pedals, a completely integrated air lift system according to motorsport standards and a special high-performance clutch were installed. In addition, there were custom-made products from Thiebaut in the form of a safety cage, as well as magnesium rims from BBS, an automatic fire extinguishing system and a fuel system according to motorsport specifications. The owner at the time had specific plans for the Carrera GT, so he wanted to use the car in the endurance world championship, but this was prevented by the rules, as the so-called "Balance of Performance" made it impossible to adjust it due to the massive performance of the car. Thus, the owner's plans were dashed and the Carrera GT-R remained unused in his collection. This unique Carrera GT-R is one of the most exclusive ways to scare the competition on the next trackday, as it was ultimately developed for precisely this purpose 20 years ago.

It was before sunrise in the early morning hours of September 28, 2000 when Porsche presented the Carrera GT study to the world press in Paris. Walter Röhrl was at the wheel of the new super sports car. He drove the V10 mid-engine racing car over Place Charles-de-Gaulle, which is better known as Place de l'Étoile because its cobblestones form a star from which the Arc de Triomphe rises. Röhrl had the job of bringing the sheer power of the engine fairly cleanly over the rear axle onto the wet and slippery pavement of the square on this rainy morning in front of the eyes of the international media. The two-time rally world champion mastered the matter with ease: the pictures of Röhrl in the open Carrera GT on the way from the Arc de Triomphe to the Louvre, escorted by French motorcycle police officers, went around the world as an automotive sensation. With this study, Porsche defined the new status quo for sports cars and pushed the boundaries of what is feasible. From then on, children hung the study poster in their rooms and some parents simply wanted to order it. But it didn't exist. Porsche still had to finish developing the Carrera GT and then finally build it somewhere. Because in 2000 this sports car was nothing more than a bold vision, created from the modules of a new racing car that was actually supposed to drive for victory in the 24 Hours of Le Mans. Which is why the decision was made not to return to Le Mans for the time being. This gave rise to the idea of shaking up the sports car world with the technical fillets of the 9R3. This was followed by the development of the study shown at the Mondial de l'Automobile in Paris. There were various reasons why another two and a half years passed before the serial version debuted at the Geneva Motor Show in 2003. One of them was the aerodynamics: The look of the production version should not change any more compared to the study. A sophisticated aerodynamic concept therefore had to be developed in order to press the production car, which would later reach 330 km / h, safely onto the road. Only the electrically extendable rear wing is visible. In addition, however, the entire carbon underbody is covered; Together with a rear diffuser, the underbody geometry creates a ground effect like that of a racing car, which literally sticks the car onto the road. The greatest challenge, however, was the manufacture of the monocoque chassis and the subframe – for the first time in a series-production Porsche, both were made entirely from light, but high-strength CFRP. For this purpose, Porsche set up its own manufacturing facility in the new Leipzig plant in 2003. In addition, there were other subtleties such as seat shells made of Kevlar and thus also very light, ceramic brake discs, double wishbone push-rod axles (separate guidance and suspension) and the world's first two-disc dry clutch made of ceramic. With a disc diameter of 169 millimeters, this heavy-duty clutch is particularly compact and thus enables a very low center of gravity to be achieved for the V10 and the 6-speed manual transmission. Compared to the study, the displacement was increased from 5.5 to 5.7 liters and the power to 612 hp. The point is, that power hits only 1,380 kilograms – 2.25 kilograms per horsepower. The circuit is very precise; The high-level beech plywood shift knob sits perfectly in the hand – a wonderful detail from the early days of motorsport and a subtle indication that the Carrera GT has remained essentially a racing car despite being street legal. And that is exactly what makes this Porsche so incomparably fascinating. 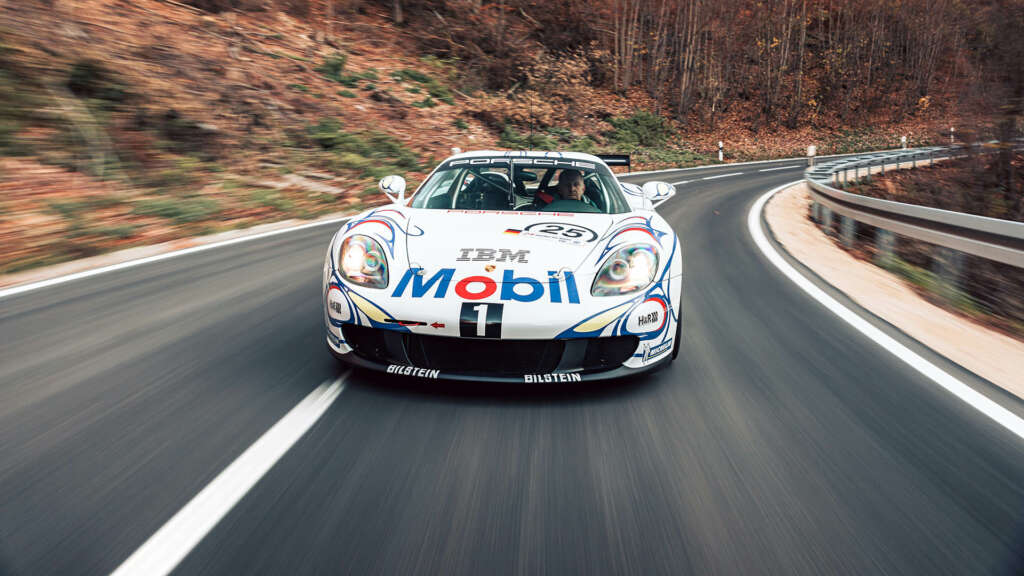 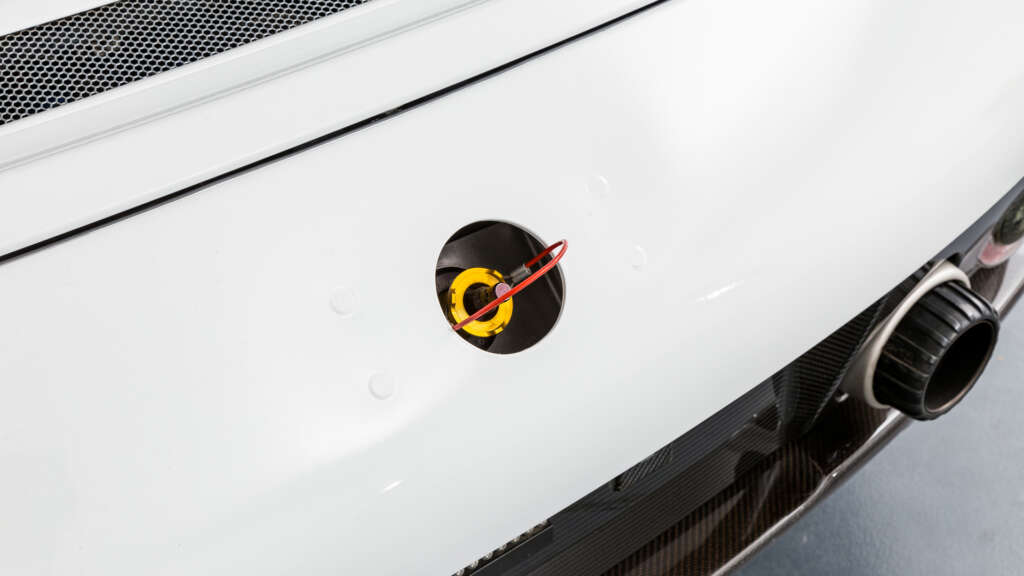