The “Cayman Cup” Cayman S, chassis no.WP0ZZZ98Z7U772786 comes from the cars chosen for the Saottini Collection. It has only driven 4000 km and features the livery of the Porsche Brescia Center. The car, in addition to the original Toora kit, is equipped with a bucket seat for the passenger. The car, given its comparatively undemanding power, highlights, above all, the driver’s ability, relying above all on agility and driving precision. It is a fun car, with excellent road holding, the racing exhaust allows fans to fully enjoy the car. From a technical point of view, being the same as the road one, except springs and shock absorbers, it does not entail excessive costs for maintenance and spare parts unlike a typical racing car. The car is equipped with all the “streetable” spare parts including : 1 exhaust terminal, 4 mufflers, 2 shock absorbers, standard interiors. It was registered on 31-12-2008 (previously used only on the track) due to expiry of the homologation certificate.

The Porsche Club Italia, in 2007, organized in parallel to the Carrera Cup Italia the Cayman Cup, dedicated to the Porsche model with centrally mounted engine; it was a success with all participant places filled in advance. 30 Cayman S were set up, in strictly pastel colors: white, black, yellow or red. In March 2007, the first yellow specimen went to the track on the Monza circuit. With Walter Voulaz driving, it completed 40 laps of the track without detecting any problems, neither to the engine nor the braking system.

The season started on the Mugello circuit on 25 March and continued with six stages on the major Italian circuits, plus an event on the track at Le Castellet, in France. The 2007 championship included one-hour races and a formula of penalties with ballast and time, with two categories for the competitors: absolute and over 40. The car is strictly derived from the road model, chosen to reduce the costs of the championship, making it accessible to a wide range of drivers. All the Cayman S were equipped with a kit for the interior of the Italian Toora which includes: cage rollbar, race seat, belts and steering wheel, the rims are 18″magnesium from OZ Racing. The only changes to the set-up allowed by the regulation are the shock absorbers and springs, replaced with those specific by the German Bilstein. The tires are Pirelli P Zero Corsa racing tires, in dry and wet versions; the regulation provided for a maximum of 14 car tires. From a technical point of view, the engine remains the standard one, type M97/21; the only change permitted by the 2007 regulation was the replacement of the air filter. Even the braking system remained that of the road car. The Cayman Cup set-up includes a custom race exhaust system, excluding collectors and catalytic converters which are standard; for the transmission the standard gearbox is adopted, only the clutch disc could be different. The bodywork remained the same as the road model; the only exception allowed were air vents for cooling the brakes made in the housing of the front fog lights.

Italian registration and plates in order. 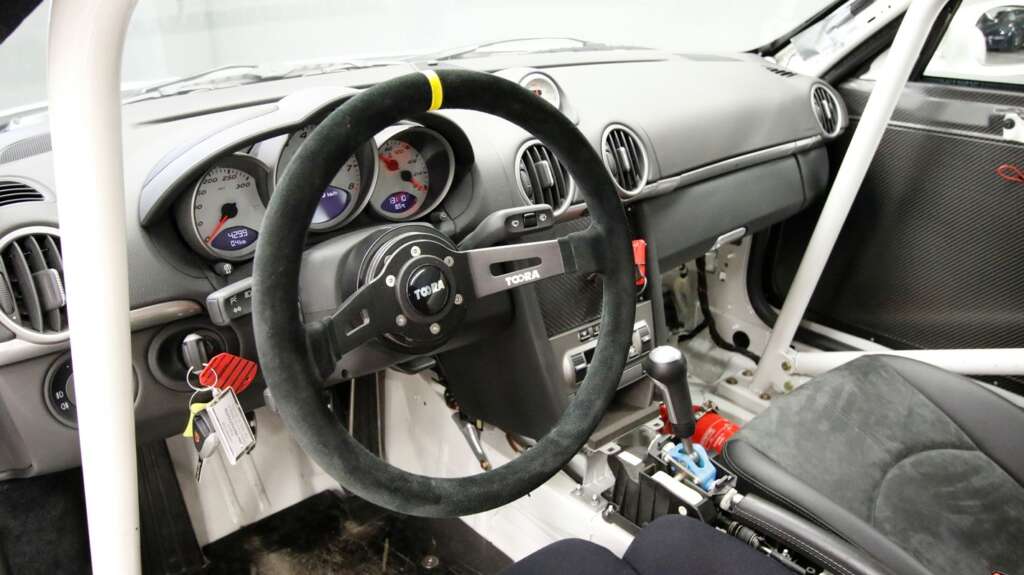