Boxerbrunch – rather inclusive than exclusive! 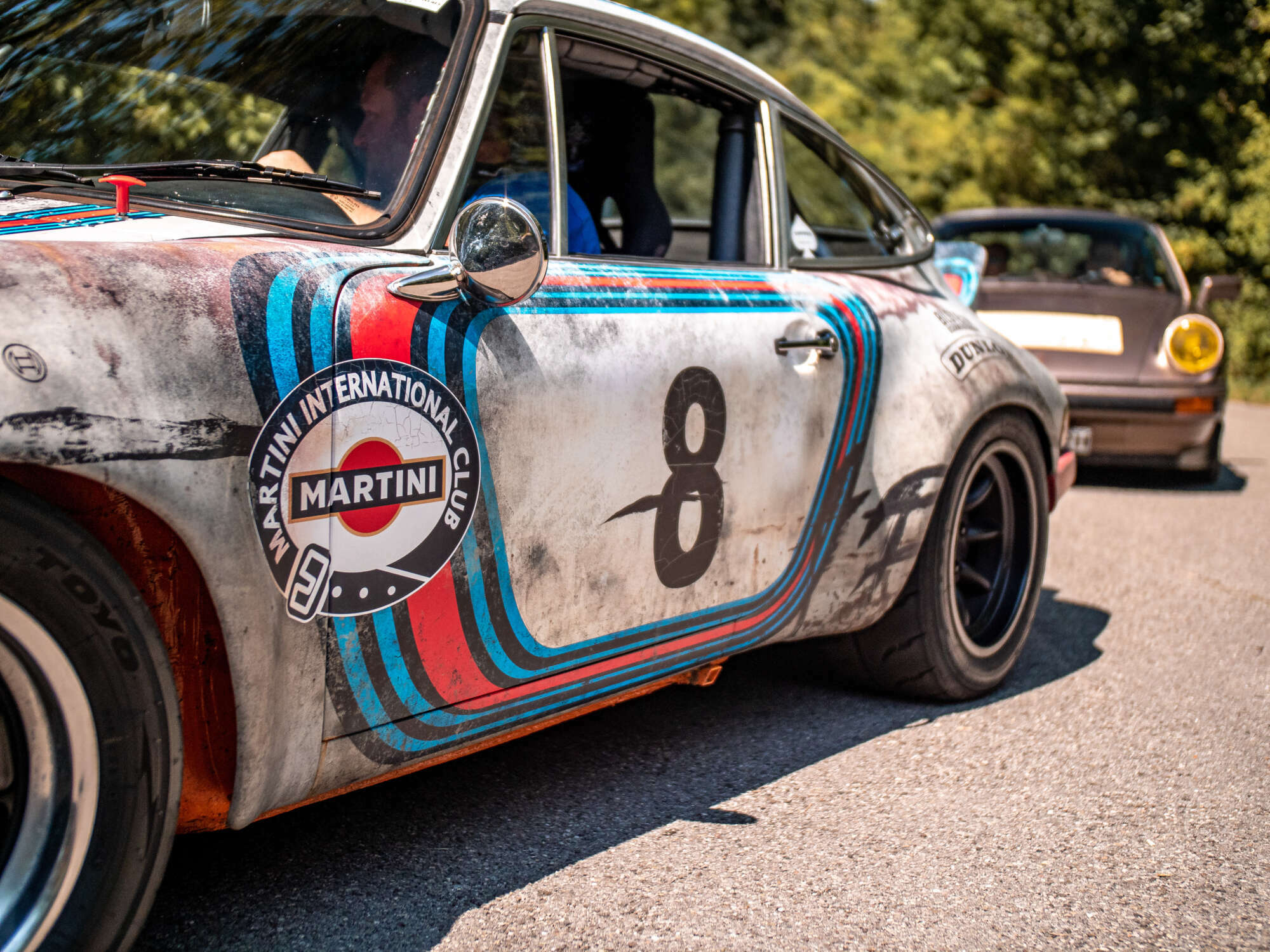 We at Elferspot Magazine are constantly looking out for interesting, exciting or even unusual Porsche stories. True to our motto “We connect enthusiasts”, we want to look behind the windshields of our beloved Porsche sports cars together. We want to get to know the people who drive them. This time we were able to talk to Boxerbrunch initiator Johannes Geissler about how he discovered his love of the Boxer engine and what sets the Boxerbrunch apart from your average cars & coffee gathering.

The name of the event in the factory district of eastern Munich was the program in 2018 and still is. The exhibitor and participant vehicles of the “Luftmuc”, the first European offshoot of the American air-cooled event series, were clearly marked by the favored cooling variant of the organizers. Its location, just to the 70th birthday of the sports car manufacturer, perhaps rather sporadically chosen. Luftmucs’ numerous participants, on the other hand, were colorful and international: Munich and Bavaria were definitely represented here, but among the more than 100 exhibition vehicles in the area of the factory quarter, they were rather the exception.

This Sunday in late summer 2018 stimulated and inspired something, that needed to be continued. Johannes Geissler has taken up the cause and, despite the pandemic in 2020, created a regional institution with the #Boxerbrunch.

Johannes, what fascinated you about the Luftmuc concept and how does the Boxerbrunch carry this fascination into a new decade?

Even though there were many international participants from all over Europe at Luftmuc, the spirit of the event and the popularity among the participants from our surrounding area showed, that such a format is of interest in Southern Germany. Its casual atmosphere, the festival character and the informal get-together among like-minded people is also our great role model for all #Boxerbrunch events – whether afterwork with ten participants or car meetings in the low triple digits. What is important, to me personally, is to open up the format to a larger target group.

We are happy about all participants with boxer vehicles, no matter if water or air cooled.

We are happy about all participants with boxer vehicles, no matter if water or air cooled. More important is a fitting mood. And with that, we are certainly in line with the trend. After all, Elferspot doesn’t define “classic Porsche” in terms of model series or types of cooling. Rather, the focus is on the cult, that the cars bring with them. It also doesn’t matter whether it’s a new car or a classic car. Before our first event, we had limited our communication to classic VWs and boxer engined Porsches up to 986/996. But then, we received so much positive feedback, including from drivers of younger models, that we were naturally happy to open up to these model ranges. We have made great friends across several 911 generations and their sister models – an absolute enrichment, not only personally, but also for the community!

So you could almost say, your events serve to reunite the Porsche family?

What has been in the market for 25 years, in the Porsche Museum in Stuttgart for a long time, and perhaps for the first time brought together in community form as part of Porsche’s 70th anniversary, is the core DNA of Boxerbrunch. On the one hand, we would like to show the entire span of our favorite engine concept’s evolution, whether VW or Porsche. On the other hand, we would like to include “kindred spirits” without boxer engines, like the transaxle models. But of course we are also happy about the encouragement of other brands. Among the Boxerbrunchers are for example some members, who, beside their four-wheelers, also call Boxer motorcycles from BMW their own. We are inclusive and not exclusive – that’s what makes us special and we won’t change in that respect.

How do the Boxerbrunch and its members define themselves? Are you a modern interpretation of a Porsche Club? An offline forum for people with similar interests? What seperates you from other communities?

“Members” may not be the perfectly fitting term, we just like to use it. In general, we are very open minded. Of course, we are happy to receive a few words about the person and the vehicle from anyone who wants to become a part of #Boxerbrunch. A membership – even more so a paid membership – does not exist, of course. We are also not a club, but simply a fun collective of like-minded people who enjoy boxer engined cars. Not only I, but also most of the other participants are not members of a classic Porsche club or similar associations. Just the openness of the community, that there are no obligations and the focus is on a relaxed togetherness, unites all who we call “members”. Our aim is to create a platform, where people can get to know each other, exchange ideas and share common experiences.

Our aim is to create a platform, where people can get to know each other, exchange ideas and share common experiences.

Which events have been possible for you so far and what is planned for the future? Did Covid limit you a lot in your planning?

What we would call a “real event”, we actually haven’t had since the start in 2020. Before #Boxerbrunch, I already had the opportunity to realize a few cars & coffee events with a good three-digit number of participants. Because of Covid-19, the launch for #Boxerbrunch was certainly scaled much smaller than intended – and yet a smidge bigger than planned. Instead of a big event, we had to switch to a more casual concept and created the “Park & Connect” together with our partner Munich Beach Resort. Simply put, it’s an exclusive parking space, which is made available to the Boxerbrunch under advance notification in accordance with the Infection Protection Act for an announced period. The second such event we may carry out this year in the same form on 25.07.2021 – who is interested, please feel free to contact us!

Of course, due to infection control regulations, we were not able to realize quite as many and, above all, not quite as big events. However, there were regular after-work events in 2020, mostly with 10 to 25 vehicles. However, we had to spread one event at BMW Group Classic over two evenings in October due to the increased infection figures. But as much as Covid has limited us in planning and execution, it has spurred the growth of our community. We don’t run a website or advertise Boxerbrunch in any way. On the contrary, we are non-commercial. We personally reached out to the first members through social media, and then the majority of the community has grown through referrals and invitations to roughly 200 members accumulating around 400 boxers.

Assuming the pandemic is over and normality is finally returning to all of our lives – what will be the new normal for the Boxerbrunch community and what can community members look forward to?

In any case, we will organize casual afterworks once or twice a month. In the future – that is without Covid 19 restrictions – also in the off-season without the appropriate vehicle. Once a year, we will offer the community a special event on a larger scale. But we will also stick to the Park & Connect concept, i.e. larger meetings without event character. We will try to implement these further and also offer them at different locations. In general, it is important to us to grow with the community and according to our possibilities.

Before there will be a trackday, we will further optimize the quality and options of our existing concepts. In any case, we want to offer our Boxerbrunchers the best possible experience. As a new format, we are planning the first charity ride this year. The proceeds will go to a charitable Munich institution. We have received a lot of positive feedback on this and are currently in coordination with several possible partners, regardless of the Corona situation.

How can interested people get in touch with you? Is there any kind of admission process to the community? How can you become part of the Boxerbrunch?

Since we are non-commercial and pay all expenses for the community by ourselves as the organization team, we do not run a website, newsletter or forum. As communication channels, we rely solely on our Instagram page and for about half of the Boxerbrunchers, there’s a Whatsapp group chat. Anyone who wants to join us: Feel free to leave a DM. A few words about the person, its origins and a photo of the boxer to it are welcome. But of course we are also happy about newcomers in search of like-minded people. The best way to do this is via Whatsapp to +49 (0) 170 1987 911 or via a message on Instagram.

Today we’ll end, where we usually begin. Johannes, how did you get involved with Porsche and boxer engines in the first place? What do you drive privately?

I have been fascinated by Beetles & Co since my earliest childhood. I often went to my uncle’s VAG dealership. That time left its mark on me, because the boxer engine quickly played a role in my fleet as well. So it was no surprise that a Porsche soon found its way into my garage. First I was allowed to call a Porsche Boxster S 986 and later a Porsche 996 Carrera 3.4 my own. Both are great vehicles that absolutely convinced me.

After a few years of abstinence, historic motorsport brought me back to the boxer engine in 2017. Today I can call a 1990 Porsche 964 Cup conversion with 3.8 RS engine my own and also drive an original 2004 996 GT3 Cup. So far, I have been racing in the Austria Histocup. However, I am very much looking forward to getting to know other race tracks with the two boxers soon. Of course, I can’t drive the two race cars spontaneously for a coffee at the gas station after work. That’s why I’m very happy to have access to street boxers ranging from VW 181s to Porsche 911s.

Share "Boxerbrunch – rather inclusive than exclusive!" with your friends!