Elferspot Top 5: Porsches below the radar 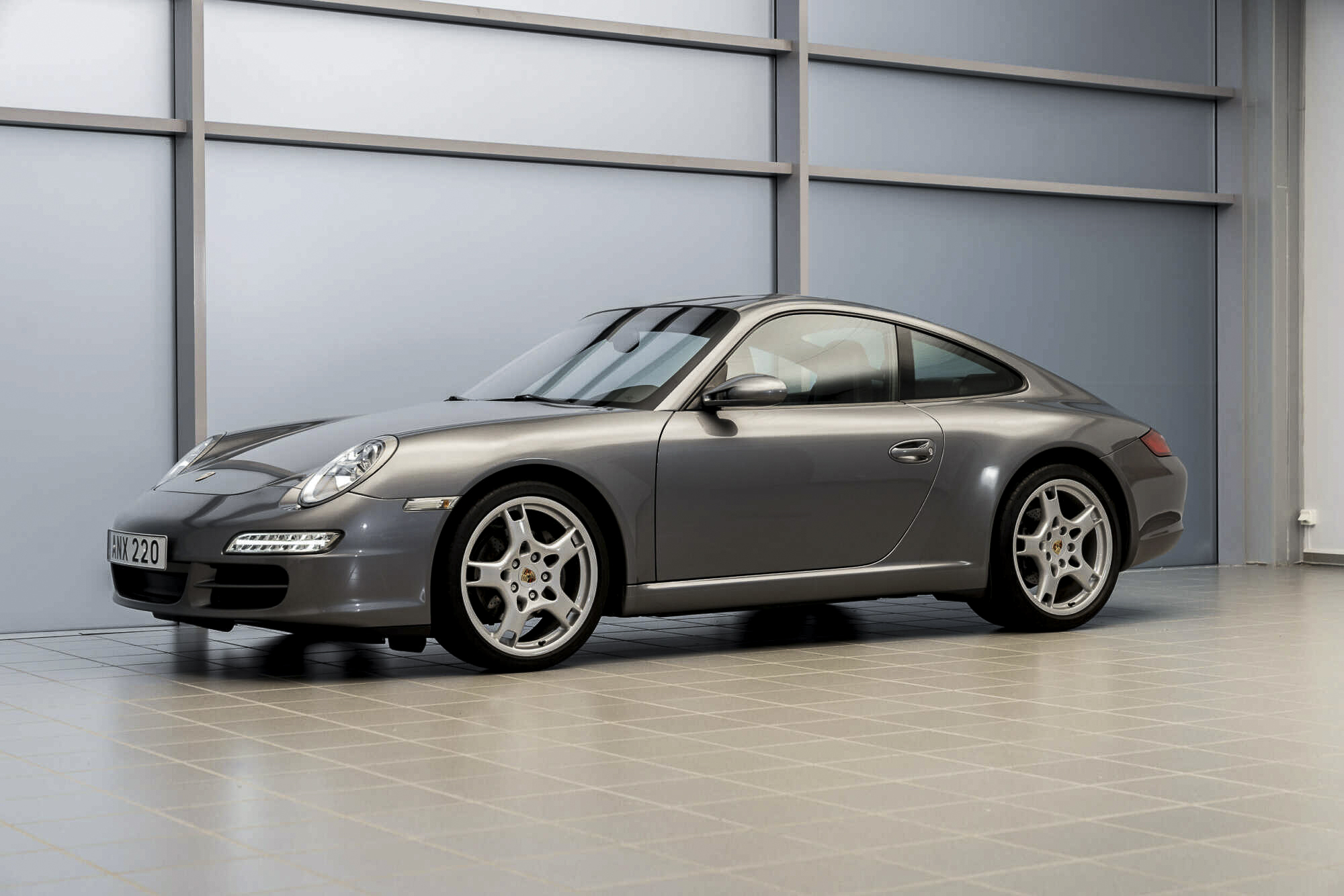 Whether at meetings, in forums, or at the regulars’ table, one question occupies the minds of almost every Porsche fan: Which models are currently still available at a reasonable price? The saying “It’s only getting more expensive!” should not be used here. The market is too fast-moving for that. What we can do, however, is give you our top 5 picks for the 2021 Porsche used car sale as inspiration.

Basically, any sports car with a naturally aspirated engine and three pedals seems to be interesting and in demand at the moment. High revving engines and manual gearboxes are sort of a dying breed in sports cars. Cars with such tech hold their value amazingly good and, above all, offer loads of driving pleasure. This combination promises the maximum possible connection between driver and vehicle. Every gear change is an experience. After setting the tone a bit, we now pick the right Porsches for (almost) every budget and tell you why we think these models tend to be a bit undervalued!

The Porsche 924 S, which was only built from 1986 to 1988, is, so to speak, the last gasp of the first transaxle generation. It replaced the handy but (sorry) a bit down on power Audi-engined Porsche 924. The technology was taken over in large parts from its bigger brother, the Porsche 944. Means in this case: pokey 2.5 liter engine in the narrow 70’s design of the 924 body. Externally, it can only be distinguished from the other 924s by the 5-hole wheel hubs.

In terms of driving, however, it is clearly more confident than its predecessor. Its wonderfully torquey engine and the low weight of less than 1,200 kg are the ingredients. They not only make for great pulling power, but also for real world fuel consumption of 10 liters per 100 km (roughly 28 UK mpg). With its already great handling, thanks to an almost perfectly balance weight distribution, it means you can throw the car into the corners and let the tail wag slightly on the way out. It’s a lovely experience!

Quite secretly, this often forgotten gem of the Porsche world has also left the price trough. Good Porsche 924 S are rare and have already gotten a bit more pricey. Long gone are the times, where you could pick up a decent 924 in the lower 4-figures. But if you search persistently, you can still find usable cars around the 10,000 Euro mark. Often, however, the really nice cars are more in the 15,000 Euro range. The Porsche 924 S is a real driver’s car, for those who like to fly a little under the radar. Give it a go and you’d be amazed, how capable these things are.

Being Porsche’s first mass produced car, the 356 is actually a household name for all Porsche fans. It marks the beginning of a line of sports car construction that now spans more than 70 years. While the Porsche 356 A and pre-A models are now hardly affordable, the later Porsche 356 B and C haven’t drawn all that much attention. They seem to have lived in a niche for the last decade or so. That’s pretty remarkable if you remind yourselves, that the Porsche 356 from model year 1959 onwards has already become quite a grown-up car and very usable.

Porsche tamed the handling with a compensating spring on the rear axle. Thanks to a flatter-cut tank, Porsche was able to enlarge the frunk. Starting with the 356 C, Porsche even installed disc brakes. In addition to the significantly improved braking performance, this was a boon for every do-it-yourselfer. Despite all this, it retained its charming, sleek design, which found many enthusiasts, especially in the USA. The little German sports car became very much daily driveable.

Don’t be fooled however, thinking the Porsche 356 has reached unattainable prices. Every now and then, even fully restored vehicles with a bright future are available for less than 100,000 Euros. From a technical point of view, the 356s are relatively controllable, if one disregards the Fuhrmann-engines. Those require experienced technicians to set them up properly. Another pro for the 356: Anyone who drives up in a Porsche 356 earns a lot of sympathy and joyful looks. And by the way, it’s also really fun to drive, weighing only about 900 kg.

An infernally screaming V10 with 612 hp, paired with three pedals and a six-speed manual transmission, packed into the first production car with a carbon fiber monocoque. It was also the fastest production car at the Nürburgring at the time, clocking 7:32 minutes despite a few damp patches on the track. The Porsche Carrera GT is an institution and is still considered by many to be the best supercar of all time.

And grandees like Tim Schrick don’t even come to this conclusion just because of its performance figures. As there are, for example: 9.25 seconds 0-124 mph and 207 mph top speed. The Porsche Carrera GT is the last analog supercar. For the era of the early 2000s it is what the Ferrari F40 was in the late 80s, early 90s. In probably no other car with such performance do drivers still feel that level of engagement. Every single thing the the car does is based on inputs that aren’t washed out or smoothed over by algorithms. The Porsche Carrera GT resembles a fine blade that wants to be moved by a knowledgeable hand. Only then does it reveal its full spectrum of performance and fascination.

But, and this is where it gets interesting, the Porsche Carrera GT doesn’t cost seven figures. Some models are still available for under 600,000 Euros! Sure, still a lot of money, but let’s put it into perspective. Let’s compare it to the supercar celebrities of this era: Ferrari Enzo or Maserati MC 12 to name just two. Those can’t be had for less than 2 million Euros. While that’s great news for prospective buyers, we’re sure it won’t last much longer. So if you want to acquire a Porsche Carrera GT, you’d better hurry up!

What, a fried egg Boxster in second place? Yes, the first Porsche Boxster 986 is our runner-up. Why? Let’s start with the facts: The Boxster is on the verge of becoming a classic. First models will already be 24 years old in 2021. From an economic point of view, you also have to admit: They are no longer available for four-digit amounts around the block. So you’ll have to hold out to get yourself a model that’s worth preserving.

But much more than monetary aspects, the heart plays a major role in that sort of decisions. Sports cars have become so fast in recent years that it’s hard to really enjoy them on the road. It has become something of a catchphrase in the trade press, but modern sports cars have become almost too fast. As more and more potential buyers realise that, the first Boxster with its 2.5-liter engine producing just 204 hp got more attention. It needs around seven seconds from a standstill to 62 mph and even the later Boxster S still needs about six seconds.

In plain language, this means that, like the 924 S, you can wring out the first Porsche Boxster wonderfully and enjoy flat-six noises at their finest. The intake noise directly behind your ears itself is just addictive. Early models in particular shine with a roadworthy weight of under 1,300 kg and exude immense lightness. As the grip level is significantly lower than on its younger siblings, the limit comes way earlier and slip angles are easily manageable. You can play with it without being afraid. And isn’t that exactly what really makes a driving machine? Elferspot top tip: Don’t spurn the base model Boxster, just give it a try!

They really do still exist – the bargains among the 911s. While the much-maligned Porsche 996 is on its way up in price, the 997 has probably just bottomed out. Generation six of the Porsche 911 went back to the classic path with round shaped headlights and took a more conventional route in terms of design. Quite a few consider the Porsche 997 to be the most beautiful water-cooled 911 ever. (Is there really such thing as an ugly 911? Just wondering…)

It is analog, yet far from being old-fashioned. The interior is just as timeless as the body. A Porsche 997 doesn’t look like a fifteen-year-old car. Its age only really shows in its current residual value. If you’re quick, you can snatch a Porsche 997 Carrera for well under 40,000 euros. We’ve even seen some change hands for just under 30,000 euros. Depreciation can be a wonderful thing for buyers.

Sure, a Porsche 997 has its weaknesses, but it’s currently the most affordable Porsche 911 you can buy after the 996. At under 1,400 kilograms for the base model, it’s also one of the lighter water-cooled Porsche 911s. The handling is balanced, mature, but still genuinely 911. Lots of traction, great sound, wonderful steering feel…. The only downer: The Carrera 2 was not available with the wider body. That was reserved for the all-wheel-drive model. In summary, Generation Six of the 911 offers a lot of car for the money, and for us it’s clearly one of the hottest prospects in the 911 market.