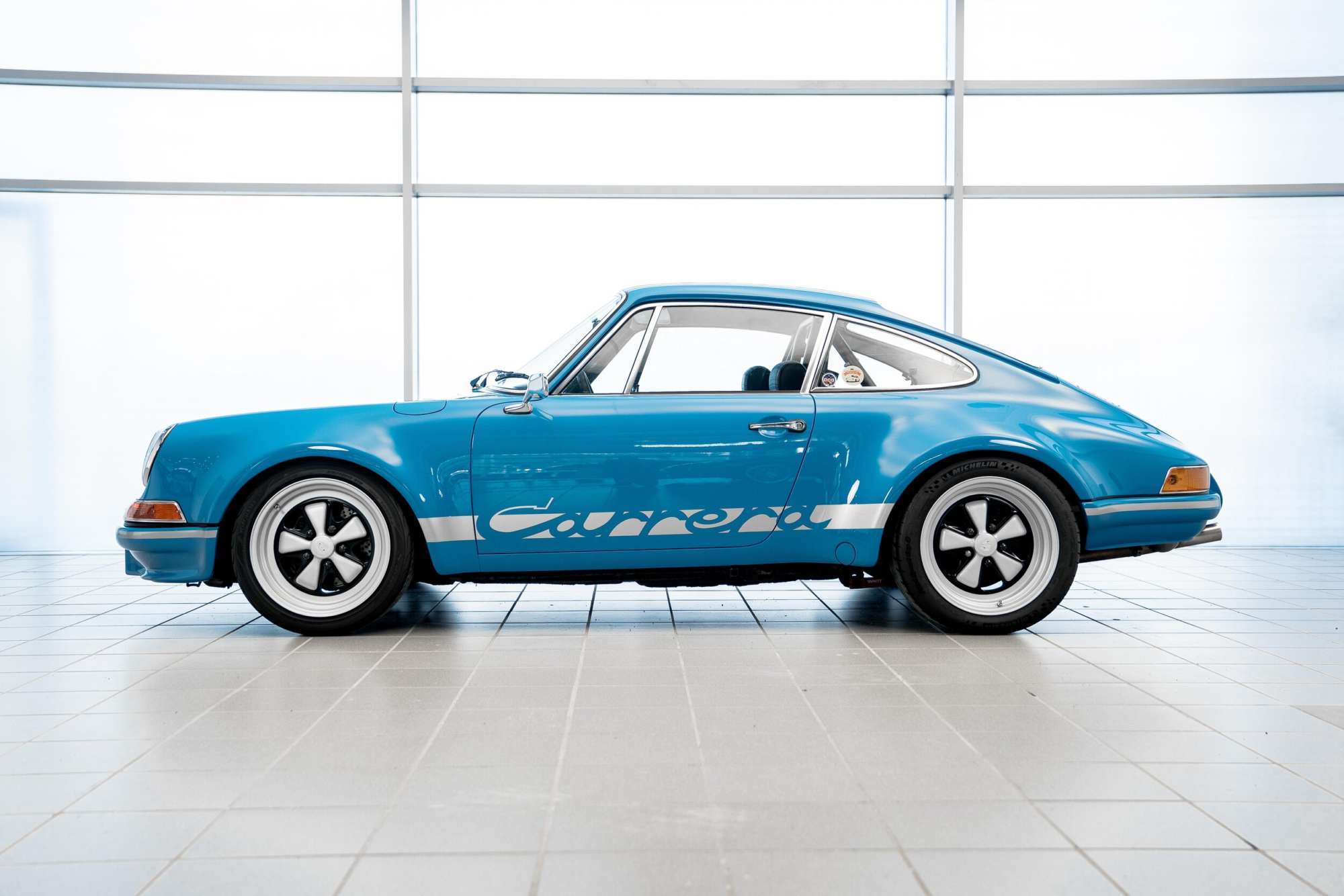 The color of a sports car is always an expression of the owner’s personality. Colors always arouse emotions and therefore, choosing the right color for presenting a vehicle is key to sales success afterwards. Not many sports car makers are that much into the play of colors as Porsche. In recent years, the Porsche brand and their customers showed more courage for color, which led to a real renaissance of blue cars.

Have you every wondered, how many different blue tones Porsche offered? Did you know, that between two 911s in the same color there could be a gap of more than 60 years? Today, we want to take you an a journey through Porsche’s long history, presenting you some of the most striking blue tones, ranging from Azure Blue and Petrol Blue up to Miami Blue.

Porsche 356 models from 1948 until 1955 are called pre A models. In that time, pastel shades were pretty much the trend. Tasteful combinations of blue on the outside an cream in the interior were chosen regularly. Often even with fitting white wall tires and bright roofs. Porsche’s Azure Blue, color code 522, fitted perfectly in that era. Especially when matched with bright interiors that color scheme made you feel positive and still reminds us of beach postcards of the time. That color was only used again 2016, more than 60 years later on a Porsche 911.

Only the Porsche 911 short wheelbase (SWB) models were offered in Aga Blue, which is a medium blue, combined with touches of grey and green. In the late 60’s, darker colors like bottle-green became more popular again. It harmonizes particularly well with the addition of chrome trim, yellow indicators and especially red interior materials. Aga Blue has the color code 6608 and perfectly represents the spirit of the time.

The 1970’s were a pretty colorful decade, but white, grey and black took over more and more market shares. Ironically, Petrol Blue came up in the exact same time as the second oil crisis in 1979. Petrol Blue is a relatively dark metallic blue with a small glimmer of green. Whoever owns a Porsche with the color code 376 or LM5V today, can call him- or herself a member of an exclusive club. And as we live in a time, were alternative powertrains get more and more popular, isn’t it kind of cool to drive in a sports car, whose color is called after the fuel it needs?

As you may have noticed, were getting into the more subtle areas of Porsche’s color spectrum. Marine blue was fairly popular back in the day, but black, silver and especially guards red dominated the roads in the late 80’s. Porsches with the color code (L)35V, at first glance, nearly seem to be grey. But depending on the ambient light and viewing angle, the color changes to a wonderful medium to light blue tone. In a darker environment, it even looks purple. In company with bright interior colors, a Marine Blue Porsche 911 is one hell of a tasteful piece of design.

Click here and find all Porsche listings in color blue

In the early 90’s, flashy colors had a bit of a comeback. Yellow and purple were modern then and perfectly fitted into the time of synthesized pop music and all time classic movies like Basic Instinct or Hot Shots. In the times of shoulder pads, Porsche offered showy colors like the pretty bright Martime Blue. The color was available for nearly all models of the Porsche lineup. Martime Blue aged exceptionally well, so in 2011 and 2016 Porsche gave that color a comeback on the 911, Boxster and Cayman. Color codes for this non-metallic blue are LM5A, L38B, F2 and 38B.

At the beginning of the new millennium, Porsche’s customers lusted after subtle colors. Black, grey and silver are dominating the street scene since then. Porsche therefore offered the dark and very metallic Lapis Blue. Depending on the ambient lighting and the outline, Lapis Blue could shimmer very bright in some areas. On the other hand, it still remains discreet and unobtrusive looks. During the mid-2000’s, every single Porsche model could be ordered with the color code M5W. Boxster and 996 models do wear Lapis Blue quite regularly.

So, how many shades of blue have been offered by Porsche? In total: 102!

By now, you should have got the impression, that a maximum degree of individuality for the customers has always been highly important for Porsche. In recent years, more and more customers bought cars in very flashy colors. That’s great news, at least from our perspective. No matter if Petrol Blue, Aga Blue, Azure Blue or one of the 99 other blue options. In 2017, Porsche released a particularly striking color with Miami Blue, which seems to be a perfect definition of a true eyecatcher. We love those dashes of color in our world of silver or black leased cars!

Click here and find all Porsche listings in color blue