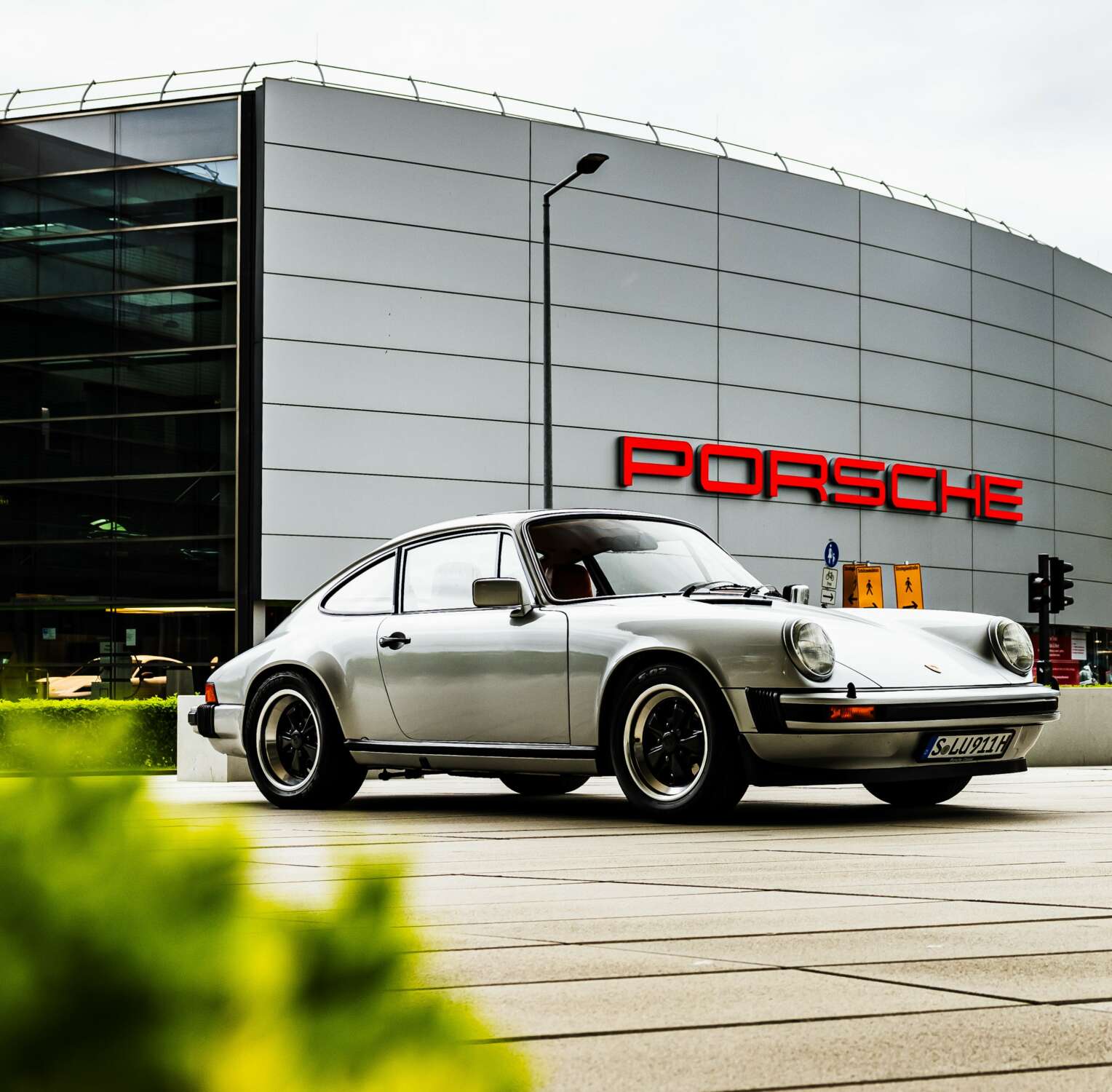 We at Elferspot Magazine are always happy to talk to Porsche enthusiasts from all over the world about what sparked their passion for Porsche sports cars. After all, it is often precisely these stories that connect us enthusiasts and lead to many friendships over the years. This time I arranged to meet Lukas over a glass of wine for the Elferspot Porsche Talk. Lukas is an industrial engineer who drives and photographs a silver Porsche 911 SC, built in 1978, with a very special interior.

Lukas, so far we only know each other through the Instagram profile around your silver Porsche 911 SC, @silverelfer. Why don’t you tell us something about yourself?

Hello Richard, it’s my pleasure! I am Lukas Krämer, 34 years old and born in Leonberg, near Stuttgart. So I was born in good neighborhood of Techart and Gemballa. After graduating from high school, I studied industrial engineering. Then I went abroad for a while, but during my studies I came back home for an internship at Porsche. Today I’m working at Porsche again. Since the first hour I am with the project Porsche Taycan and now in project management. Privately, I’ve been air-cooled regularly for just under a year now.

Wait, so we’ve met to talk about an air-cooled 911 and you’re working on the Taycan?! Now I’m baffled… Where does this fascination for the classic car come from?

I’ve probably absorbed the Porsche theme with my mother’s milk. My grandpa used to have a G-model. Even as a little boy, I loved to ride in it. I didn’t even want to get out. My mother always had to drag me out of the car and almost dislocate my arm to get me out. When you grow up in the Stuttgart area, of course you always see lots of classmates being driven to school by Porsche employees in their company car. But my family was certainly the biggest driving force behind the fascination. My uncle is still absolutely Porsche-mad today.

The technology of the older models in particular has always appealed to me. For example the fact that you can still do a lot of work on them yourself and learn. I think the difference between the Porsche 911 SC and the Taycan is fantastic. On the one hand, the analog SC, without power steering, raw. On the other hand, the Taycan is sort of a contrasting program. Nevertheless, you can still feel the heritage, the DNA. A Porsche is a Porsche, end of the story. And I’m very proud that we’ve succeeded in doing that with the Taycan. In my eyes, these make the perfect two-car garage.

Does that mean you’ve fulfilled a childhood dream with the 911 SC?

Totally! I’ve always had the dream of driving an old 911 at some point. I wanted to do it, just like my grandfather, so to speak. To achieve this, I did without a car of my own for many years. I did have the faint hope of getting a car after graduating from high school, but my father quickly brought me back down to earth. As a typical Swabian does, he made me understand that I would have to earn my first car myself – just like him.

During the time abroad, I then didn’t need a car. I also took the bus during my time as a doctoral student at Porsche. What I found exciting was too expensive for me at the time, so I preferred to save up. After having saved enough for an aircooled 911, I started looking. It was clear that it would be a Porsche 911 G-model Coupe. I had a family history in that respect. Besides, I’m not a particular fan of 964’s design. At the same time, F-models were too expensive. In my eyes, the G-model is a great introduction to the world of classic cars.

Why didn’t you want a narrow G-model? And were you specifically looking for a silver car?

That was not so much a decision against the narrow G-model, but rather for the more muscular appearance of the later model. At the turn of the year 2020/2021 I started my search, but soon had to say goodbye to the idea of a 3.2 Carrera with a G50 transmission. These were too expensive for me personally in terms of price / performance. There was simply nothing suitable in my budget, because I absolutely wanted a clean history and as low mileage as possible. My uncle then encouraged me to include the Porsche 911 SC. He also drives one himself and convinced me that a well-maintained 915 transmission can also give a lot of pleasure.

I was basically not picky about colors. But at some point I found this silver 911 SC. Innocent on the outside, completely Hummer on the inside! I immediately fell in love with the interior. The combination of the plain silver exterior with the bright and cheerful leatherette and pinstripe velour hummer inside (option codes Z2 & 23) really picked me up from the first moment. Depending on the incidence of light, the color changes and offers a different hue from every angle. There are very few 911s with this color combination. I know of only two. But with all the euphoria, I took almost two hours with an experienced colleague and examined the car from front to back. My uncle was there via Facetime, of course, and supported me from afar. Everything fell into place, so we quickly came to an agreement and I was allowed to call myself the owner of a ’78 Porsche 911 SC!

After the condition has obviously convinced you, here’s the question: Has the Porsche 911 SC also convinced you driving-wise?

I can also answer this with an unqualified “yes”. Starting with the dimensions. The Porsche 911 G-model is a tiny car by today’s standards. This makes it easily positionable on sporty country road trips. Of course, you notice that in the interior, too. You sit so close together, the shared driving experience becomes more intimate, if you will. Among other things, because there’s no power steering and you’re much more aware of sounds and smells, you notice on every drive how far development has progressed in the last 40 years.

Yet despite these leaps in development, you can sense the same Porsche DNA as in the 992 or even Taycan, for example. A 911 SC may have long been a classic car, but it’s far from old news. At first, my wife often told me not to drive too spirited, because the SC – at least for her – was an antique. But both of our trust in the SC grows with every meter. These cars have to be driven. They were developed for exactly that purpose. In the meantime, we have jointly christened the car Pinchy. Like the Hummer that Homer Simpson kept as a pet out of pity.

But the car makes a far from pitiful impression! How often do you let Pinchy off the leash and on what occasions?

You are right. It is visually and technically in superb condition and drives fantastically! The relatively low power output also has its advantages. You can really take the car out and use it, rev it out. That’s often not even possible with new cars in that form, just because of their insane acceleration. With the exception of my basic rule that Pinchy should not be exposed to salt, I drive the car as often as I can. I prefer to use it for longer trips.

One of the best things about the overall experience is the reaction of the people. I previously had a Porsche 992, and the image of a young man in a new Porsche 911 sometimes generates resentment. When I’m out and about in the SC, on the other hand, I’m constantly given the thumbs-up or approached by older people who once had a car like this themselves decades ago.

We generally drive the SC quite a lot over the Swabian Alb, Black Forest or if it’s just to have an ice cream in downtown Stuttgart. I also like to let my friends participate and drive Pinchy. For example, he has acted as a wedding car for the sister of my best friend. Polished to a high shine, it thus added to the most beautiful day in the life of a person I like. That was great! And in general I was able to make a lot of new contacts this year. Old cars connect a lot of people and at Cars & Coffee events you always find nice people to talk to.

What else do you want to experience with your Porsche 911 SC?

I would love to do a really long road trip. Morocco tops the agenda there, and a continental crossing would be the long-time goal. Preferably through America. I would like to immerse myself in the respective cultures with a lot of time. And as I said before, I find traveling by car very calming. When you’re on the road for a long time, that’s when it really gets exciting for me. After the first two or three hours, when the flow of conversation slowly dies down and you concentrate on the road and the music, it only becomes really great for me, almost contemplative.

Last but not least, a question that no one can avoid: Which Porsche is your favorite? Multiple answers are possible, of course!

Immediately, three cars come to my mind. Provided, of course, that money is no object. First of all the 991 GT3 Touring. The Touring is so extreme in its capabilities, but to the layman it is almost indistinguishable from a 911 Carrera. In addition, the Porsche 993 Carrera 2S really appeals to me. Looking at the very top of the shelf, I would pick a 911 Carrera RS 2.7. I would certainly describe it as the biggest dream car for me. A friend of my uncle’s had one of those back then. I may have been ten years old, when I had my first real “Porsche experience” in this car. The memory of it has not faded to this day.

It’s great that Porsche also has real petrolheads at work in the development of electric mobility. Lukas, it was a pleasure! Thank you very much for the interview!

All photos in this article were taken by Lukas Krämer and Karim El Barbari.