A guest commentary by Markus Haub

The idea to customize an old 911 came up aorund the year 2013, when I went to my Porsche workshop to bring another car into the winter parking. I saw an old rusty F-Modell and started thinking about how to rebuild it, to make it a bit sportier and cool looking. A car just for driving, assuming that this could be done with little effort, budget and time.

In the following months I was gathering images for inspiration and starting to sketch a little bit. As a car designer, a distinctive look was very important to me. Color combinations, interior, seats, instruments. You cannot change a lot, but the few elements are enough to make it stand out from the 911 crowd. The idea grew slowly and after over a year of planning and dreaming I also realized that it was probably not to be done with a small budget and that it would require a more or less complete restoration. I also needed an expert partner for the project and a donor vehicle, which should be ot too good (too expensive), but also not too bad (too expensive).

By chance, I discovered on the Internet the site of Onassis Porsches Agency and asked Tom Geadke if he could help me. He seemed to be well connected in the custom Porsche scene. After a long phone call with him I had the impression that he understood me and my idea and could help me. We arranged a meeting at Classic Boxers in Erkrath, the factory of his friend Daniel Schäfer. He had already built for himself a Hot Rod 912/911 and I could have a look at it at the same time. I brought my big inspiration-book with me, full of photos of 911s and various custom details. In the end of the meeting I had shown a few of my sketches to visualize the look of the car. Some things were fixed for me: The car should be an F-model with a narrow body, painted in the color “stonegrey” and at on the rear I wanted to have a bright red graphic. In addition to this, Gfk mudguards and rear lights in the look of the legendary “911R” and some unique details to make the car unmistakable. Lightweight construction and maximum power were not the focus of attention, but rather a coherent vehicle that celebrates the spirit and purism of the early race Porsches. In the meeting I was very impressed by the perfectionism of the work they do and I felt the excitement between us and I realized that I found the right team in Tom and Daniel. We got along very well and we agreed to start the adventure.

I brought my big inspiration-book with me, full of photos of 911s and various custom details. Markus Haub Some days later accidentally I found a pretty good donor car near Frankfurt. A not running, but accident and (almost) rust free and complete US model from 1970, which came back to Germany in the 90s, but was never put back on the road. The history was completely unknown. We just found later a a parking ticket from Santa Monica/CA in the ventilation shaft “Beach Parking, all day 3 $”. This relict should later inspire me for the the graphics on the engine bonnet … The project started in July 2015 with the complete disassemby in the following weeks. Recoverable parts were revised or replaced by new ones. The existing 4-speed transmission is replaced by a 5-speed one with differential lock and a Wevo-shortshifter. The engine was completely rebuilt in the workshop of Matthis Hoeing in Hamburg and expanded from 2.2 liters to 2.4 liters, equipped with carburettors and “Kremermodifikation” on the crankcase and it should have now almost 200HP. The paintwork took a lot longer then planned. The color is stone grey (paint code 7510), which is originally a 356 color, but was available as “special paint” for the 911 in 1966/67. The idea was to give the car a very unique look and some original details in the interior and exterior: The customized instruments with the modified rev-meter and clock dials, the round fuel-cap in the fender and the rear side window for example. This recalls the very first camouflaged 901 Prototype from 1963, which had a split glass-metall window.

Project 9110101621 (which is the VIN) was finished some beginning of september, after two years of work and is now ready for the road.

About Markus Haub:
Markus Haub is a car designer and artist. He worked for Volkswagen and Renault in Barcelona. Since 2007 he is self employed and exhibiting his artwork in various galleries in Spain, Germany, England or the USA. He lives and works in Spain and Germany. 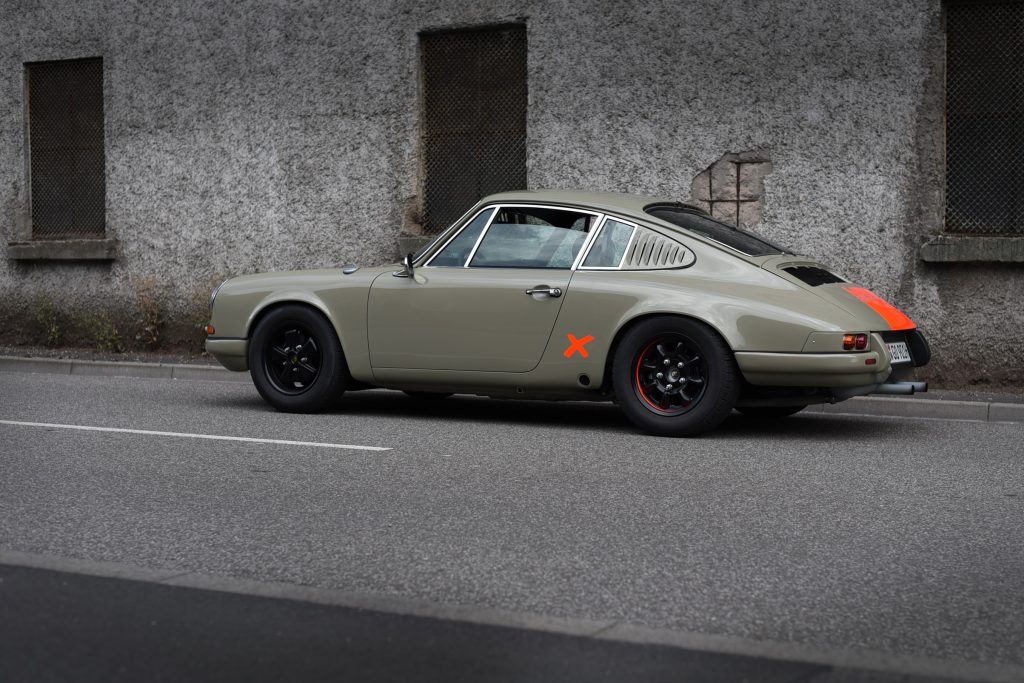 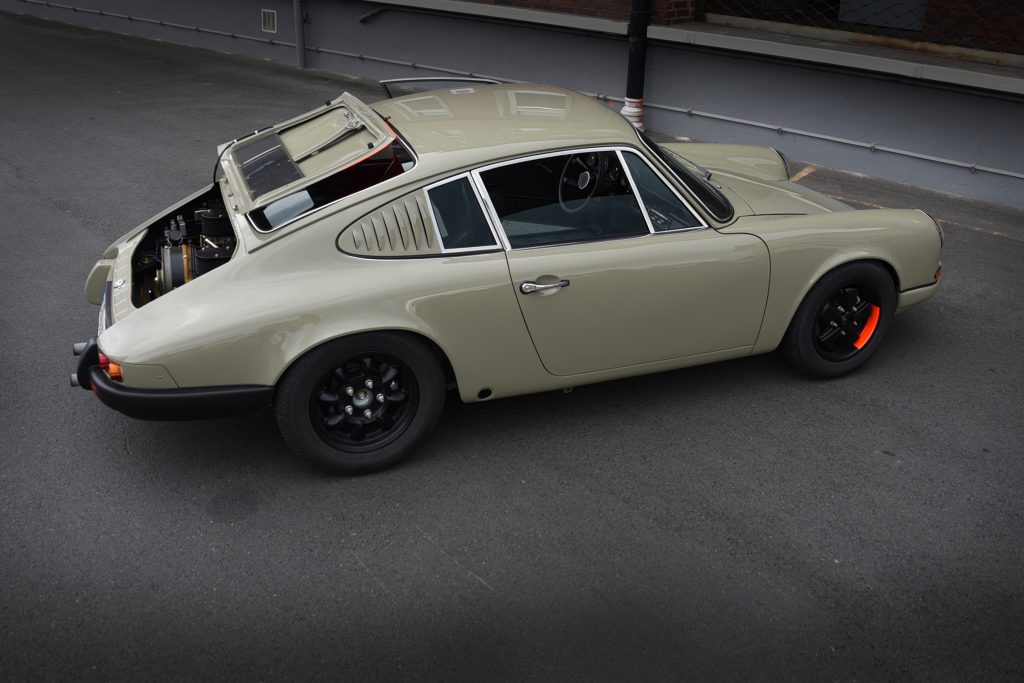 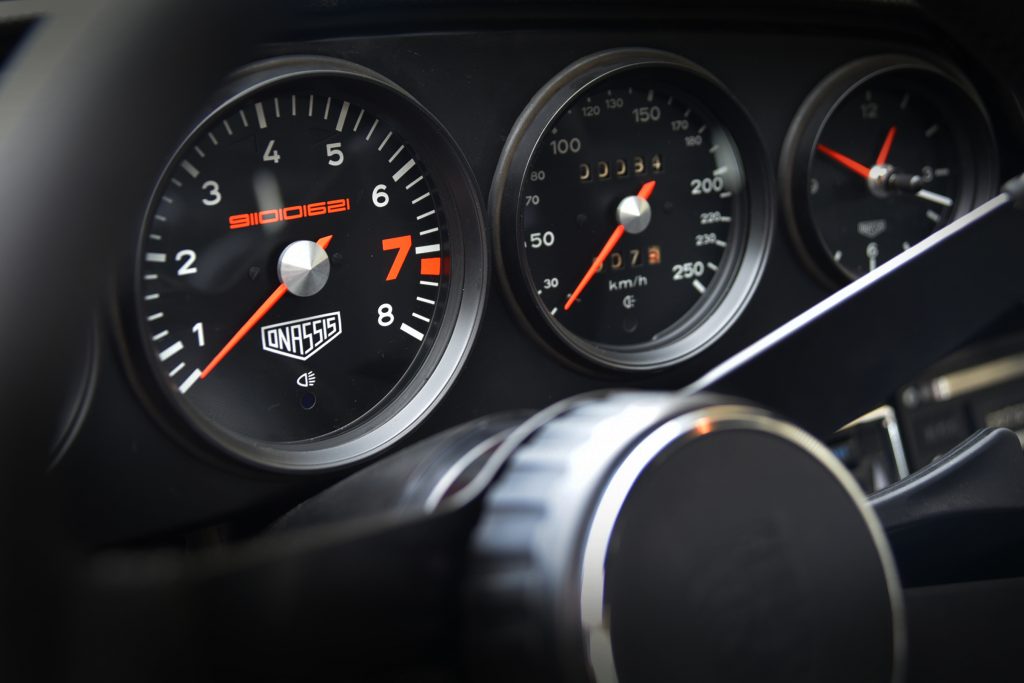 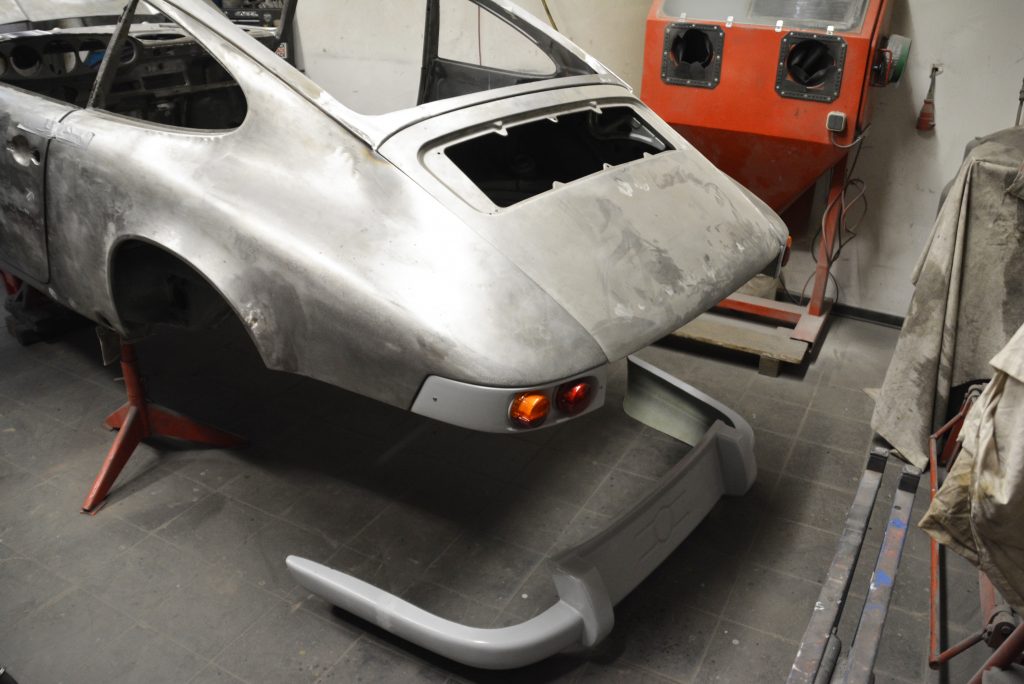 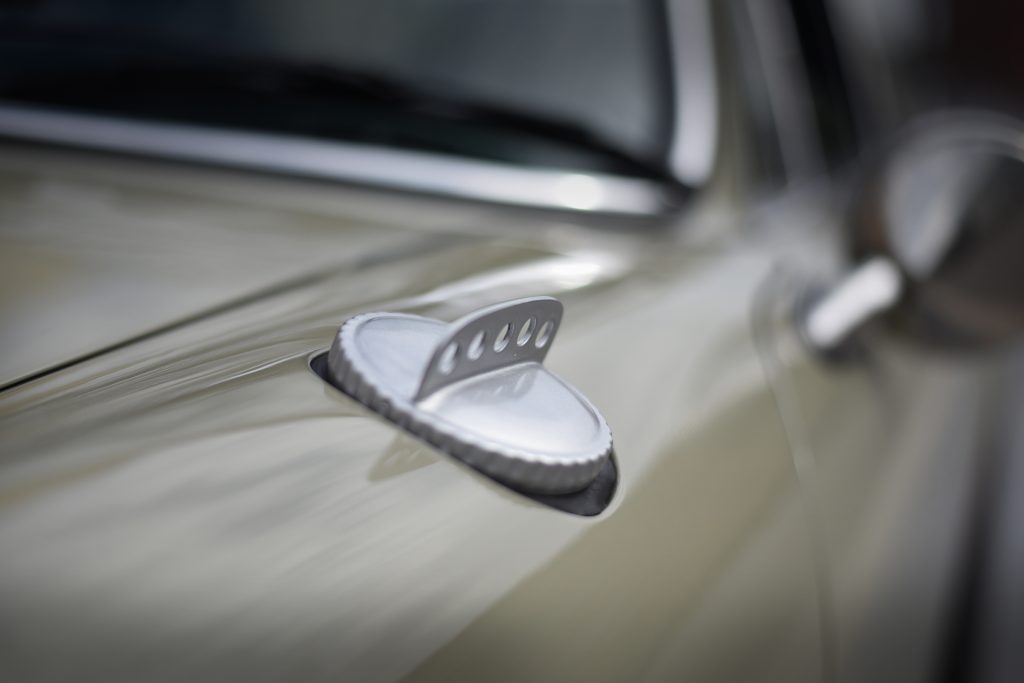 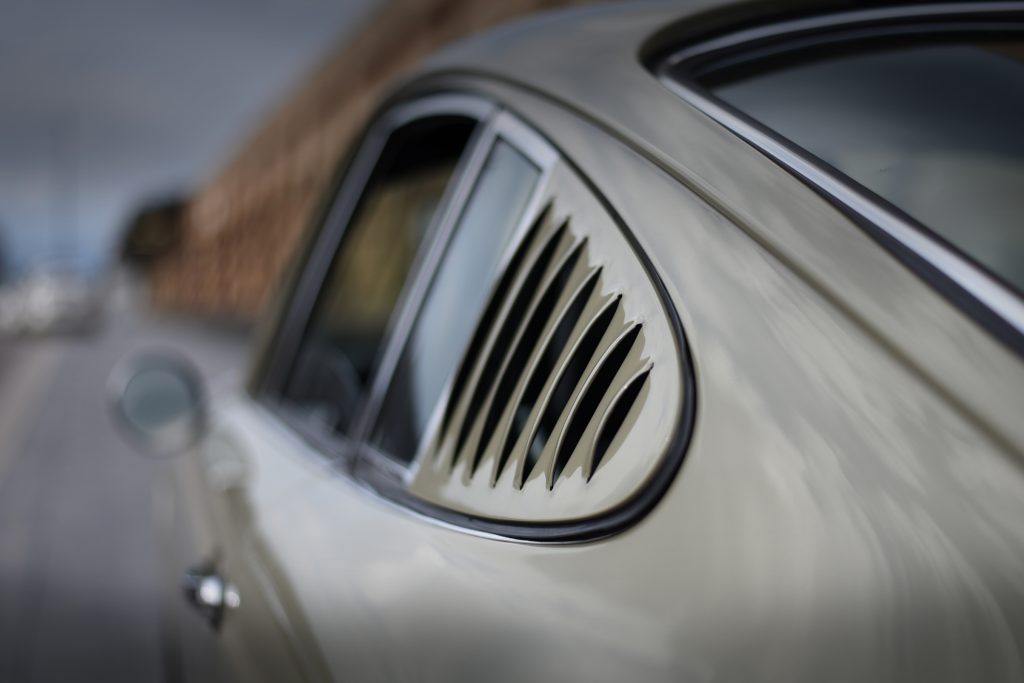 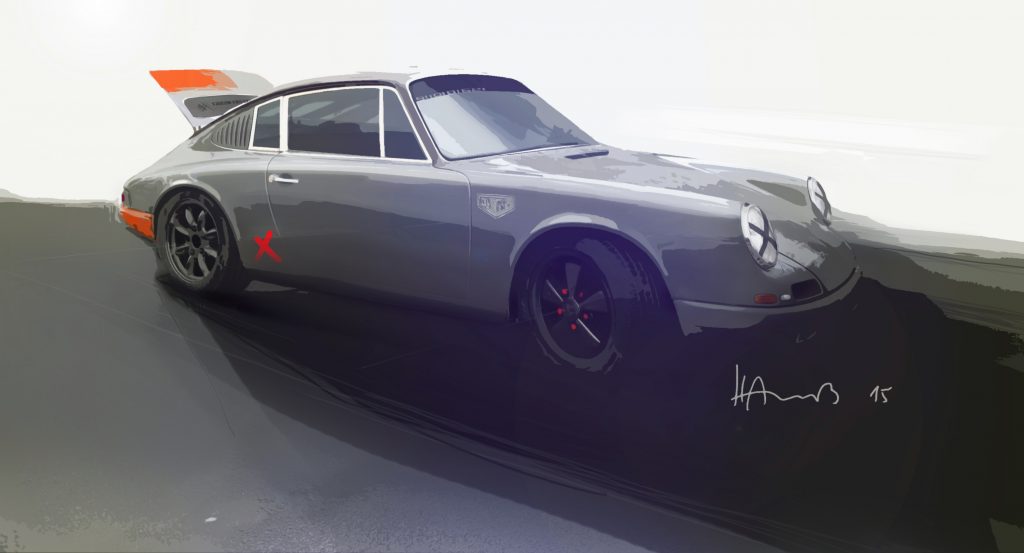 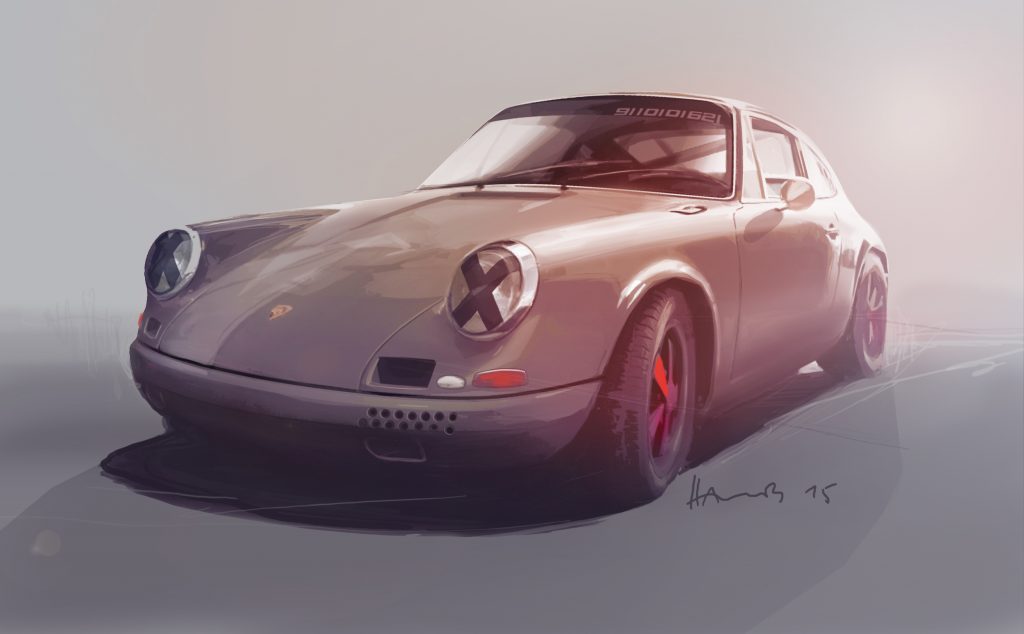