Competing against the Ferrari LaFerrari and McLaren P1, the Porsche 918 Spyder proved to be able to hold its own against the very best that the automotive industry could muster. Utilizing premium materials, top-quality components, and cutting-edge technology, Porsche created a car that was not only stunning in its performance, but one that was equally stunning in its looks and sheer attention to detail.

Cradled in a chassis constructed almost entirely of carbon fiber-reinforced plastic composite, the 918’s heart is a 90-degree V-8 based upon that found in Porsche RS Spyder LMP2 Le Mans prototypes. Thanks to its flat-plane crankshaft, titanium connection rods, four valves per cylinder, and dry-sump lubrication, it can rev to an ear-piercing 9,000 rpm. As a result, it puts out a 608 horsepower, which equates to an incredible 133 horsepower per liter of displacement.

In addition to this, the 918 Spyder’s combustion engine is supported by a pair of electric motors, with one being mated to the engine itself and another providing drive to the front axle. These electric motors produce an additional 284 horsepower, bringing the 918 Spyder’s total output to 887 horsepower and 994 pound-feet of torque. All this power is managed through Porsche’s tried-and-true PDK seven-speed transmission, and its delivery can be further refined through five driving modes, ranging from full electric to “Hot Lap,” which utilizes every ounce of available performance from the powertrain. Sixty miles per hour can be reached from a standstill in under 2.5 seconds, a time faster than both the McLaren P1 and the Ferrari LaFerrari, leading towards a top speed of 211 mph. Comparing performance figures between “the big three” showed that not only was the 918 the fastest to 60 mph: It also boasted the farthest electric-only range, lowest carbon dioxide emissions, and lowest fuel consumption.
Of course, the brakes utilized to bring the car to a halt are just as mighty as the 918 Spyder’s gargantuan powertrain. Massive carbon-ceramic discs sitting behind the car’s lightweight alloy wheels measure at 410 millimeters in diameter at the front with six-piston calipers and 390 millimeters in diameter at the rear with four-piston calipers. Assisting the car’s handling and downforce are a handful of active aerodynamic features, including an adjustable rear wing, a pair of under-floor flaps in the nose, and further adjustable flaps in the headlamp area.

SERIAL NO. 238
The stunning 918 offered here, serial number 238, was ordered by the consignor and delivered new to him via Porsche Centre Hong Kong on 8 January 2015. Number 238 is clad in the boisterous shade of Racing Yellow over a full Black leather interior complete with optional Acid Green details and Visual Carbon Fiber trim throughout. These bespoke details find their way to the exterior as well, with a set of Acid Green brake calipers tucked inside 20-inch “standard” alloy wheels.
The consignor further specified number 238 with Visual Carbon Fiber mirrors, removable roof panels, and rear spoiler. The accompanying order documents provided by the consignor show more than twenty factory options specified, most notably the desirable front-axle lift system, “full leather” sport seats and steering wheel, glare reduction package, Burmester audio system, and electric air conditioning.
In 2019, the consignor imported the car to their residence in the UK, where it was regularly maintained by authorized Porsche facilities. 238’s accompanying service booklet show that it received its four-year major service in September of 2019 at Porsche Centre Reading, then showing 1,357 miles. In June 2021, 238 was recently returned to the same facility for a complete servicing in preparation for sale.
Now displaying fewer than 1,450 miles driven from new, number 238’s appealing accoutrements and lengthy list of factory specifications, single-owner history, documentation, and desirable color combination all contribute to its standing amongst the best available examples of Porsche’s 918 Spyder. 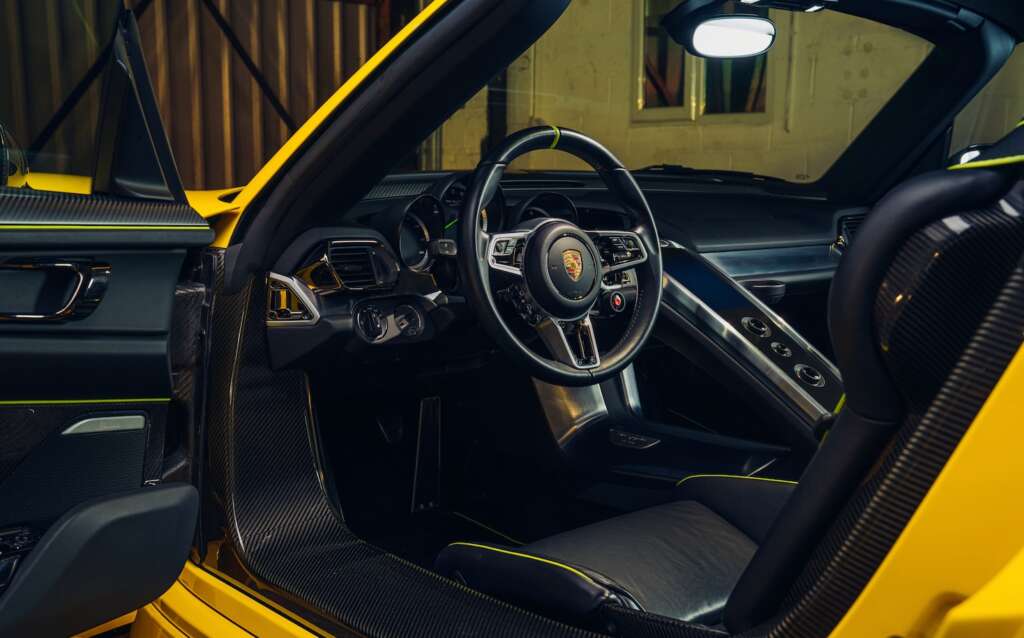 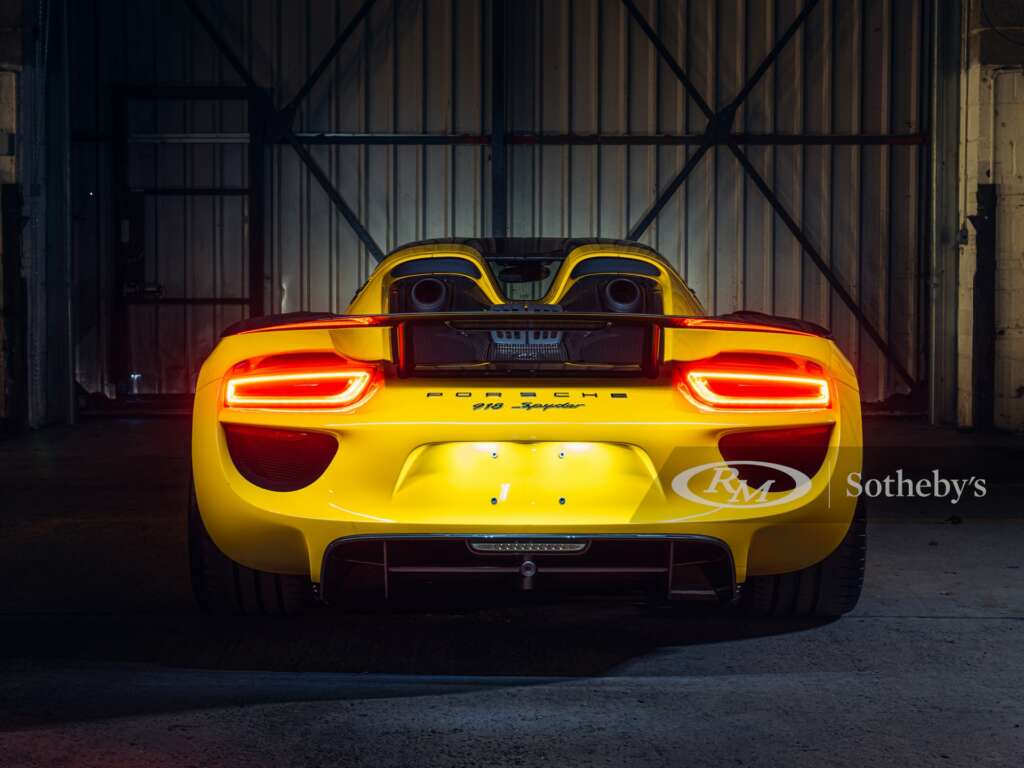 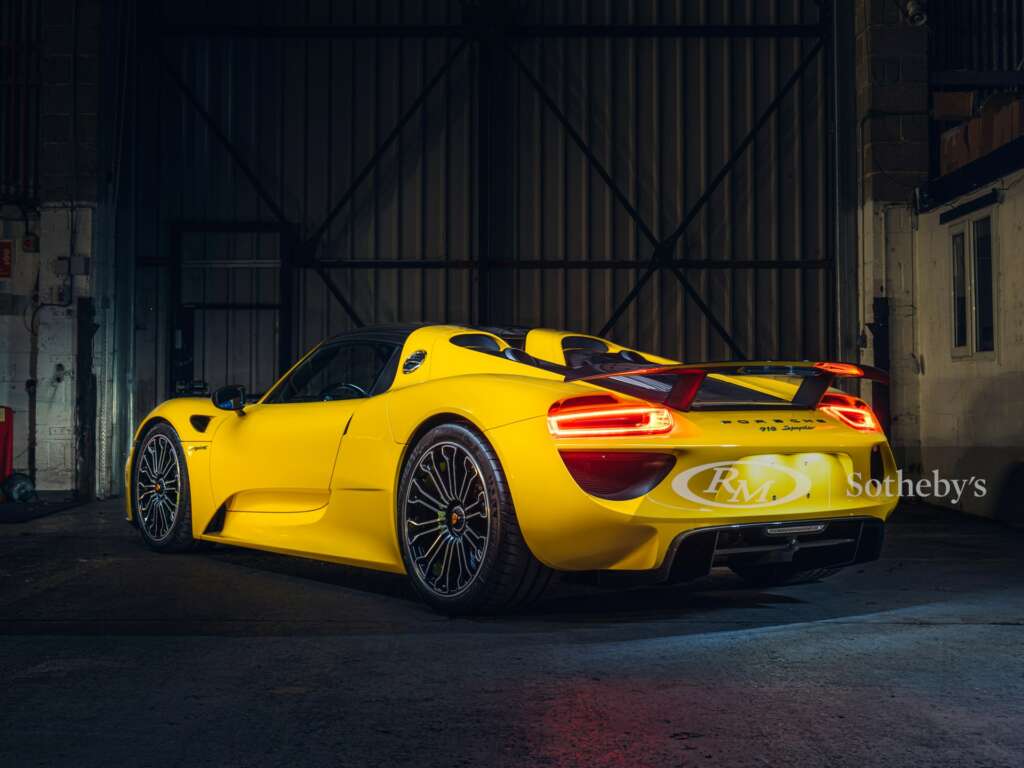 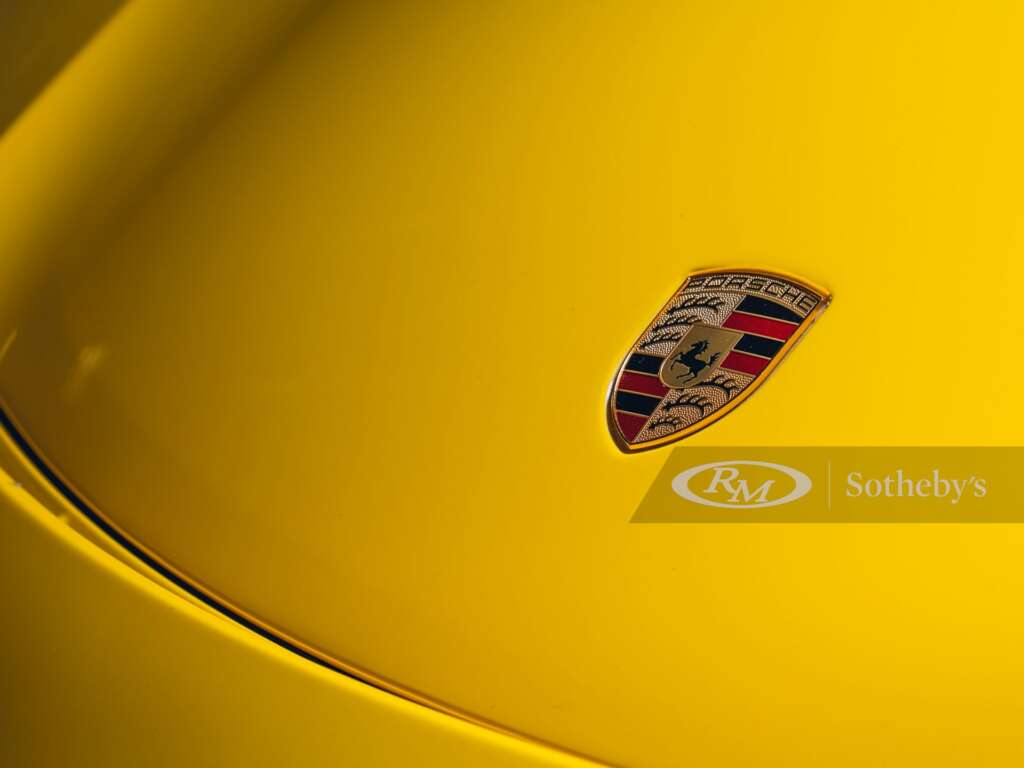 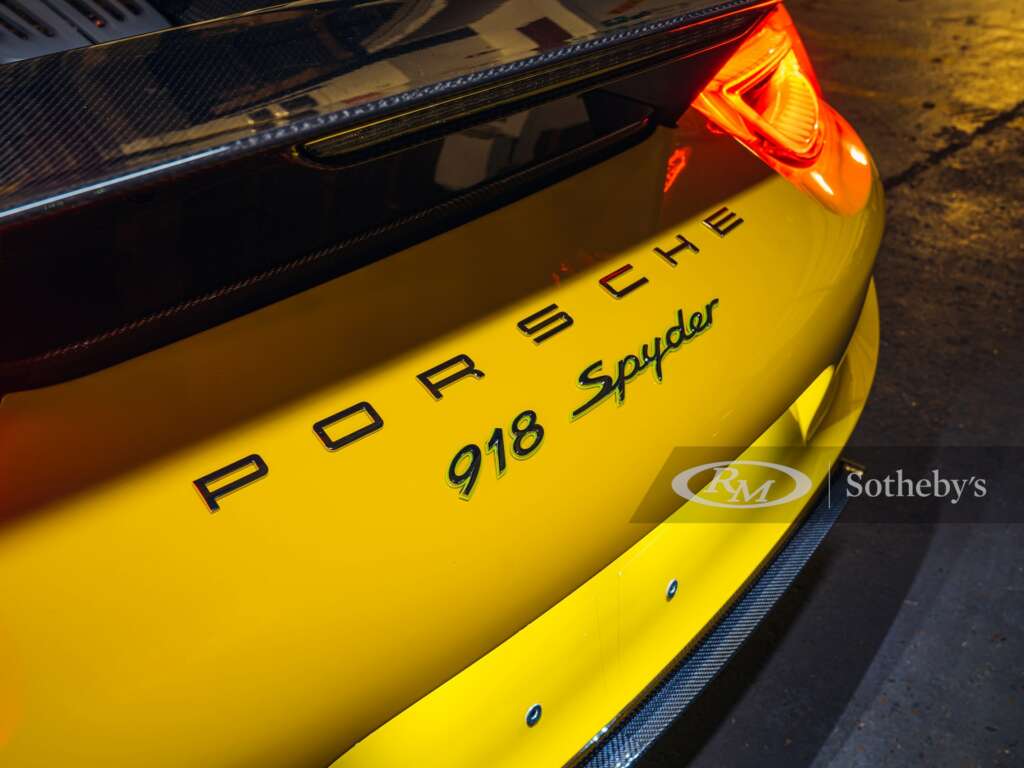 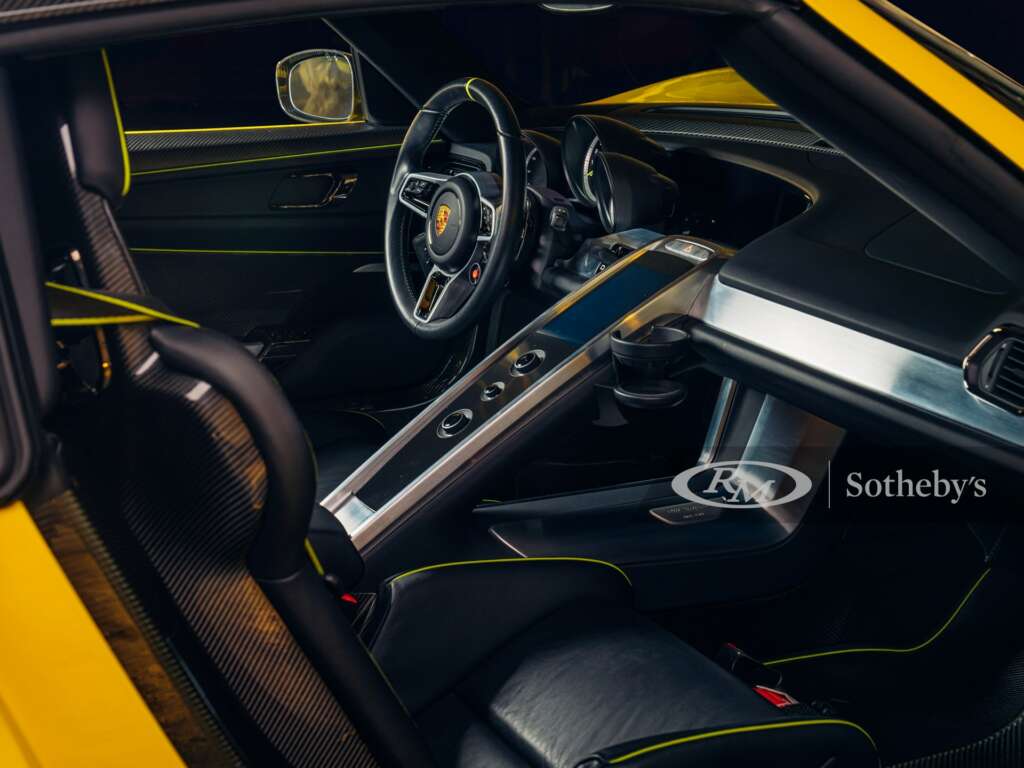