This example was supplied new to Switzerland and benefitted from both the above mentioned Weissach package, and additionally, utilising Porsche’s extended colour programme; Paint to Sample. Whilst a non-metallic white was available as a standard colour, this car is finished in Oryx White metallic – a clean, warm metallic pearl white, that holds the last of the light ever so well even in the short winter days. The car was imported into the UK and registered in 2015, where it immediately received full vehicle paint protection film by Topaz detailing. Serviced exclusively by Porsche Reading, this example has covered just 1,900 miles from new and presents superbly. This example is available to view at our showrooms outside London by appointment immediately.

The launch of the Porsche 918 has redefined the supercar and introduced a new group, known as the „hypercars“. The 918, along with the La Ferrari and McLaren P1, herald the arrival of a new generation of cars and this elite selection including the 918, offer technology never before seen in motor vehicles. The power of the internal combustion engine has been coupled together with hybrid technology to deliver a package that is quite simply mesmerising.

In the 918 Spyder, there are two electric motors present which delivers a combined 286hp – the highest power output of any production hybrid motor the world has seen. The hybrid battery, which is a liquid-cooled high-performance lithium-ion variant, offers an instantaneous boost to the electric motors and can be recharged using a conventional power output and charging lead, or can be recharged while the vehicle is in motion. In one such scenario, a portion of the vehicle’s kinetic energy is converted into electrical energy by the electric motors. Additionally, one of the electric motors can be driven by the engine, acting as a generator and thus charging the hybrid battery. As a result, driving in purely electric mode can be achieved, or the greater reserves of energy can be used to enhance the performance of the car around the track. The standard charging time for the vehicle when connected to a 240v supply is around two hours.

The combined power output is almost 900hp, with a 4.6-litre V8 engine providing a truly fantastic soundtrack. The top speed of the car is 214mph, with a 0-60 time of just 2.5 seconds and the car can accelerate from 49 to 74mph on a scarcely believable 1.2 seconds. With the roof removed, the experience delivered all the more extraordinary. The all-electric range is up to 19 miles and the car will achieve an average mpg of around 30. The car is very light; the monocoque tub, sub-frame, doors and body panels are manufactured from carbon-fibre reinforced plastic, while the bumpers are made from polyurethane. The suspension is forged aluminium wishbones, the PASM adaptive dampers fitted as standard. Another feature of the car is the 4-wheel steering which improves cornering, handling and stability. This is determined by the speed the vehicle is travelling at any given time and the rear axle can be manoeuvred in the same direction as the front wheels, or in the opposite direction to them.

At nearly £60,000, this Weissach option, can be identified by its exposed Carbon Fibre windscreen surround, roof panels and rear wing, along with its exclusive rear diffuser and magnesium-alloy wheels. Some sound deadening is removed and under the front clam, the gas struts are removed, replaced instead with a carbon-fibre ‘wand’ to support when open. As such, it cannot be completely retro-fitted. In keeping with the striking design and technology powering the 918 Spyder; the brake callipers and subscript are finished in Acid Green giving the nod to its hybrid powertrain. 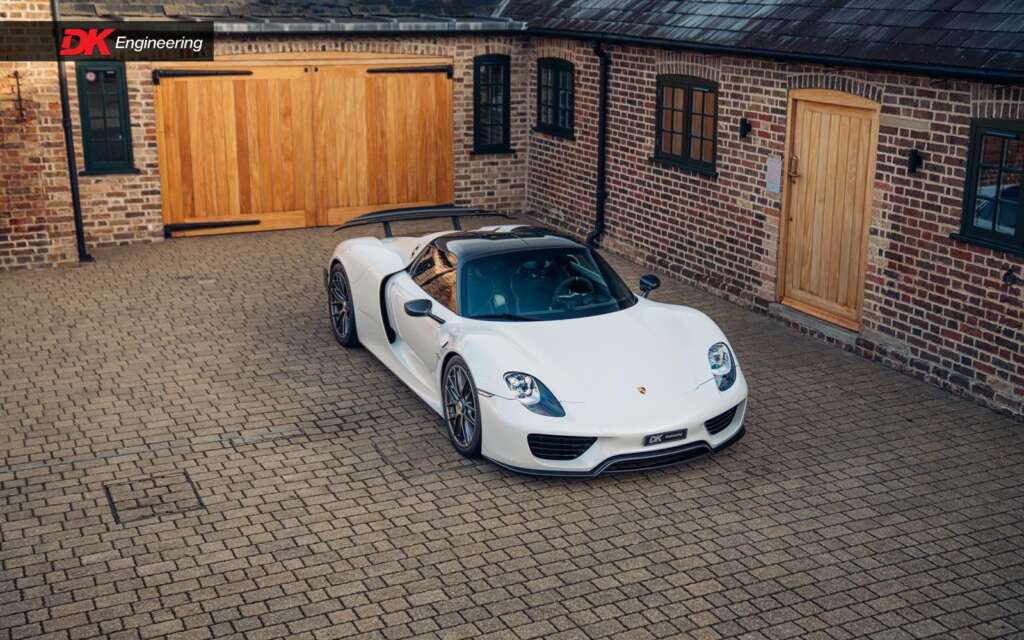 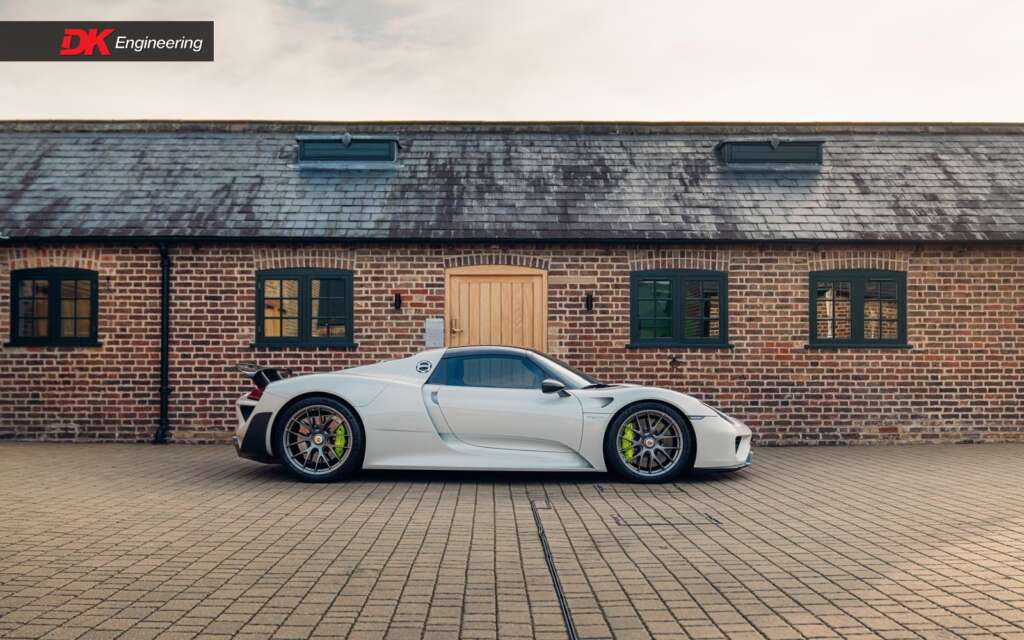 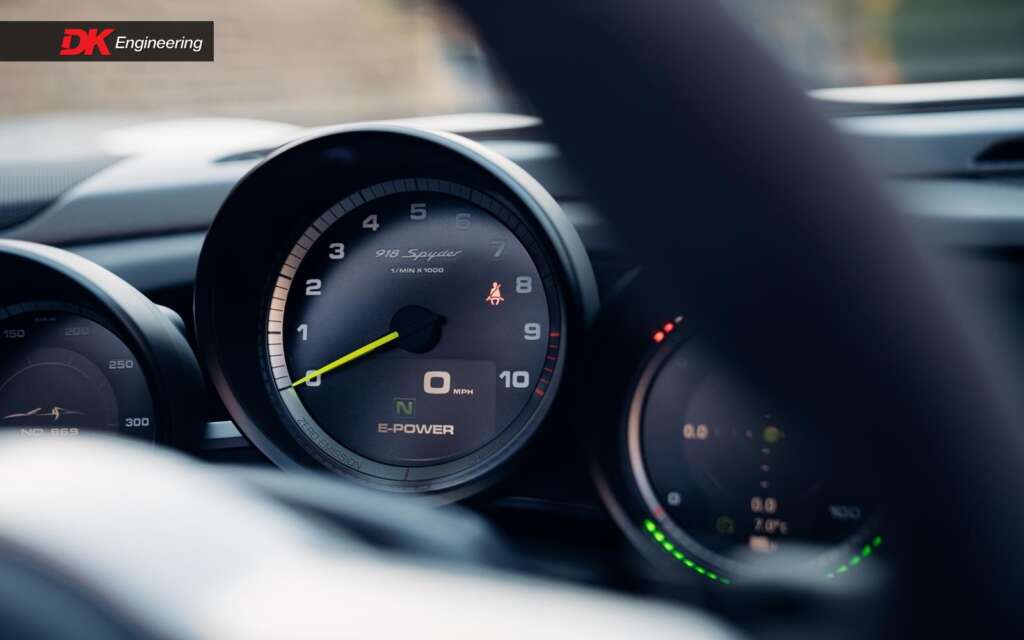 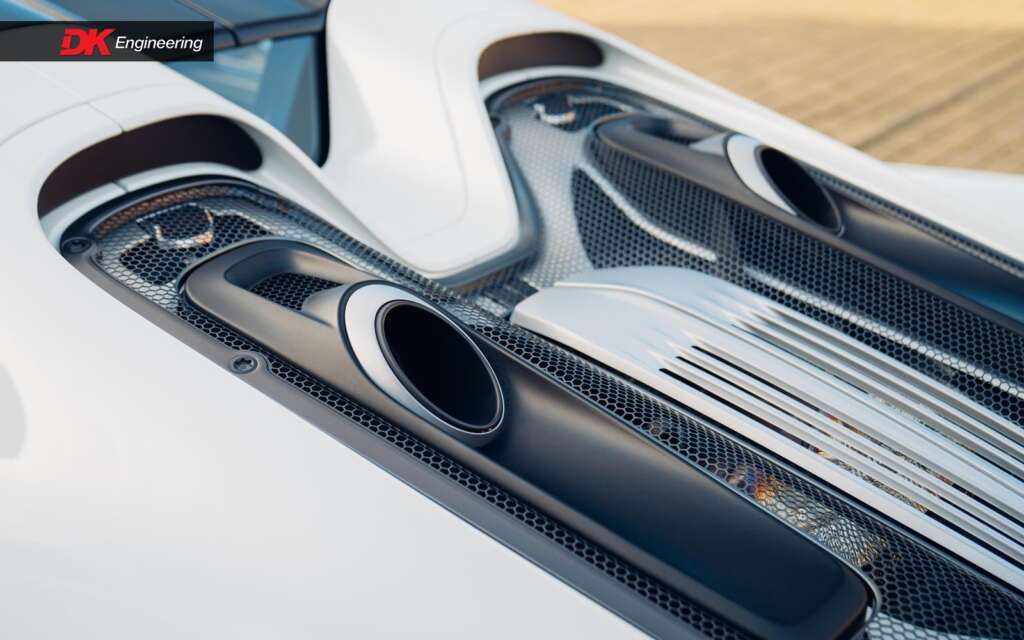