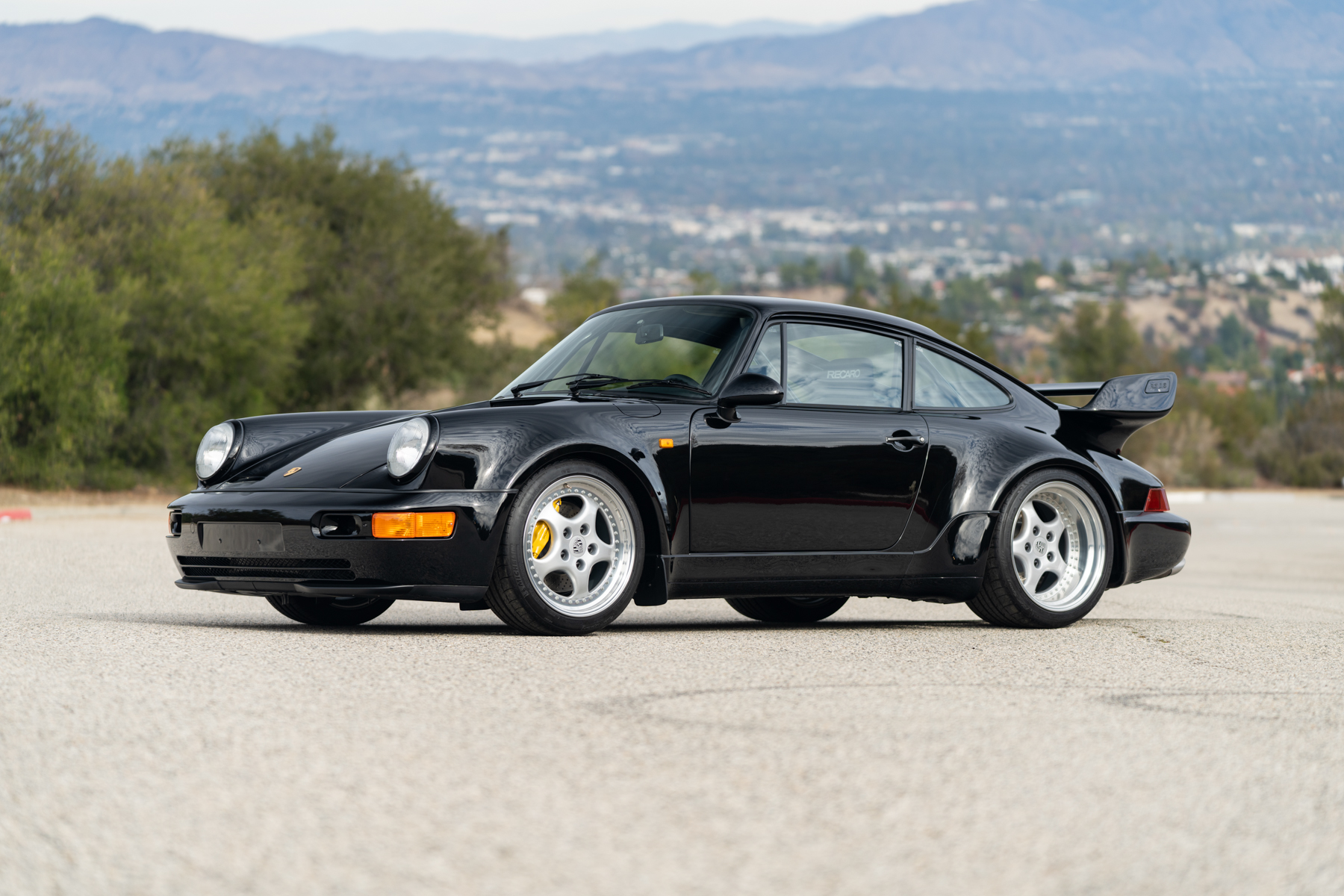 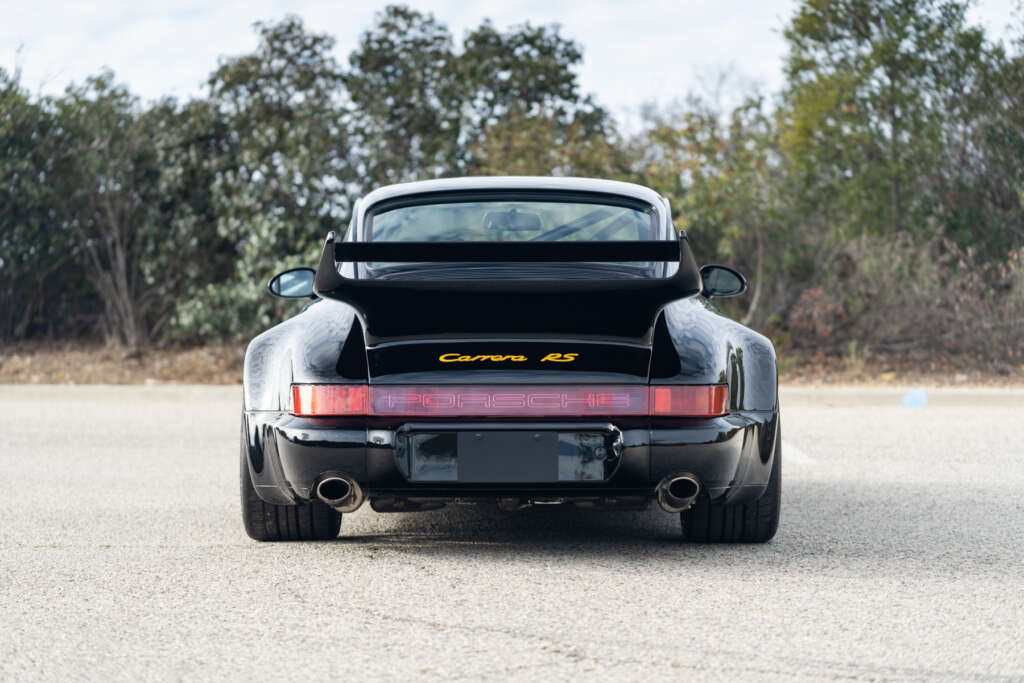 In the early 1990s, Jürgen Barth proposed an all-new 964-based racing car, one that would return the Porsche 911 to the pinnacle of GT racing. Unveiled in 1993, the new Carrera RSR 3.8 was an instant success. Not only did it capture class wins at Le Mans, Daytona, and Sebring, the RSR also delivered overall victories in the 24-hour races at Nürburgring and Spa.

To homologate the RSR, Porsche needed to build a road-going model that shared the general specifications of the race car. The result was the Carrera RS 3.8 – a development of the Carrera Cup and RS that was hand built inside Porsche’s racing department and engineered for maximum performance. Along with specialized suspension and braking components, the RS 3.8 featured a strengthened, seam-welded chassis, with lightweight glass and aluminum panels contributing to a curb weight of just 2,670 pounds. Other notable features included a 300 hp flat-six engine, Italian-made Speedline wheels, and an aerodynamic package with a deep front spoiler and adjustable rear wing.

In total, Porsche built just 55 examples of the Carrera RS 3.8. Of these, a mere 11 were ordered with the track-focused Clubsport package, designated by option code M003, which included a roll cage, Recaro racing seats, and competition harnesses.

The inherent rarity of these machines, coupled with the acceptance of limited-production 964 variants as blue-chip classics, has made the RS 3.8 one of the most collectible sports cars of the 1990s. Like its contemporaries, the Ferrari F40 and McLaren F1, the RS 3.8 is a genuine factory-built thoroughbred, constructed in extremely limited numbers and possessing a true motor sports pedigree.

The Carrera RS 3.8 presented here, chassis 497110, is an utterly unique, museum-quality example. It was built to order for Tobias Hagenmeyer, CEO of Getrag, the official transmission supplier to Porsche and many other automotive manufacturers; as such, it left the factory with numerous features not seen on any other RS 3.8.

As confirmed by copies of factory records, this Porsche was ordered with the desirable M003 Clubsport package, but was the only example supplied with full interior carpeting as it was intended for street use. Mr. Hagenmeyer also specified a Blaupunkt Paris radio and a distinctive color scheme – black with seat shells, harnesses, brake calipers, door pulls, lettering, and rear model designation all painted in contrasting yellow. Of the 55 examples built, just five RS 3.8s were originally finished in black.

In February 1994, Porsche invoiced Mr. Hagenmeyer for his bespoke RS 3.8 an

he personally collected the car in Weissach, Germany, with the plate number “LB-RS 380.” The car remained in his ownership for a brief period before being sold to Jacques Van Cleven, a Belgian Porsche enthusiast who had enlisted Jürgen Barth to help him find such a car.

Throughout his two-decade ownership, Mr. Van Cleven used the Porsche sparingly and carefully preserved it in original condition. The RS 3.8 remained in his care until its sale to the current owner, an American collector with a passion for limited-production air-cooled Porsches. Before importing the car into the US, the consignor had Porsche perform a comprehensive service at a cost of over 16,000 euros.

Now in the hands of its third owner, this unique Porsche remains in impeccable, original condition and is believed by the consignor to be the lowest-mileage RS 3.8 Clubsport extant, complete with factory paint and interior finishes. At the time of cataloguing, the odometer displayed just over 8,500 km (approximately 5,280 miles), a figure which is supported by service records on file. During his ownership, the consignor hired Jürgen Barth to inspect the RS 3.8 and prepare a report, given his role in the creation of the model and his personal history with this car. His report, which is included in the car’s history file, contains copies of rare factory production records and confirms that this RS 3.8 retains its rare custom-ordered equipment as well as its factory-supplied engine and transaxle. Also contained in the file is a letter from Porsche Classic, which confirms every unique detail of the car.

One of only 55 built by Porsche’s motor sport department, the 964 Carrera RS 3.8 is among the most rare and sought-after of the legendary 911 Rennsport models, a bloodline that can be traced back to the original 2.7 RS of 1973.

This ultra-rare Clubsport, tailor-made for VIP Porsche customer Tobias Hagenmeyer and preserved in exceptional original condition, is arguably the finest and most unique example of this rare breed. Never before exhibited or offered for public sale, this sensational RS 3.8 offers discerning collectors an opportunity to acquire one of the most significant and desirable air-cooled Porsches, possessing a provenance and specification that would be impossible to duplicate.