“The most old-fashioned car in Porsche’s lineup may also be our favorite.”– Basem Wasef, Automobile Magazine, 12/23/15

There are all manner of Porsche enthusiasts. But there is a common point of identification that unites them all, namely the desire to connect with a legendary 70-year brand heritage firmly rooted in performance. To be sure, as the Porsche marque has developed through all those years, while luxury touches and all manner of creature comforts have found their way into the cars coming from Zuffenhausen, performance dominates the character of the brand. So once in a great while, as a reminder of the company’s origins, Dr. Porsche’s works sends forth a car that single-mindedly captures the brand’s original focus: straightforward performance with a sort of minimalist design ethic. And a special and dedicated group of Porsche followers rejoices. Autoweek did just that in their headline above upon the launch of the 2016 Porsche Boxster Spyder. 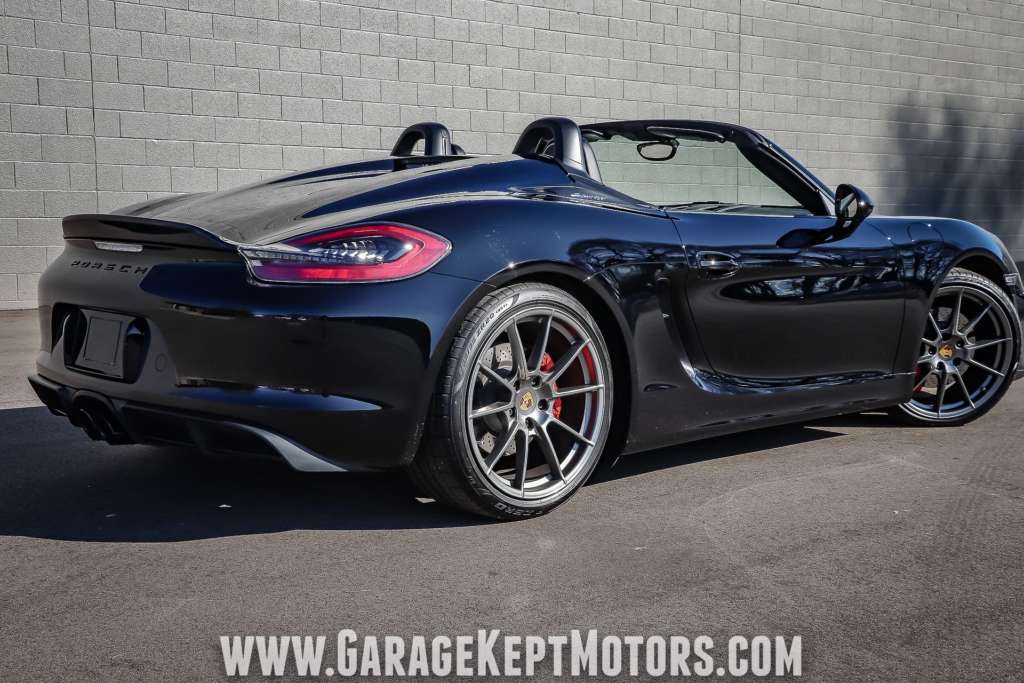 The triple-black 2016 Boxster Spyder offered here beckons the Porsche enthusiast with an unmatched combination of performance, appearance, and yes, even comfort. The automobile is visually stunning. The code A1 black color is one of the longest running paint choices from the Porsche palette, so it’s a perfect choice for a car that taps into the marque’s heritage. The black fabric top, black leather (including the optional dash leather and the unique steering wheel blessedly free of any buttons) black alcantara interior touches, black-faced gauges, and piano-black dash trim blend classic style with a hint of the sinister. Silver touches on the deviated stitching, old-school door pulls, and Spyder logos embroidered on the seatbacks (with similar identification in metal just aft of the doors), and the metal-trimmed six-speed shifter knob all offer a touch of contrast. On the car’s exterior, the black Spyder logo on the rear deck, the Carrera GT-inspired look of the entire front fascia, fenders, and bi-xenon headlights, the red brake calipers, the twin-hump aluminum rear deck-lid sloping to the fixed spoiler, and the twin black center-fixed exhaust pipes combine for an unmistakably unique look. The car was also upgraded at Label Motorsports with a EVOMsit EVR425 Performance Package, IPD Competition Plenum Air Intake System, and 981 Short Shift Kit. LED side lights installed as well. All work done in May of 2019.

A photo of the car’s full option list is among the more than 185 high definition shots available at GarageKeptMotors site. There’s also a short video of the car, including the delightful audio of the engine coming alive.

But as we mentioned, this is a true performance automobile.

Automobile magazine: “The Boxster Syder yanks the 3.8-liter flat-six from the 911 Carrera S, producing 375 horsepower and 309 lb-ft of torque in this application. For those keeping score, that’s 35 hp and 29 lb-ft more than the Cayman GTS, but 10 hp shy of the GT4 (which is 56 pounds heavier). The flyweight roadster can hit 60 mph in a claimed 4.3 seconds, a tenth behind the GT4 but four-tenths quicker than the GTS, and it can reach a terminal velocity of 180 mph.” And “…when the engine winds into the second half of its powerband, a smooth rush of g-forces sets you back in your seat, accompanied by an annoy-the-locals exhaust note.”

It’s probably inevitable that a model like the Boxster Spyder prompts debates among Porsche enthusiasts (a group that relishes a good debate anyway), and particularly among those who champion the 911 over the Boxster. While there may be no one answer to this debate that will satisfy every one of those brand enthusiasts, here’s where Autoweek came out…

“Our advice: Stay the course and get the Boxster Spyder. It sits at maybe the optimal point between the raw, hairy Porsches of James Dean’s past and the hypercar science experiments of Porsche’s turbocharged, hybridized future. It’s the kind of car we’re less and less likely to see down the road, especially from Stuttgart. To compare it to the ever-evolving, ever-improving 911 is to miss the point entirely.”

And Motor Trend put it even more succinctly: “…the new Spyder is a glorious, shrieking, joy buzzer of a beast of a roadster.”

Call us to arrange a close-up inspection of this rare and remarkable, extremely low-mileage sports car.

(Please note: If you happen to be viewing this 2016 Porsche Boxster Spyder on a website other than our Garage Kept Motors site, it’s possible that you’ve only seen some of our many photographs of this vehicle due to website limitations. To be sure you access all the more than 185 photographs, please go to our main website: GarageKeptMotors.) 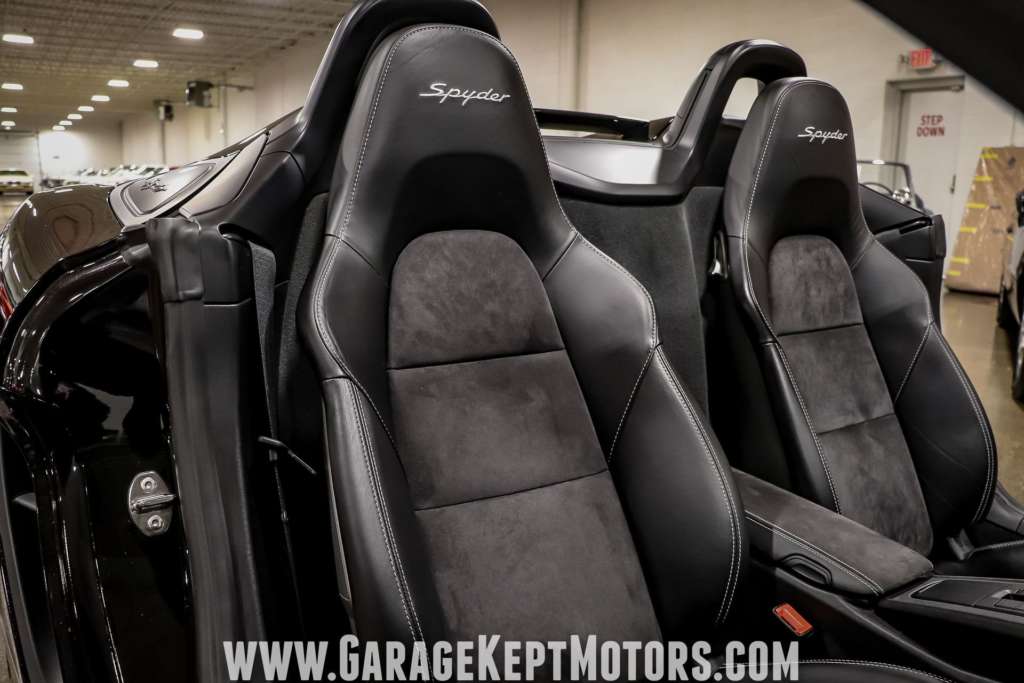 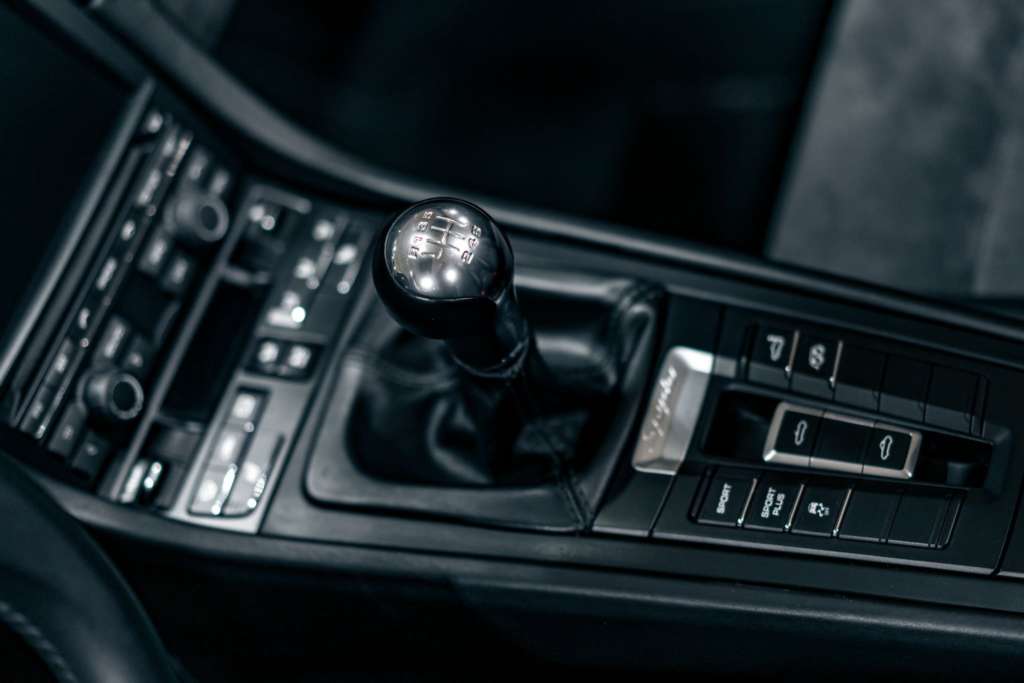