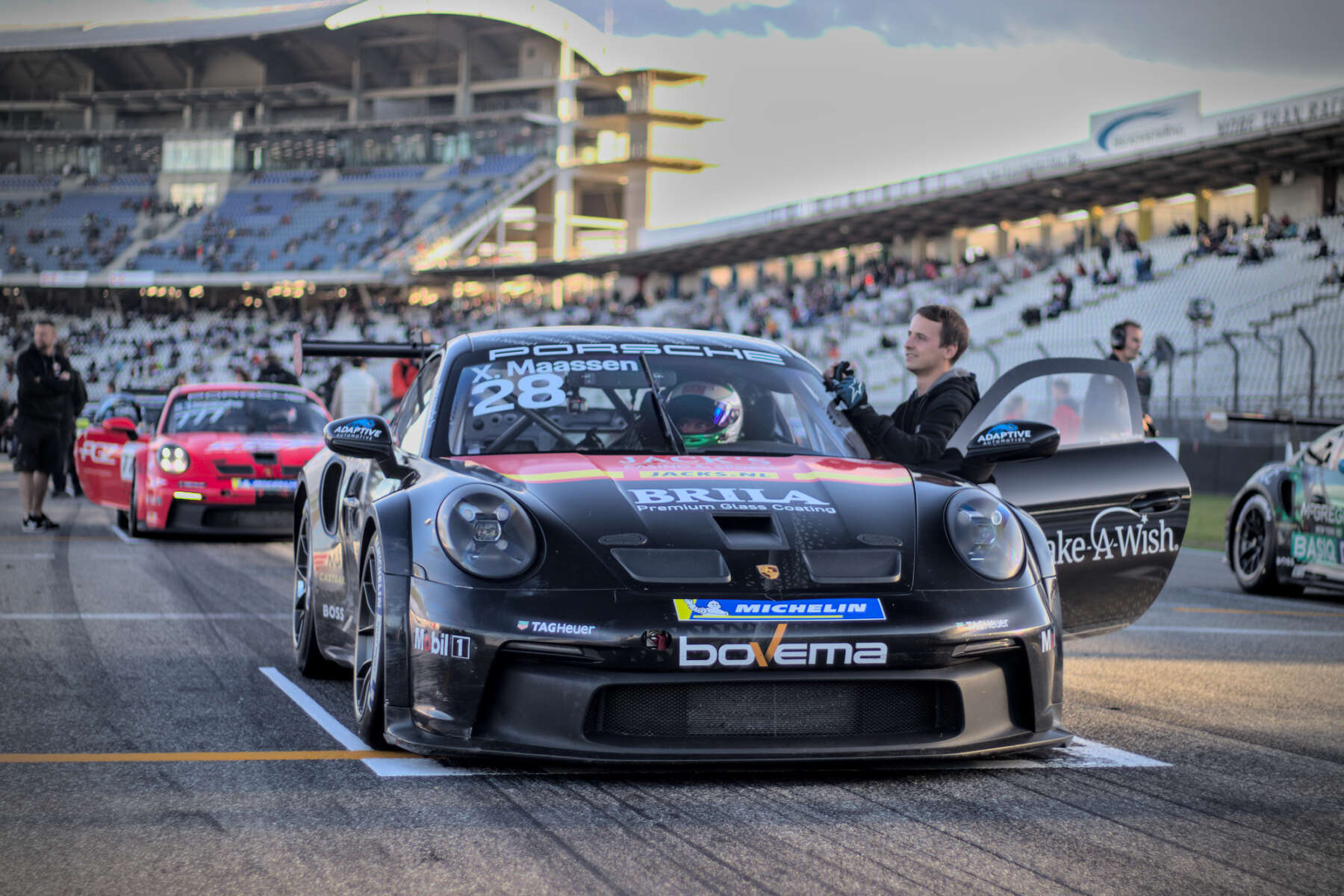 This year’s finale of the DTM (German Touring Car Masters) and Porsche Carrera Cup Benelux took place at the Hockenheimring. Invited by our partners of Porsche Center Eindhoven we were allowed to plunge into the paddock and experience at first hand what motorsport really means. We take you on a journey through the paddock and the supporting program around the DTM.

On Saturday morning we passed the main entrance to the Hockenheimring and were greeted by a sonic inferno that would give goose bumps to any Porsche fan. This was because the Porsche Carrera Cup Benelux was making a guest appearance at Hockenheim as part of the supporting program of the German Touring Car Masters. At 9 a.m., the Porsche 911 GT3 Cup, 22 cars in total, opened the round with qualifying for Race 1. Believe me, the soundtrack of these 510-hp rockets is to die for.

The Porsche Carrera Cup Benelux runs in a total of three classes. In addition to the absolute professionals who compete in the Pro-class, there is also the Pro-Am and the Am-class. The Pro-Am-class is made up of the fastest gentleman drivers with a motorsport background, while the Am class is reserved for gentleman drivers without a motorsport background and novices. The Am class is the only one that runs with ABS activated. There are no other driving aids in the Carrera Cup.

DTM changed its face for the 2021 season. Since then, the DTM has stipulated vehicles according to GT3 regulations. This opened the door for numerous manufacturers. Instead of two manufacturers as in 2020, there were five in 2021 and even six in 2022. Among the participants for the first time in 2022: Porsche. In addition to the Porsche 911 GT3 R, vehicles from Audi, BMW, Ferrari, Mercedes-AMG and Lamborghini are also on the grid.

This brand diversity also made the soundtrack of the subsequent DTM qualifying a pretty special experience. From Porsche’s flat-six to BMW inline sixes, Mercedes and Ferrari V8s, as well as Audi and Lamborghini V10s, there was a wide spectrum of sounds. It was also clearly visible from the grandstand how differently the cars move around the track, with the Porsche being extremely stable on the brakes, deep into the turns.

Due to the so-called Balance of Performance, a system for adjusting the performance of the cars via additional weight and air-intake-restrictors, the racing is insanely close. After qualifying, 25 of 27 drivers were covered by just nine tenths of a second. Such close gaps are always proof of the drivers’ quality. So it is not without reason that the DTM is known, being one of the strongest GT3 championships in the world.

In its very first year, the KÜS Team Bernhard Porsche was already a title contender

With Austrian Thomas Preining behind the wheel, the Porsche 911 GT3 R from the KÜS Team Bernhard of three-time Le Mans winner Timo Bernhard unfolded its full potential. After slight teething problems at the start of the season with four retirements in six rounds, Preining established himself as one of the usual suspects up front. Victories at the Norisring and Red Bull Ring meant he even came to the finale in title contention. Dennis Olsen in the SSR Porsche also secured a race win for the 911 GT3 R at Spa.

Unfortunately for Bernhard’s team, everything that could go wrong did go wrong. Thomas Preining hit the guard rail hard after a collision with David Schumacher’s Mercedes. While the driver thankfully wasn’t hurt, the chassis could not be saved. Therefore Preining was also unable to score any points on Sunday. Olsen’s SSR Porsche was hit even worse. In front of the east grandstand, the car hit the track barrier so hard that the chassis and engine of his Porsche 911 GT3 R came to a separate halt.

The title went to Sheldon van der Linde in the BMW on Sunday, ahead of Lucas Auer on Mercedes-AMG, Audi-veteran Rene Rast and Lamborghini-star Mirko Bortolotti. Thomas Preining and KÜS Team Bernhard thus had to settle for fifth overall. For a debut season in the DTM, however, this is still worthy of all honor.

So there was plenty on offer for Porsche fans at Hockenheim. The Porsche Carrera Cup Benelux was certainly the absolute highlight of the DTM supporting program. PCC’s Benelux series alternates between the DTM, the ADAC GT Masters, the FIA World Endurance Championship, and the European Le Mans Series. It offers genuine, fair motorsport without many driving aids. Professionals, amateurs and racing novices compete on one track here. That makes it all the more appealing.

But there is also plenty for the fans to see with the other series. You’ve got the DTM Trophy, a GT4 junior class, the BMW M2 one-make cup and the DTM Classic with historic vehicles to watch. The racing action is at a great level across all classes. And the event itself is excellently organized. There were no long queues to be found anywhere.

Unlike in many other motorsport classes, spectators at the DTM can simply buy paddock tickets for a reasonable amount of money. Nevertheless, it’s not crowded in the paddock, but absolutely relaxed. As a fan, you can move around completely freely and take photos everywhere, talk to drivers and mechanics. Here, you can still get your hands on motorsport – enjoy pitlane-romance.

It’s also very impressive how much attention to detail even the supposedly smaller teams invest in their race cars. And you could watch them go through there procedures. Thanks to not many barriers in front of the team tents in the Carrera Cup. Even with the smallest teams from the DTM Classic, everything was meticulously set up, the tents highly professionally equipped.

The absolute highlight for Porsche enthusiasts: Grid walk in the Porsche Carrera Cup

Before the first round of the Porsche Carrera Cup Benelux season finale, a childhood dream came true: the grid walk was on the agenda. Making your way through eleven starting rows, all filled with Porsche 911 GT3 Cup cars, is extremely special. In absolutely golden autumn weather, the entire grid was shrouded in picturesque light just before sunset. A sight I’m sure I won’t soon forget. But see for yourself.

Many thanks to our partners from the Porsche Center Eindhoven. The Porsche Carrera Cup Benelux and also the DTM I will certainly visit again. I recommend the same to every car lover, whether a motorsport enthusiast or not. The emotions of the podium finishers, the smell of champagne after the award ceremony, the excitement at the start of the race – all this makes a visit to a race weekend an unforgettable experience.

The championship title was won by 21-year-old Briton Harry King. He managed to achieve two unchallenged race wins at Hockenheim. Congratulations! By the way, congratulations also to Ad Geerts, as well. The full-time manager of PZ Eindhoven secured 8th position in the Am-class championship. Chapeau!