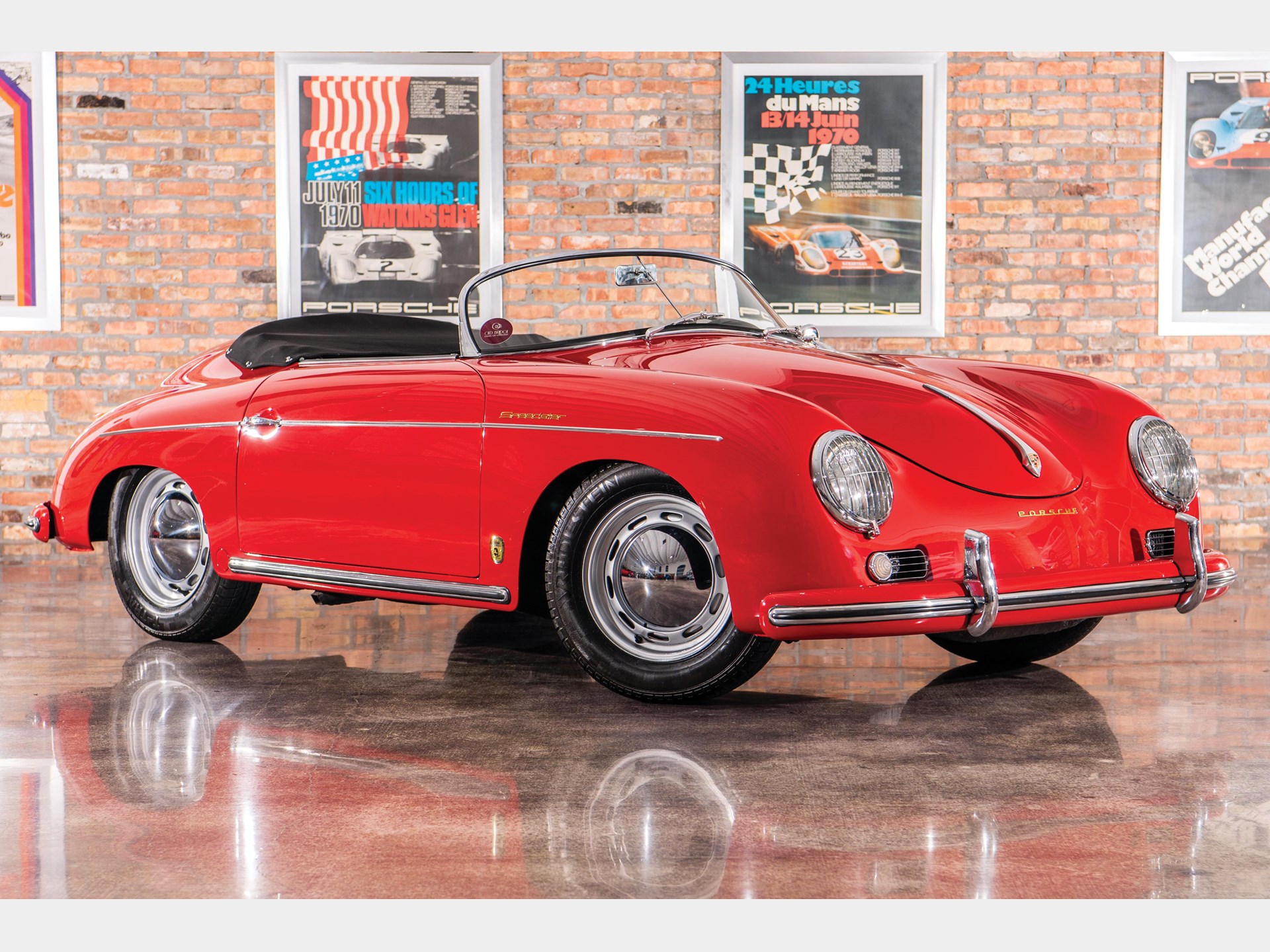 The arrival of Porsche’s spartan 356 Speedster revolutionized the world of low-cost, high-reward sports cars, which had been previously dominated in the early 1950s by small British roadsters. Seeking entrée to this growing market segment, New York importer Max Hoffman urged Ferdinand Porsche to provide him with a price-competitive model, one that he could sell for a base price of just under $3,000. The bare-bones Speedster, with its removable windshield and pair of thin bucket seats, was exactly what Hoffman had asked for. Production of these hand-built gems began in 1954, and through the end of the series in 1958 a mere 2,922 examples had been delivered, with the factory making steady improvements to the design every year. Speedsters were not only well engineered and well built, but fun to drive, and quickly proved to be dominant in their amateur racing classes across the country. Today no serious Porsche collection is complete without a 356 Speedster.

Offered here is a fine example of a numbers-matching 356 A 1600 Speedster, whose factory Kardex, a copy of which is included on file, informs that it was completed 9 May 1957. The 356 left the factory with sealed-beam headlamps—indicating that it was built for the US market—and finished in red with a black leatherette interior and cloth top, as it appears today. The car was also fitted with 356 coupe seats rather than the standard Speedster buckets. It is powered by a 70 bhp twin-carb, 1,582 cc air-cooled four-cylinder engine, no. 65352, with a four-speed manual transmission and drum brakes.
Previous owners include Mr. Tom Scott, a national PCA concours judge, and Mr. Larry Grace, a prominent Denver businessman and collector. Under the previous ownership, the Speedster was stripped to bare metal and repainted in its original color. It was fitted with a new and correct interior with refinished gauges, the original chrome was replated, and the wheels were also replaced with a set of dated stock wheels. Furthermore, the engine was removed, detailed, and the seals replaced, and the gas tank was also completely restored. It is presented with a highly detailed engine bay, and the restoration was recently freshened with new carpeting, a new top, and selectively restored brightwork. The consignor states that this fine Speedster is supplied with a correct spare wheel, tool kit, owner’s manual, and tonneau cover. 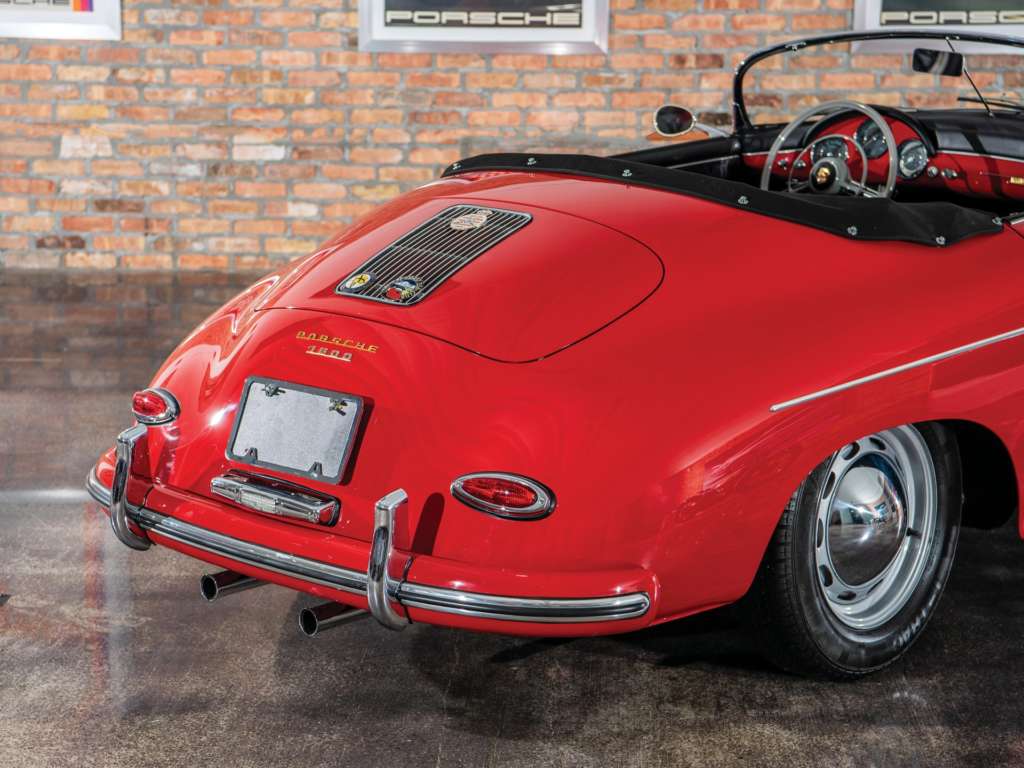 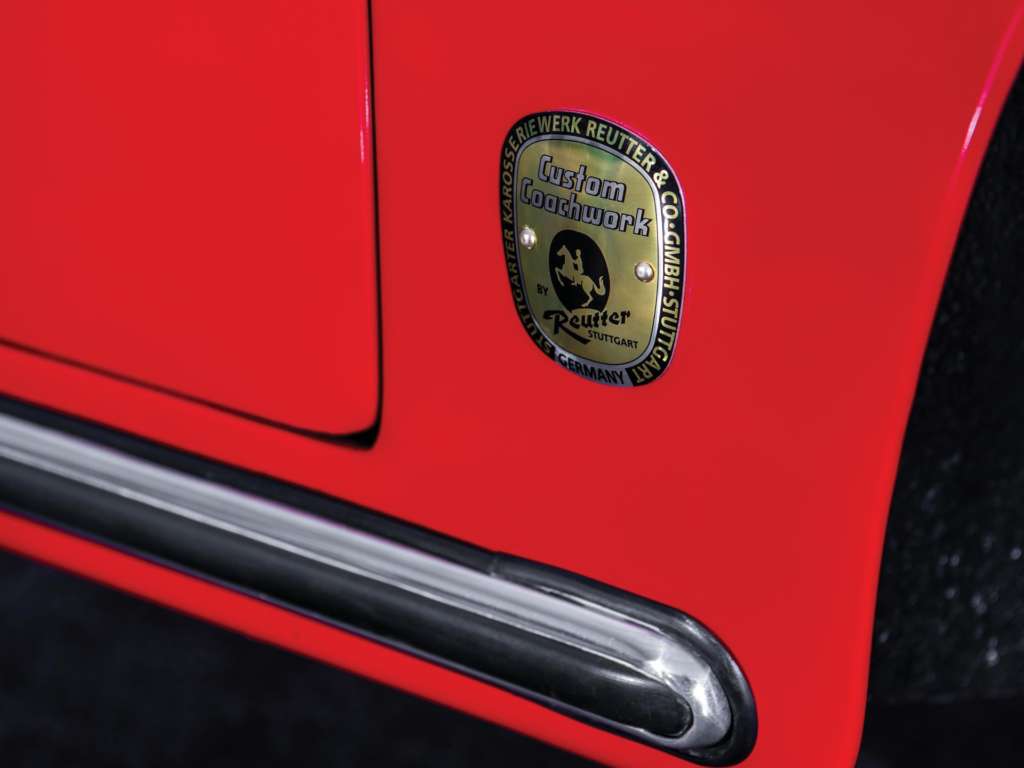