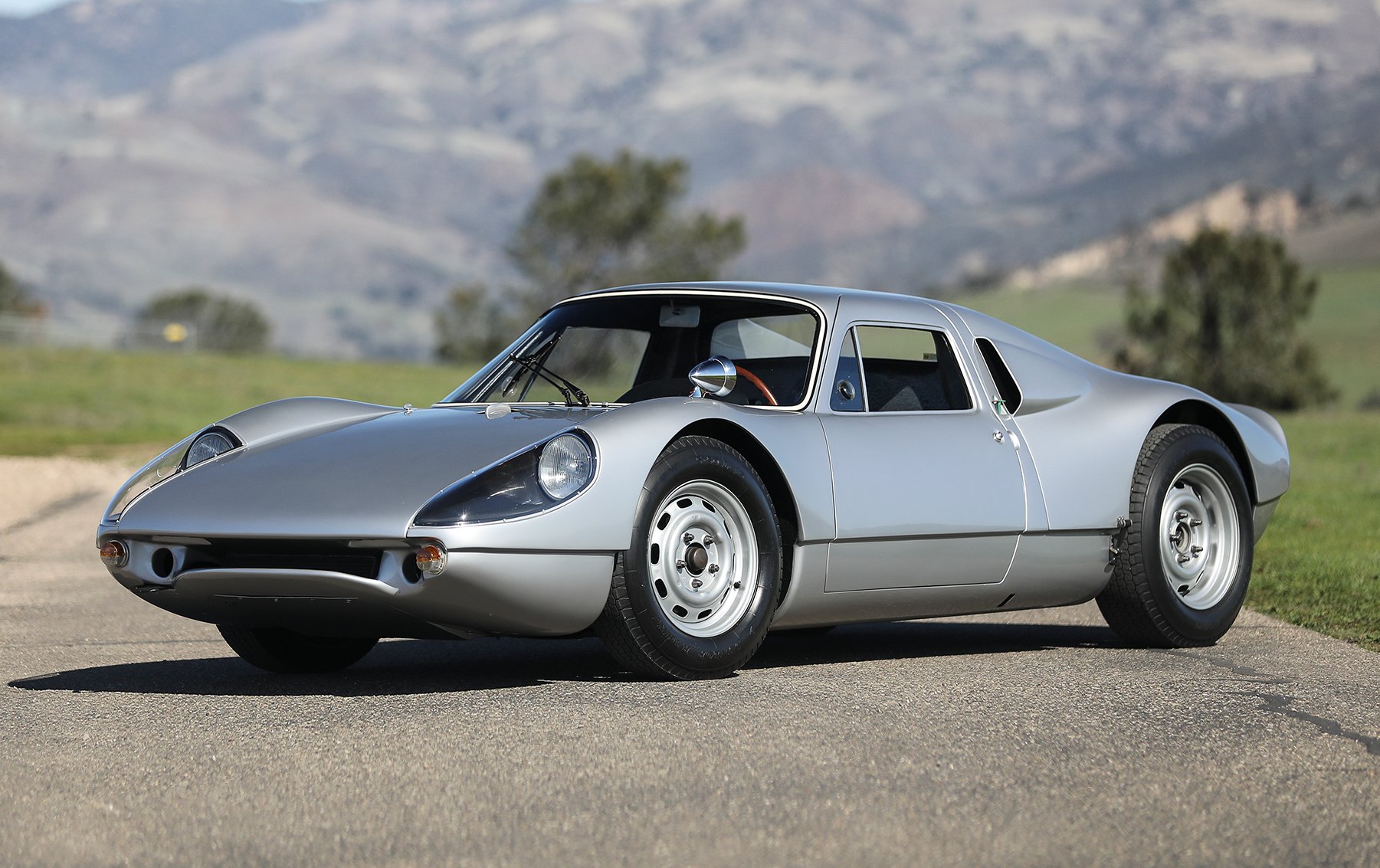 Debuted in November 1963, Porsche’s groundbreaking 904 Carrera GTS is a pivotal model in the firm’s history – the first of the all-new “plastic” generation and the last to utilize Ernst Fuhrmann’s four-cylinder, four-cam engine.

Designed from a clean sheet by F.A. “Butzi” Porsche, the 904 was a state-of-the-art sports car, featuring a boxed steel chassis, lightweight fiberglass bodywork, four-wheel disc brakes, five-speed transaxle, and race-tuned type 587/3 engine. The car’s unique design also produced outstanding aerodynamic qualities, which allowed it to achieve speeds that far exceeded Porsche’s earlier sports racing cars. Despite the model’s many technical and material advances, the 904 was the last Porsche developed as a true dual-purpose car – equally at home on road or track.

Throughout 1964, its first full season in racing, the 904 proved extremely successful, capturing a stunning 1-2 finish at the Targa Florio, along with class wins at Goodwood, Le Mans, Monza, Montlh ry, Mugello, Nürburgring, Reims, Sebring, Silverstone, and Spa. Not only was the 904 effective, it was also remarkably versatile, proving itself capable in endurance events, sprint races, hill climbs, and rallies.

For the 1965 season, Porsche built 12 new cars for factory use, no. 906-001 through no. 906-012. This group included several ultra-lightweight hill climb cars, known as Bergspyders, as well as updated six-cylinder versions of the 904 called the 904/6 or Carrera GTS6. These cars were equipped with a competition-prepared version of the new type 901 six-cylinder engine that had been developed for the 911.

In all, Porsche built just six of these 904/6 coupes, which first appeared at Montlh ry and Monza late in 1964. These specially prepared works racing cars possess several key characteristics that distinguished them from the earlier four-cam-powered 904s, the most notable being large, rectangular-shaped “elephant ear” air intakes, a centrally located fuel filler, and short doors with pull-up rather than sliding Plexiglas windows. Porsche also made myriad improvements to the chassis, body, and drivetrain, and at least two late-production 904/6s featured a new shark-nose front end, including this example.

The Porsche presented here, chassis 906-011, is among this exclusive breed of 904/6s built for the works racing team’s use throughout the 1965 season.

Constructed in late 1964, 906-011 made its debut at the Le Mans test weekend in April 1965. For this important event, Porsche entered two 904s – the sixcylinder 906-011 and chassis 904-082, which had been fitted with a two-liter, eight-cylinder type 771 engine. As noted in period event coverage, the two works-entered 904s were driven by Gerhard Mitter and Herbert Linge and recorded the 9th and 10th fastest laps, setting times bettered only by Ford GT40s and mid-engine Ferrari prototypes.

According to marque historian Jürgen Barth, the Porsche works team entered 906-011 in two additional events during the 1965 racing season: the Mont Ventoux Hill Climb in June and the Solitude Grand Prix in July. Following these three outings, Porsche retired 906-011 from competition use to focus on developing their latest model, the 906 Carrera 6.

On January 31, 1966, Porsche transferred 906-011 to the sales department. By this time, the suspension and driveline had been removed and the odometer showed a total mileage of 8,700 km. During the winter of 1967–1968, this car was sold, along with two other 904 chassis, to Vasek Polak, the well-known Southern California-based Porsche dealer and racer. Upon its arrival, Polak’s lead race mechanic Dieter Inzenhofer (later of ANDIAL fame) prepared 906-011 for SCCA A-production racing, which required the car to run a four-cam, four-cylinder engine and have a 904 rather than a 906 chassis number. At this point, 906-011 was given the fictitious identity of “904-109,” a number intentionally chosen to avoid interfering with any factory-built production 904.

In 1969, Polak entered the car in SCCA races at Santa Barbara, Riverside, and Tucson, Arizona, where it was driven by Don Pike. His best result came at Santa Barbara, where he won, taking the flag a full 28 seconds ahead of the 2nd Place finisher.

Later that year, Polak sold the 904 to Brent Doell and Gerry Gregory of Palos Verdes, California, and they entered it in three races in late 1969 and early 1970. Repainted black and fitted with American Racing mag wheels after an accident at the SCCA race in Riverside, the Porsche was sold to Jim Cook of Cypress, California, in summer 1970. For the remainder of that year, Cook raced the car at Willow Springs, Sears Point, Phoenix, Road Atlanta, and Riverside, where it was involved in a collision with a Corvette and caught fire. After being repaired and repainted silver, the 904 donned Vasek Polak sponsorship, as Cook had entered into an agreement whereby Dieter Inzenhofer would maintain the car for him throughout the 1971 season. Cook then raced the car at Willow Springs, Pacific Raceways, Vacaville, Riverside, Laguna Seca, and Road Atlanta, capturing several podium finishes along the way.

In 1972, Vasek Polak sold the 904 to Dr. Jack Zimmer, who owned the Karrousel Porsche-Audi dealership in Hopkins, Minnesota. He repainted the car green and then sold it to David Sablan of Tacoma, Washington, in spring 1973. During his ownership, Mr. Sablan drove the 904 on the road and entered it in PCA autocross events.

In 1980, well-known vintage racer Jamey Mazzotta acquired the Porsche from Mr. Sablan, entered it in the 1981 Monterey Historic Automobile Races, and then sold it to his brother, Joey, who continued to race it until it suffered a mechanical failure in 1985. At this point, the Porsche was sold to noted Southern California Porsche collector Jeff Lewis, who commissioned Kevin Jeanette of Gunnar Racing to perform a complete restoration.

While restoring the 904, Jeanette recognized its many unique late-production features and, after conducting extensive research with marque experts, re-established its identity as 906-011. As a result, the car was refinished in the correct silver livery and fitted with a proper two-liter, six-cylinder engine rebuilt by Porsche specialist Jerry Woods. The restoration process is thoroughly documented in an album of photographs included in the car’s extensive history file.

For the past 35 years, this rare 904/6 has been owned by knowledgeable American collectors and successfully campaigned in historic races in the US and Europe, including multiple editions of the Monterey Historic Automobile Races, Le Mans Classic, Tour Auto, and the Goodwood Revival. Well regarded among Porsche connoisseurs, 906-011 has been exhibited at Rennsport Reunion III, Luftgekühlt 5, and was even displayed at the North Carolina Museum of Art, taking part in a curated exhibition titled Porsche by Design: Seducing Speed. Over the past three decades, this 904/6 has been featured in numerous books on the marque and model, and meticulously prepared by the leading names in Porsche restoration, including the renowned Emory Motorsports, which has maintained the car for its current owner. This work included repainting the bodywork in period-correct silver, and the Porsche is accompanied by spare wheels, tires, and assorted parts.

In the April 1988 issue of Panorama magazine, Henry Payne perfectly describes the unique appeal of the 904/6: “The six-cylinder 904 is, to many Porsche enthusiasts, the last true GT car that could be driven anywhere in any weather with performance unmatched on any highway by any production car to this day.” Three decades later, this statement rings true, ably demonstrated by this magnificent ex-works 904/6. Beautifully presented and reported to be mechanically “on the button,” 906-011 is ready for further adventures, whether on the racetrack or the open road.

Vasek Polak, Hermosa Beach, California (acquired from the above in 1968)

Brent Doell and Gerry Gregory, Palos Verdes, California (acquired from the above in 1969)

Jim Cook, Cypress, California (acquired from the above in 1970)

Dr. Jack Zimmer, Hopkins, Minnesota (acquired from the above in 1972)

David Sablan, Tacoma, Washington (acquired from the above in 1973)

Jamey Mazzotta, Bella Vista, California (acquired from the above in 1980)

Joey Mazzotta, San Diego, California (acquired from the above in 1981)

Jeff Lewis, Newport Beach, California (acquired from the above in 1985)

Dean Meiling, Incline Village, Nevada (acquired from the above in 1999)

Stephen Dudley, Wisconsin (acquired from the above in 2006)

Cameron Healey, Portland, Oregon (acquired from the above in 2009) 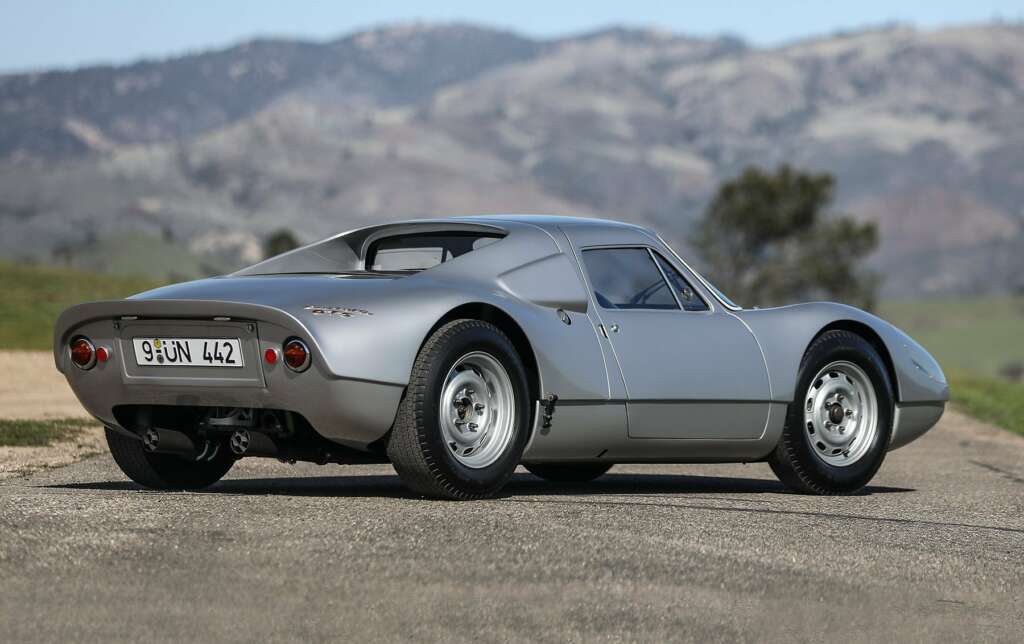 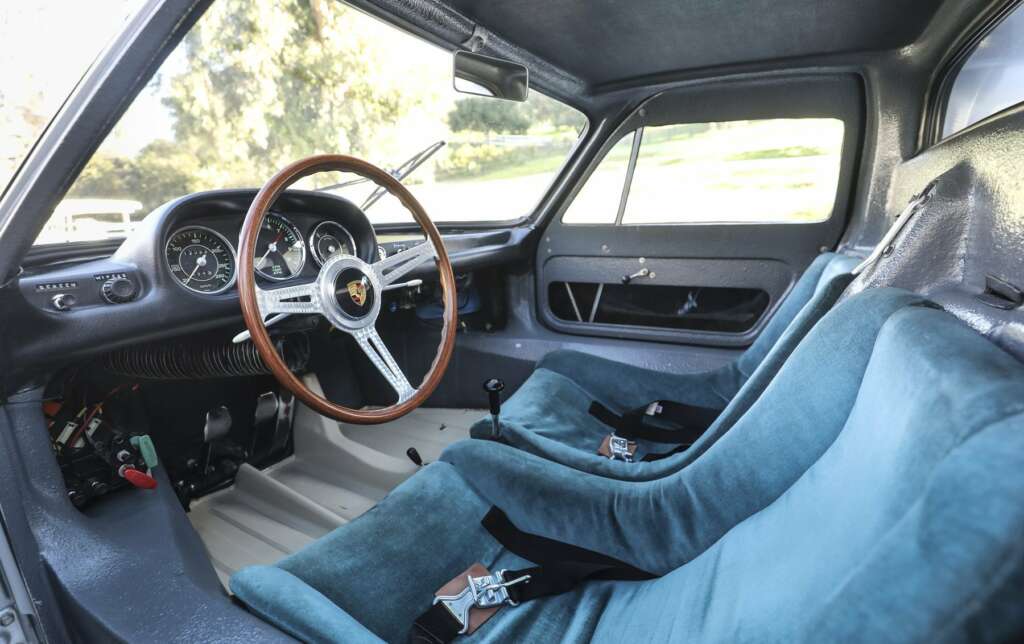