One of just 1,580 Carrera RS 2.7 examples constructed between 1973 and 1974 – Original German-market car, supplied to Hahn Porsche of Fellbach, near Stuttgart – Numbers-matching type 911/83 engine – Presented in original colours of Grand Prix white with red detailing – Immaculately restored in 2010–2011 by Roock Sportsysteme, with only minimal use since Incredibly, in May 2017, Porsche passed the milestone of their one millionth 911 rolling off the Zuffenhausen production line, some 54 years after the first. Yet paradoxically it is a variant accounting for little more than 0.1 per cent of total 911 production which remains the car’s defining incarnation: the incomparable Carrera RS 2.7.

Since its introduction in 1966, the 911 S had proved itself to be a highly capable competition car, recording no less than six GT class wins at the Le Mans 24 Hours between 1966 and 1972—including a giant-killing 6th place overall in 1971. However, it became apparent that a new and significantly improved iteration of the 911 would be required for it to remain competitive against the likes of the Ferrari Daytona and De Tomaso Pantera in the years to come. Enter the Carrera RS 2.7, which was brand-new for 1973.

The new car would in effect use the 911 S as its basis, albeit significantly lightened and fitted with an enlarged, 2.7-litre version of the late-specification 2.4 litre 911 S engine; the new unit boasted a healthy 210 horsepower, as well as almost 20 per cent more torque than its predecessor. Thinner-gauge steel panels, a fibreglass engine cover, and minimal creature comforts reduced weight to 1,075 kilograms for the RS Touring model (and some 100 kilograms less for the rarefied RS Lightweight version), whilst aggressive new body styling—including discreetly flared rear wheel arches, a rear “ducktail” spoiler, and front air dam—completed the transformation.

Initially, Porsche intended to produce only 500 Carrera RS 2.7s to satisfy the FIA’s Group 4 Special GT homologation requirements. Such was the demand for the new RS that production soon surged past 1,000 units, thereby inadvertently achieving homologation for the less extreme—and hence more accessible—Group 3 Production GT category as well. However, it was the Group 4-specification, M491 variant of the RS, dubbed the 2.8 RSR, that stole the show, winning as it did the Daytona 24 Hours, Sebring 12 Hours, Targa Florio and International Cup for GT cars all in its inaugural year of competition.

As one of just 1,308 M472 Touring variants believed to have been constructed, this particular example was delivered to original dealer Hahn Porsche of Fellbach, located only a short distance from Porsche’s Stuttgart factory, on 1 April 1973. Specified in the classic RS colour combination of Grand Prix White with corresponding red lettering and black interior, chassis 0983 was generously optioned with leatherette and corduroy sports seats, driver and passenger seat headrests, fog lights, a retractable radio aerial, loudspeakers, and three-point safety belts.

After spending its early life in Germany, the car was exported to Japan in July 1979, where it would remain for the next three decades. During this time, its original engine was evidently removed and replaced with another period correct item; the former being placed in long term storage. In 2009, the car was discovered and purchased in Japan by noted Porsche authority, Manfred Freisinger, who repatriated it to Germany.

Freisinger promptly sold 0983 to contemporary GT and Le Mans team Roock Sportsysteme of Leverkusen, Germany, who carried out a full restoration of the car between 2010 and 2011; a Porsche factory certificate being issued on 28 October 2011. Fortuitously, the numbers-matching engine (as confirmed by this chassis’ 2.7 RS Registry entry) was located and purchased at auction in 2015 and, once also rebuilt by Roock Racing, was reinstalled in the car in 2016 prior to its sale to the incumbent owner in May 2017.

In the context of Porsche history, it is almost impossible to overstate the importance of the Carrera RS; it is a car which heralded the 911’s transition from plucky class-winner to Endurance Classic victor, while simultaneously offering genuine 150-mph performance from a Porsche for the first time. Consequently, the availability of such a fine example—immaculately restored by a Le Mans class-winning team, presented in its original factory colours and retaining its original engine and gearbox—represents an extremely rare opportunity indeed, and one which is surely worthy of further consideration by any committed Porsche or sports car enthusiast. 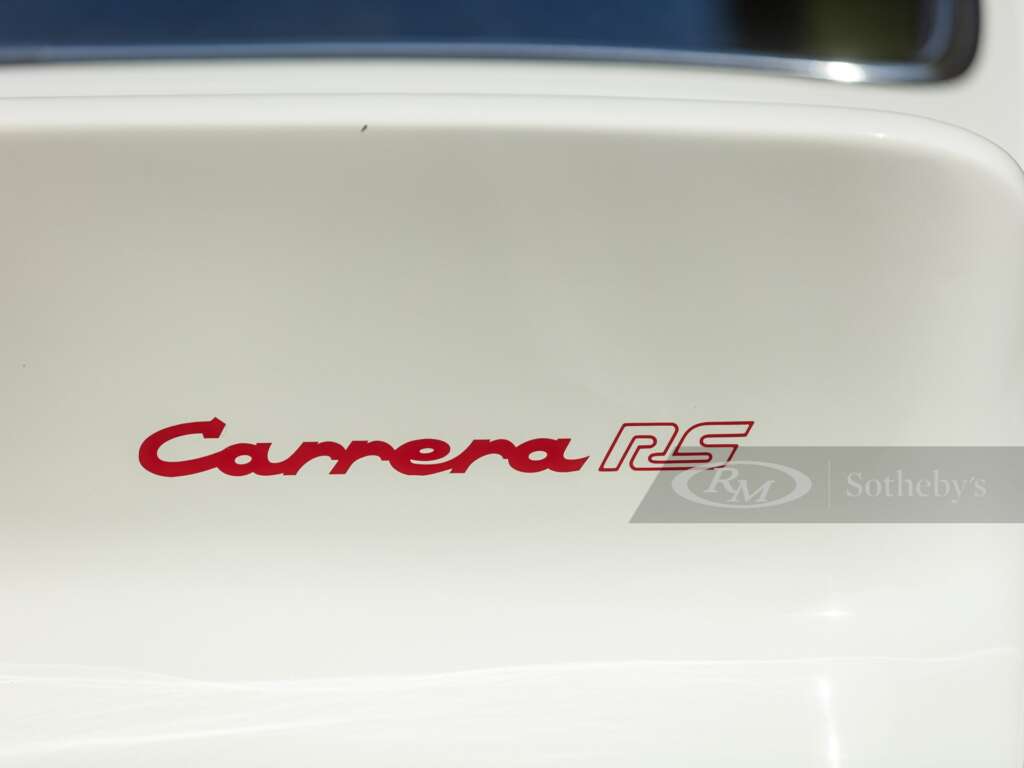