Paint-to-Sample Gulf Blue over brown leather interior with pepita inserts – Single ownership and just under 2,800 km from new – Fitted with the desirable single-mass flywheel and 90-litre petrol tank – One of only 41 delivered to Switzerland, delivered new through Porsche Centre Lausanne 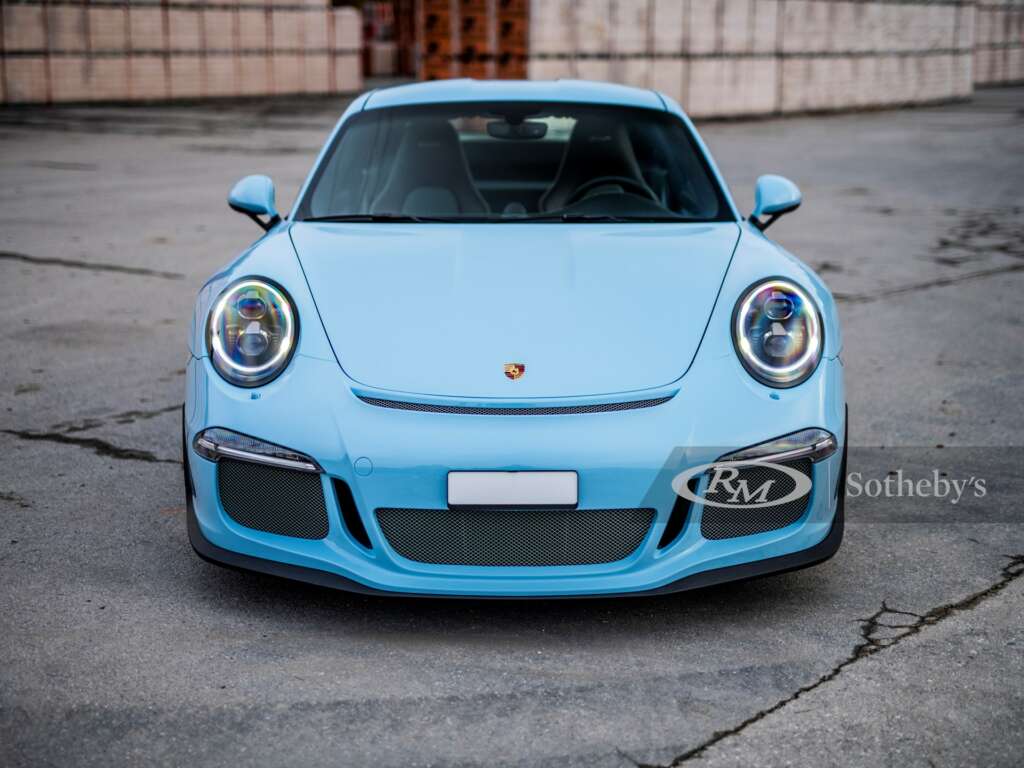 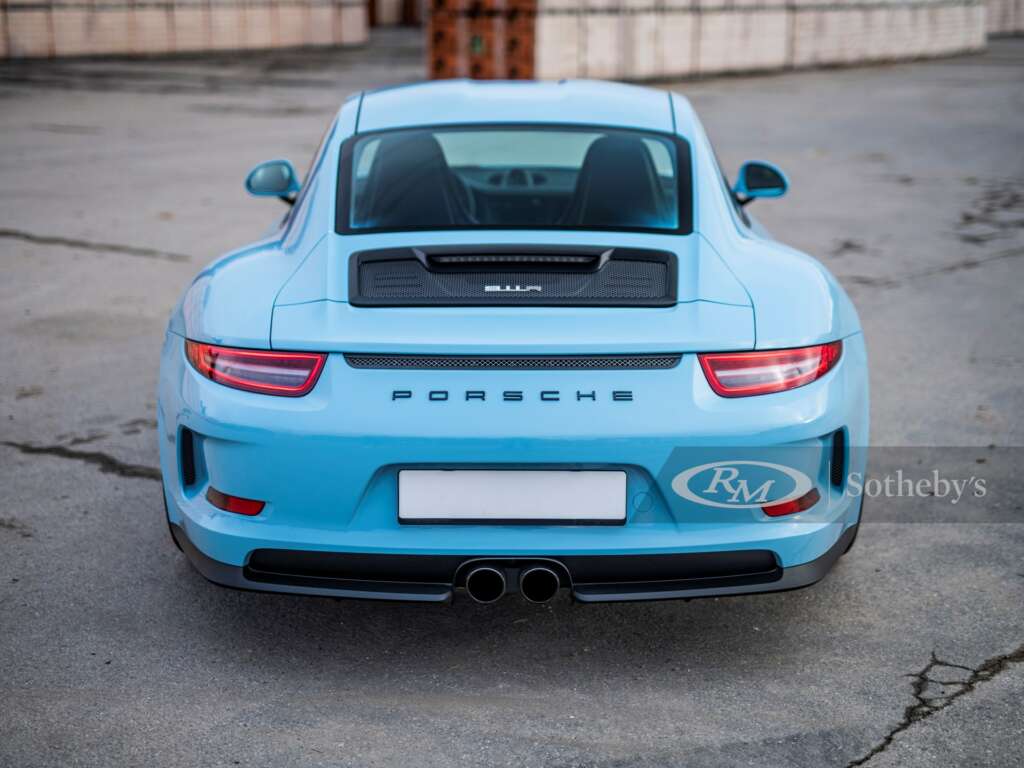 Please note that this lot will need to be collected from Romanel-sur-Lausanne, Switzerland.

The creation of Porsche’s 991-generation 911 R was a direct result of the introduction of another 991 model; the GT3 RS. The 997-generation 911 GT3 RS was one of the manufacturer’s most beloved creations, a lightweight, track-ready car that was also street legal. This was the ultimate driver’s 911 and the car which all modern 911 owners aspired to. Only offered with a six-speed manual gearbox, it held out against the ever increasing popularity of automated manual and semi-automatic gearboxes in modern supercars, including Porsche’s very well engineered Doppelkupplungsgetriebe gearbox.

With the 991 GT3 RS, Porsche essentially kept the same formula but in the name of performance, replaced the beloved manual gearbox with PDK, not even leaving a manual gearbox as an available option. Their was no denying the PDK’s superiority on the track, with lightening-quick shift times and smooth changes, but Porsche’s faithful made their displeasure of not having a manual transmission known.

Porsche heard its customers requests and in short order, released a limited edition 911 with the GT3 RS’ drivetrain, but fitted with a manual transmission, albeit with a slightly different ethos. Dubbed the 911 R, it was introduced at the 2016 Geneva Motor Show and while mechanically similar to the GT3 RS, the 911 R received numerous changes to its suspension and steering. Coupled with the six-speed manual gearbox, this 911 was not about the fastest possible lap time, but creating the most enjoyable driving experience possible.
While the vast majority of 911 Rs were painted white or silver with either red or green stripes, a handful of lucky owners requested Paint to Sample colors and were given the opportunity to further customize their cars through Porsche Exclusive. The first and only owner of this particular car, serial number 401, chose to go with Porsche’s most celebrated and popular Paint to Sample colours, Gulf Blue. The car was fitted with Porsche’s adaptive sport seats, trimmed in brown leather with pepita inserts, harkening back to the 911s of the late 1960s and early 1970s. Optional extras include the desirable single-mass flywheel, 90-litre petrol tank, Bose sound system, side skirts painted in the exterior colour, aluminium-look fuel filler cap, headlight washers painted in the exterior colour, additional dashboard trim in leather, and over 14,000 CHF in CXX custom tailoring options .
Since its delivery, the 911 R has been serviced just once by Porsche Centre Lausanne in January of 2019 at 2,677 and has been driven less than 200 km since. Designed to be the ultimate driver’s 911, the 911 R excels on the open road at speed, providing its fortunate driver and passenger with the performance one has come to expect from Porsche GT products, while retaining a playful soul and character, one that is inherently Porsche. Offered from its first and only owner, this 911 R is equipped with the most desirable options and with less than 2,800 km from new, it is ready to be enjoyed by its next owner. 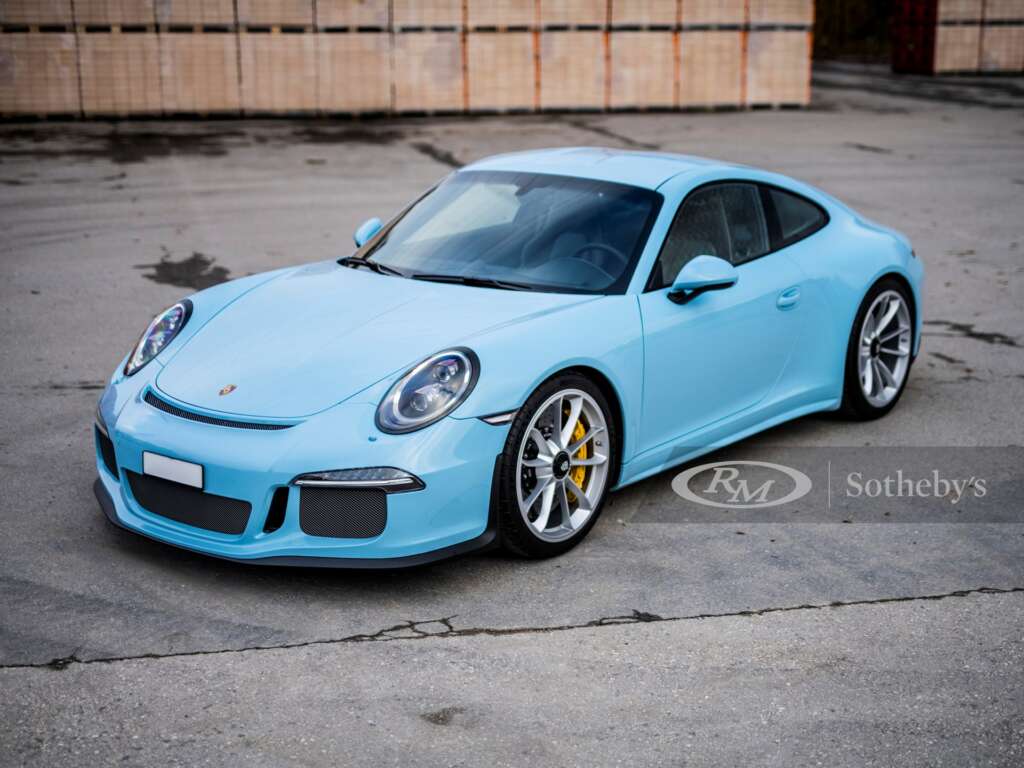 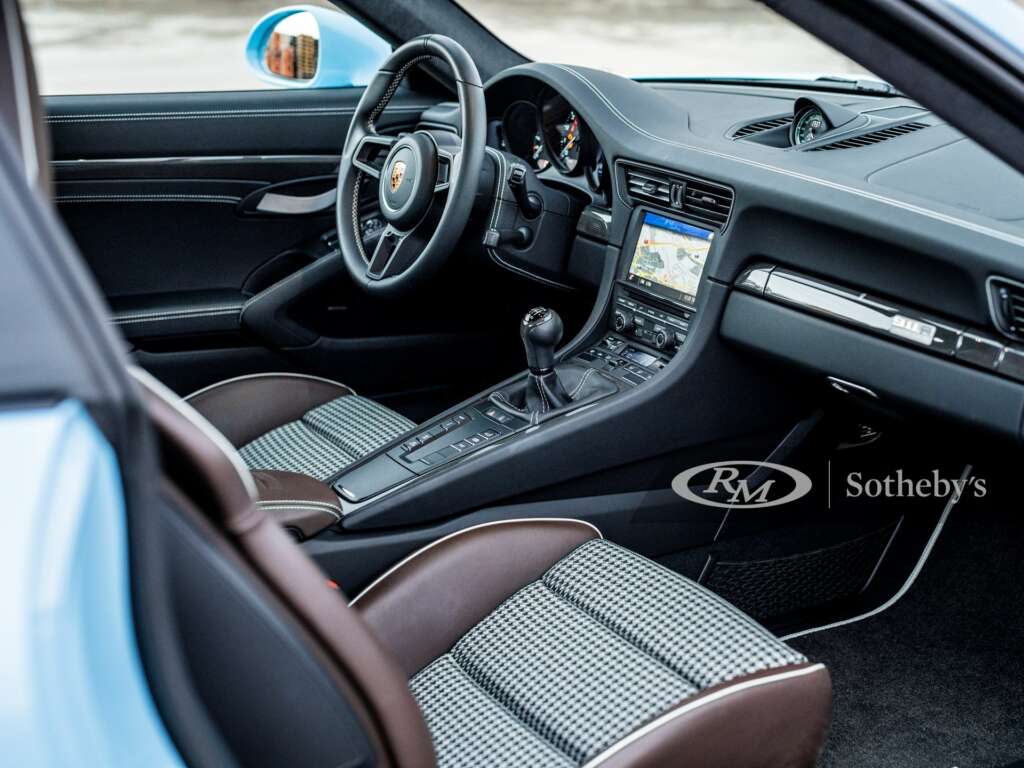