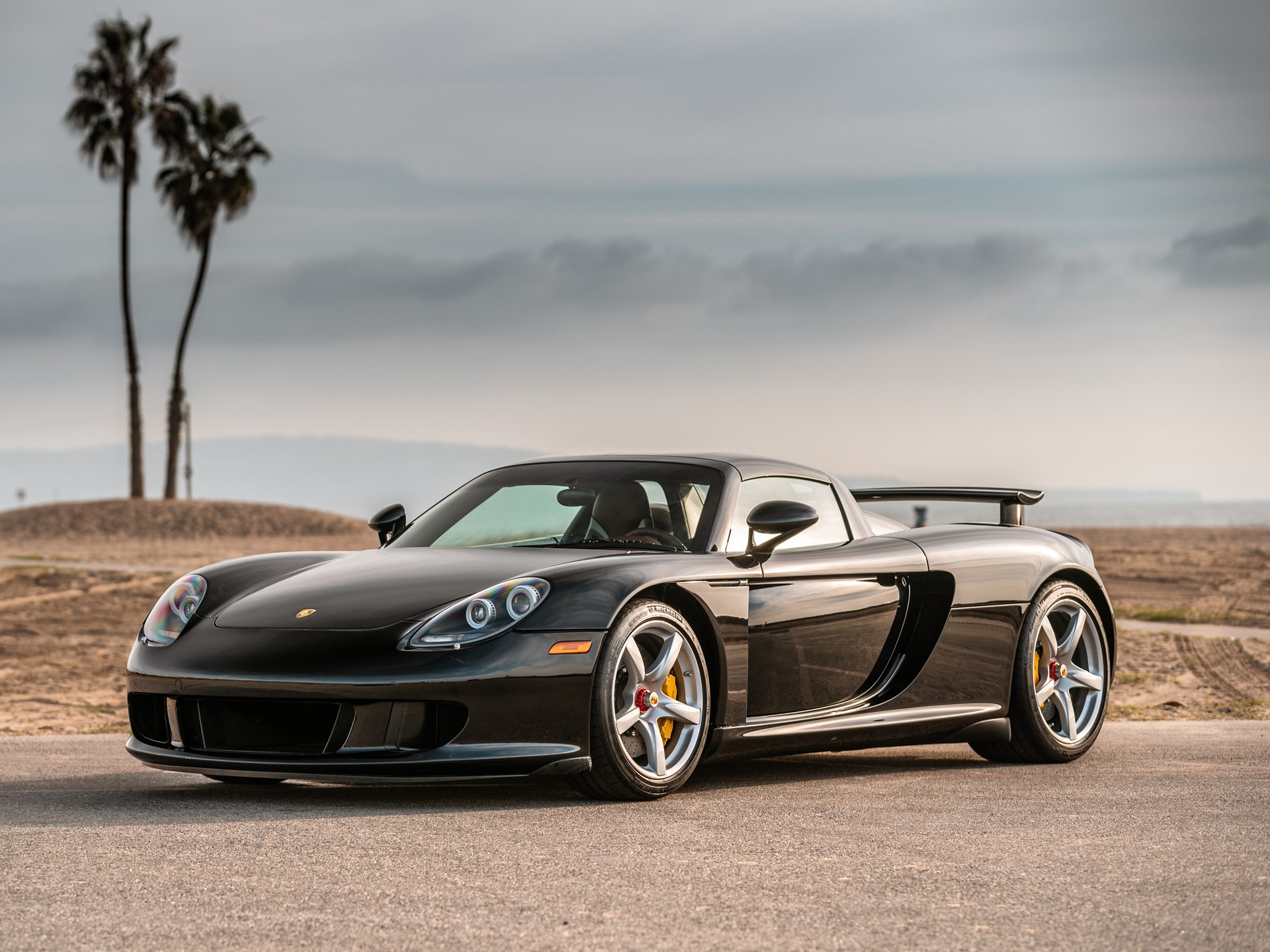 Porsche Carrera GT for sale in black at RM Sotheby’s!

This Carrera GT is one of only a reported 103 examples ordered in Black, a subtle color that suits the dramatic styling. The car was delivered in May 2005 to its first owner in Newport Beach, California, who owned it until 2011. During his tenure, the Carrera GT was driven 1,251 miles and was regularly serviced at Newport Auto Center. It was then acquired by a collector in Texas, who owned the car for several years before it briefly returned to California. In 2015 the Porsche was purchased by a noted connoisseur on the East Coast, where it joined his impressive sports-car collection. Danbury Porsche has since handled the service work, with its most recent service being completed in August 2019. They also performed a full mechanical inspection and found the car to be free of any leaks. The clutch was also measured, which read well within the normal wear limit. An engine-out service to replace the real main seal was completed in 2014, and service receipts dating back to 2013 are on file. New Michelin Pilot Super Sport tires have recently been fitted, a marked improvement over the original tires for the Carrera GT. Since production ended nearly 15 years ago, the Carrera GT has become increasingly recognized for its ideal combination of performance and an involved driver experience. With approximately 1,750 miles today, this Carrera GT is an excellent example and is ready for its next owner to drive and enjoy. Included with the car is a partial luggage set, owner’s manuals in their Carrera GT leather folio, and service records.

The Carrera GT saga starts five years before the first production model left Porsche’s facilities in Leipzig, Germany. Porsche sought to develop a new Le Mans prototype to replace the venerable GT1, which was powered by a 5.5-liter V-10 engine. However, a change in FIA rules quickly shelved their racing plans while the model was in development. Porsche remained undeterred and continued forward with plans to make the platform suitable for road use. To attract attention to their stand at the Paris Motor Show in 2000, Porsche displayed a road-going concept alongside their other production models. With the amount of attention that the concept received, combined with additional revenue from the Cayenne, Porsche decided to go ahead and produce the car. The Carrera GT was first offered for sale in 2004, along with such competitors as the Ferrari Enzo, Ford GT, and Mercedes-Benz SLR McLaren. The Carrera GT more than held its own in what proved to be an incredible year for supercars.

The materials that went into the construction of the Carrera GT were those of an engineer’s dream. By utilizing a carbon-fiber monocoque and subframe as well as carbon-ceramic brakes, Porsche’s engineers pushed the envelope of what was mechanically possible in order to offer a car that was as light as it was strong. Porsche also designed a three-disc carbon-fiber racing clutch for the car, which measured 7.5 inches in diameter and was about one-third the size of a normal clutch. Similar attention to detail was applied to nearly every facet of the car. The ultra-lightweight forged magnesium wheels had center-locking bolts that were color-coded for each side, ensuring that bolts were never put on the wrong side of the car.

At the heart of the Carrera GT beats a fiery 5.7-liter V-10 engine. Performance was incredible, with 605 horsepower and 435 foot-pounds of torque, and the Carrera GT could rocket from 0–60 mph in 3.6 seconds toward a top speed of 205 mph. The Carrera GT truly showed its racing roots when, in July 2004, one piloted by Walter Röhrl lapped the Nürburgring Nordschleife in 7:28. It was a record for Porsche that was not broken until the release of their own 911 GT2 RS in 2010.

Slide into the Carrera GT’s carbon-fiber bucket seats, and every surface within reach is either leather, aluminum, or carbon fiber. Nothing in the car, less the requisite stereo with CD player, and the air-conditioning, distracts the driver from the task at hand. Everything else in the cockpit is typical Porsche, from the instrument layout with the tachometer in the center to the left-hand placement of the ignition. Porsche topped the gear shifter, which was mated to a six-speed manual transmission, with a retro-inspired wooden shift knob, tying an organic link from past models into their technological tour de force. By the time production ended, only 1,270 examples had been built. 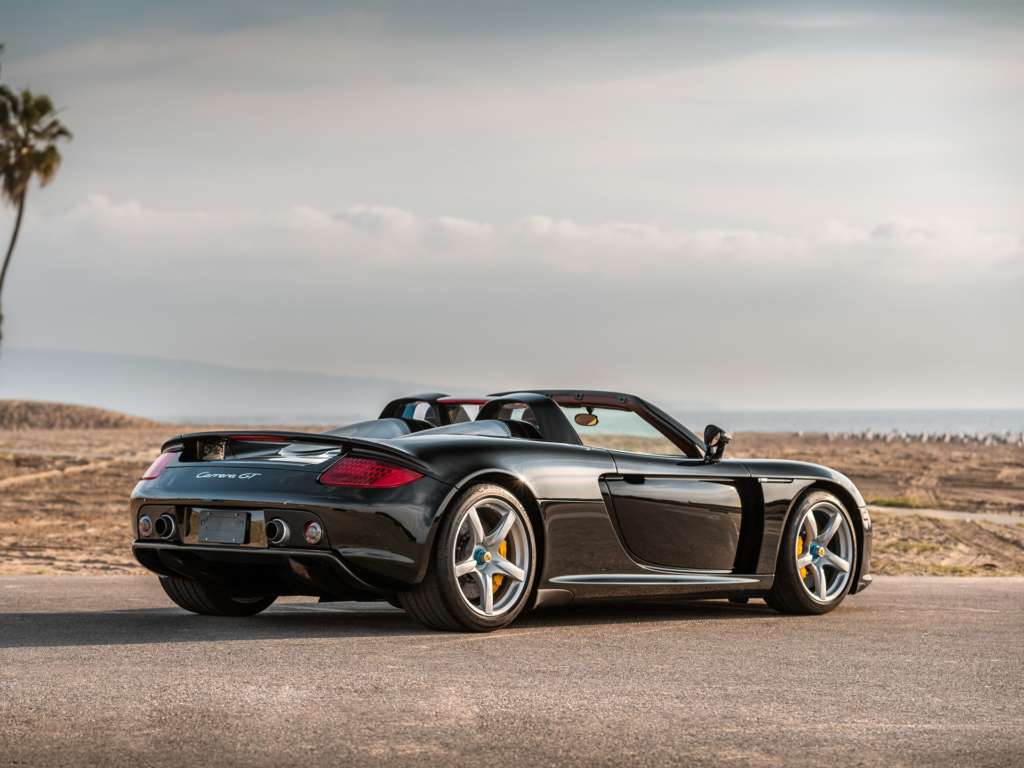 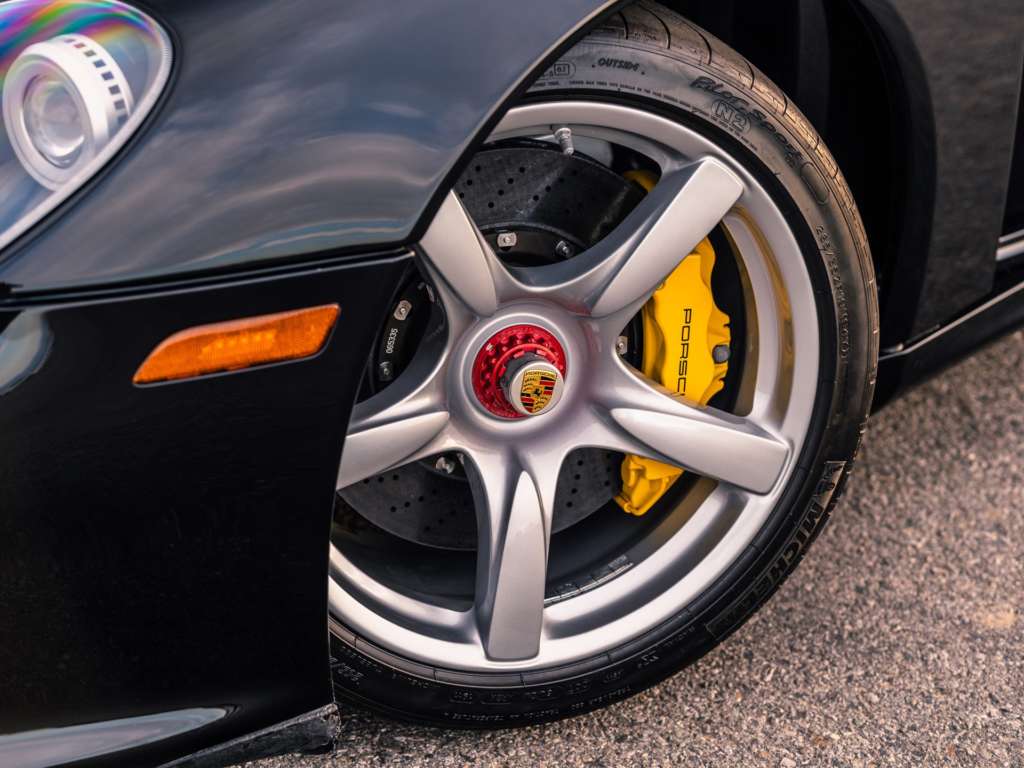 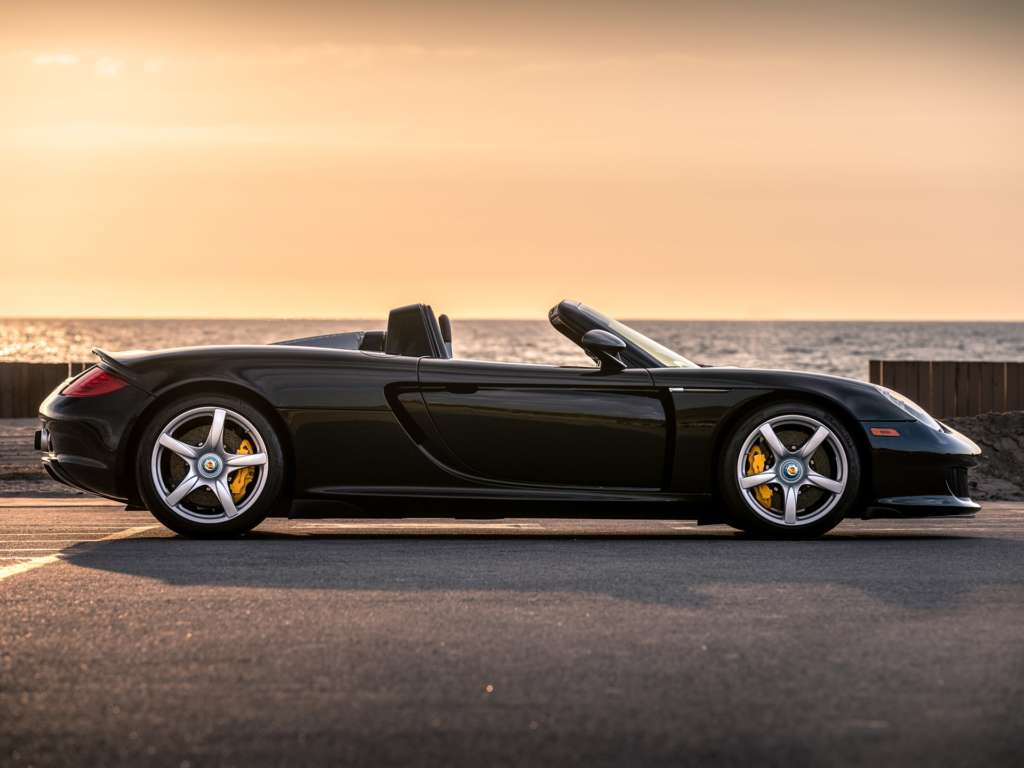 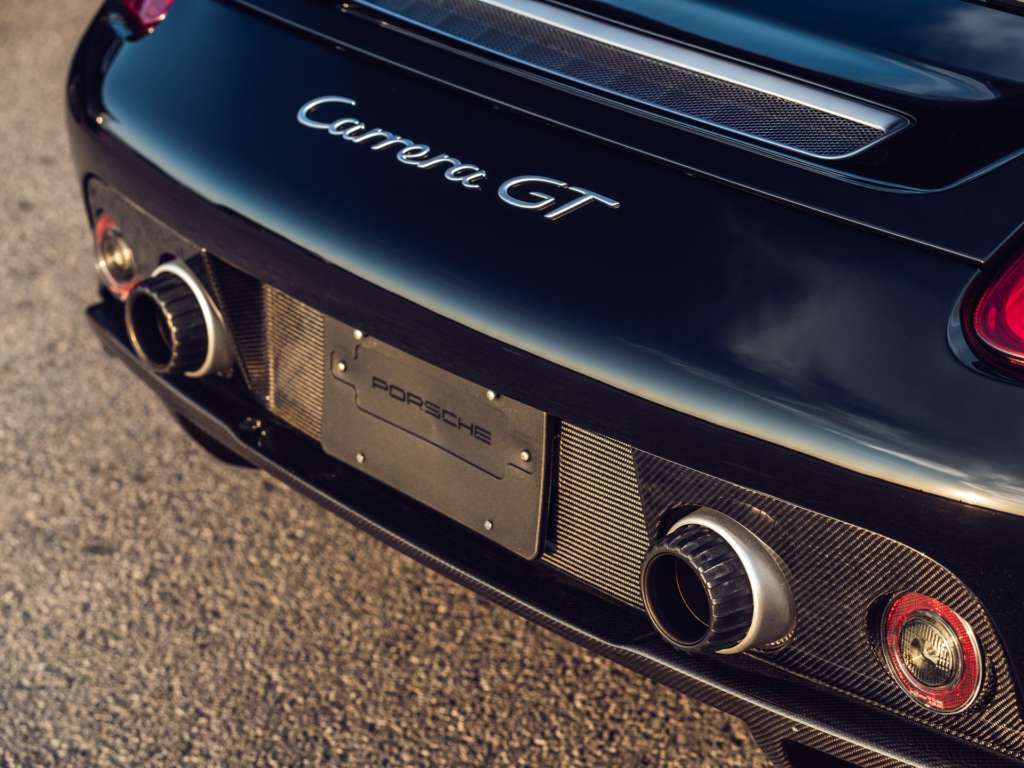 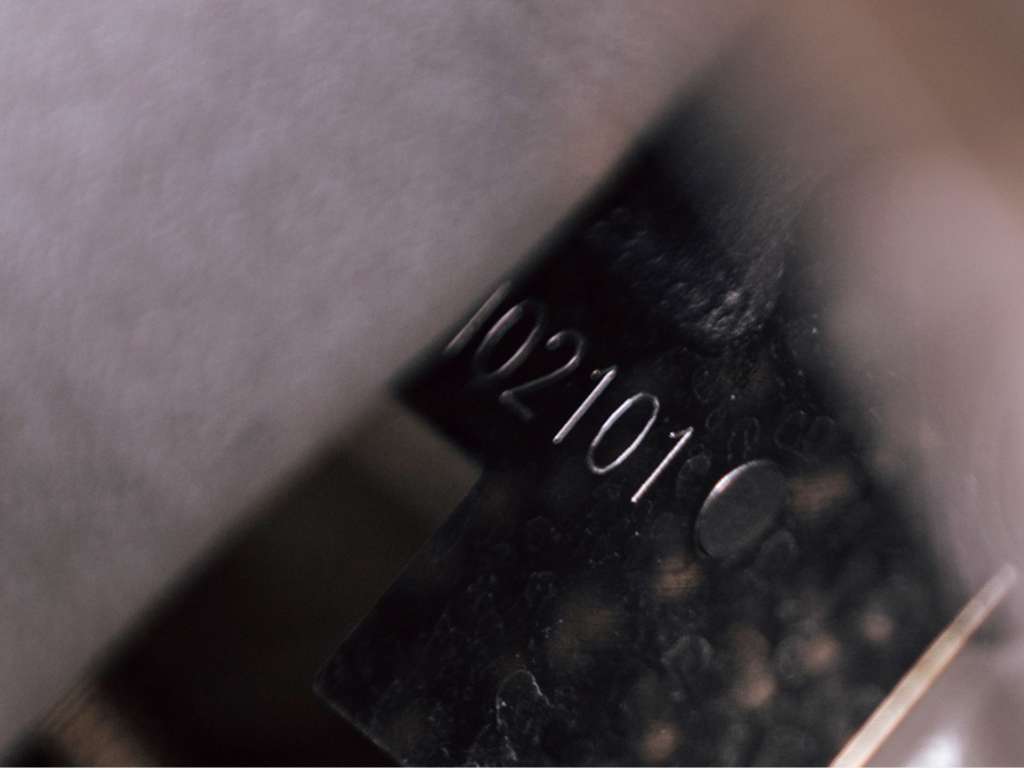