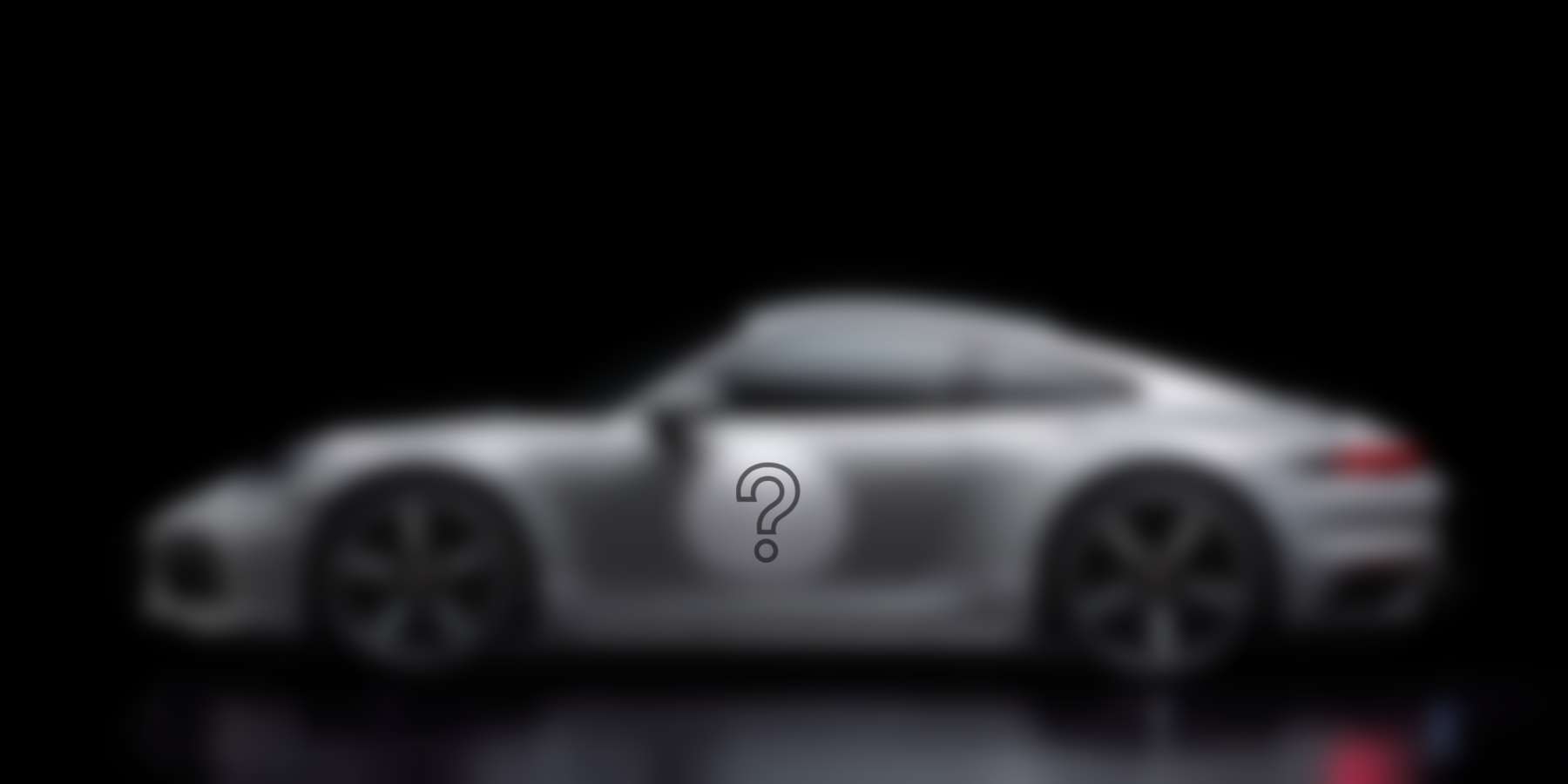 Porsche is one of the most tradition-conscious car manufacturers of all. Time and again there are special models for special occasions and anniversaries. With the 911’s 60th birthday around the corner, we’ve asked ourselves: Will there be a Porsche 911 60th Anniversary Edition celebrating 60 years of 911? A 911 to continue the heritage of the 25, 30, 40 and 50 years of 911 Anniversary editions? At any rate, one can strongly assume so. We therefore look back at the four Porsche “Jubi” models: Afterwards, we open up discussions with three possible scenarios.

The first so-called Jubi, the Porsche 911 Carrera 3.2 “25 Years 911” entered the scene in the summer of 1988. In essence, they were very well equipped Carreras with the option code M097 for Germany, M098 for the USA and M099 for the rest of the world including Switzerland.

Just 870 units were built – exclusively for the 1989 model year. Of these, 180 were for the German market, 500 for the USA and 190 for the rest of the world. In total, the models were available in four colors, depending on the market. German cars were always dark blue metallic, RdW navy blue metallic, for the United States there were 60 in black metallic and 160 convertibles in silver metallic. The remaining vehicles were also dark blue metallic.

The development department’s plans for the Porsche 911 Anniversary Edition to celebrate 30 years of 911 were ambitious. According to reports, in addition to the wide body and all-wheel drive, original plans also included a performance upgrade, turbo chassis and turbo brakes. But this was not to happen. Porsche’s economic situation ultimately did not permit these costly individualizations.

What remained of the first Porsche 911 “Jubi,” as they have since been affectionately called, were only a few details. The equipment code M096 ultimately concealed “only” a Carrera 4 in a wide body with some interior details. Only technically necessary solutions for the track widening were borrowed from the Turbo. The engine itself remained untouched. Visually, the Jubi was recognizable by its limitation badge on the rear parcel shelf, woven-in 911 lettering on the back of the rear seats, the leather driver’s airbag and the titanium-plaque on the shifter.

Initially, the Porsche 964 30th Anniversary was only available in Viola Metallic paint with a Rubicon Gray interior. There are traces that the color range was only expanded at the request of Porsche Centers. As shortly after its presentation, Porsche also offered the 964 Jubi in Polar Silver Metallic and Amethyst Perlcolor. Today, the Porsche 911 30th Anniversary Model enjoys great popularity among collectors, even though sales when new have been rather sluggish. On the 911’s fourth anniversary, Porsche was once again in safe economic waters. That’s why the engineers were given a little more leeway with the second Porsche 911 anniversary model, the “40 Years of 911” or “40th Anniversary Edition”, based on the 996. Unlike its predecessor, it was based on the narrow-bodied Carrera.

At front, the Porsche 996 40th Anniversary Edition received the front of the Turbo – a unique feature for narrow body 911s. Porsche offered GT Silver as the only exterior color, which had been reserved for the Porsche Carrera GT to this point. As another unique selling point, it received polished 18-inch 5-spoke rims. The special equipment left nothing to be desired, either inside or out: Among other things, a power increase to 345 hp, limited-slip differential, sports suspension, sports seats with painted backs, sound package, Litronic headlights, interior accents painted in exterior color and the obligatory badge were common to all 996 Jubis.

A total of 1,963 examples produced were sold – for a hefty premium of almost 40,000 euros/USD over the regular Carrera 4. Among the limited-edition Porsche models, they are still among the most affordable, though. If you’re quick, you can still secure great cars in the mid five-figure price segment here. Insider tip! 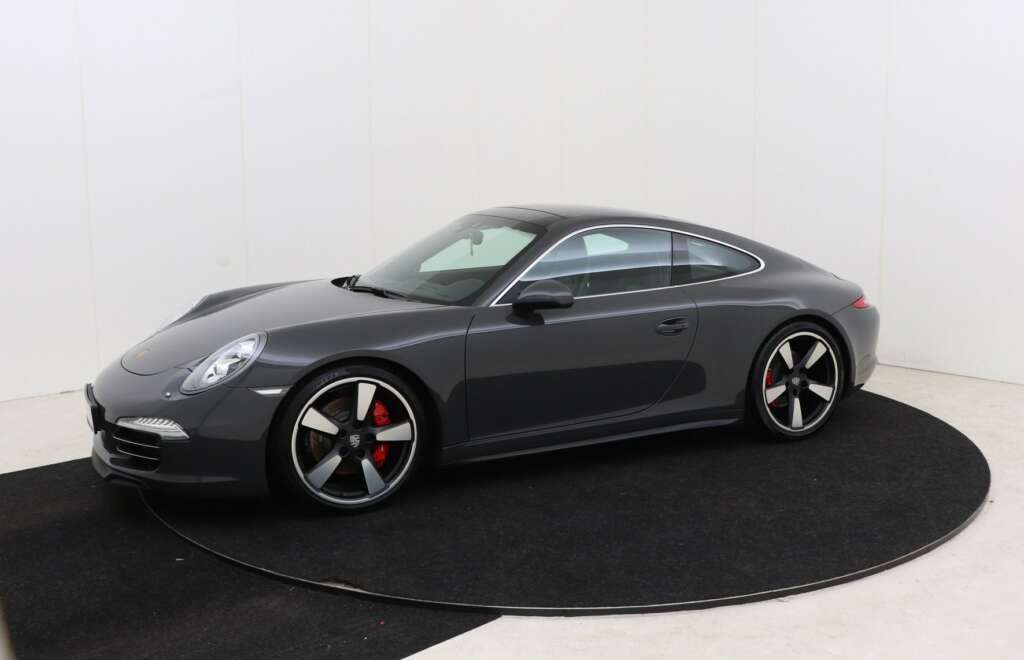 In 2013, the Stuttgart-based company once again launched an anniversary model, this time based on the Porsche 991. The wide all-wheel-drive body of the seventh 911 generation was used as a baseline for the third anniversary model. The 400 hp 3.8-liter boxer engine from the Carrera S was used in the rear. Technical refinements such as Porsche Active Suspension Management (PASM) and the sports exhaust system were just as standard as the chic rims in classic Fuchs design. Customers could choose between a 7-speed manual transmission and 7-speed PDK.

Once again limited to 1,963 units, the special model was officially called the Porsche 911 Carrera S 50th Anniversary Edition. Externally, it can be identified by the 911-50 badge at the rear. The color selection at the time was limited to the two special colors Graphite Gray, Geyser Gray metallic and Black uni. Today, the 50th anniversary 911 special models are in great demand on the used market. The price range extends to over 200,000 euros for as-new examples.

Ten years later, the question arises as to whether Porsche will launch a 911 60th Anniversary Edition for 60 years of 911. So far, there have been no leads on this. On the other hand, it has been rumored for some time that the Porsche 992 will receive a facelift next year. We therefore think three scenarios are possible.

The first option would be that there simply won’t be a limited car for 60 years of 911. After all, Porsche has already presented two limited-edition 911s in 2022, the 992 Sport Classic and the 911 Dakar. Of course, both sold out immediately, but they also have to be produced first. This is certainly no easy task due to the still somewhat patchy supply chains. However, in view of the commercial success of the latest limited special models, it would also be possible to push this strategy.

That’s why we see the second option being an anniversary model based on the outgoing 992 Carrera S. Either as a stand-alone model, or as part of the Heritage range. Thus, a Porsche 911 60th Anniversary Edition would be the third of four announced Heritage models. In addition to the 911 Sport Classic mentioned above, there is already the 911 Targa 4S Heritage Design Edition. In both cases, the 992 Carrera S would presumably be the base car for a Porsche 911 60th Anniversary Edition/60 Years of 911 or whatever it might be called. Then, an iteration of the 450-hp 3.0-liter biturbo six-cylinder boxer engine would be set.

A Porsche 911 60th Anniversary Edition “60 years of 911”, based on a facelifted 992 Carrera seems unlikely, but would be extremely exciting

Option three would be a Porsche 911 60th Anniversary Edition/”60 Years of 911″ based on the Porsche 992.2 Carrera. However, assuming a presentation of the 992 facelift might be held in fall of 2023 for the 2024 model year, that would be very unlikely. There are usually no special models this early in the model cycle.

However, this scenario would probably be the most exciting with regard to the possible engine for the refreshed 992. Rumors about Porsche using an offshoot of the 4.0-liter naturally aspirated engine, known from the 718 GT4 and GTS 4.0, persist. Thus, a fourth Anniversary Edition or “Jubi” – like its predecessors – could come along without forced induction. Music to the ears of purists.

And assuming there is no Porsche 911 60th Anniversary Edition to celebrate 60 years of 911, what will Porsche do instead? Of course, technically speaking, the 911 has only been around since 1964 – before that it was called the 901 and had not even been delivered to customers. But it would be very surprising if Porsche were to refer to the start of series production instead of the IAA presentation for the anniversary in the future. In any case, we would be extremely surprised if Porsche were to simply let the next anniversary of its flagship car pass by. 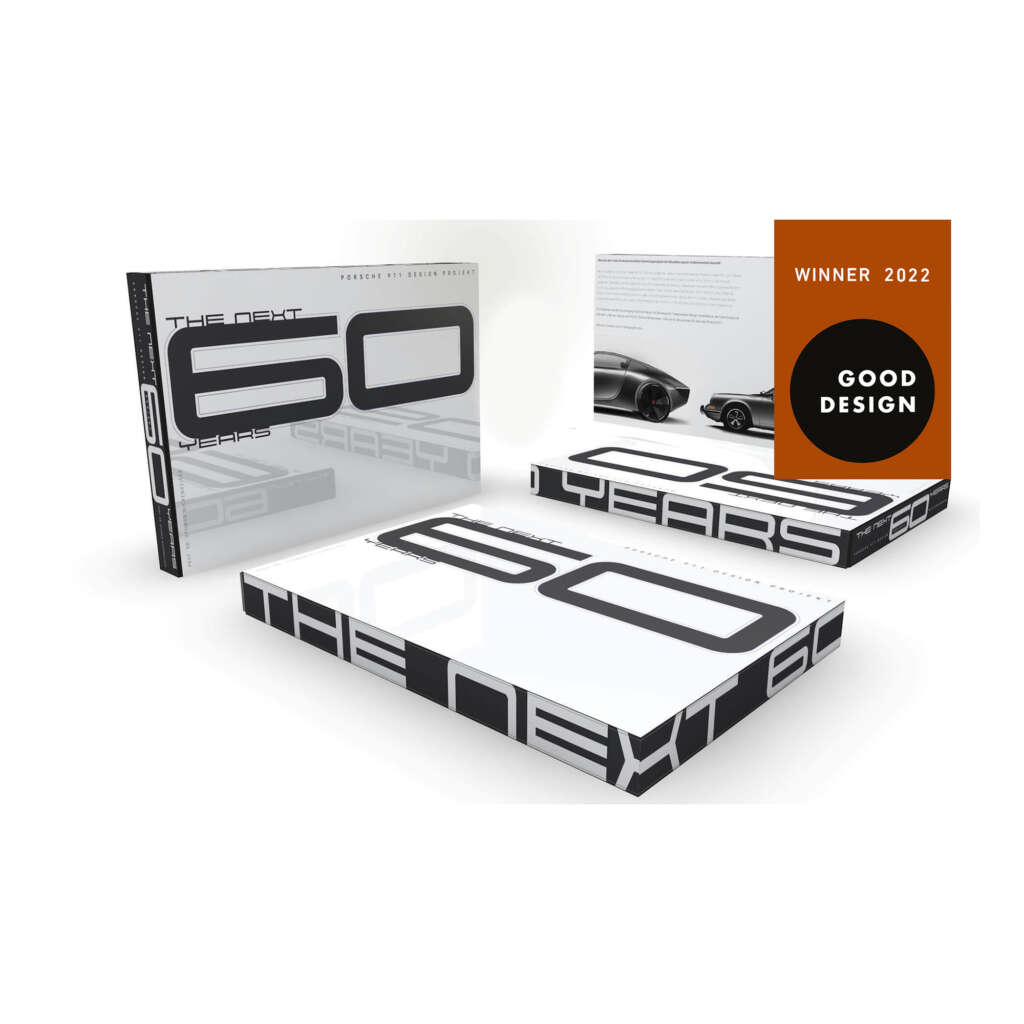 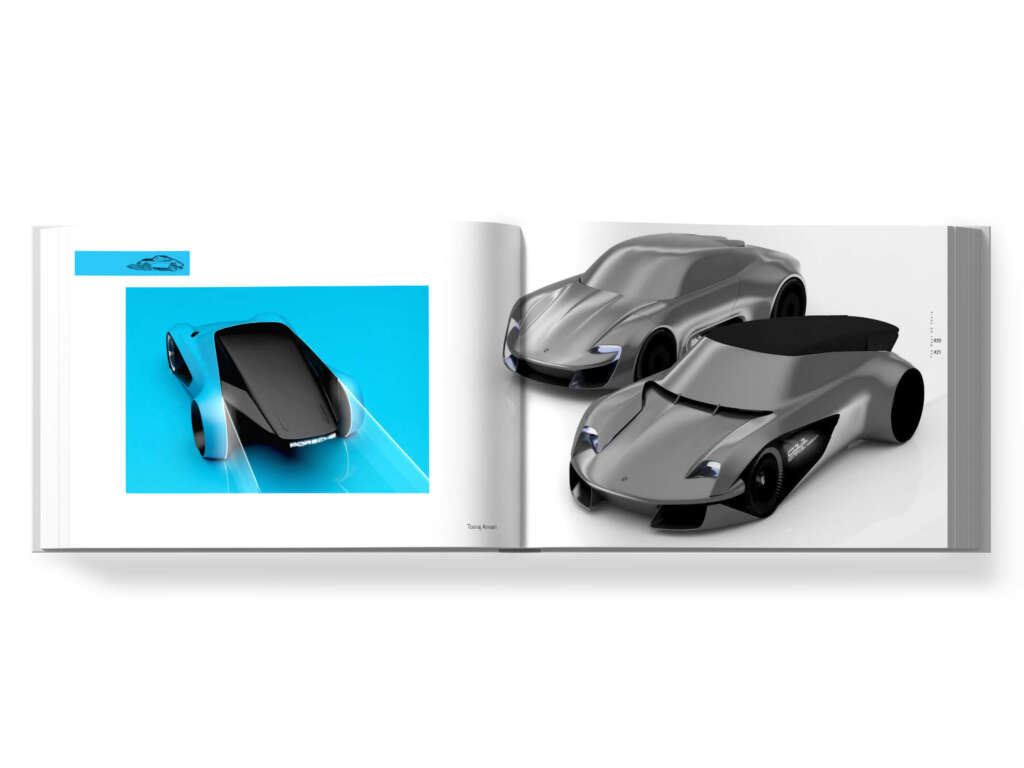 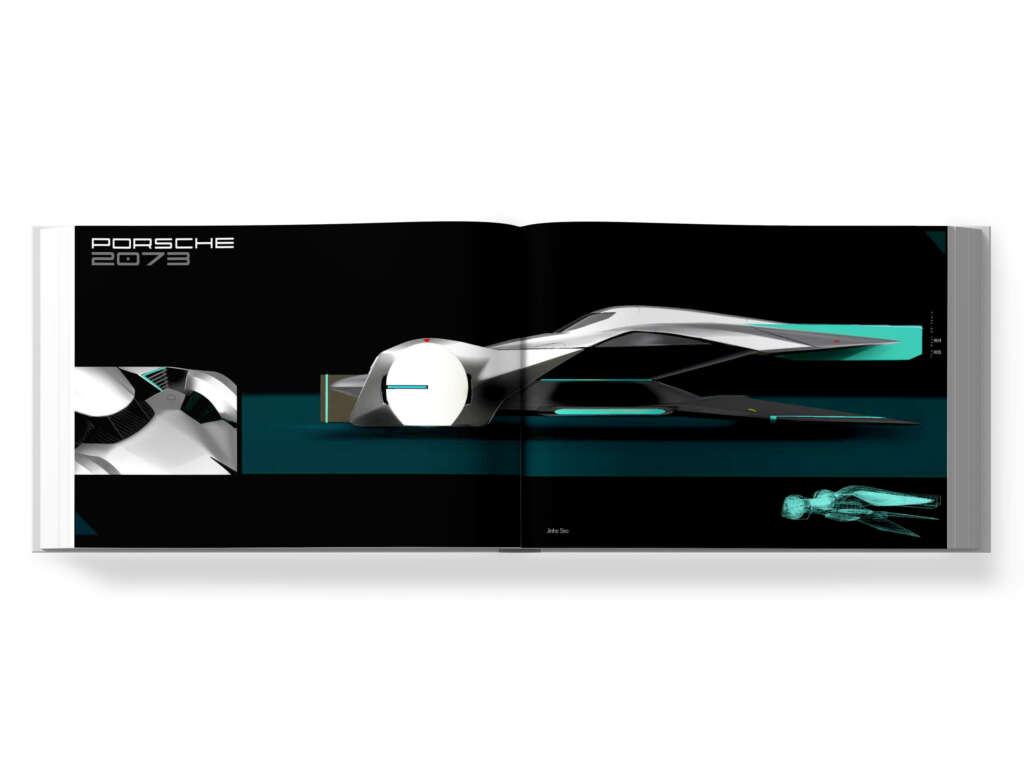 The Next 60 Years Porsche 911 Design Projekt