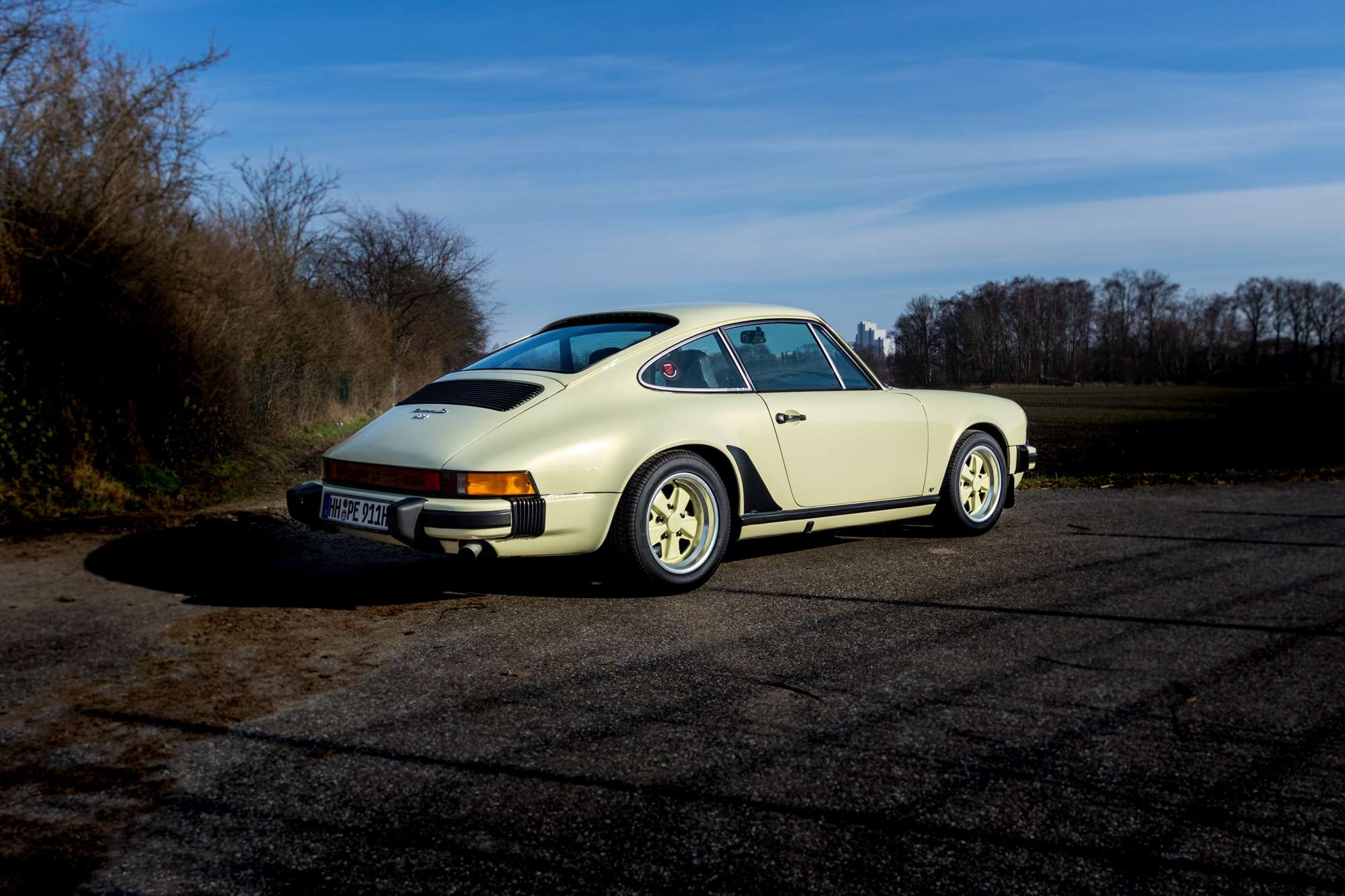 Yes, it happens again and again. But rather rarely. Now and then one gets the opportunity to report on a very special vehicle. With us enthusiasts, almost every Porsche sports car triggers enthusiasm, but sometimes the basic enthusiasm turns into veritable fascination. This Carrera 3.0 is fascinating. Not only is its look unique, it also has a special story to tell. And, best of all: one can even buy this car these days!

One of two color test cars

This somewhat bumpy word describes the first chapter in the special history of this Porsche. According to its “birth certificate”, the Carrera 3.0 was delivered as an in-plant vehicle (internal purposes) in the year 1977 (model year 1976). One of a total of two color test cars with the special ‘mother-of-pearl ivory’ color, which was not reproducible at the time. It was an Iridion paint. Paint trials with this type of paint were soon discontinued, because they faded very quickly and therefore were not useful for the series. The car was then painted by the Porsche factory in a mother-of-pearl color (code 947). As part of a complete restoration in 2005, the original formulation of the test color was determined with great effort. The entire car was searched for remains of the original color. These were then found under the rubber pads of the rear bumper. This exact color was then reproduced by the painters. 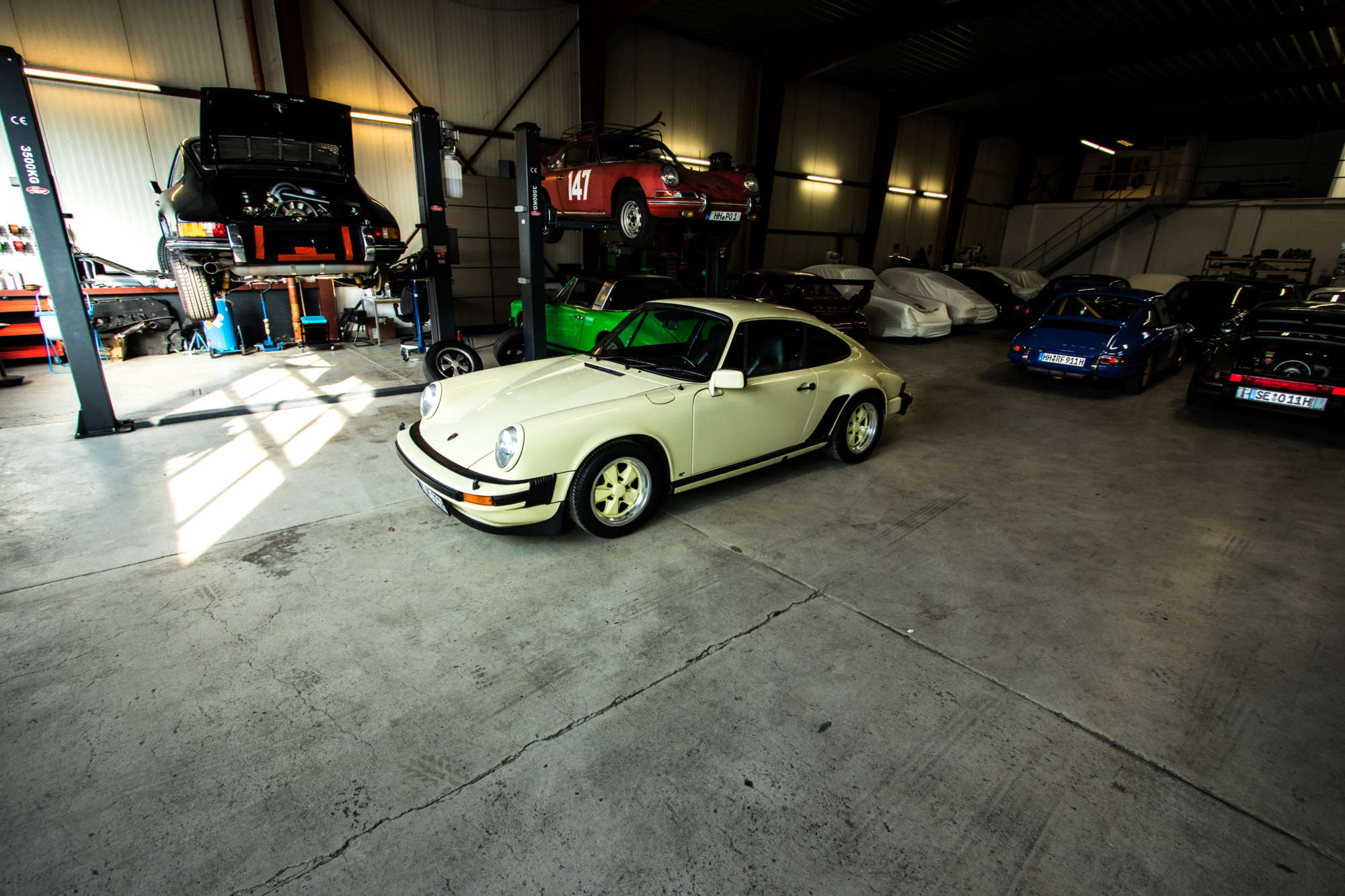 Through his good contacts at Porsche, the then Formula 1 racing driver Jochen Mass became aware of this very special color test car. He liked the color so much that Porsche provided the Carrera 3.0 to him as a company car. The fact that this car is a Porsche special vehicle, is also confirmed by the fact that many interior parts were provided with the production number. At that time, this only happened to VIP and Porsche family vehicles. Jochen Mass used the Carrera for, among other things, the journey to various races. On his way to the Formula 1 Grand Prix at Barcelona Mass suddenly had to dodge a truck on the highway. Fortunately, this maneuver only resulted in minor damage to the sheet metal, which was then repaired at the Porsche factory. A front fender had to be exchanged. In the course of this, the car was painted with the then serial color “mother-of-pearl” (code 947), as mentioned above. Jochen Mass – Racer with a Porsche past 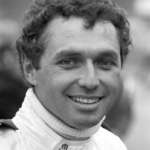 The German Jochen Mass (71) is a living racing driver legend. The emphasis is on legend as well as on living, because in the seventies, the highest racing class in the world was far from the perfectly organized association that it is today.   So Jochen Mass drove at a time when it was very dangerous for racers, at a time when Formula 1 unfortunately claimed several lives every year. He made his debut in 1973 and drove a total of 105 races in this class. On April 27, 1975,Jochen Mass was victorious at the Spanish Grand Prix on the extremely dangerous street circuit of Montjuïc in Barcelona. In the 1980s, Mass drove sports cars from Porsche and Sauber-Mercedes. In 1985 he started one of the three Porsche 959s at the Dakar Rally for the Porsche factory team. Another peak in his career was in 1989. Together with Manuel Reuter and Stanley Dickens, Jochen Mass won the legendary Le Mans 24-hour race in a Sauber-Mercedes.

The Carrera 3.0 – turbo engine without turbo

Turbo engine without turbo? Sounds strange, but it was actually true. In 1976 and 1977, customers were offered a new Porsche 911 Carrera. Not with the legendary 2.7 engine of the Carrera RS, however, but with the Turbo (930) 3-liter engine, newly developed for the 911, but without turbocharger. To the trade press, the new Carrera was then only a glorified 2.7 RS. An assessment that did not do it justice. Although the performance data were nearly equal, the way the Carrera 3.0 performed was unique. To compensate for the missing turbo boost of the 930, Porsche increased the compression ratio and this proudly provided the three-liter Carrera with 200 hp and a torque of 255 Nm on the road. Due to the strict emissions regulations in the US, the Carrera 3.0 was built only for the European market. This had a corresponding effect on the number produced. Only 2546 Carrera 3.0 Coupes were produced. 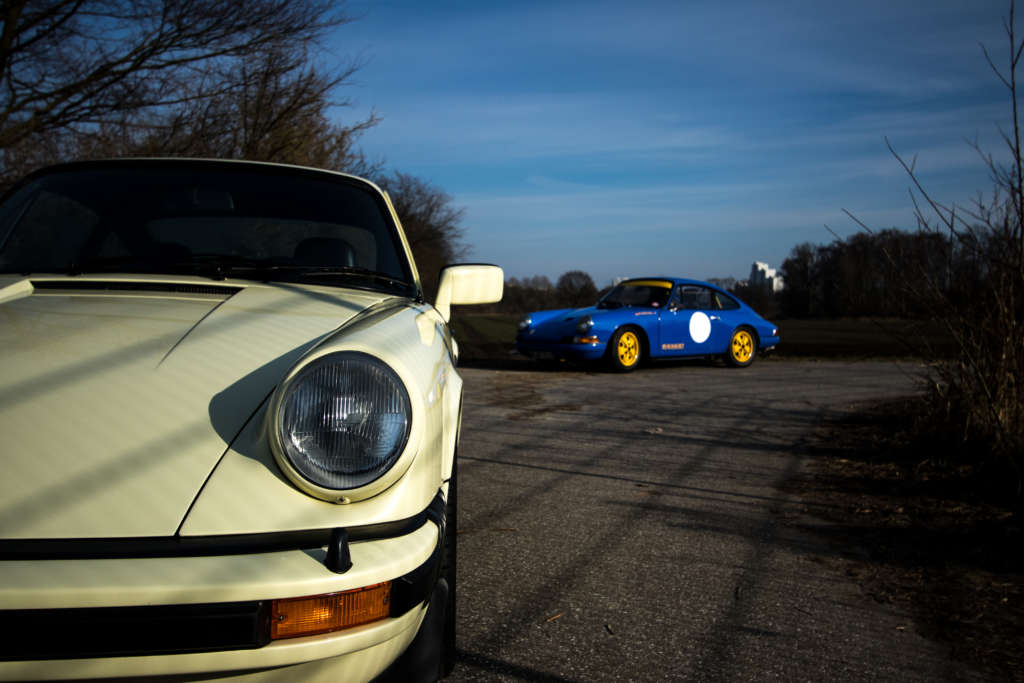 “Carrera – this name is reminiscent of the longest and hardest road race in the world, in which Hans Herrmann, Prince Metternich and José Herrarte once celebrated Porsche triumphs: The Carrera Panamericana.”

These are the words with which the text of the official Carrera 3.0 sales brochure of the time began. And today everyone associates the word “Carrera” with Porsche. As shown by invoices and an entry in the service booklet, the engine was completely rebuilt in 1989 by the world-renowned company RUF from Pfaffenhausen and its output was optimized to 217 hp by means of the SCR Kit. Therefore, this Carrera received one of only 200 factory conversions ever done by RUF. With this optimization, the performance was improved to above the level of its successor, the Carrera 3.2. RUF noted the specifications for the engine on the data sheet of January 1, 1981 as follows (in brackets series engine 3.2): bore 98mm (95mm), stroke 70.4mm (74.4mm), engine capacity 3185cm3  (3164cm3 ), compression 9, 8: 1 (10.3: 1), 160kw / 217HP, 280Nm at 4100. The engine conversion kit is still available today like some other parts.

Mother-of-pearl – the most sought-after color of nature

Iridescent in all rainbow colors and incredibly robust: small marine animals produce the raw material mother of pearl, which fascinates designers and technologists alike. Due to its special surface structure, which creates a matte, iridescent sheen when exposed to light, it is used in the production of art objects such as jewelry and decorative buttons. 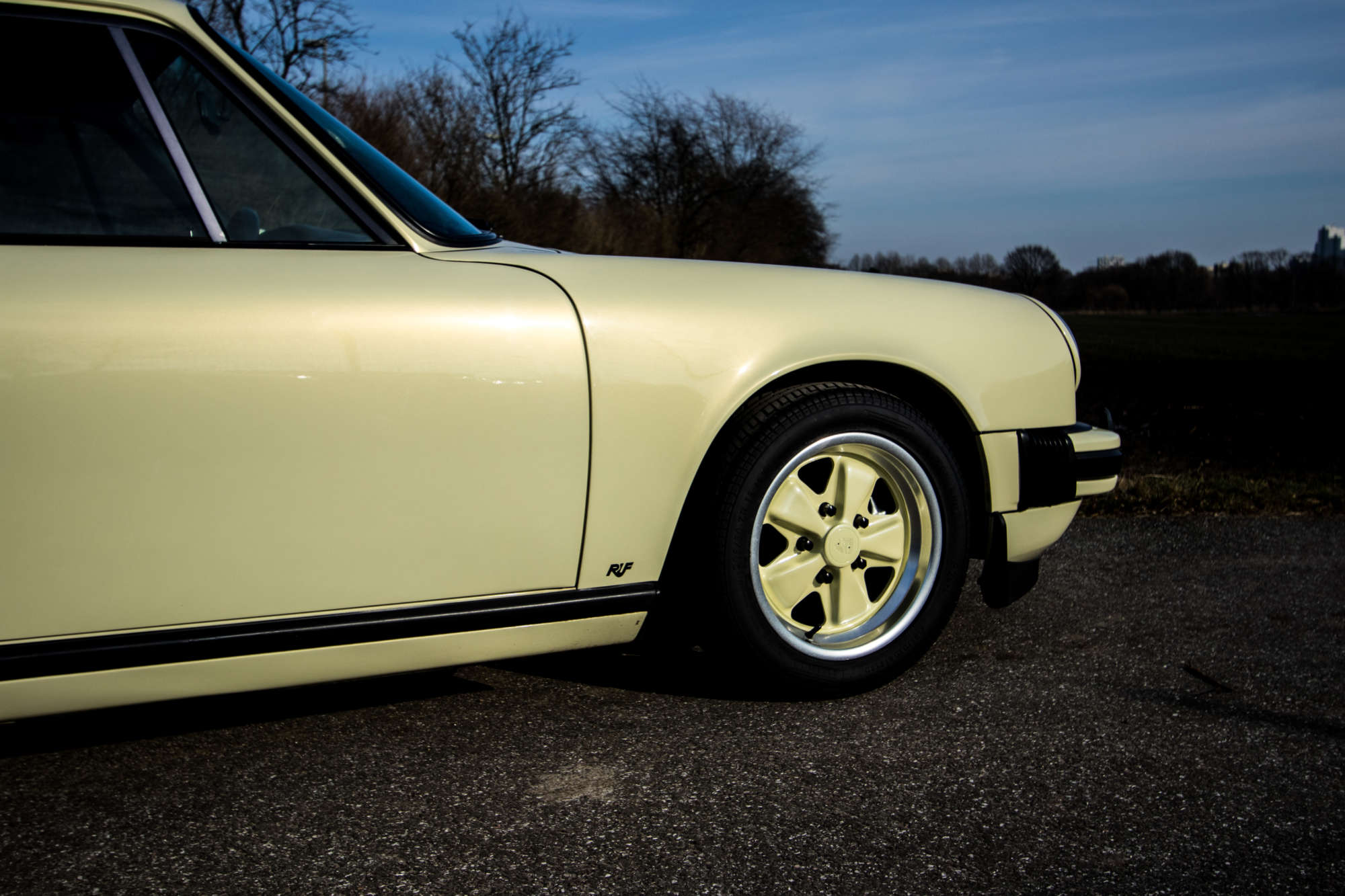 The interior radiates the charm of the late seventies and its originality is exciting. Everything seems untouched; even the floor mats are still as delivered. The black leather shines and has charming patina. All as it should be for a car with a story like this one. Of the 2546 Carrera 3.0 coupes ever built, this is probably the most special one. Color, history, previous owners and the performance of this dream car make it simply unique. This Carrera is not a garage queen. This 911 belongs on the streets of this world. A great opportunity, not just for collectors, but for all enthusiasts who really want to experience this particular automobile. In any case, the future owner can look forward to the fact that the mother of pearl color of his Carreras always appears different depending on the light. One of many features of this dream car. Click here for the >> listing. 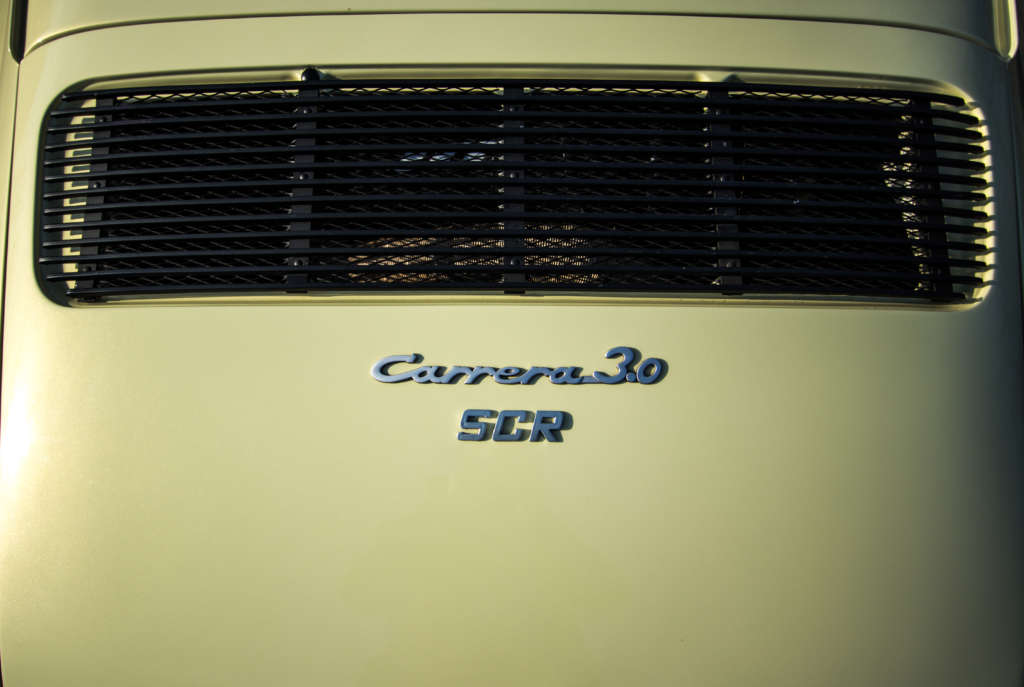 Thanks to Matthias Höinig for the opportunity to do the photo shoot in his workshop. 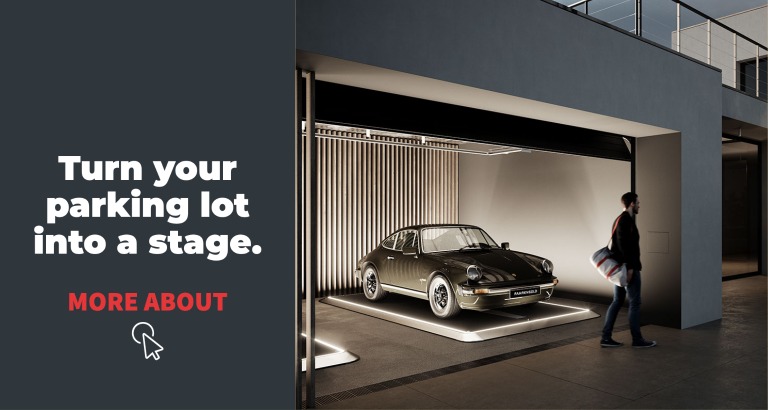