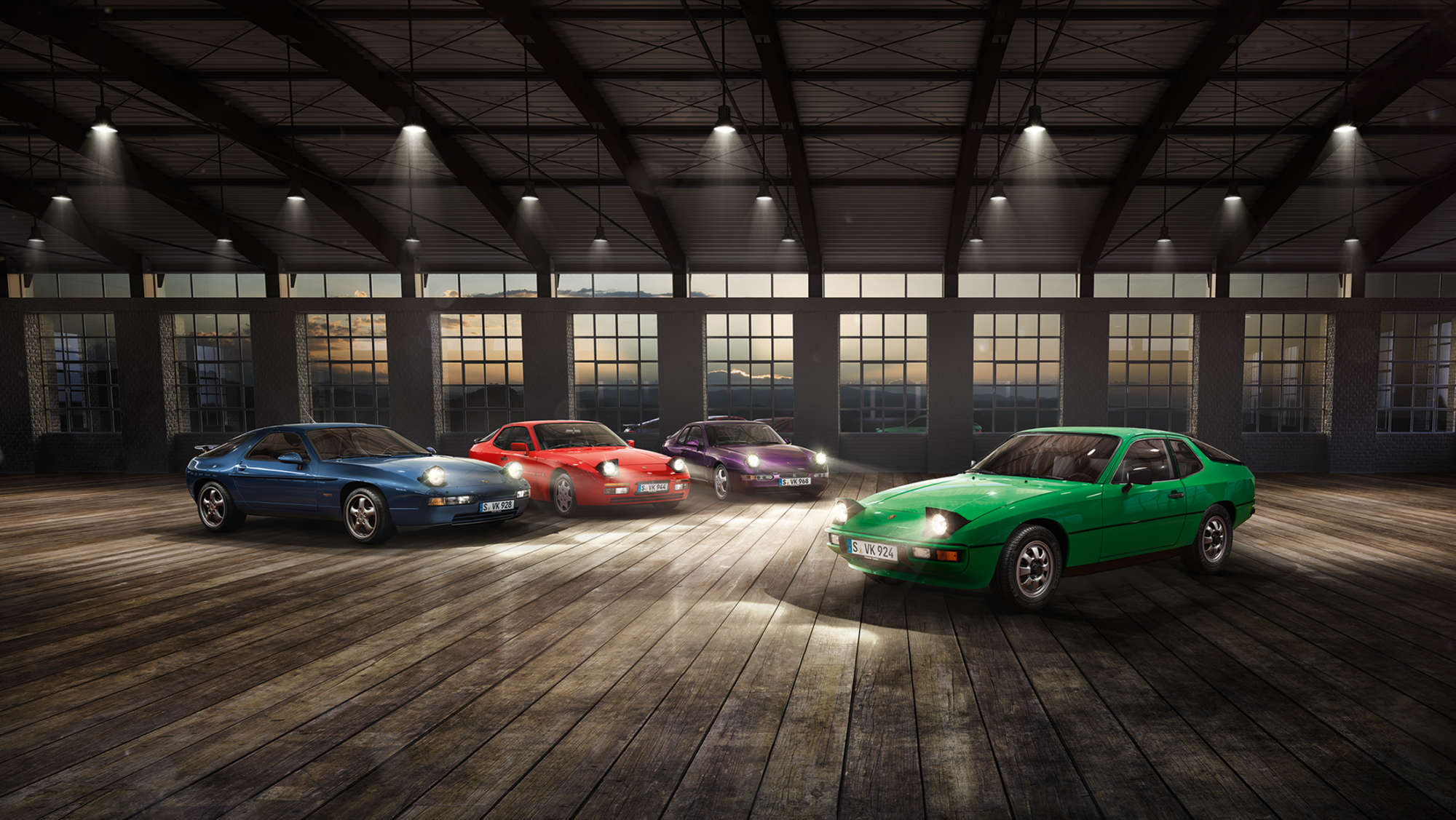 The transaxle era – When Porsche redefined itself

The 924 was a sports car without prece­dent. Engine in the front, transmission at the rear, and all manner of space in between. Forty years ago, Porsche astonished the public by presenting a modern four-cylinder sports car with a transaxle design. An advertising slogan lauding the “family sports station wagon” captured the vision behind it. And the car broke new ground. Just one year later, Porsche enriched the Gran Turismo world with the impressive 928. Again, the concept called for the engine in front and the transmission in back. But this vehicle was a futuristic sports car with an eight-cylinder engine. According to a brochure from 1977, the design of the 928 shook up automotive hierarchies by combining three cars into one: a thoroughbred high-performance sports car, a comfort-oriented luxury sedan, and a versatile utility vehicle. 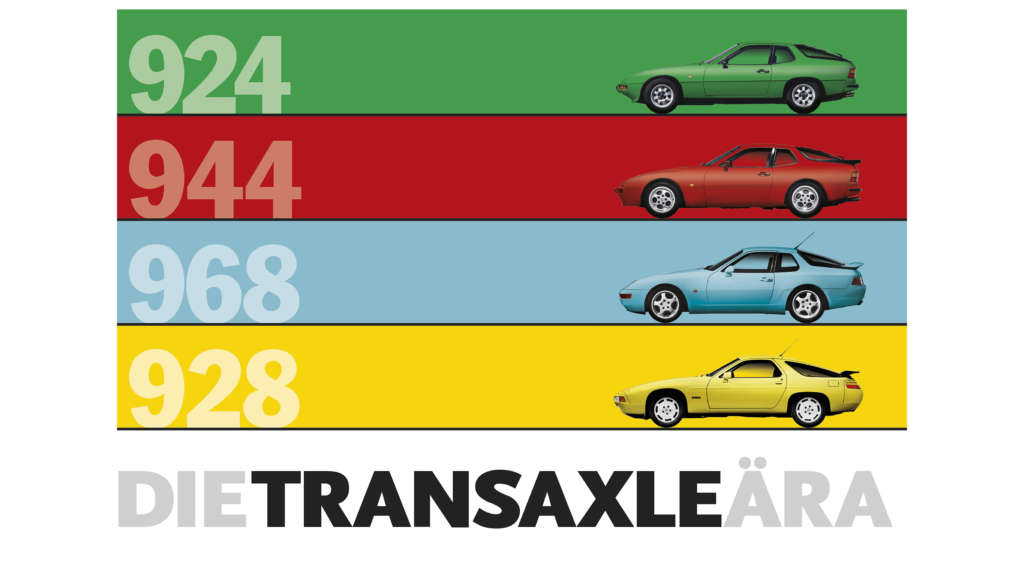 The term “transaxle” is a combination of “transmission” and “axle.” The engine transmits power to the rear axle via a driveshaft housed in a rigid cover pipe. In an age when drive systems did not have the benefit of electronic assistance, this principle was an innovative concept for a sports car. It ensured neutral and very stable handling qualities. Arriving at the same time as the rear-­engine 911, this addition meant that Porsche now had two transaxle sports cars whose optimized weight distribution and avant-garde design would leave a major mark on the automotive engineering of their era. The 928 was built over a period of nearly two decades. The Porsche 924 was followed by the 944 and the 968. The trans­axle era would not end until 1995—after nearly 400,000 cars had been built.

One man who was there for both the start and the finish of the transaxle era is 69-year-old Porsche designer Harm Lagaaij, who first joined Porsche in 1971. He developed the layout of the cars during these two important periods. As a young designer, he created the 924 and left Porsche soon afterward. He returned as head designer in 1989, whereupon he designed the final transaxle models: the 968 and the 928 GTS, as well as the last air-cooled 911. At roughly the same time, his team also created the first Boxster and the first water-cooled 911, and with them the modern era of the brand. The special exhibition at the Porsche Museum is therefore in part the story of Harm Lagaaij himself. His first big opportunity came in 1972, when Porsche’s head designer Anatole Lapine asked his team to make preliminary drawings for the EA 425 development contract. Lagaaij began to assemble his ideas in the form of sketches. He could not have imagined that he would end up giving form to the coupe that a few years later would become the best-selling sports car in the world. “I was a young designer, just 25 years old,” he says. “And yes, I had a major hand in the 924. It started off as a VW project. There were three final proposals for the exterior. One came from Richard Soderberg, one from Dawson Sellar, and one from me. All three were based on the transaxle package, and they were very different.” The three versions were presented in Wolfsburg as 1:5 scale models. “My design was chosen,” says Lagaaij. While he provided the overall style for the proportions of the 924, another designer supplied the car’s most striking feature. “The VW executive board was very taken by the large glass hatch on Soderberg’s proposal, so his glass dome was added to my design.” The interior of the 924 and the 928 was created by interior designer Hans Braun.

“The VW executive board was very taken by the large glass hatch on Soderberg’s proposal, so his glass dome was added to my design.” Harm Lagaaij: “Drafting the 924 was a purely intuitive process”

The rest is history, one might say. But that is not entirely correct. We know that the oil crisis led Volkswagen to discontinue work on the EA 425 in late 1974, even though the car was completely finished and already being prepared for production. We also know that Porsche then purchased all rights to the sports car and brought it onto the market in early 1976 as the 924. What is not widely known, however, is how the 924 was a clear and unmistakable Porsche right from the start—despite the use of Volkswagen and Audi parts. As Lagaaij observes, “The fact that this project was initially developed for Volks­wagen but then became a very successful Porsche shows how effective the original design was.” As for why the car clearly remains a Porsche to this day, Lagaaij says he always had the Porsche aesthetic in mind when working on the drawings, even though the job came from Volkswagen. “Drafting the 924 was a purely intuitive process. And of course its design was something of a surprise, because Porsche hadn’t made anything like it before.”

Just a few meters away from the young Lagaaij, the 928 was being created at the same time as the 924. In fact, photos of the design center back then show the two models together. Anatole Lapine was in charge of the 928 as well, and the original sketches of the Gran Turismo came from Wolfgang Möbius. When you look at the two models, you sense the synergies. “The transaxle structure was designed to improve the weight distribution. The goal was 50:50, and the proportions already reveal how that was achieved,” says Lagaaij. But to truly understand the similarities, you have to look at the details. Both models have a short front overhang, a very long engine hood, and a long roof. The overhang at the rear was meant to accommodate the transmission behind the axle and thus to perfectly balance the weight.

The most advanced sports car of its time

Most automotive journalists regarded the Porsche 928, with its co-steering Weissach rear axle, as the most advanced sports car of its time. Accolades came in from all corners. In 1978, it even received the top international award: European Car of the Year. Those innovative vehicles have now become coveted classics. The 924, 944, 968, and 928 models are increasingly of interest to collectors. “People were looking for a family resemblance back then. That was viewed as a formula for success. So I had to give the three series this recognizable quality.”

When Harm Lagaaij returned to Porsche in 1989, he found three model series that had little in common stylistically: the 944, the 928, and the 911 (964). “People were looking for a family resemblance back then. That was viewed as a formula for success. So I had to give the three series this recognizable quality.” In 1991, Porsche presented the first results of this family constellation with the 968 and the 928 GTS. “A priority was placed on highlighting the strategic design concept,” notes Lagaaij. The 993 model series—a 911 that differed markedly from its predecessors and whose front displayed an affinity to the 968 and the 928—took a similar approach in 1993. But two years later, the transaxle era was coming to an end, and by the summer of 1995 Lagaaij was already looking to the future. “We wanted a design that could remain effective for a long time.” With the first Porsche Boxster and the 996 series of the 911, the Porsche team found the resolution to this quest for the Porsche design of the future.