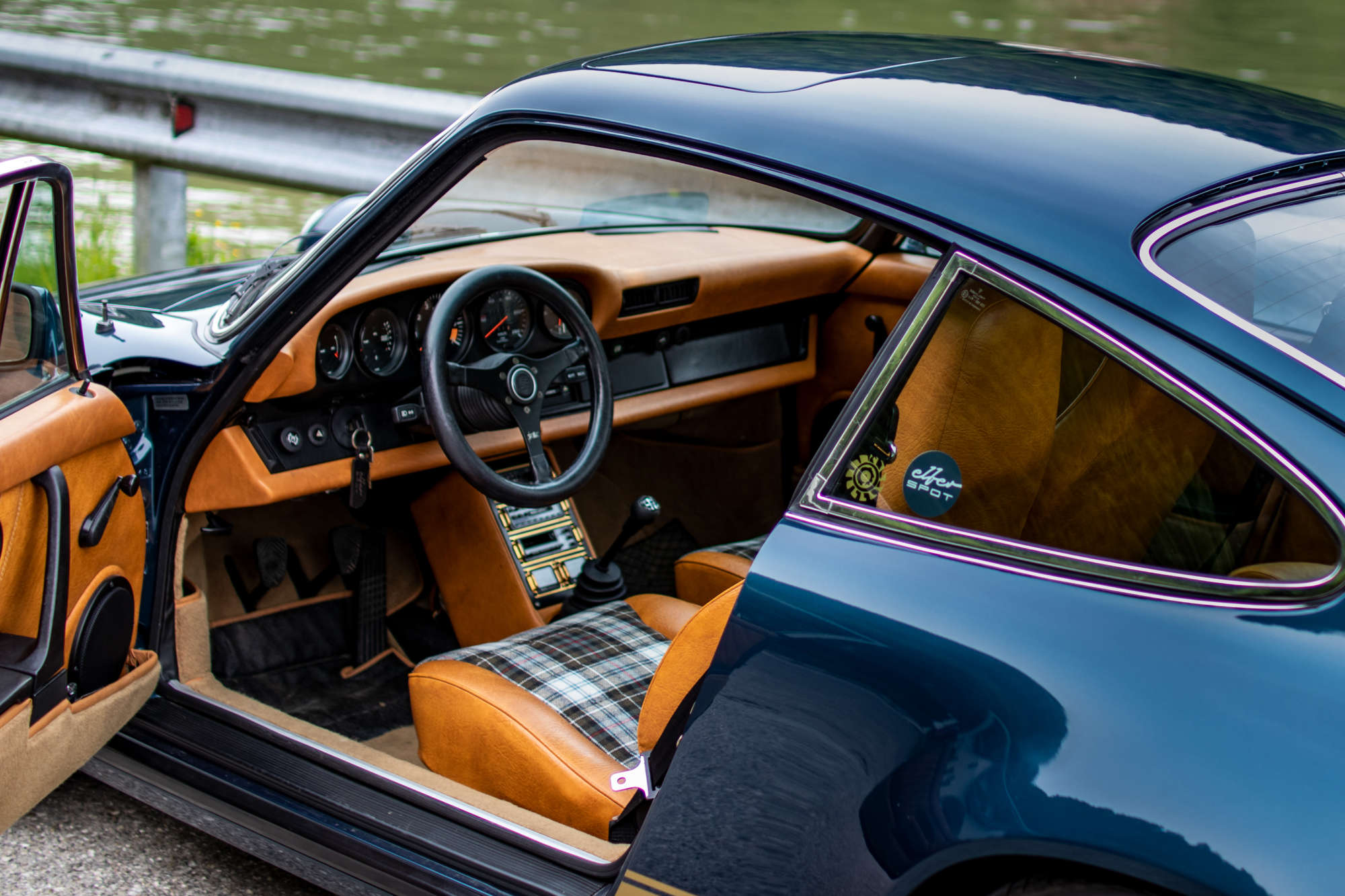 Porsche has always been a brand, not only reknown for sports cars with great performance – Porsche’s interiors are special in many cases. Sometimes, the used seat pattern split opinions. But isn’t that bravery and individuality the reason, why we love Porsche? Today, we want to take you on a very subjective journey through Porsche’s fanciest interior creations.

We’re starting gently here. Naturally, every sports car maker is proud to present its name. Porsche followed a very simple rule over the years: an emblem on the front, Porsche lettering and the model name on the rear, an emblem or lettering on the steering wheel. With the introduction of the Porsche Script seats, the Zuffenhausen brand showed the company’s name much more often. The design itself may look pretty subtle, but we don’t know, if there is any manufacturer out there, who wrote its own name that often in a car’s interior. Porsche Script was available in a variety of colors: blue, black, wine-red, linen and amethyst. Mostly offered in the transaxle models 924 and 944, the Porsche seat pattern Script hasn’t been used since the mid-90’s. We think, that’s a shame, isn’t it?

During the 70’s and 80’s, countless suits were decorated by them: pinstripes. Porsche took up that trend back in the day and offered pinstripe seat patterns in a huge number of color variations. At the same time, the so called flannelstripes were produced. They were very similar to the pinstripes, but the lines were dotted instead of the pinstripe’s continuous stripes. Chestnut brown with white stripes? No problem at all! Customer’s could order the wildest combinations in that era. The Porsche 924 Carrera GT for example had black seats with tangerine pinstriping: 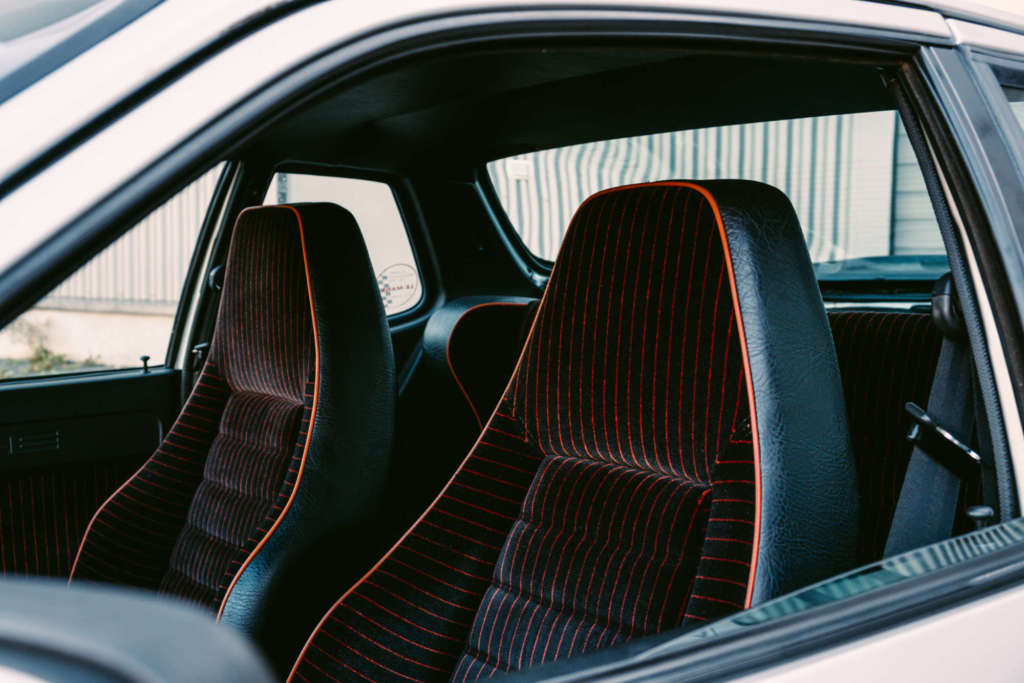 If you scroll through today’s classifieds, many transaxle models are equipped with pinstripe interiors. Many customers ordered their 911 G-models with the Porsche pinstripe seat pattern as well. Porsche, being a very tradition-conscious manufacturer, offers similar interior designs today. Many Porsche 991 models, especially Carrera Ts were often ordered with Sportex seats in the classic dotted-line-design: Our third place in Elferspot’s Porsche seat pattern hitlist goes to the Porsche Pepita Karo, which was mainly used in the Porsche 911 F-model of the 1960’s. In most cases, customers ordered the black/white Pepita seats with black leather side bolsters. Combined with a classic wooden steering wheel and the green dials, it does look like a really classy interior. Pepita Karo was also available in black/red, black/green and black/brown. Just like the striped cloth seats in the flannelstripe design, Porsche customers can order the Pepita Karo seat pattern in today’s models. The Porsche 991 Carrera 50 years edition had the Pepita Karo as an interior option, for example. Same applies for the 991 GT3 Touring and Spyder models. Order it with earth colored leather and you’ll be rewarded with lovely contrasts and a very tasteful interior, which fantastically represents Porsche’s design tradition. 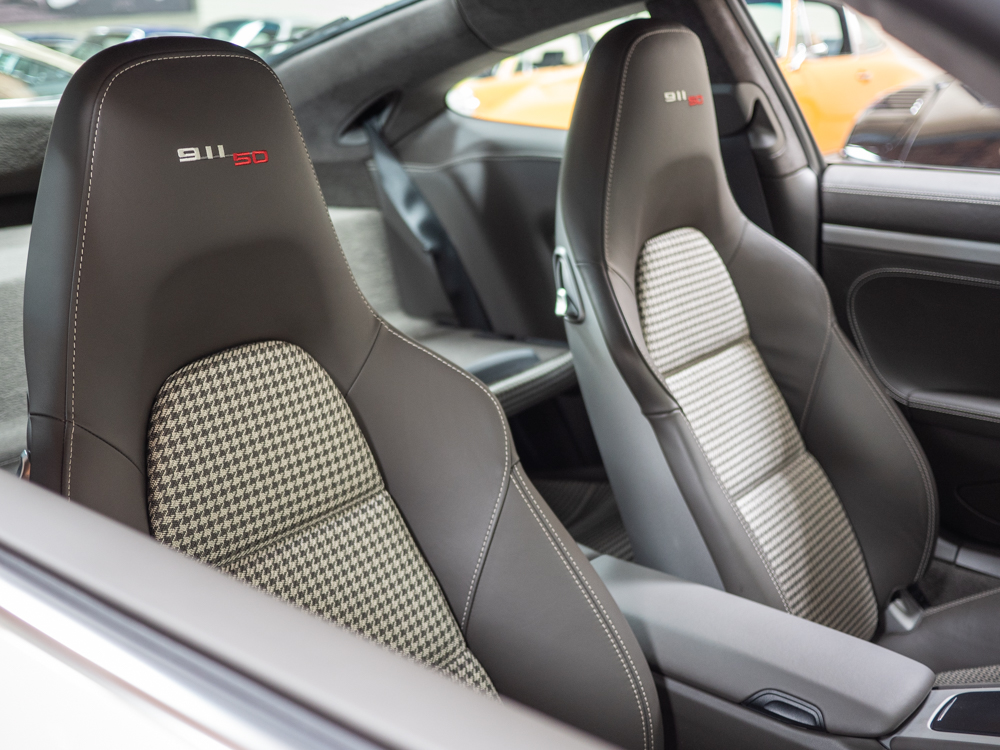 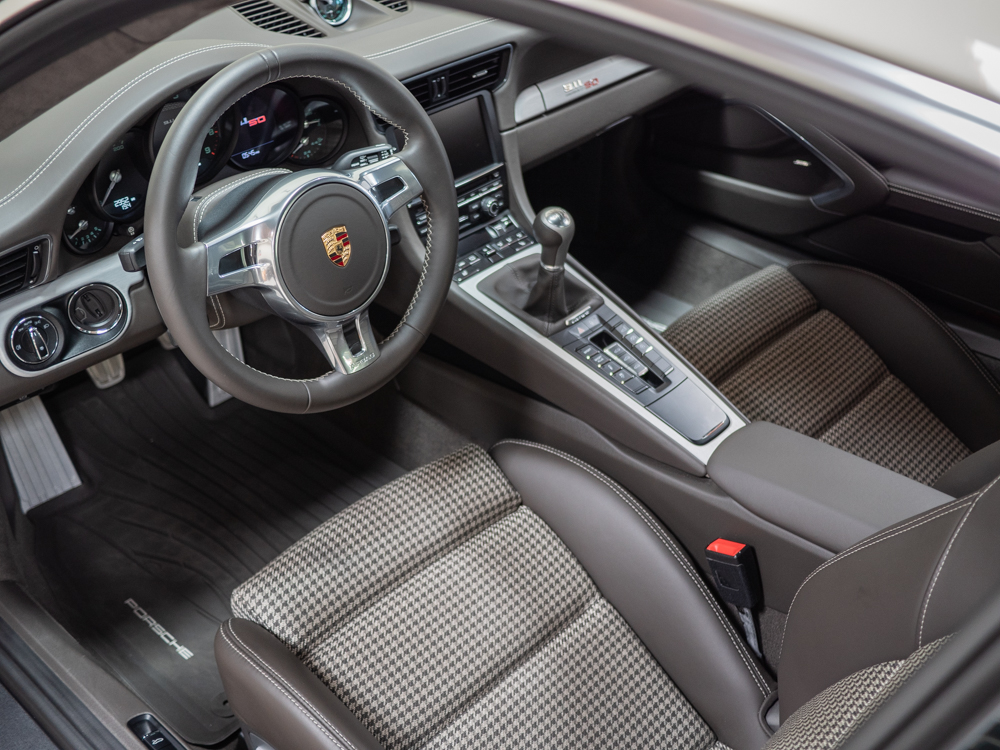 Another 70’s fashion trend had been the tartan design. The idea itself was borrowed from the Scottish kilts and their so called “clan tartans”. You could have ordered your Porsche with pretty mad color combinations back then. Especially the Turbo models were often ordered with these Porsche seat patterns. The reason for that might very well be the Porsche 911 Turbo “Louise” – the first 911 Turbo ever and a present to Louise Piëch. As she was a passionate painter, she was pretty bold in terms of her interior styling. Nearly every single surface in the cabin was covered in Porsche’s Tartan pattern. She even went for red leather side bolsters, which sounds very weird, but, amazingly, looks pretty pleasing. Many backdates and modified 911s use the Porsche seat pattern “Tartan” nowadays. As a contrast to the otherwise pretty functional interiors of the 70’s and 80’s Porsches, it does the job pretty well. Who owns a car with Porsche Tartan always makes a pretty clear fashion statement. If you look at today’s cars, you often see Porsche 911 GT3 Tourings and Spyders equipped with Porsche Tartan. Let’s be honest: There can’t be a Top 5 of Porsche seat patterns without the Pascha seats. Porsche’s psychedelic 70’s and 80’s interiors were a must have for many customers. It shouldn’t hit you by surprise, how many 924s, 944s, 928s and G-model 911s are out there with the Pascha seat pattern. As you may have guessed already, who ordered Pascha seats, often decided to paint the car itself in a very contemporary manner as well. Roughly 40 years ago, Porsche customers seemed to be a bit more fashion conscious… 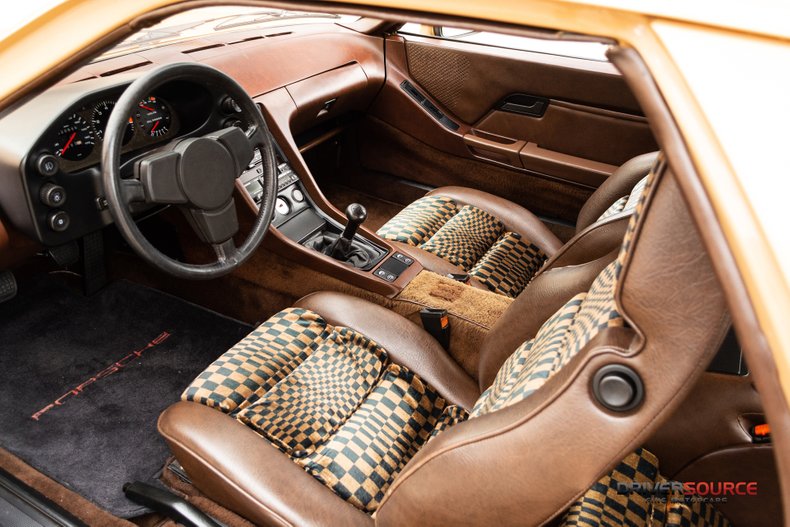 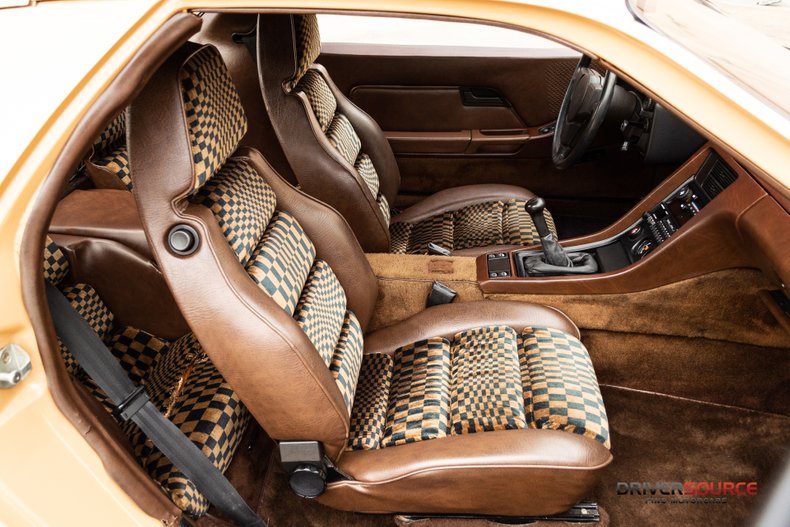 In case you wanted a Pascha interior, you’ve had plenty of choice in terms of colors: white/brown, white/red, black/blue, black/white and so on. Until today, there hasn’t been a Pascha revival for new Porsche sports cars. But who knows, maybe Porsche’s Heritage Department recreates the Pascha seats at some time?! 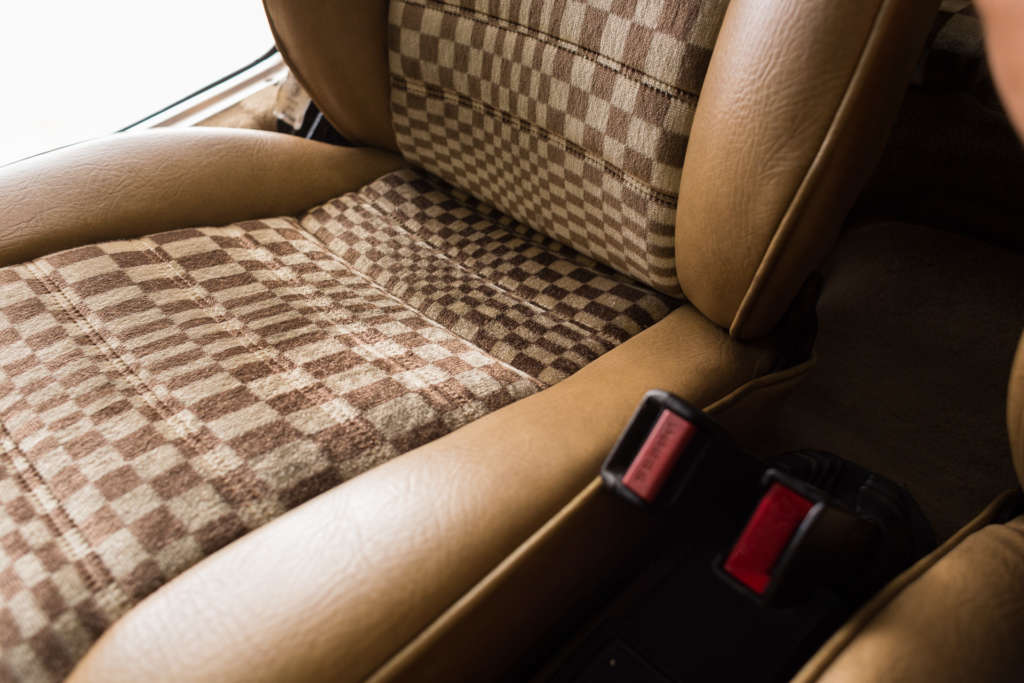