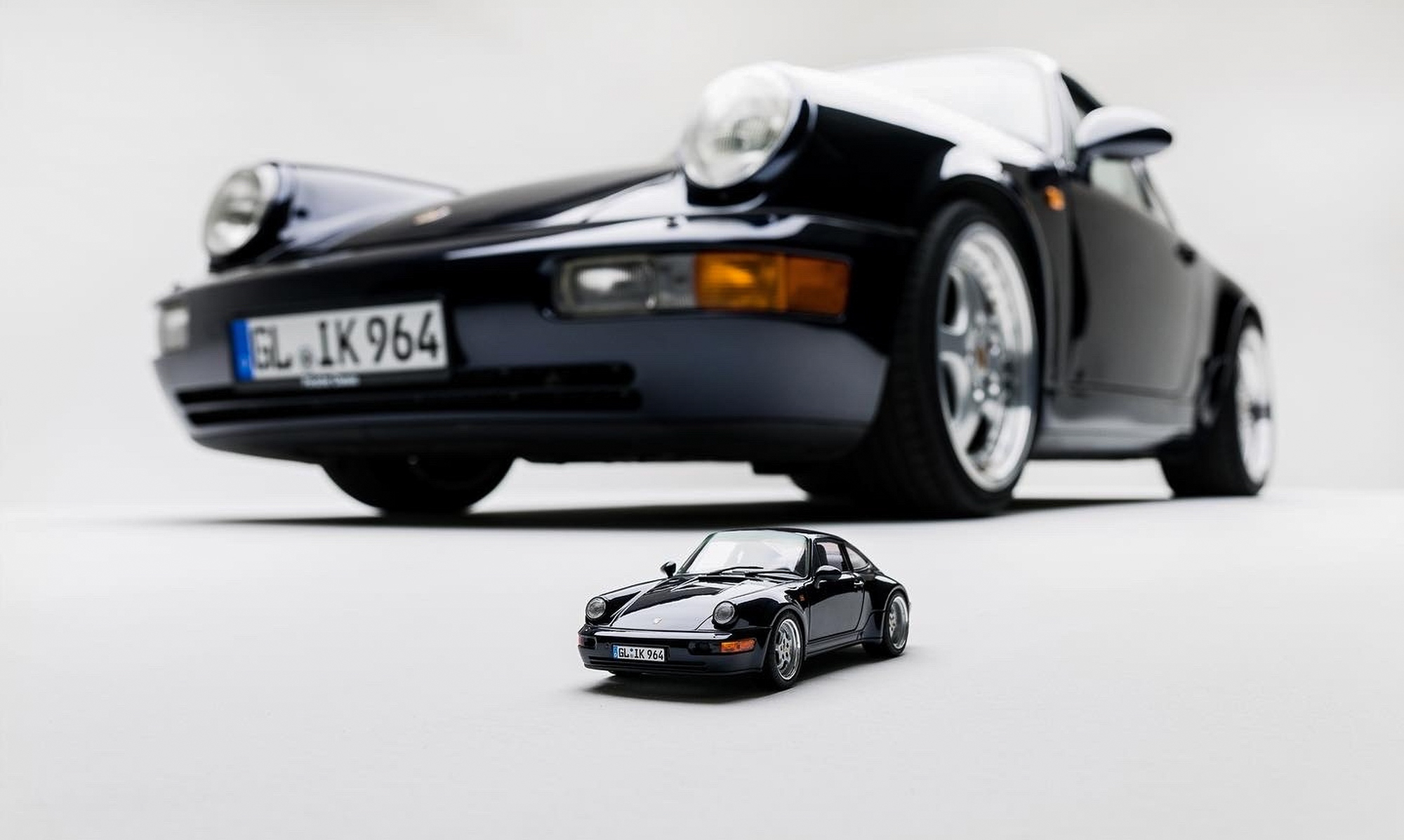 Having your own Porsche on your desk, true to detail in 1:18 – a pretty cool idea. That’s exactly what Kay Kosar from Neunellymodels offers you. Kay builds Porsche model cars to customer specifications, true to the original and with a love of detail. I met Kay at the Techno Classica in Essen. During a walk through the fair, he revealed to me how he came to build deceptively realistic replicas of Zuffenhausen sports cars. I was particularly surprised by the emotions this can evoke in clients.

Kay, the company name Neunellymodels already hints, where your focus lies. But what was the trigger that brought you to Porsche models in 1:18?

As a child of the 70s, the Porsche 930 Turbo was of course THE car for me. I come from Hamm in North Rhine-Westphalia. In the local pub, where there was a lot of talk about football, a certain Horst Hrubesch would show up from time to time. And exactly this Horst Hrubesch drove up one day in a Porsche 911 Turbo. Those wide hips, the big spoiler, speedometer up to 250… I was immediately hooked and really wanted to drive a Porsche someday, too.

I then found my way to model building via yor ordinary Revell kits. This significantly deepened my approach to cars. I began to understand, how many components have to come together to make a car run. It was then probably logical, that I did an apprenticeship as a car mechanic. During my apprenticeship, I drove a Porsche for the first time. My boss at the time gave me (just 17 years old and not allowed to drive by law…) the key and told me to move the car. Of course, I could hardly get out of the way and stalled the car more than once. The growing Kay’s ego was a bit bruised, then (laughs).

But you recovered quickly from that, it seems…. What moves you today?

You’re right, but at first it made me feel very insecure. Young and naive, I had no idea at all, how the interaction between clutch, transmission and engine worked harmoniously and thought it would be easier. In the meantime, I know that no other manufacturer harmonizes that interplay as beautifully as Porsche. That’s why my path was probably somewhat preordained… Today I drive a dark blue Porsche 964 Carrera 2 and a fast 996 Turbo.

How did you come up with the idea of building Porsche models to order?

I built these for myself, just for the sheer fun of it. And other people liked them too! At first I built models for friends and acquaintances. Bit by bit it became more and more. Especially Porsche 356, which I consider stylistically one of the most beautiful cars ever, I have built many. These cars are so changeable and timeless in their design language…

If you put your heart and soul into something in life, it usually turns out well. That’s obviously how it was with my models.

I think we’ve all had a car in our lives where we say, “I wish I hadn’t sold that!” or “That’s my absolute dream car”. For car fans like us, Porsches in particular are much more than a means of transportation. They are joy dispensers with which we experience unforgettable stories. And in the meantime, I know that you can evoke almost the same emotions with detailed replicas of them. I feel very fortunate, that I can live out my passion in this and at the same time make wonderful contacts with like-minded people. Today, requests come to Neunellymodels from all over the world and I work, for example, with AP Car Design from Göttingen and some renowned racing drivers.

What kind of reactions to the Neunellymodels come to your mind first?

I’ll give you an example: A customer of mine wanted a replica of his race prepped Porsche 911. He sent me a whole bunch of photos along with it, so I quickly knew where to go with it. I noticed that in some of the pictures there was a pair of gloves on the dashboard. So in the model, I put those exact gloves “on the dashboard” as well. When the customer saw this, he called me upset and said I couldn’t do that. Upon my gobsmacked query, he said that he had these gloves on when he recently made acquaintance with a guardrail. He has not used the gloves since then. I didn’t know that, of course, but the mere sight of them made him relive it all. Of course, I then replaced the gloves (in 1:18 scale, these are 10 mm).

But even in everyday life, a 1:18 Porsche gives you a whole lot. Sometimes even more than the original! Most of us don’t drive our Porsche every day, but keep it in the garage for a long time, for example during winter. So they only see their own car quite rarely. However, if I have my own car, faithfully reproduced, on my desk, I can even admire it at work. So a model car can provide a short mental vacation, an escape from everyday life in 1:18, so to speak. Of course, a lot of fun is added when the models are then positioned in deceptively real-looking dioramas and usually raise the question in the eye of the beholder: Is this a real car or is this really a model car? I assemble most of the dioramas myself, always with the same goal: It must look absolutely real!

What exactly is the process of building a Porsche model car at Neunellymodels?

First of all, I need a precise objective. Base vehicle, color choice, interior, rims and the small details. The more photos there are, the better. There are limits, of course, but almost anything can be done. For example, if you have special stickers on the car or a roof rack with skis on it, then I discuss the feasibility with my partners. The engine can also be reproduced in detail. When everything is agreed, the vehicle is assembled 100% by hand.

And where are the limits of what is possible?

Of course, I try to push them further, as best I can. There have already been some very small-scale customer requests. One major challenge, for example, was a very special frunk with an additional fuel tank, where we needed a few attempts to get the decorative seams of the leather trim right, for example. Incidentally, it wasn’t easy at all to build up a good network.

Painting such a small model car, for example, is much more difficult than painting a real car. You need experience and an extremely steady hand. Especially more complex designs with very filigree stripes and contours are incredibly difficult to implement. Depending on the scope of the extra requests, the construction itself takes a few weeks. But the order books are pretty full. You therefore need to plan a year in advance.

Even a 1:18 Porsche can need spare parts. Can you get them from you too?

Dt is possible, of course. As in any good workshop, we also have a lot in store in the 1:18 Neunellymodels workshop. However, the flood in the Eifel are in July 2021 hit us pretty hard. The whole workshop was flooded and so was the warehouse. After the water was gone, the mud remained. About a third of my parts stock was irretrievably lost. But if something should really break, we will find a solution.

How did you deal with this blow of fate?

I would say with a large portion of gallows humor. At first, of course, you’re faced with a huge pile of broken pieces. However, it was clear to us very quickly, that we would continue. That’s why we immediately started cleaning up. In this way, we were able to save the remaining two-thirds of the inventory in painstaking detail. We resumed operations just two weeks after the disaster. Thanks in part to the truly incredible willingness to help from the community. It’s good to know, that we Porsche fans stick together when things get tight. Almost all the damage has now been repaired.

Kay, I’ve got one traditional last question for you: Which is your dream Porsche?

If money were no object at all, it would be an air-cooled turbo, certainly a Porsche 964, as a speedster, still with a cage, very trackday capable, in Polar Silver, with really a lot of power. Let’s say 500 hp plus. An air-cooled Porsche that accelerates from 0 – 200 km/h in under 10 seconds and that manages a lap time under 1:59:00 in Hockenheim “open”, that would be an absolute dream for me… by the way, it is already built in 1:18!