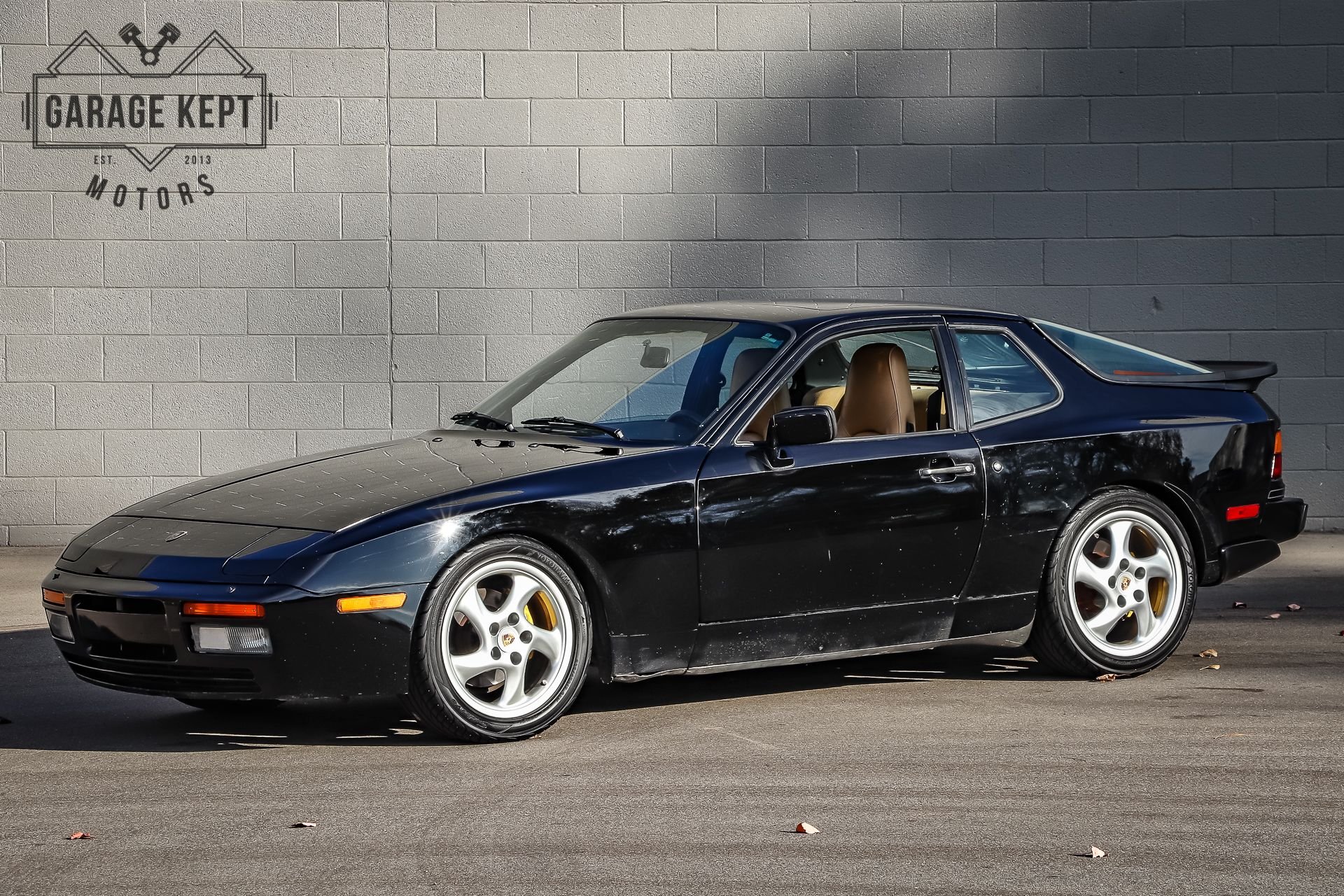 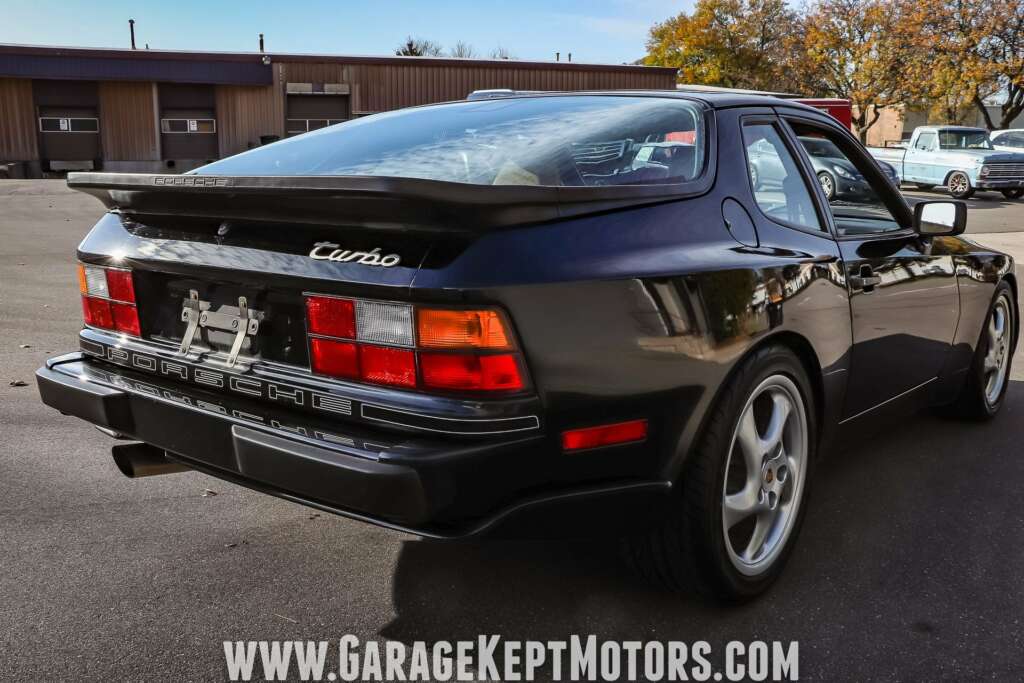 “For lunch it prefers Ferraris, but it has been known to snack on Corvettes.” –Porsche 944 Turbo magazine ad

The simple truth—as noted in the Porsche ad quoted above—was that 944 Turbo power and performance was more than competitive with Ferraris and Corvettes of the day. Back in 1986 when the 944 Turbo was launched, a writer for the European magazine, MotorSport concluded his review and made that very point: “It is said that car enthusiasts aspire either to a Porsche or a Ferrari; I confess to a strong Mediterranean (i.e., Italian) leaning amongst the normal run of test cars, but a week with the 944 Turbo has suddenly put me in danger from that mythical creature the two-horned dilemma.”

That writer’s assessment of the 944 Turbo’s handling was part of what impressed him: “On dry roads the traction of the rear tires is almost unbreakable and where mud, water, or a severe bump momentarily separate road from rubber, any slide which results is brief and predictable almost self-correcting. Instantly obedient to small steering movements, the chassis displays the mildest understeer as the car settles into a corner then balances itself effortlessly as the throttle opens. It feels quite neutral as the lateral forces build up and the amount of grip available is terrific: push it harder and harder and the tail begins to hint at oversteer, but this happens at such high speeds that it would be almost impossible to find a bend on the road long enough to push it that far. Lifting off makes the nose drop and tuck in but not enough to upset the rear, making this a safe method of fine adjustment to back up that delicate steering.”

And the car’s power delivery caught his attention, too:“Even in fifth gear the car is very quick; play with the well-spaced pedals to slot into third and it bolts forward, gulping the longest straights without pausing for breath. There is an electronic fuel cut-out at 6,500 rpm, should the driver be too busy looking at the road to notice the tach needle, but with acquaintance one learns to select one gear higher than normal and let the turbo do the work. With 2nd, 3rd, and 4th gear speeds of 66, 97, and 132 mph, there is plenty of headroom. The brakes feel very strong, well able to control the car.”

The fact is—as a great many Porsche enthusiasts know, and market valuations over the past few years have reflected—the 944 Turbo’s combination of one of the largest displacement 4-cylinder engines ever made with a front-rear almost 50-50 weight distribution in an aerodynamically smooth body manufactured with Porsche’s legendary attention to detail still makes for a compelling 1980s-based driving experience.

Offered here is a black-over champagne partial leather 1986 944 Turbo that has been well maintained over the years, and has benefitted from substantial recent service work. In-the-know prospects for this car will appreciate that its 135,000 miles—a very modest under-4,000 miles per-year average—together with its excellent mechanical condition and accident-free history makes for a very desirable candidate.

Porsche has long been known for the quality of its paint work, especially, as is the case here, when the paint is one of the company’s non-metallic, single-stage colors; here (LO41) black. While there is light patina on some surfaces, overall the car’s exterior finish is excellent. Matte-black window trim is also in good condition. Body-panel fit and finish retains factory tolerances, another Porsche strength. Doors shut with the characteristic bank-vault solidity. Cabin glass—including on the expansive hatch—is clear and un-cracked, as are all lighting lenses. There are no exterior modifications from stock. Badging is correct and properly located. Dino Wheel 17” Turbo twist-style 5-spoke wheels (with Porsche-crest center caps), Yokohama S performance tires, and yellow brake calipers fill the wheel wells.

Inside, the champagne-color leather seating surfaces are in good, largely undamaged condition overall with the exception of the driver’s seat. Its cushion shows wear and the leather upholstery on the outside upper seat bolster is torn. These flaws are cosmetic and do not affect drivability. The dash covering—often cosmetically flawed on these cars—is not damaged, cracked, or warped from the sun. The face of the black dashboard is in excellent condition with all switchgear in place. The car’s original 5-speed console-mounted shifter and boot are in excellent condition as well. (The position of the shifter in relation to the driver’s seating position in these cars is considered to be optimal for sport driving.) The full array of gauges feature aftermarket white faces. Champagne carpeting is in good condition throughout the cabin, including on the lower portion of the door trim, and on the transmission tunnel. The carpeted rear cargo compartment features a roll-up cover and retains the factory-equipped spare-tire inflator kit.

The owner’s attention to the servicing of the car is evident under the hood. Not only are engine surfaces clean, but all wiring and “plumbing” is properly routed. No modifications from stock are evident. The air-conditioning system, however, has been upgraded to R134 refrigerant. Underneath the car, while the lower forward cover is missing beneath the engine (as is often the case with cars of this age), all other components are present and free of damage. The 944-series bodies were galvanized at the factory so no body rust is evident. Koni yellow sport shock absorbers are mounted. It is noteworthy that the exhaust system shows no sign of the sort of damage that often arises from too-aggressive driving or track use.

The car was fully serviced just 200 miles ago including all fluids flushed and changed, the critical timing belt replaced, and a fresh oil change. An array of documents verifying recent services accompanies the car.

The condition of this 944 Turbo is faithfully presented in the more than 170 high-definition photographs together with a short walk-around-and-startup video, and a link to its accident-free Carfax report available at the GarageKeptMotors site. That said, there is no substitute for an in-person, up-close inspection. We encourage such inspections by interested parties at our Grand Rapids, Michigan showroom. We ask only that an appointment be made by phone or email in advance. Our showroom is not open to the public.

There’s another period Porsche 944 Turbo magazine advertisement touting, among other things, the car’s 152-mph top speed. The headline: “It goes like a bat out of Zuffenhausen.”

Prospective purchasers for this black 944 Turbo may want to hurry. We figure it’s likely to “go like a bat out of Grand Rapids

(Please note: If you happen to be viewing this 1986 Porsche 944 Turbo on a website other than our GarageKeptMotors site, it’s possible that you’ve only seen some of our many photographs of this vehicle due to third-party website limitations. To be sure you access all the more than 170 photographs, a short walk-around-and-startup video, and a link to its accident-free Carfax report, please go to our main website: GarageKeptMotors.) 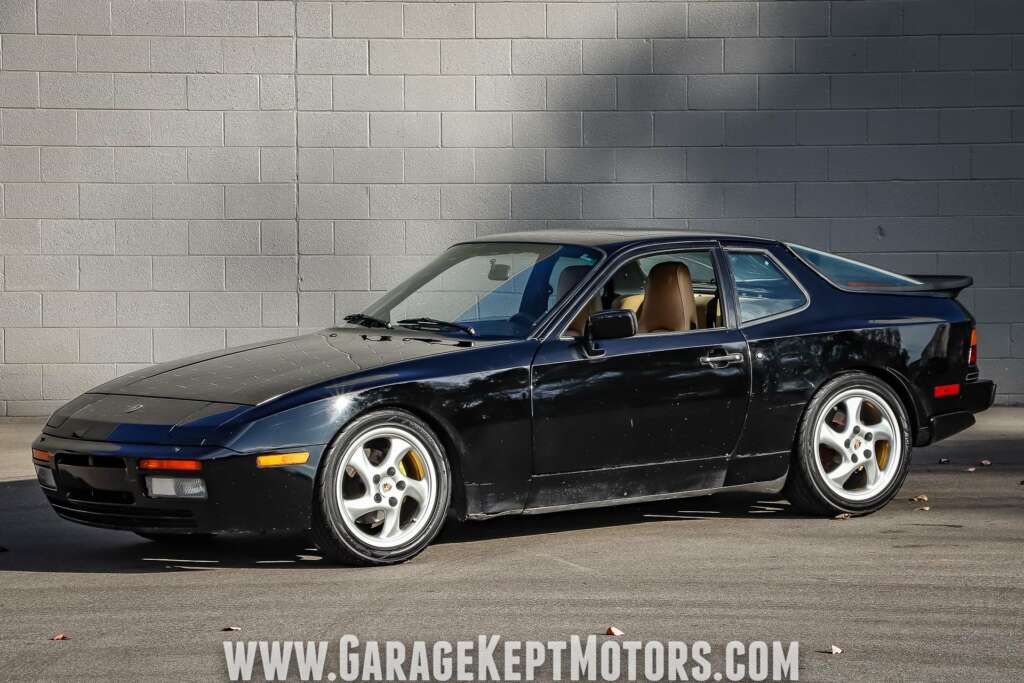