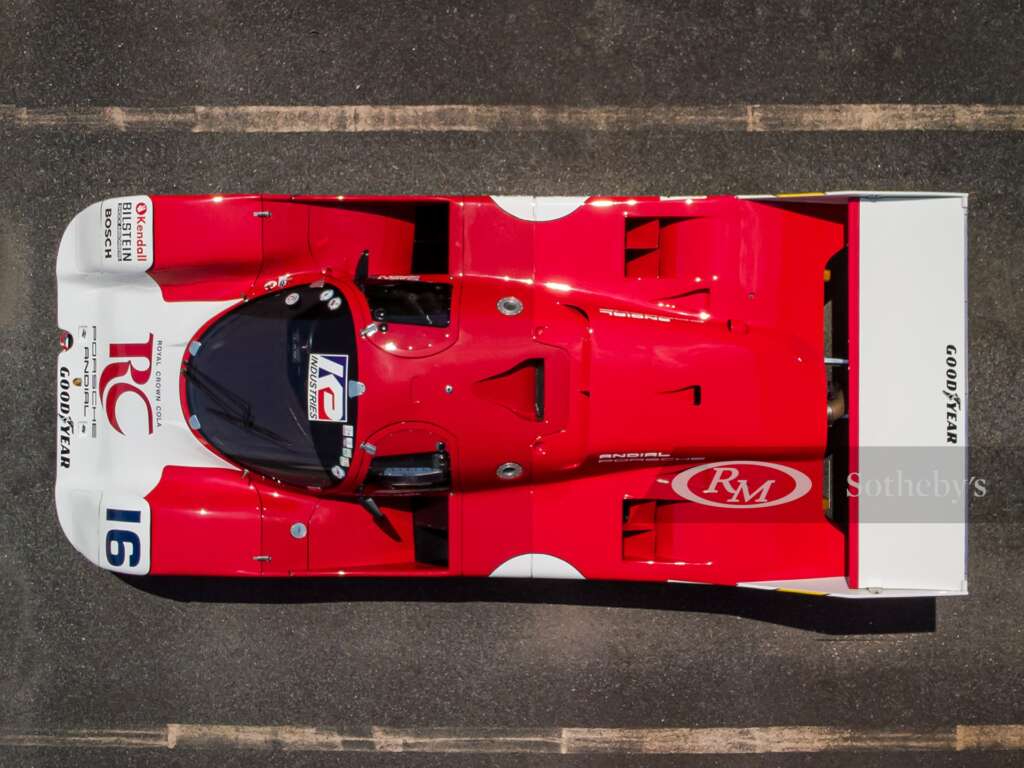 Few, if any, racing cars require less introduction than the ground-breaking Porsche 956 and its evolutionary sibling, the 962. With some 17 wins in the sports car “Classics” – a remarkable ten of which occurred Stateside courtesy of the longer-wheelbase, IMSA-eligible 962 – it remains arguably the greatest endurance car of them all.

Although the 956 had appeared in Europe as far back as 1982, it was not eligible for IMSA events, with many competing teams forced to rely upon Porsche’s ageing 935 until such time that an IMSA-sanctioned version of the car was available. The major points of difference as far as the governing body were concerned were fourfold; firstly, the GTP rulebook decreed that the driver’s feet must be behind the front axle, whereas the 956 placed them in front; secondly, the 956 utilized a ‘non-production’ based engine whereas only production-derived units were eligible for US racing; thirdly, the 956 featured an aluminum rollcage which IMSA had outlawed in 1983; and finally, the 956 fuel capacity of 100 liters was some 20 shy of the minimum required for GTP regulations.

To the relief of well-funded privateers such as Holbert Racing, Bob Akin, and Preston Henn, the new Porsche 962 made its debut at the 1984 Daytona 24 Hours, courtesy of a single Works-entered car driven by Mario and Michael Andretti. Fitted with a single turbo, air cooled head type 962/70 engine, loosely based on the production 930 Turbo unit (as opposed to the bespoke twin-turbo, water-cooled head type 935/76 engines used in Europe), the car dutifully complied with GTP regulations and customer versions were sold to the US by the season’s end.

As had been the case in Europe with the 956, the 962 was an immediate success, with Al Hobert and his eponymous team securing back-to-back IMSA GTP Championships in 1985 and 1986. In 1985, SCCA stalwart Rob Dyson and his Poughkeepsie, New York-based Dyson Racing squad had graduated to the IMSA GTP ranks with chassis 962-101. They immediately set their sights on challenging the Holbert hegemony with a selection of accomplished drivers including Drake Olson, Price Cobb, Bobby Rahal, and Dyson himself, with Cobb finishing second in the 1986 GTP Championship.

Dyson had two 962s at his disposal for 1987, now powered by the ultimate specification 3.0-liter 962/72 engines which boasted a higher rev limit and almost 700 bhp. This car, chassis 962-122, debuted in its current form (having been rebuilt with a replacement tub after an accident at Watkins Glen the previous year) at the 12 Hours of Sebring. There it was driven by 1983 Le Mans winner Vern Schuppan and Price Cobb; the latter himself a winner in 1990. The pair qualified an encouraging 3rd behind the pacesetting Holbert Racing 962 of Al Holbert and Chip Robinson and the Bayside Disposal Racing car driven by Jochen Mass and Bobby Rahal. Schuppan and Cobb were running strong when an accident eliminated them from the race before half distance.

The next round of the championship at the Road Atlanta 500 KM in mid-April saw a dramatic and very welcome upturn in the car’s fortunes. Highly rated Briton James Weaver joined Price Cobb in 962-122 on this occasion, the former marking the start of a near 20-year relationship with the Dyson team. Although the pair had qualified 4th for the 500-kilometer race, they led the way for a Porsche clean sweep of the first five places, with defeat of the rival Holbert Racing 962 of Holbert/Robinson proving particularly sweet.

Later that month, team owner Dyson joined Cobb in 962-122 at Riverside, qualifying in 4th place less than a tenth of a second behind the formidable Holbert/Robinson combination. The race saw the Dyson squad finish as they had started, while the Holbert 962 took 2nd behind the victorious Group 44 Jaguar XJR-7 of Hurley Haywood and John Morton.

The potential setback of a 20th place finish (after taking pole) at Laguna Seca in early May was negated by the Holbert 962 failing to even take the start. However, normal service was resumed at Lime Rock in late May with Holbert driving to victory solo in the 150-lap race, although Weaver and Cobb picked up valuable championship points with a 3rd place finish behind the Roush Racing Mustang GTP of Pruett and Halsmer.

The Mid-Ohio 500 KM proved something of a missed opportunity, with Weaver and Cobb suffering a costly retirement – albeit remaining classified 13th – while Holbert and Robinson finished 4th. However, a congested late summer period of three races in four weekends proved to be a productive one for Dyson Racing; Cobb driving solo to 3rd and 2nd place finishes at Portland and Sears Point, respectively, while a long overdue second victory of the season came their way at Road America. At Elkhart Lake, Cobb had been joined in 962-122 by Grand Prix refugee and Dyson rookie Johnny Dumfries, who had underlined his credentials as an emerging Sports Car talent, going on to win Le Mans for Jaguar the following year.

In contrast, the final three IMSA rounds in which 962-122 competed were something of a disappointment. Retirements – classified in 10th and 7th places – at San Antonio and Columbus, driven by Cobb/Dumfries and Dyson/Dumfries, respectively, were followed up by a 5th place finish courtesy of Cobb in the final round of the championship at Del Mar in California. This proved to be 962-122’s competitive swansong and ensured that once again Cobb finished as Championship runner-up to Holbert Racing, albeit to Robinson this time rather than his team boss.

At the end of the 1987 IMSA season, 962-122 was retired from competition by Dyson Racing and in 1989 was sold – via long-time Porsche authority Gunnar Racing – to the current owner, who has remained its proud custodian ever since. In 1993, a complete mechanical and cosmetic restoration of the car was entrusted to former Holbert Racing employee Bob Russo, with the intention of the vendor competing in vintage races. The car has since competed in several prestigious events, including the 2011 and 2015 Rennsport Reunions, where it was driven by two-time Sebring 12 Hours podium finisher and Le Mans class winner John O’Steen.

Fittingly, the 962 has more recently been driven on several occasions by Skylar Robinson, whose father Chip enjoyed so many great racing battles against 962-122 in period. In 2016, Skylar competed in both the 24 Minutes of Daytona and the Monterey Rolex Reunion at Laguna Seca, the latter resulting in 2nd place in the combined Group C/IMSA GTO/GTP race behind another Porsche 962. The car was last competitively driven by the consignor and Skylar Robinson at the 2018 Rennsport Reunion and has since been subject to a further mechanical restoration by Bob Russo. This has included the installation of a fresh Porsche Motorsport North America-built engine, a brake system overhaul, and a complete chassis rebuild.

With their prodigious performance and purposeful looks, the IMSA GTP leviathans of the 1980s and 1990s remain amongst the most charismatic cars ever to take to the track. In light of this, 962-122 – having been campaigned by one of the most successful privateer Sports Car teams in history, driven by three Le Mans-winning drivers, and in single ownership since 1989 – represents one of the finest and most historically significant examples of this very desirable breed. Immaculately presented and highly competitive, it would ideally be campaigned once again in either the North American or European Historic Group C and GTP series for which it is eligible. 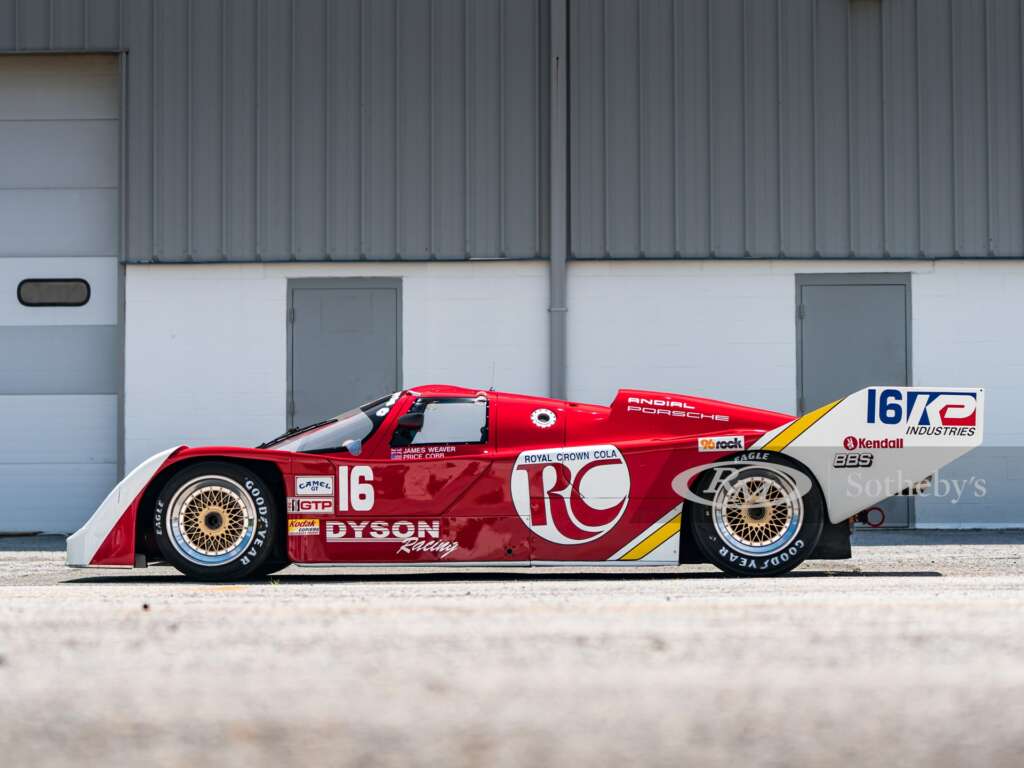 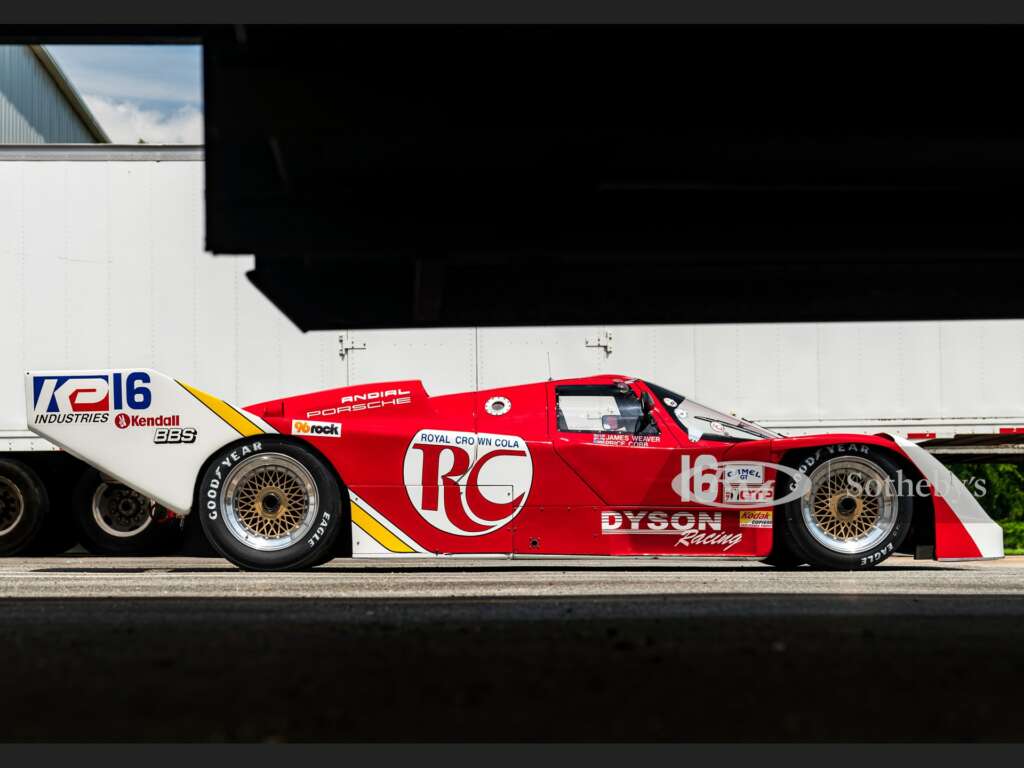 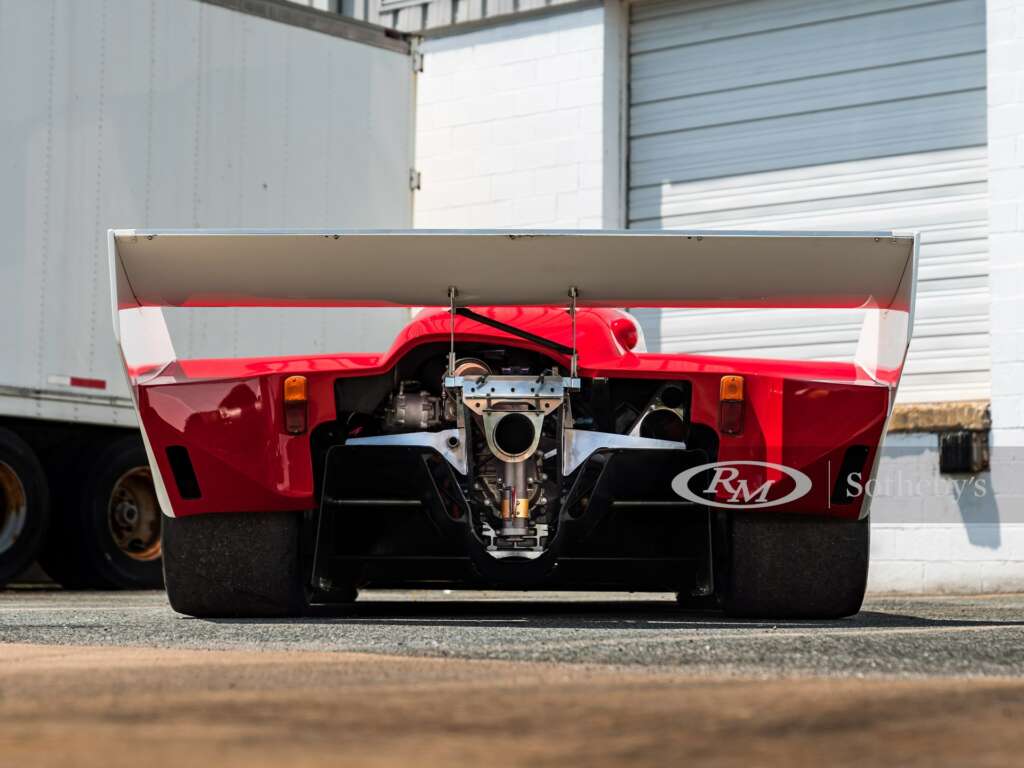 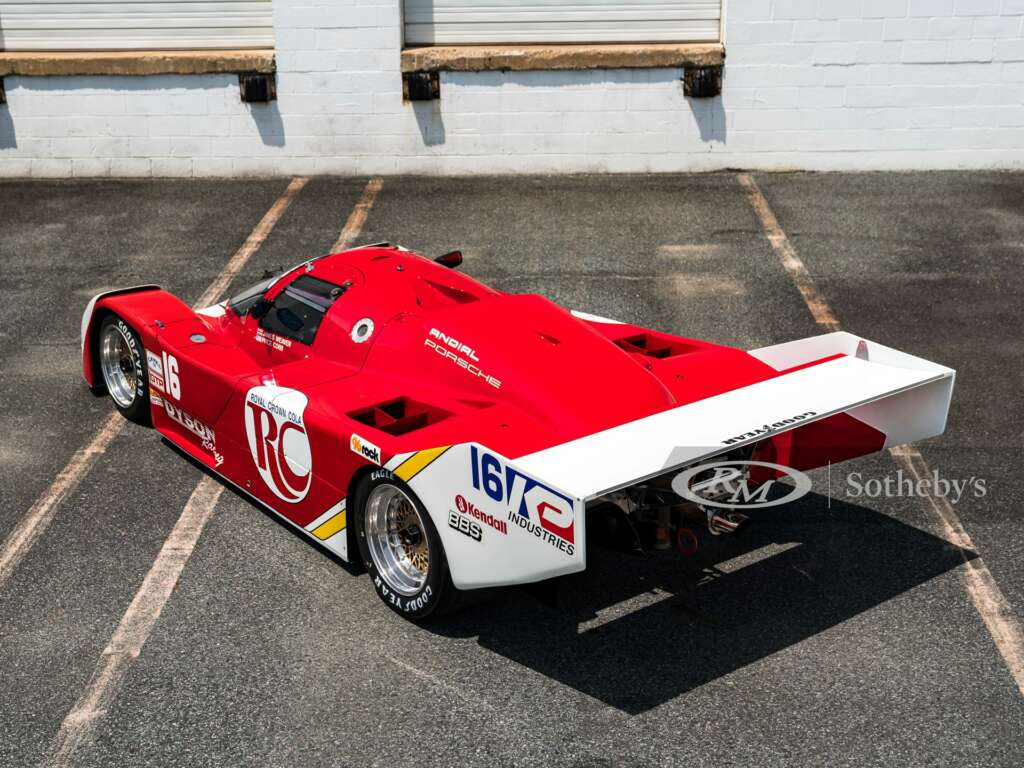 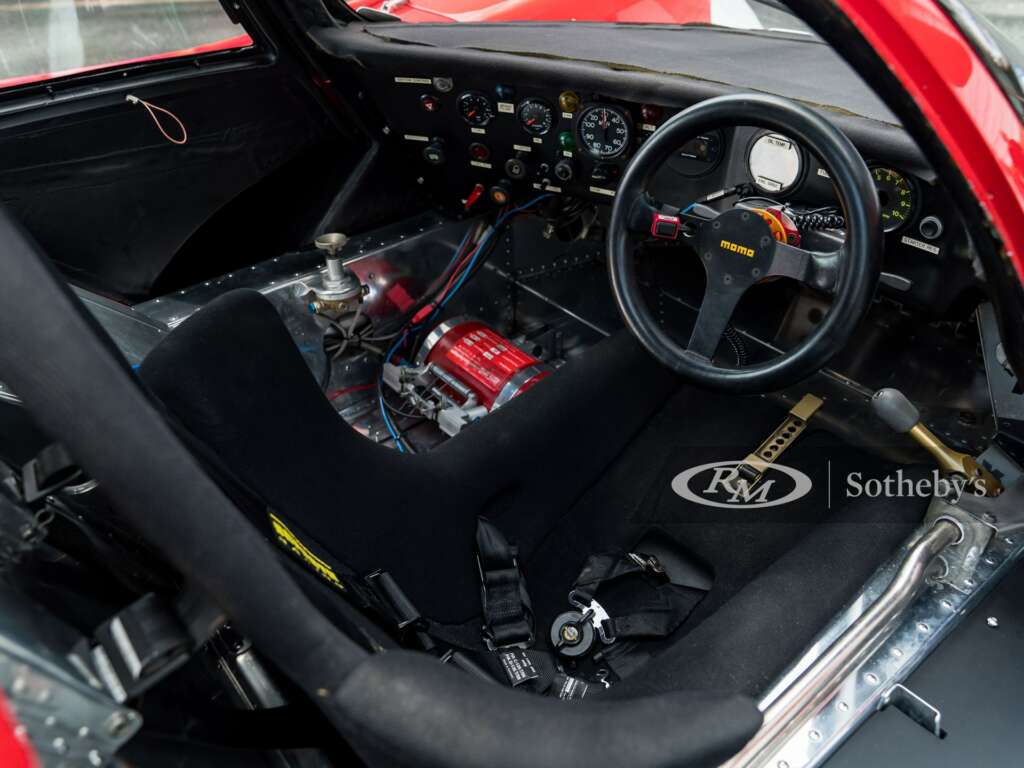