In early 1954, Ferry Porsche sat down with his company’s New York distributor, the entrepreneurial Max Hoffman, to discuss ways to sell more cars in what would become firm’s most vital market, the United States. Porsche agreed to produce a bare-bones, low-cost sports car to compete with the British and Italian makes that were proving so popular with American customers.

The fledgling German automaker had some hurried decisions to make. With its contracted body manufacturer Reutter lacking the proper stamping dies in place to produce what Hoffman dubbed the “Speedster,” Porsche used what it had available as a starting point: 356 Cabriolet body shells. All of the first 200 Speedsters built in 1954 were based on Cabriolets whose windshield posts were simply cut off. Many of them also retained the mounting points on the rear quarter wheel housings for the Cabriolet’s folding canvas top.

When the new year arrived, those issues had been resolved, and Reutter began manufacturing 356 Speedster bodies in earnest. Carrying a base price of $2,995, the Speedster proved a hit in the showroom, especially in warmer climes. A typical Hoffman ad of the day proclaimed: “Years ahead in engineering, Miles ahead on the road.” Speedsters proved so popular in amateur racing, both with pushrod and the ferocious Carrera four-cam engines, that entire grids would often be filled with these diminutive warriors.

We are pleased to offer here the 61st of those first 200 Speedsters built in 1954, factory-equipped with a 1.5-liter Type 528 Super roller-bearing engine, four-speed manual transmission, and four-wheel drum brakes. According to its included Kardex, this car was completed on 11 November 1954 and shipped to Hoffman in New York. It left the factory wearing Signal Red paint with a black leatherette interior.

The Speedster was acquired by its current owner in August of 2018, having been smitten with the car after he spotted it on display at Luftgekühlt. He purchased it from a well-respected Southern California collector who had commissioned a no- expense-spared-restoration circa 2016-2017 by European Collectables of Costa Mesa, California.

The car retains its numbers-matching engine and transmission. The 1500 Super engine utilized roller bearings on both its crankshaft and connecting rods. It developed 70 DIN horsepower, or 82 SAE horsepower, at 5,000 rpm on a pair of Solex 40 PICB single-throat carburetors. This gave the little roadster a top speed of almost 110 mph, a very impressive figure for its day.

During its restoration, it was re-finished in the model-and-year-correct color scheme of 602 Speedster/Sky Blue with a light tan interior. The individual ventilated deep bucket seats are covered in period-correct Acela Bast leatherette with blue piping. The carpeting—including the back of the seats—is tan square-weave, all capped with a tan canvas top and side curtains with plastic windows. Correct rubber floormats are underfoot. The dashboard of this lovely Speedster contains a VDO speedometer, an optional VDO tachometer with a “red line” zone beginning at 4,500 rpm, and a Störk engine oil temperature gauge that used a capillary tube.

The crowning touch is a set four (plus a spare) extremely rare 3.5-by-16-inch Kronprinz steel disc wheels on Rudge knock-off hubs that were added by a previous owner at great expense. These wheels are properly date-stamped “8-54.” Emerging from beneath the rear valance is a four-pipe Abarth-style exhaust. The odometer currently displays 14,068 miles at the time of cataloguing, but the total mileage is unknown.

Included with this delightful 1955 356 Speedster are a Kardex copy, four factory-correct date-coded wheels, as well as a tonneau cover. 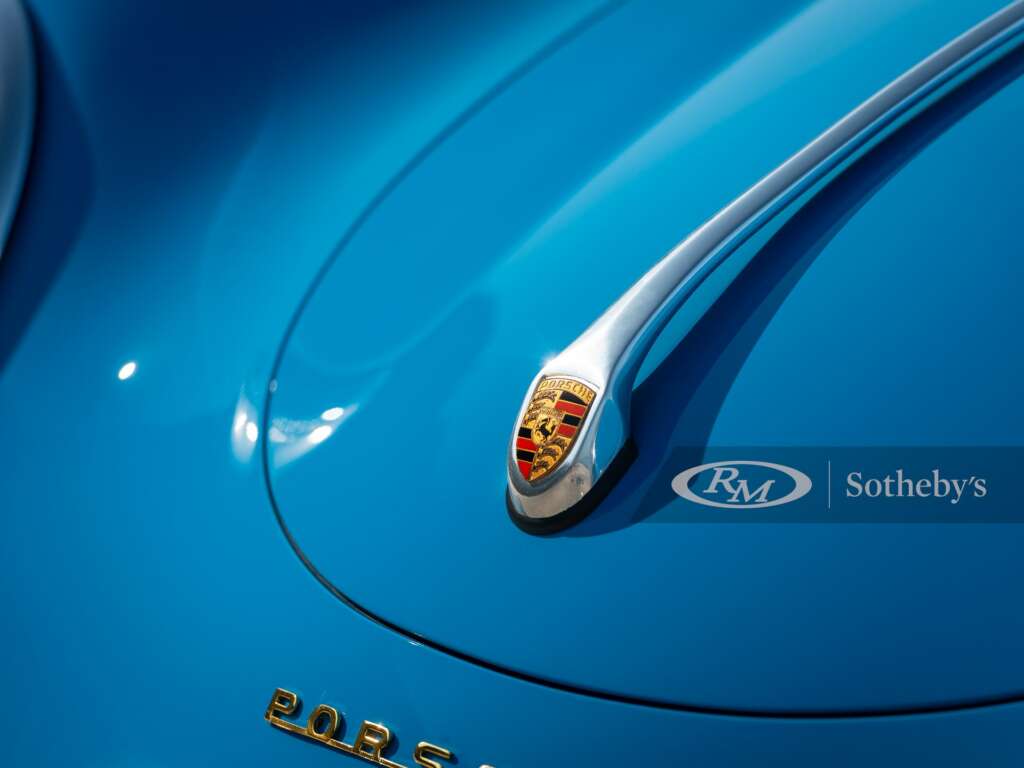