The vehicle shown here was delivered to the United States of America in 1953. The color combination at the time was azure blue with a gray leather interior, as the Porsche certificate that we have at hand says. The owner history of the vehicle is lost until the early 1990s. However, contemporary photos show that the car is still in its original condition at the beginning of the 1990s, although the ravages of time have left their mark on this vehicle. At this point, Mr. Paul Wesselink, who had his own paint shop, decided to take care of the Porsche and restore it. 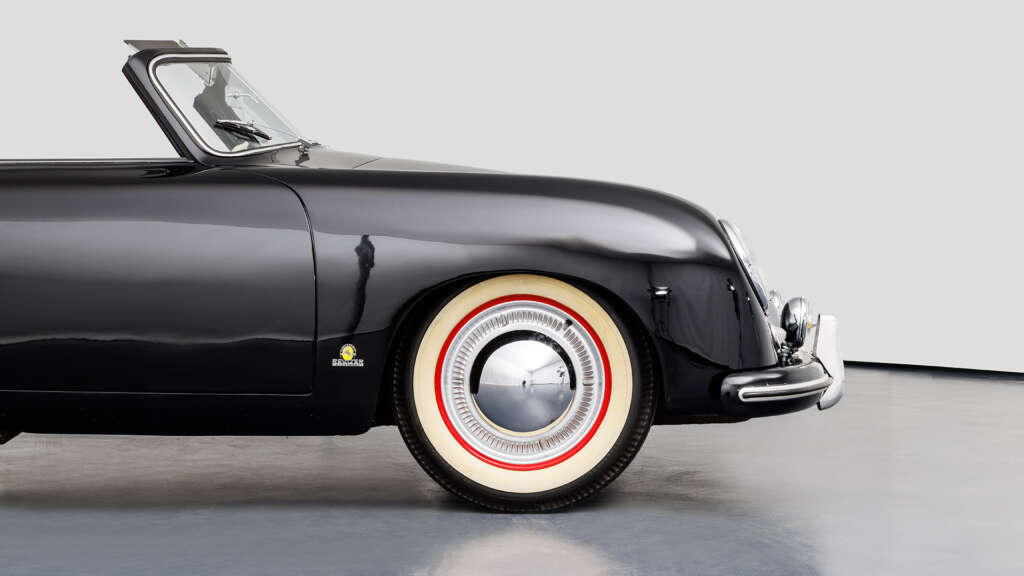 But while the restoration work was still in full swing, he sold the car to Mr. Todd Michael Madeiros, a resident of Los Gatos, California. This completed the restoration that had begun. In 2004, Mr. Madeiros parted with his Porsche 356 and sold it to Melbourne, Australia. The new owner, Mr. Trevor Keeley, decided to further revise the car both visually and technically. We still have all the invoices and written histories today. The 356 remained in the same ownership for the next 11 years. In 2015, just prior to the sale to Dutton Garage in Melbourne, Mr Keeley arranged for the engine to be overhauled. The original engine is still in the vehicle. In 2016, our collection management became aware of the car and bought it. The vehicle spent the following years in our in-house collection before the decision was made to release the vehicle for sale. We hand over this vehicle to its new owner with a fresh service and new MOT. If you have any detailed questions, please do not hesitate to contact our sales staff at any time!

The first sports car developed and produced by Porsche, which was marketed under the Porsche name, was already a sensation at the time. Right from the start of production, the car could be purchased as a coupe or convertible. The first Porsche 356 can be recognized by the two-piece windscreen made of tempered glass with a center bar, from model year 1952 a one-piece pane was installed, albeit with a crease in the middle. The car had a continuous bench seat for the driver and front passenger as standard, with individual seats available as an option. The Porsche 356 was built from 1948 to 1955 as a coupe and cabriolet with four engine versions. The first mass-produced car left the plant in Stuttgart on Maundy Thursday, April 6, 1950. Striking features were, for example, the split windscreen or the fixed rear window. These could be opened in later years of construction. There was a red tip on the radio antenna, called a "red tipper". A Porsche crest was not found, at least in the 356s of the first years of construction, since it was only designed in 1952/53. That's why Porsche stood at the bow and stern. The first vehicles had a white Petri Bakelite three-spoke steering wheel with a horn ring, which was replaced in the 356 A by a two-spoke design. The ignition lock was located to the left of the steering wheel, at that time still connected to a start button. The fuel level could only be checked with a notched wooden stick held vertically in the fuel tank, as there was no fuel gauge. Nitro paint was used to paint the vehicles. The Porsche 356 1500 Super was the most powerful 356 of the "Pre-A" series. The power is increased to 70 hp by a higher compression and other carburetors. Also due to the good aerodynamics, the 1500 Super is over 175 km/h fast. The 356 models of the 1953 model year received larger brake drums and a synchronized transmission, the patented Porsche synchronization. A two-stage windscreen wiper system is available as an option. The Porsche crest is now embedded on the horn button of the two-spoke steering wheel. The price for the coupé was 13,800 DM and for the cabriolet 15,800 DM. Only 1,593 cabriolets of the 1500 Super variant were ever to be built. 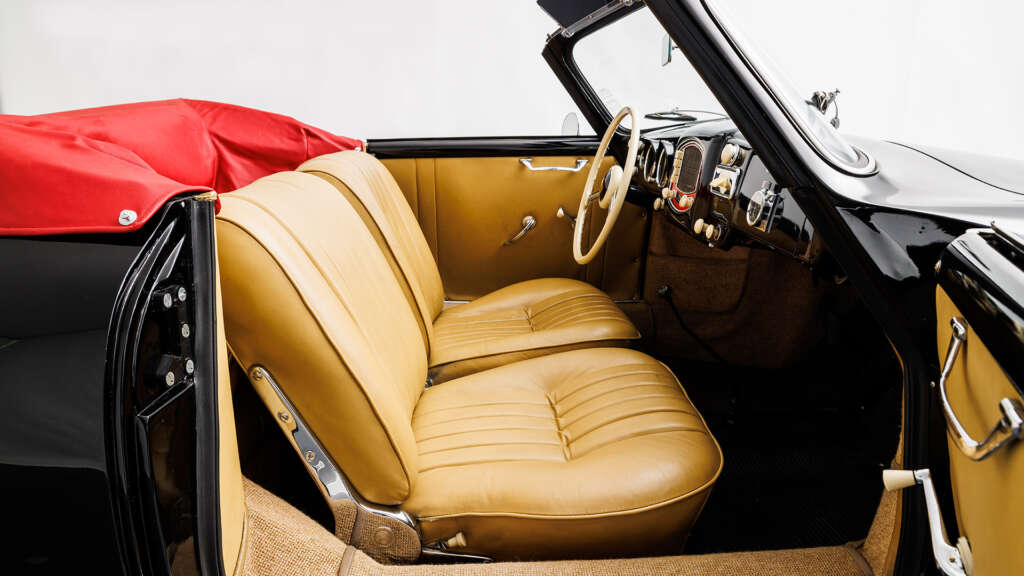 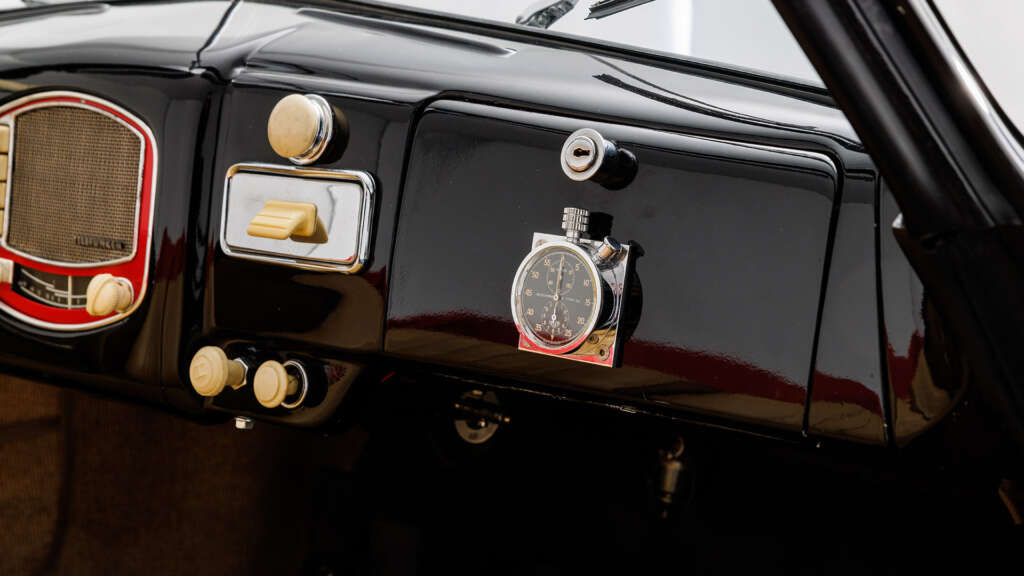 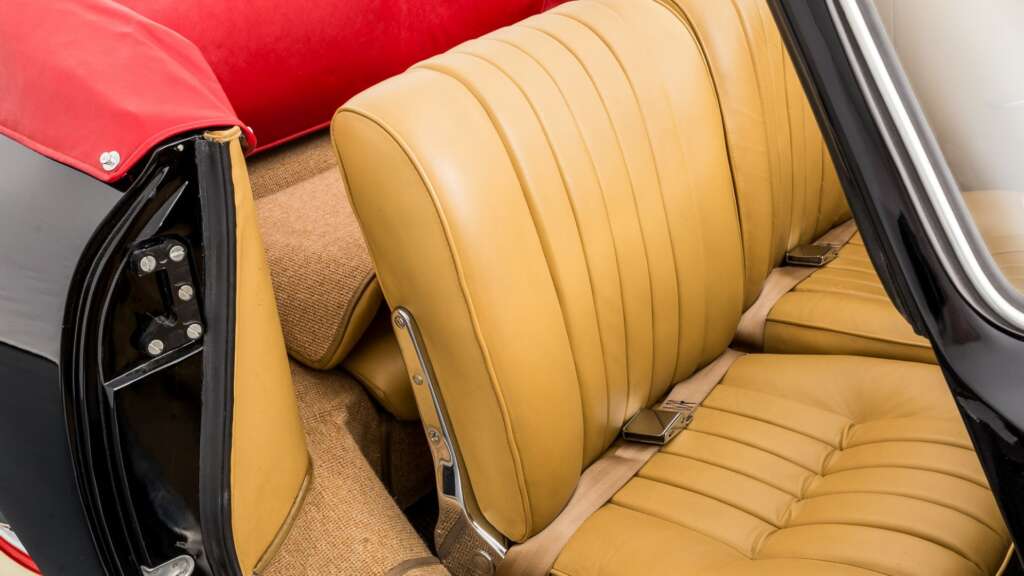 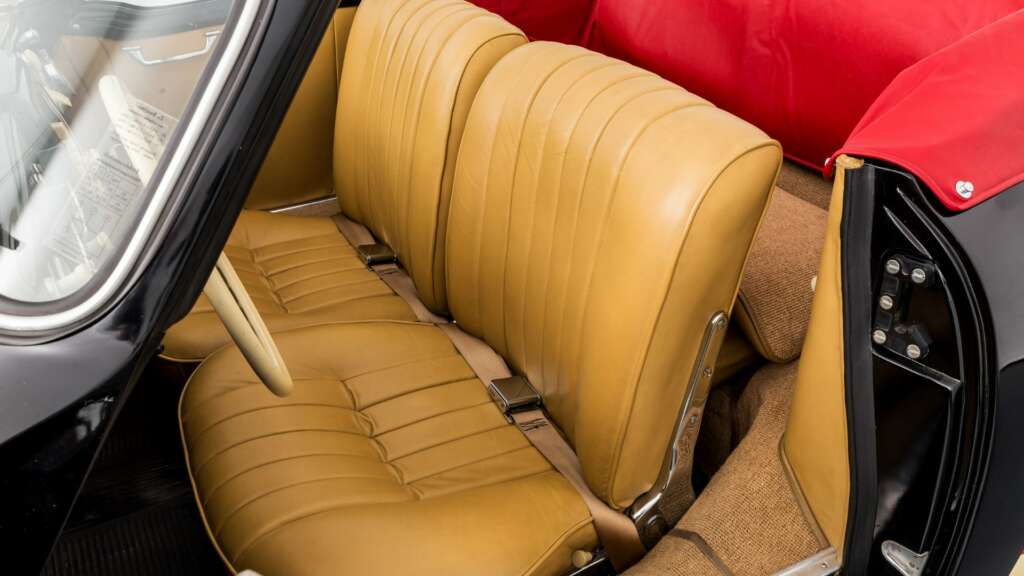