In 1974, Porsche's long-running 911 was fundamentally revised. For the first time, each year of construction was marked with a letter, starting in 1974 with the "G". Each additional year was named with the following letter, the "I" was not awarded. Nevertheless, the suffix “G-Series” is used for all of these years of construction. There was more to the car itself. The most noticeable change were the bumpers, which now took account of the US market and its regulations. In addition, the number of versions was reduced, it was only available as the 911, 911S and 911 Carrera. And they all got the 2.7-liter engine, which, however, had a different power output in the different versions. The so-called MFI variant is a very special one, as this Porsche draws 210 hp from the magnesium engine that was also used in the 2.7 RS Ducktail.

Our range, whose full name is “Porsche 911 2.7 RS MFI Targa”, comes from the 1974 model year, so it is a real G-model. The cult Swabian with VIN 9115610039 was first registered for traffic on September 1, 1974. In Germany, so it's not an import Porsche. The Zuffenhausen sports car had three or four owners, it is only known that a lady of British descent was one of the owners for a long time. The scope of delivery includes a set of keys, the TÜV badge is still valid until October 2022. The classic has also successfully overcome the hurdle of §23 StVZO to obtain the H license plate. Documentation is available that consists of invoices, TÜV reports and other documents and which make the mileage partially traceable, the existing matching numbers provide information about the originality. There is also an expert opinion. The current owner can exclude accidental damage for his period of ownership. There are no external defects or changes to complain about in the car. This is also proven by the numerous pictures. This 11 Series is a Porsche for all of you crazy people and collectors. One of only 187 built in 1974 in the Targa version, in an absolute eye-catcher color.

In the course of the restoration work, the Porsche also got a completely new paint job, in the original light yellow (manufacturer color code B6V9). There are no external defects or changes to complain about in the car. This is also proven by the numerous pictures.

The yellow bullet rolls on the legendary Fuchs rims, on which good tires are mounted. Brakes as good as new and a very good underbody are also on the plus side of the Zuffenhausen racing car. As already mentioned, the car has already been completely restored, how should it be otherwise? Therefore, there are no defects or modifications to the chassis, brakes or tires.

The interior is also at its best. Even the former give a well-groomed impression. Just like the partially leather-covered interior and the carpets. Nothing is damaged that goes wrong. Here, too, the pictures speak a clear language.

The instruments all work, the engine has a mileage of 55,356 kilometers. In addition to a folding roof, a contemporary cassette radio is also part of the equipment.

This Porsche is an extremely rare representative of its kind. It is the Carrera model in the Targa version, which delivers 210 hp from its 2.7 liter displacement. This engine was used, among other things, in the ducktail Porsche 2.7 RS, which is why the engine is well known. Only 610 copies of this version were made, as Targa in 1974 only 187, an absolute rarity. The four-speed manual gearbox ensures a brisk forward thrust. A large maintenance service was carried out, there are no defects in the technology. So if you want something rare, beautiful and fast at the same time, you cannot ignore this cult car.

The description of this auction is correct and not misleading to the best of the seller's knowledge and belief. Kickdown asks all salespeople for a number of details about the vehicle and does some inspection. However, the bidder must convince himself that the description is correct and do all necessary research before submitting a bid. Please read our terms and conditions for more details. 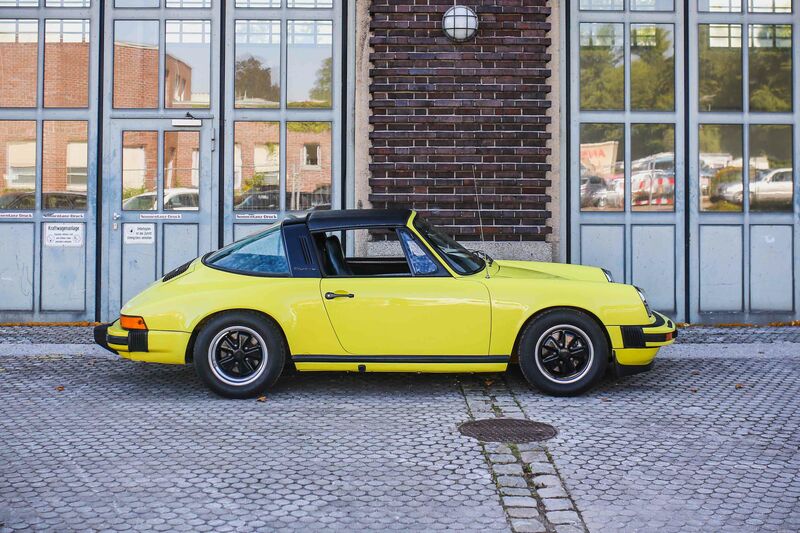