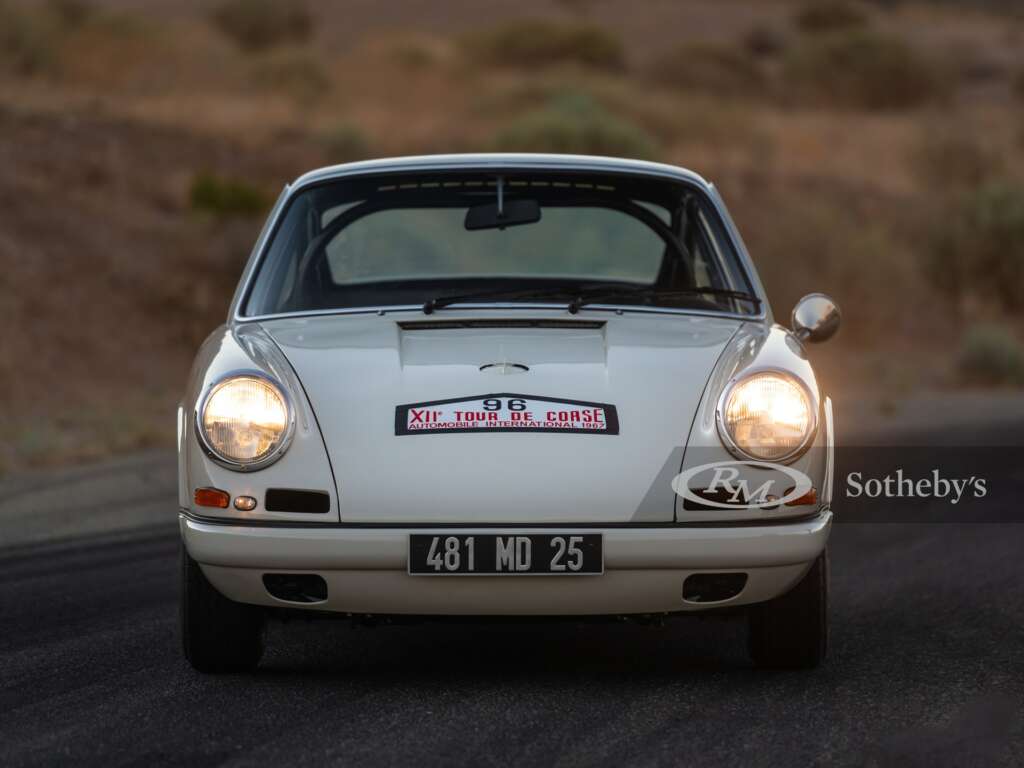 Porsche rarely, if ever, follows any other automaker’s lead, but Colin Chapman’s maxim of “add lightness” was taken to heart by Zuffenhausen’s early racing director Ferdinand Piëch. He tasked his engineers with shaving as much weight as possible from the 1967 911 S coupe with the goal of competing in the FIA’s GT 2.0 category. The resulting 911R proved a brilliant racing and rally machine.

While the 911’s steel unibody was retained, all the removable panels were replaced by fiberglass, with the exception of R3, which used aluminum doors and lids. The standard side and rear glass was replaced with plastic, and new lightweight fiberglass front fenders and rear turn signal housings were created and fitted with small NSU and VW lamps. Deep Scheel racing seats and other special pieces from Porsche’s racing department replaced standard 911 S fare, and the interior was otherwise gutted. Just as importantly, the stock 160-brake horsepower 911 S engine was replaced with the 210-brake horsepower Type 901/22 flat-six racing engine from the 906. Some of those engines were magnesium-cased, while the others were made of heavier aluminum. The Fuchs wheels on the 20 cars were “Deep Sixes” in front, and “Seven Rs” in the rear, with the fenders widened to clear. 18 of cars were finished in Light Ivory with minimal black lightweight interiors and black rocker stripes, and two examples were painted to customer order.

At day’s end, the car’s curb weight was reduced to less than 1,800 pounds dry. However, when Porsche tried to convince the FIA that the new R was merely a variation on the 911 S, the sanctioning body refused to bite; homologation was refused, and Rs were forced to run as Prototypes. Most were eventually sold off to privateers, with eight of the 20 “production” cars going to France.

This fine example,11899006R, left the factory on 26 October 1967, bound for Porsche Sonauto France in Paris, and thence to its first owner, Fernand Schigler. Schigler was already an accomplished rallyist, competing in Renaults and Peugeots with some success. Just four days after licensing his new Porsche on 30 October 1967, Schigler had installed a quartet of driving lamps and entered the 1967 Tour de Corse as No. 96 with Gérard Couzian as his co-driver. Schigler also entered the Criterium des Cevennes. In 1968, Schigler entered five rallies: the Lyon-Charbonnières–Stuttgart Solitude, the Ballon d’Alsace, the Course de Côte de Fribourg, the Rally Lorraine—where he placed fourth overall—and the Course de Côte de Vuillafans.

In January of 1969, Schigler sold his 911 R to Michel Martinach, who ran the Rallye Route du Nord. At the Rallye de Rouen, Martinache damaged the car in practice. Martinach then appears to have sold the engine and transmission to Gerard Darton Merlin, a.k.a. “Gedehem,” as spares for two other 911 Rs that Merlin owned. The chassis was sold to Marcel Balsa of Paris, who rebuilt it and installed a 2.3-liter ST engine. Around 1971, Balsa sold the car to Thierry Sabine, who used it for rally reconnaissance. Around 1980, Sabine, later to achieve fame as founder of the Paris-Dakar Rally, sold 006R to Bertrand Lenoir of Paris, who installed a 2.0 engine from a 911 T.

A METICULOUS AND AUTHENTIC RESTORATION

In the mid-1980s, 006’s life began to change when it was acquired by a Mr. Noirot of La Châtre, who promptly disassembled the car and began a restoration. In mid-course, as in so many such instances, the uncompleted project was sold in 2002 to a European collector. The restoration continued intermittently until 2006, when the unfinished car was placed into storage. In 2014, it was discovered by Belgian Porsche lightweight restorer and dealer Kobus Cantraine.

Cantraine purchased the project after testing the trunk floor and lower dashboard sheet metal with a magnetic resonance scanner to ensure that the metal was original, and that the chassis number stamps un-tampered with. In late 2015, Cantraine, assisted by some of the best Porsche specialists in Belgium, completed the restoration, installing a factory original half roll-cage and a Monza three-spoke leather and alloy steering wheel. The car’s correct factory 10,000-rpm racing tach and 911 R-specific ignition kill switches and fuel reserve lights remain. A pair of NOS Heuer Monte Carlo stopwatches was fitted onto the dashboard.

Finally, the car was finished in its correct 1967 Tour de Corse livery. The original No. 97 hood sticker from the Elford/Stone car was borrowed from a collector of Tour de Corse memorabilia and meticulously recreated by a graphic designer incorporating Schigler’s No. 96. Also duplicated were the “Rally des 10.000 Virages” door stickers used on cars in the 1967 Tour de Corse. In fanatical attention to detail, the reproduction number on the driver’s door was also attached with black tape, with the lower strip misaligned, as it appears in period photos. While NOS parts were used during the restoration when possible and as-needed, the original plastic windows, yellowed by age but impossible to reproduce to a suitable degree of authenticity, remained in place.

The original matching-numbers 901/22 magnesium-cased engine, number 508005, had also been well cared-for after its 1969 sale. Merlin kept the engine until 1973, when it passed to well-known Porsche racing team owner and driver Raymond Touroul in Paris. Next, a very private Porsche collector of Compiegne, France owned this engine until mid-2015, when Cantraine purchased it for reunification with its original chassis. This engine, with its correct magnesium intake manifolds and chain covers, dual ignition, and Weber 46IDA3 carburetors, was fully rebuilt by Gustav Niche in Stuttgart, and reportedly dynoed at 216 brake horsepower at 7,650 rpm. The driving experience is unique; the power-to-weight ratio is something that cannot be compared to any other 911.

Today, 911 Rs are the most highly sought-after 911 variant and the pinnacle of many important Porsche collections, rarely changing hands. Making this exquisitely detailed example even more desirable, it is one of very few still fitted with its numbers-matching engine. Comprehensively restored by marque and model experts, it is supplied with a large folio of period rallying photographs and documentation, and it is eligible for many of the most important rallies around the world. 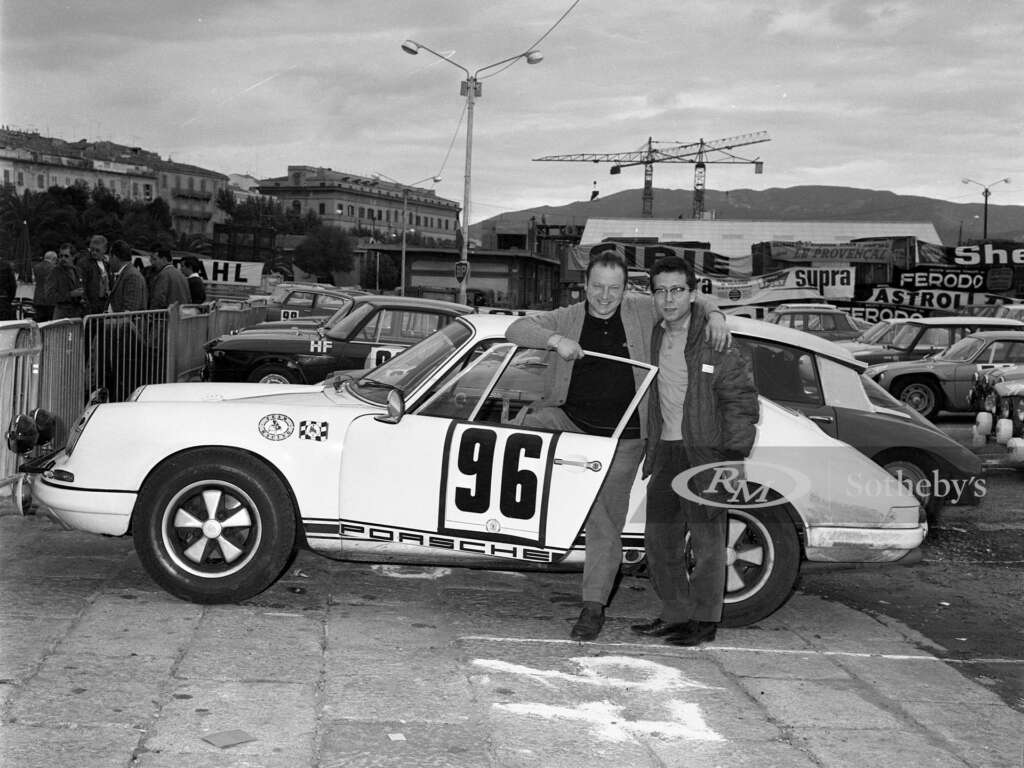 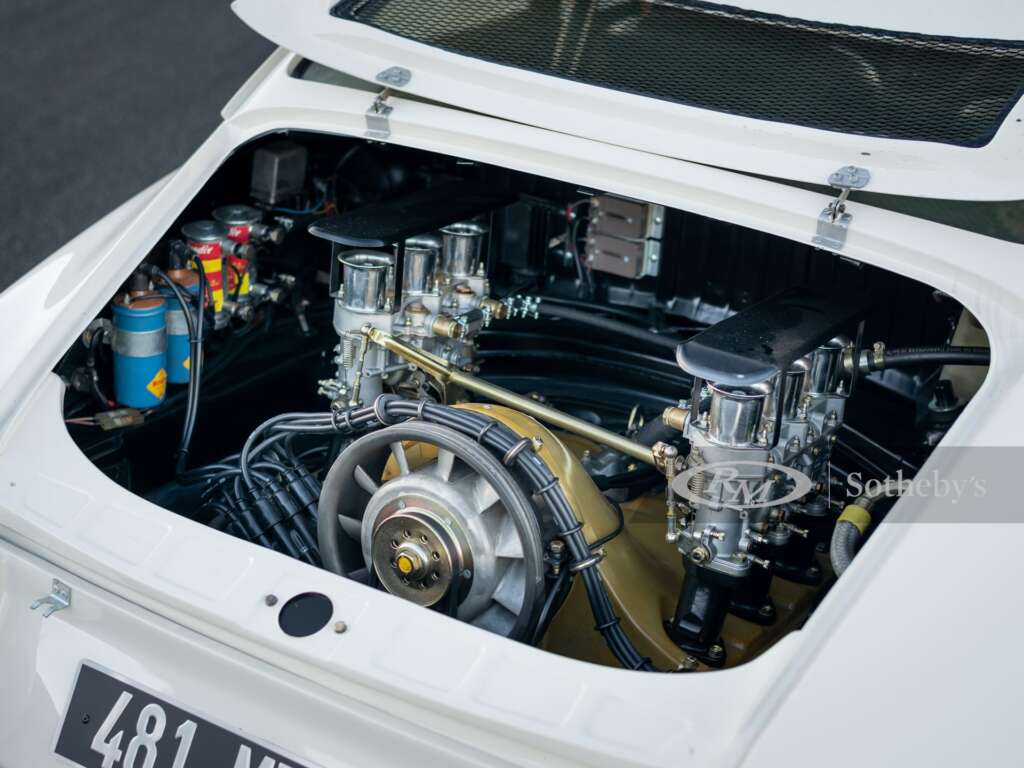