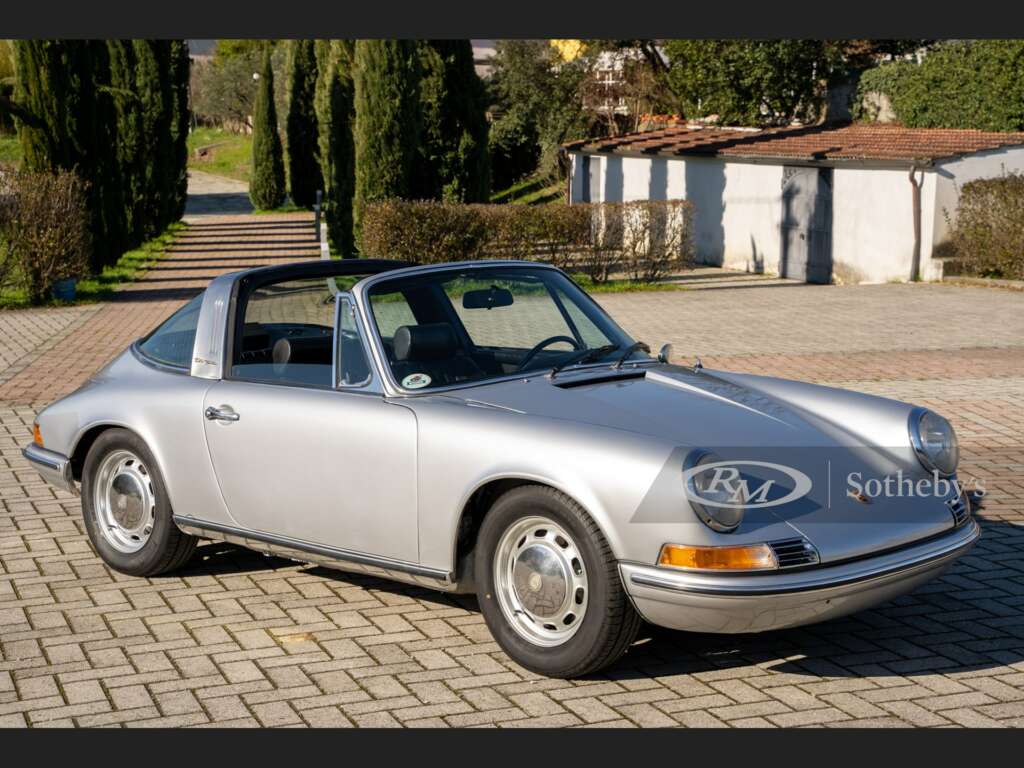 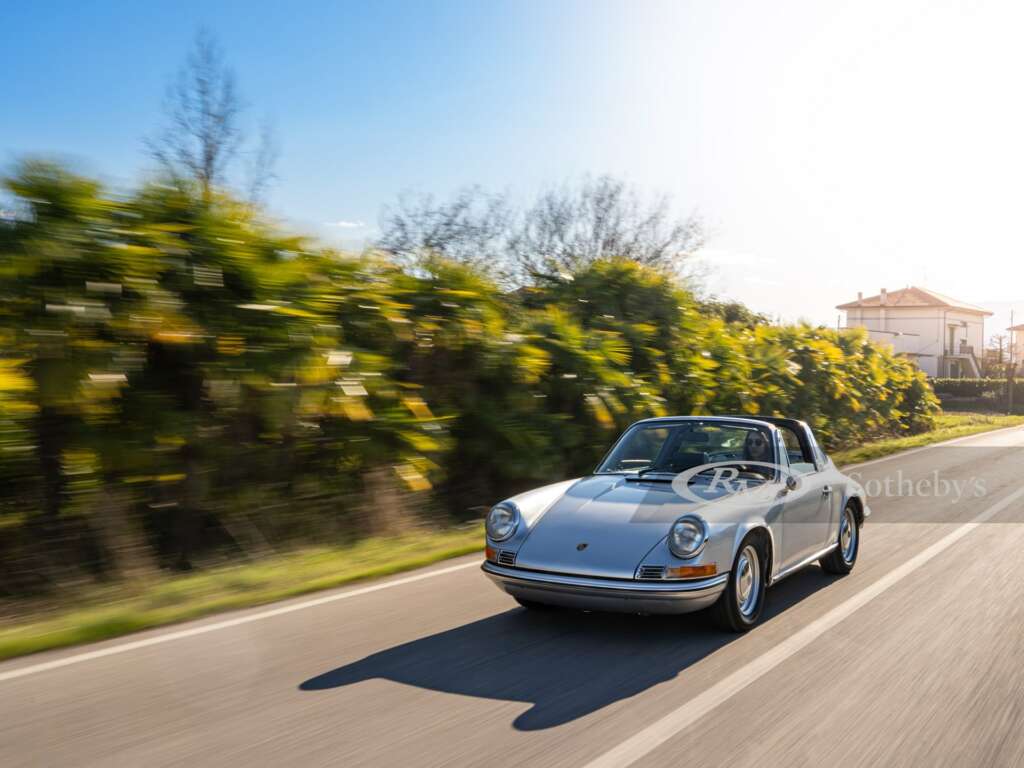 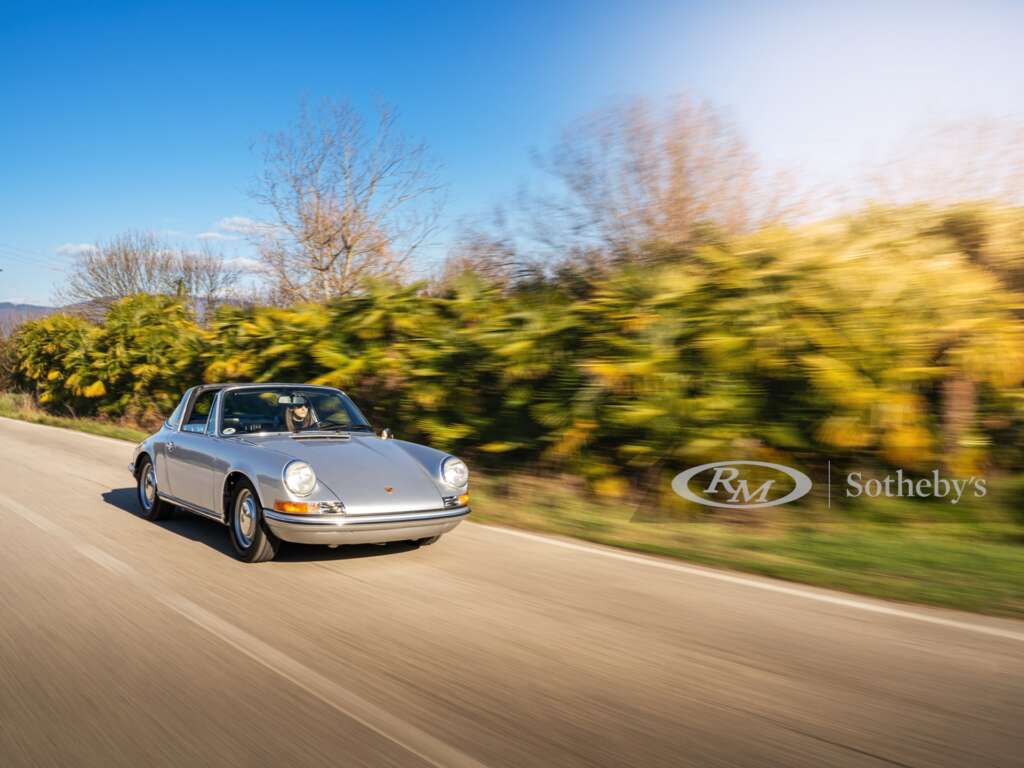 Please note that this lot will need to be collected from Sant’Agata, Bolognese, Italy

In 1969, Porsche instituted a series of changes to their 911 and 912 models which greatly improved drivability: Wheelbases were lengthened by 2.4 inches, and flared fenders accommodated wider wheels and tires. For the 1970 and 1971 C- and D-series, engine displacement was increased to 2.2 liters across the range, which now included the base model 911 T, the last 911 to carry carburetors.

This US-market Silver Metallic 8010 over black leatherette 911 T Targa was completed at Zuffenhausen in June 1971. It was specified with front and rear sway bars, tinted glass, light alloy wheels, and the “comfort” package, which added aluminum door sills, velour carpets, gold-colored badging, and additional rubber on the car’s bumpers.

The car’s first owner of record is found in Columbus, Ohio in 1975. Its 2.2-liter engine reportedly experienced a spun bearing sometime shortly thereafter, and the car was held in storage until 2006, when it was acquired, and the engine diagnosed and rebuilt by Byers Imports of Columbus. The car later sold locally, reportedly with a full restoration planned. However, it remained largely untouched until acquisition by the consignor in early 2018.
This very late D-series Targa was subsequently imported Italy, where work promptly began to return it to its former glory after 32 years of nearly uninterrupted dormancy. The effects of long-term storage were corrected with new front and rear bumpers, rocker panels, front suspension pan, rear crossmember skin, and other minor panels replaced as needed. The body received a complete respray in its factory-original Silver Metallic paint and a new tinted windshield, and many perishable seals and gaskets were replaced throughout.
The electrical, brake, and suspension systems were completely overhauled, with parts replaced as necessary. Many original parts were retained, restored, and rebuilt, where permitted by condition. The 2.2-liter engine, numbers-matching per the accompanying Porsche Production Specifications certificate, and correct-type gearbox were bench-tested after receiving new gaskets and reinstalled after the fitment of a set of Inox heat exchangers and new exhaust system.
Most of the black leatherette interior is believed to be original and was treated to a gentle conditioning. A new set of velour carpeting and door pockets were acquired to complete the interior cosmetics. The exterior trim was similarly treated to a similar program of replating, or replacement when necessary.
As one of just 1,523 D-series T Targas produced only for the 1971 model year, this rare and recently restored example in desirable factory-correct colors is a fully sorted and supremely attractive offering. It is accompanied by a Porsche Production Specifications certificate, owner’s manual, service booklet, “basketweave” tool roll, service invoices, and a photo album documenting its 2018 restoration. 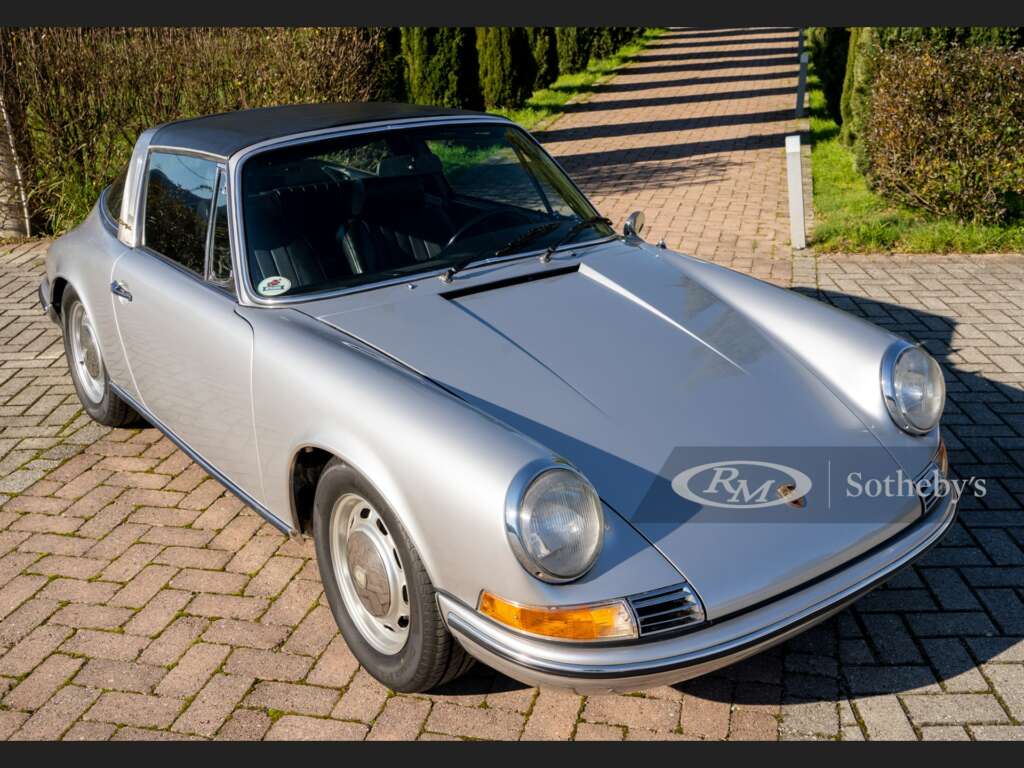 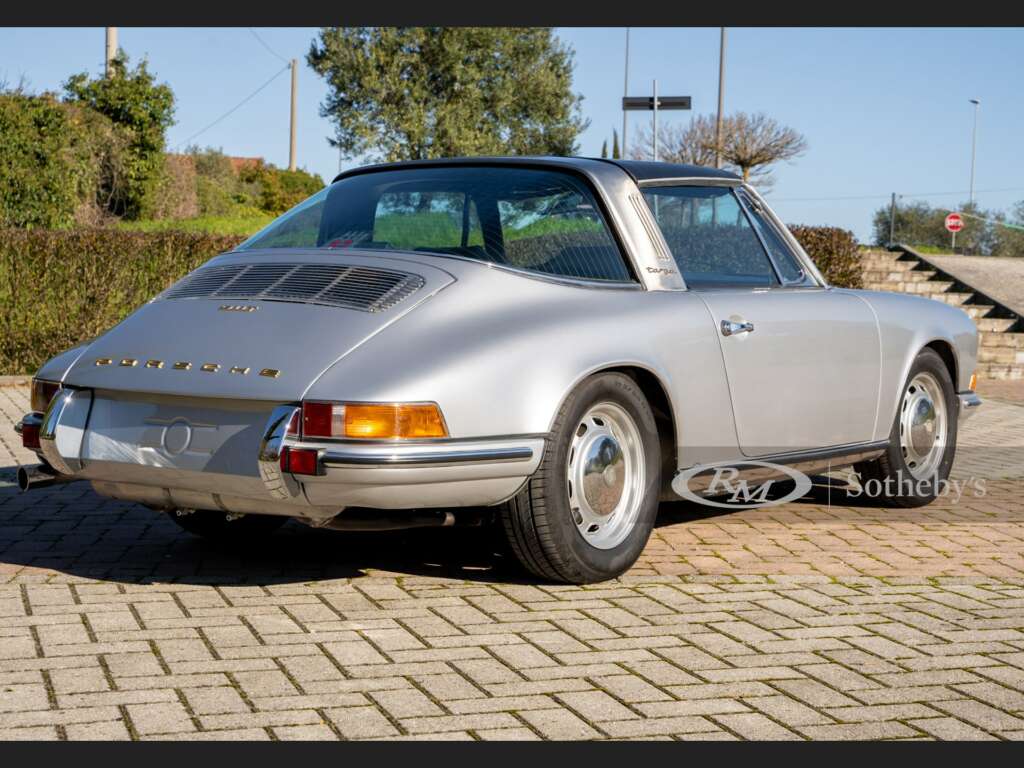 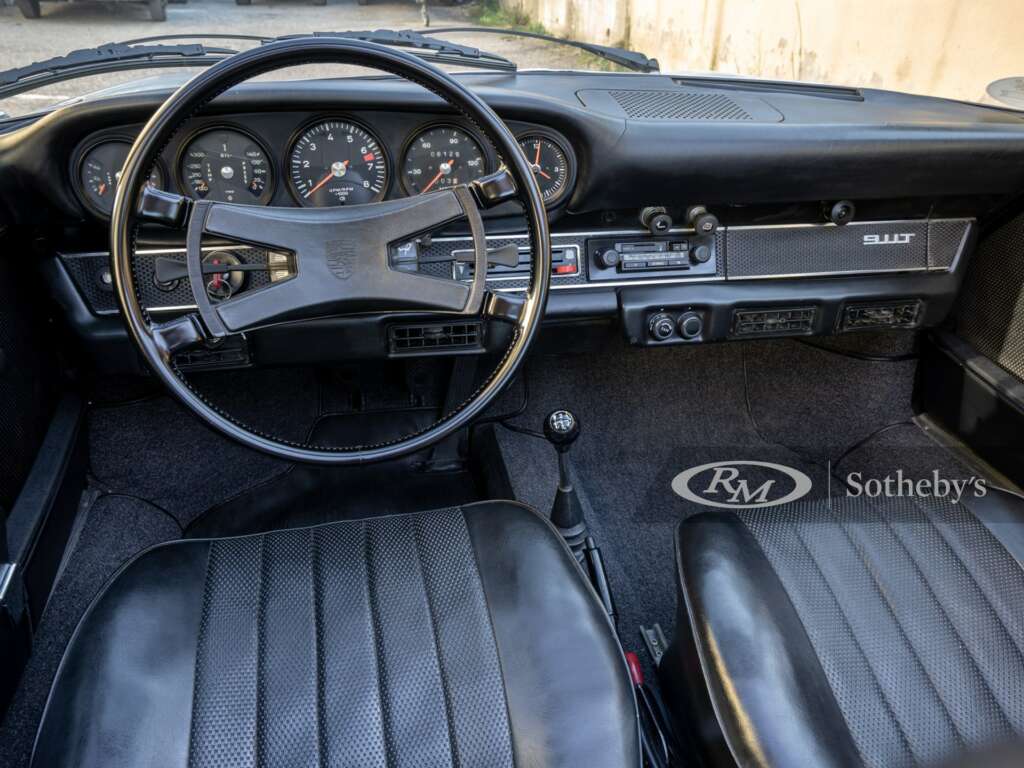 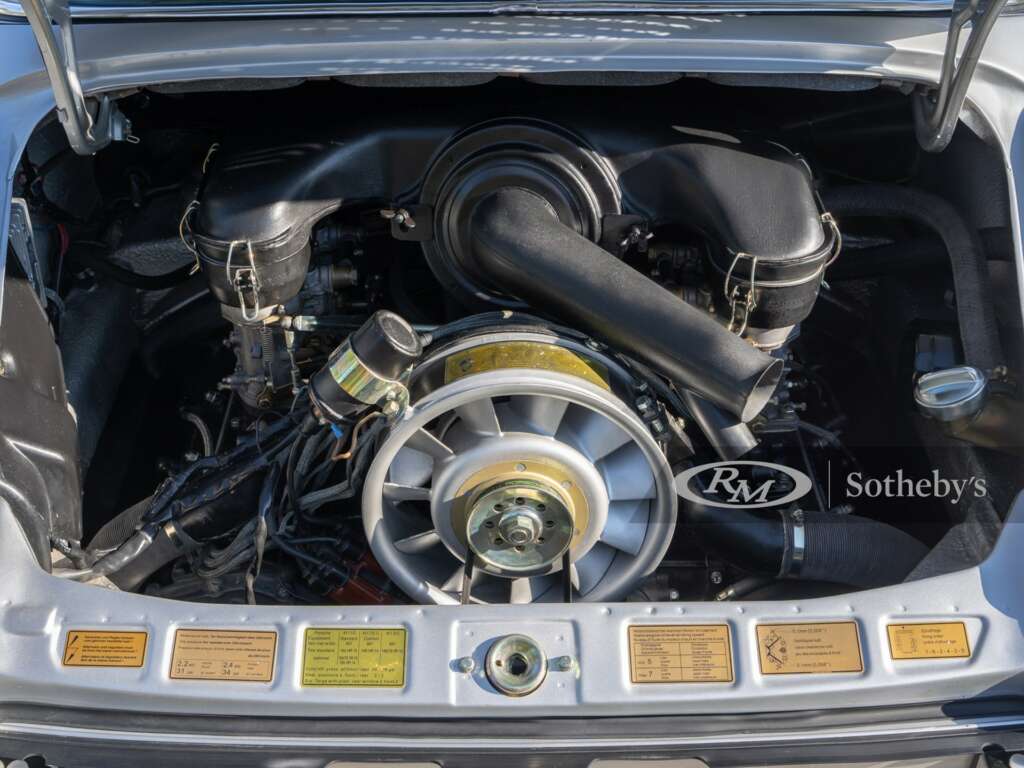