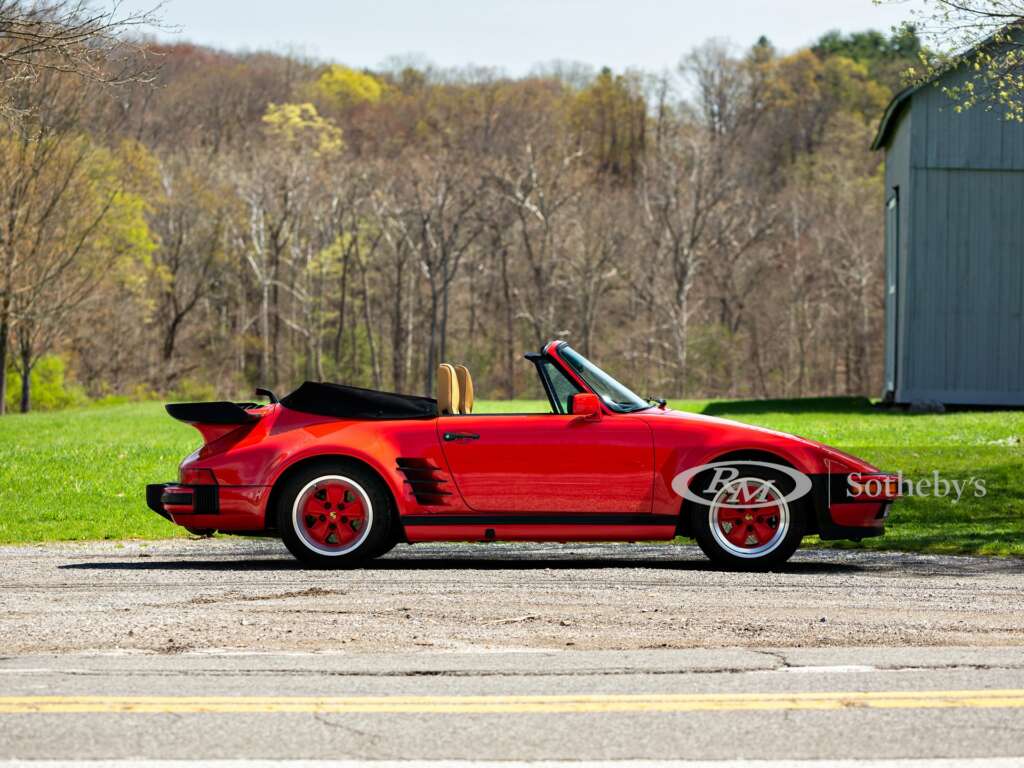 Rakish and powerful, this stunning 911 Turbo Cabriolet carries the additional cachet of being a factory-built “S” version, wearing the factory-built Flat-Nose, or Flachbau, body package that became available in March of 1987.
Porsche was forced to withdraw its Type 930 Turbos from the North American market in 1979, as it could not meet stringent exhaust emissions standards. Following the development of new electronic engine management, the Turbo returned to the US in 1984. The year before, a wealthy Turbo-owning client had asked the factory to create a street-legal version of the world-beating Type 935 racing car that featured a lowered, more aerodynamic nose, and it fell to Porsche’s “Special Wishes Department”—now known as “Porsche Exclusive”—to fulfill that dream. Variations of that bodywork began to appear on the aftermarket, proving so popular that Porsche decided to produce a limited number of its own high-quality examples.

The North American Flat-Nose package, Option 505, comprised a new steel front hood with retracting headlamps, louvered steel front fenders, boxed rockers, widened rear quarter panels with vents and horizontal strakes, a new front fascia with auxiliary lighting and an extra oil radiator, and a large rear spoiler covering the engine’s intercooler. It was a very costly option, bearing a price tag of more than $23,000.
This car was among 591 Coupes and Cabriolet examples delivered to North America for the 1988 model year. Factory-finished in Guards Red over supple Champagne leather, it was optioned with a power top; limited-slip differential; heated and 12-way-adjustable front seats seats with lumbar support; a raised-hub steering wheel with painted center crest; a Blaupunkt Reno stereo and multi-speaker package; and security system. Like all Turbos, this example has a full climate control system, headlamp washers, and other niceties. The centers of the Fuchs forged alloy wheels are painted to match the body color.
Completed in late January, 1988, it was delivered to Valley Imports in Fargo, North Dakota two months later and sold to its first registered owner, a noted Porsche enthusiast. It was then sold to another collector in Ohio, and Wisconsin registrations are recorded from 1994 through 2013. Sold in Florida in 2015, then displaying just 2,401 miles, it has been registered in that state ever since. In November 2019, it received a service to change engine and gearbox oil, flus the brake system, replace the battery, and install a new fuel sending unit.
Thirty-three years after leaving the factory, this scrupulously maintained Turbo Flat-Nose Cabriolet remains in pristine condition, showing fewer than 2,700 miles and retaining its factory equipment, manuals, warranty book, sales documentation, collapsible spare, tools and jack, and Porsche Certificate of Authenticity. It is surely among the very finest examples of this rare model in existence. 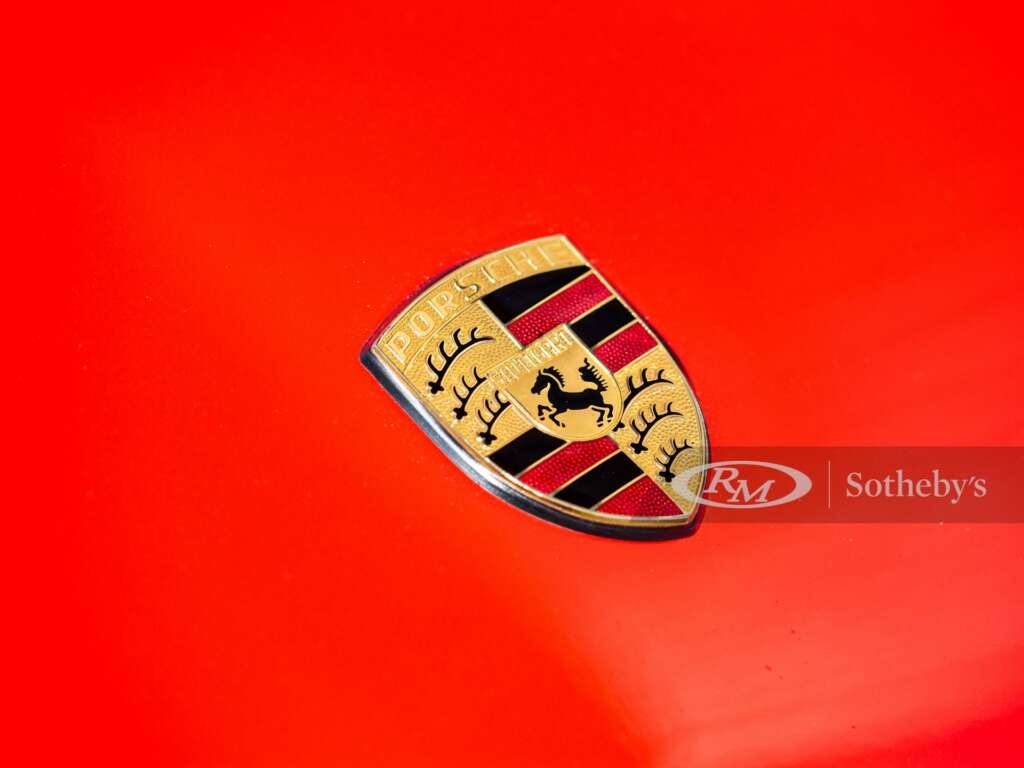 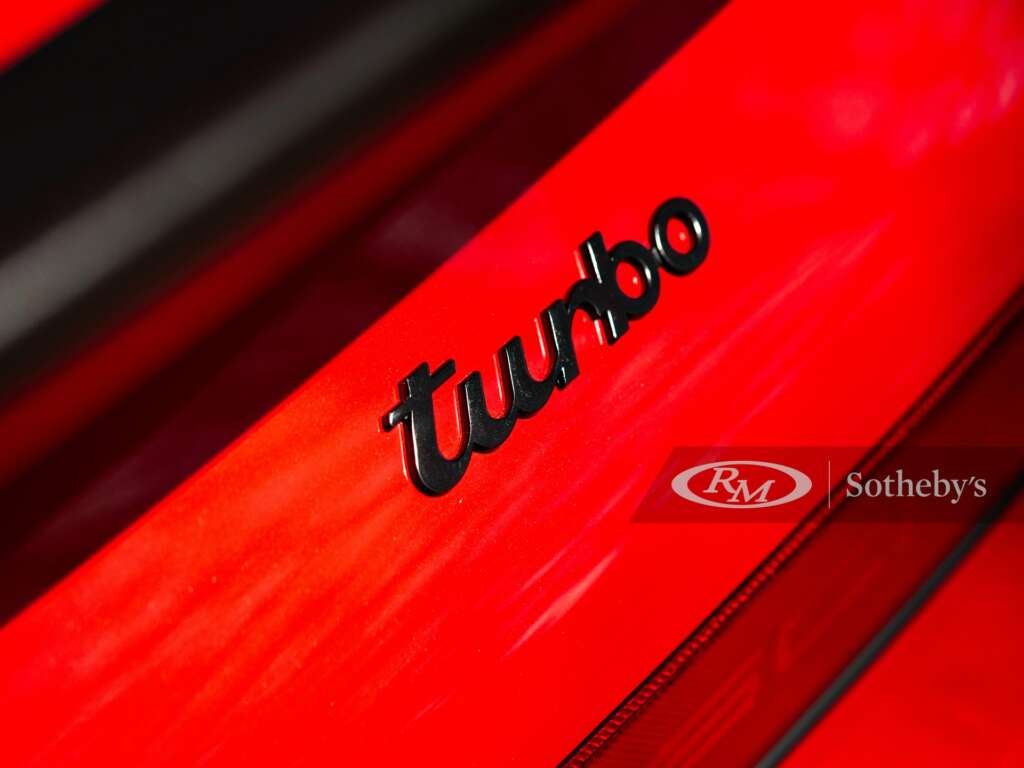