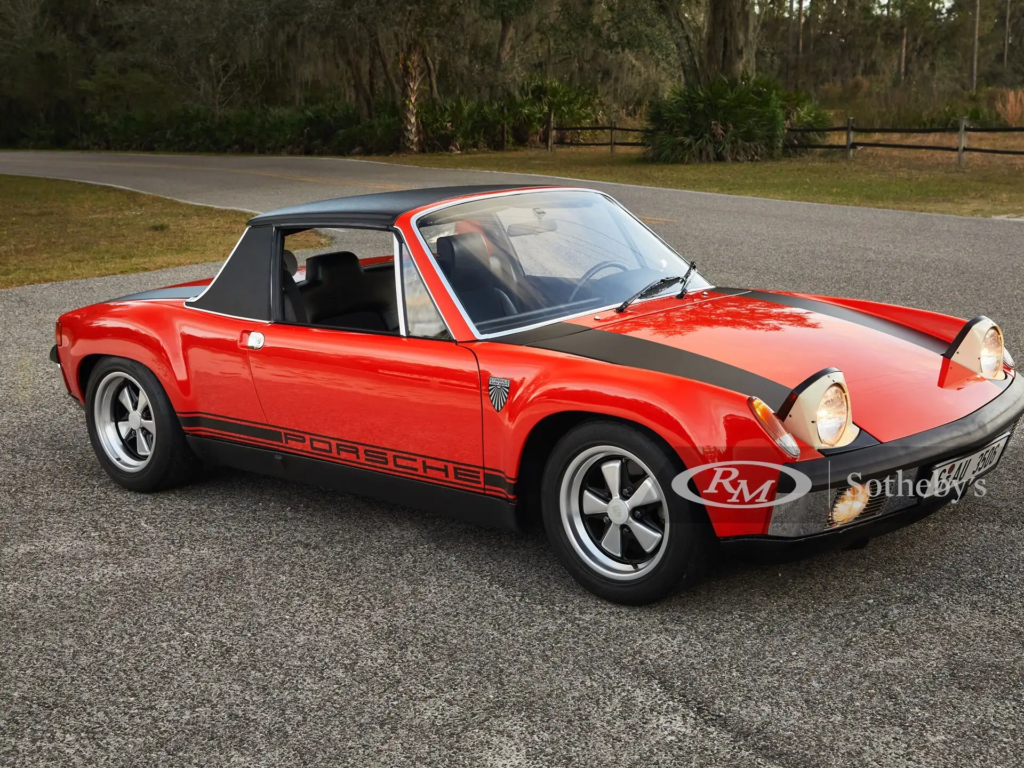 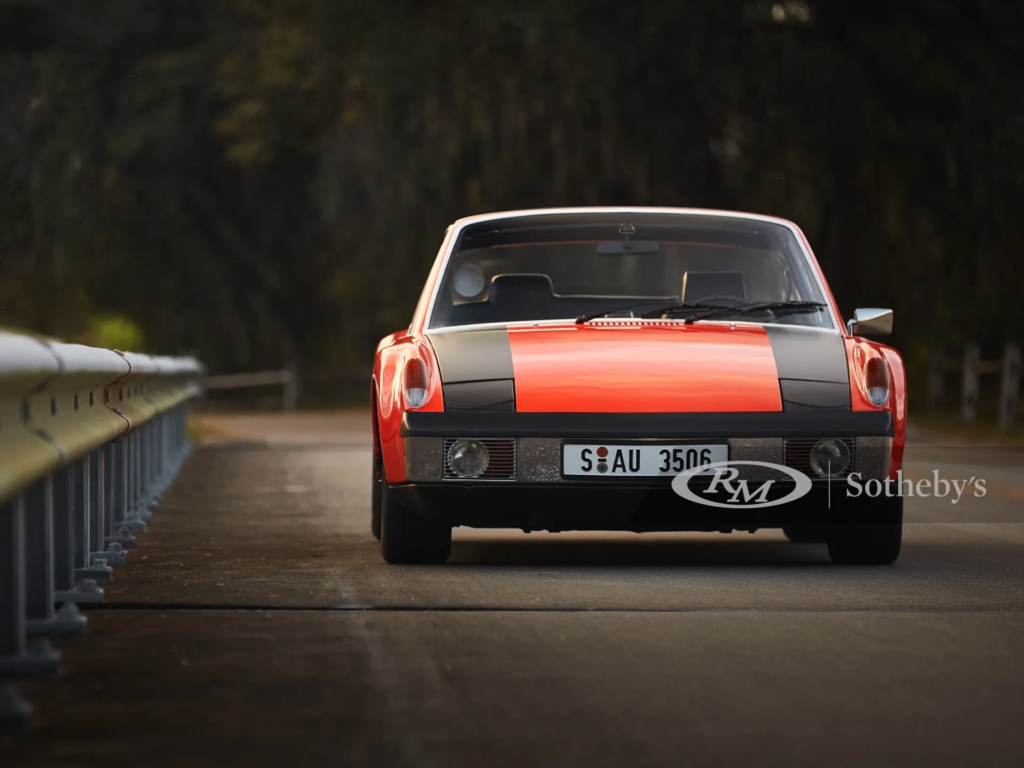 Porsche factory documentation indicates that this 914/6, car number 0233, is the 2nd of 15 M471 examples produced in 1971. It was delivered new to Hahn Volkswagen-Porsche and clothed in Tangerine paint over a black leatherette interior, with further factory specifications including GT-spec front and rear anti-roll bars (14 and 16 millimeters, respectively), a center seat cushion, and Michelin tires. The originating dealer had struck a deal to assist with Porsche’s racing endeavors, and indications are that this car was initially used as a demonstrator. From Hahn, it passed into the hands of dealer and former works driver Paul-Ernst Strähle, who registered it with the plate “SAU 3506.”

At some point very early in the car’s life, it was further upgraded at Werks 1 with several of the performance parts featured on 914/6 GT Conversion Kit. Among these were additional roof bracing bolted between the windshield frame and the targa bar, Koni front struts, 911 S brakes, and a staggered set of wider, GT-specific 15-inch Fuchs alloy wheels. Recaro sport seats and matte black exterior stripes were also added. Later in its history, the original 2.0-liter flat-six was removed for undocumented reasons and replaced with the presently installed 1972 914/6-based engine.

In the spring of 1972, 0233 was used as a camera car at the Nürburgring Nordschliefe to film a commercial introducing the 1973 914 2.0. This M471 shared the track with three 914/6 GTs, filming them as they circulated. Historic imagery indicates that at least the larger wheels had been added by this time, and a communications antenna was installed in the rear driver’s quarter panel during filming.

On 17 May 1973, Strähle sold 0233 to Porsche Art Director Erich Strenger, then indicating approximately 36,780 kilometers. Strenger had enjoyed a two-decade relationship with Porsche by 1973, making an indelible mark on Porsche’s visual history. His accomplishments included serving as the first art director for Christophorus, Porsche’s official magazine. He also designed the first Porsche catalog in 1951, most of the company’s early brochures, and countless promotional racing posters from the 1950s through the 1980s. Over the ensuing years of passionate ownership, Strenger happily documented several of his trips across Continental Europe within the pages of Christophorus. In a 1983 issue of the PCA’s Panorama magazine, Strenger famously commented that inquiries on his beloved 914/6 were turned away by his price: $1,000,000.

In 1988, Strenger finally sold 0233 to his friend Gerhard Blendstrup, with Strähle’s assistance. Blendstrup also had a history with Porsche, working first in Stuttgart in R&D and later heading marketing activities for Porsche Cars North America from Reno, Nevada. By 1997, Blendstrup and 0233 had retired from Nevada to California. After another decade of California residence, Blendstrup sold 0233 to the consignor, an active PCA member and consummate 914 aficionado.

This unique 914/6 was in very good condition, but having researched its history, the consignor was determined to return it to a significant previous state. This would include replacing the Recaro seats and returning the bumpers to their chrome finish (Strenger had them painted). A complete 1971 vinyl interior, carpet kit, OEM rubber seals, chrome trim, and even a Sigla windshield were sourced from the NOS inventory of 914 specialist George Hussey’s Automobile Atlanta. The car was also refinished in its factory-correct Tangerine by Mirek’s European Auto in Oldsmar, Florida.

Having completed its restoration in early 2008, the consignor reports that it has required nothing but routine maintenance since then. Within his care he has added nearly 5,000 miles (~8,100 kilometers) while displaying this important M471 at numerous PCA events and concours. The Strenger GT has been most notably included within the Historic Display area at the 2008, 2011, and 2019 editions of the PCA’s annual Porsche Parade. 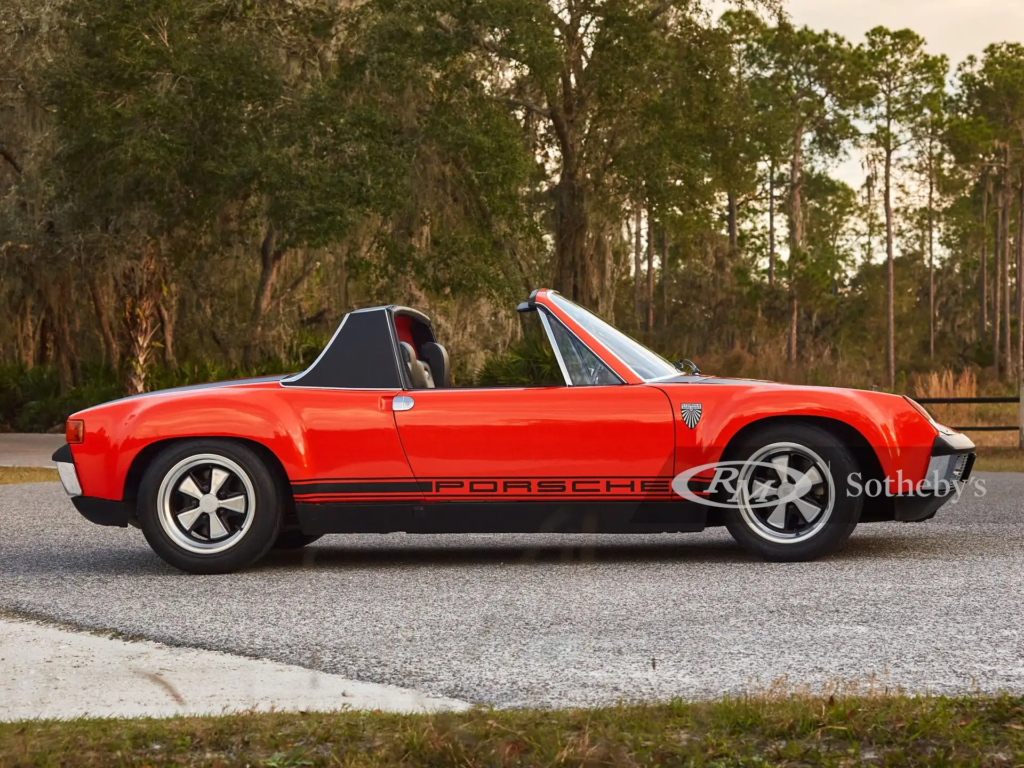