A brilliant step forward in both performance and technology following in the footsteps of the 959 and the Carrera GT, the Porsche 918 truly brought the manufacturer into the 21st century. At the forefront of both the 918’s technology and performance is its hybrid powertrain. Boasting three separate powertrains, the most noticeable of these is the mid-mounted 608-brake horsepower, gas-burning 4.6-liter four-cam V-8, a powerplant that produces almost exactly the same amount of horsepower as the 5.7-liter V-10 that graced the Carrera GT. It features dry-sump lubrication, direct injection, variable camshaft timing (Variocam), no external ancillary drive belts, and an Iconel exhaust system that exits between the cylinder banks at the top of the engine, which Porsche calls Internal Hot Side, or IHS.

The conventional gasoline powertrain is mated to a hybrid module and decoupler unit which drives the rear axle through the now-renowned Porsche seven-speed PDK dual-clutch transmission. This hybrid module consists of a 154-brake horsepower AC electric motor that operates in parallel with the gas engine and also serves as the main electrical generator. A further electric motor producing 127 brake horsepower is mounted at the front axle and operates through an electric clutch. With all three powerplants working together, the 918 Spyder produces a monumental 887 combined horsepower and over 900 pound-feet of torque.

With power being sent to all four wheels, the 918 Spyder can reach 62 mph from a standstill in just over two seconds, leading into a top speed of well over 200 mph. The car’s carbon-fiber rear wing and innovative aerodynamics help to keep the car planted at speed, delivering much needed stability as the speed increases.

Of course, at some point, the driver will need to let off the accelerator and hit the brakes, and the 918 uses that to its advantage as well. The energy recovered by the braking system is captured and sent back to a 312-cell lithium-ion liquid-cooled battery pack that sits behind the passenger compartment, helping to add power back to the batteries. In addition, the battery pack can be externally charged via a plug-in universal charger fitted to the right side of the car. Since the 918 Spyder can be driven on electric power alone, it is classified as an Ultra-Low Emissions Vehicle.

Slide behind the wheel and the 918’s cabin presents you with all you would expect from a 21st century supercar. A button on the multifunction steering wheel allows the driver to select from E-Power, Hybrid, Sport Hybrid, Race Hybrid, and Hot Lap drive modes, while the Porsche Active Aerodynamics (PAA) system offers a choice between Start, Speed, and Performance modes. The car’s infotainment and navigation system can be found on a touch screen on the elevated center console, providing a streamlined look for the system both when off and in use.

Once production was given the go-ahead, Porsche decided to produce just 918 examples for road use. The production 918 Spyder finally debuted to the public at the 2013 Frankfurt Motor Show, with the first examples departing the factory by December of that same year. U.S. deliveries started in mid-2014. It is believed that roughly one-third of production was earmarked for U.S. clients.

Those looking for something slightly more radical could opt for the addition of the Weissach package. Seeking to shed excess weight, Weissach package-equipped 918 Spyders are fitted with magnesium alloy center-lock wheels, lighter-weight Alcantara trim instead of the usual leather, fire-resistant fabric, fabric door-pull straps instead of conventional handles, and six-point harnesses. Air conditioning, Burmester stereo, and even the glovebox was removed, but could be added back at no cost if necessary. These weight-saving measures helped to shed over 100 pounds from its curb weight.

This 2015 Porsche 918 Spyder was ordered in Black over a “Color-to-Sample” tan leather interior, equipped with the desirable Wessiach package. The consignor believes this to be the only such example specified this way. Further options include a front axle lift system, a glare-reducing interior package, stone guard, two-zone climate control, cup holder, Homelink, a seat-pad for the lightweight driver’s bucket seat, Burmester high-end surround sound and storage compartment, Porsche Universal Charger (AC), and a “Special Wishes” extended-length external charging cable that stores in the upholstered front luggage bay. It is accompanied by a window sticker, manuals with case, car cover with bag, and charger with case. This 918 Spyder has covered 8,193 miles from new at time of cataloguing.

Pioneering hybrid-electric technology for not only Porsche as a company but the supercar industry as a whole, the 918 Spyder is nothing short of a landmark vehicle. One of the fastest vehicles one can buy, but one docile enough to drive on a daily basis—and in total silence in full electric mode—it is truly one of the most interesting and exciting cars built thus far into the 21st century. 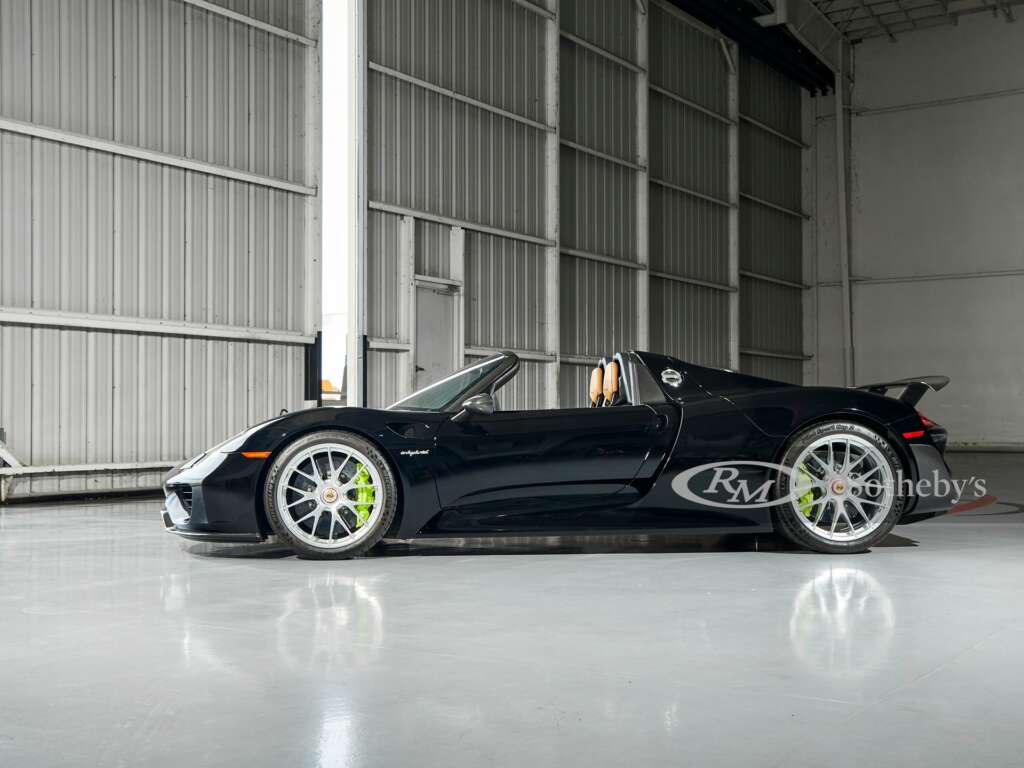 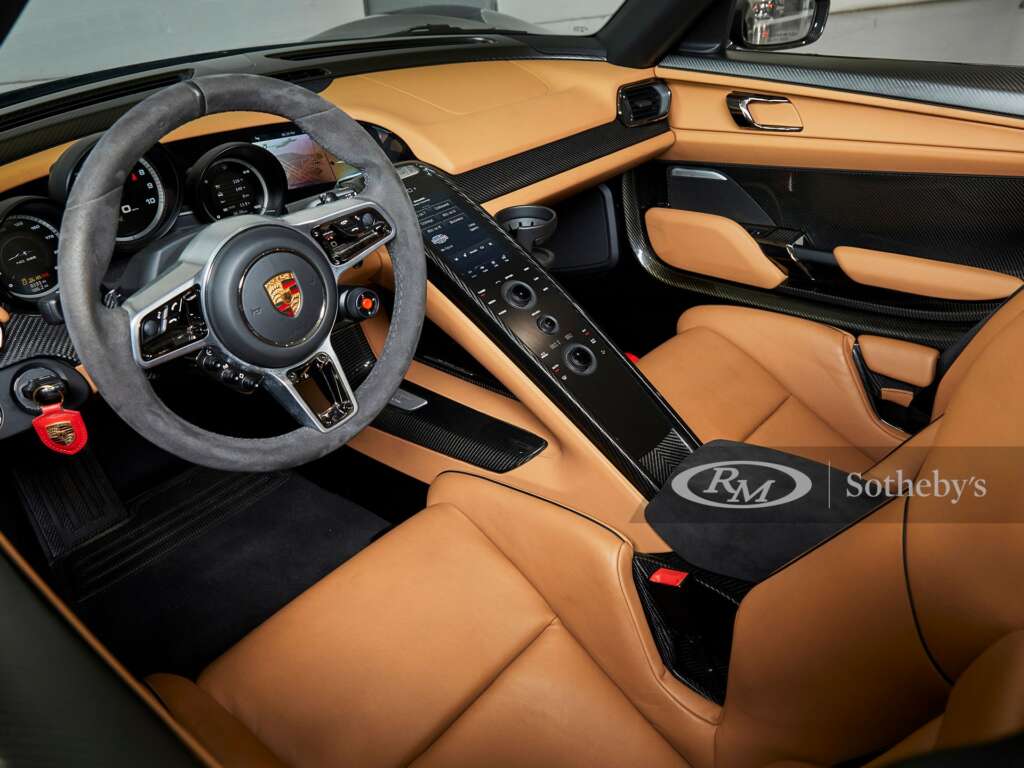