One of seven 959s said to have been ordered by the royal family of Qatar in 1989 – Single noteworthy owner from new; showing only 961 km at the time of cataloguing – Finished in Wine Red Metallic over Burgundy interior – Over CHF 130,000 of recommissioning work by Centre Porsche Genève in 2018 and 2019 – A rare opportunity to acquire an historically significant car Despite the immediate and inarguable impact that the Porsche 959 had on the supercar scene at the time of its launch in 1986, esteem for the distinctive German sports car has seemingly only grown further over time. Consequently, pristine examples of a car that was, from the outset, very rare are becoming ever harder to come by. Indeed, only 337 production examples were made between 1986 and 1993; rarer still are models made under the Porsche Exclusive label, a department launched by the marque in 1986 to offer very personalised versions of its cars to certain clientèle.

When the 959 was shown to the world for the first time in its final production form in 1985, the Porsche Exclusive division was itself being readied for roll-out. Cars made by Porsche were already widely regarded as both luxurious and at the higher end of performance, but the company wanted to capture the ultra-bespoke “special wishes” orders from wealthy customers who could have easily turned to rival sports car manufacturers better prepared to accommodate the most personal buying experience.

First deliveries of the standard 959 were made in 1986, and the revolutionary sports car naturally caught the attention of the world’s most discriminating buyers—the Porsche had, after all, been positioned as a poster pin-up rival to the likes of the Lamborghini Countach or Ferrari’s 288 GTO and upcoming F40. It should come as little surprise that many of these buyers were also newly acquainted with the Porsche Exclusive division and its endless customisation options. One such party interested in a bespoke version of contemporary German exotica was a member of the Qatari royal family. And their appetite was greater than just one bespoke version: The noteworthy car enthusiast is said to have ordered seven 959 models through the Porsche Exclusive department, including the 1989 959 Komfort offered presently.

Such is the commendable discretion and respect with which the Porsche Exclusive department treated its valued customers that little was made of the deal at the time; only certain details have materialised since. It is thought that the sheik from Qatar ordered each of the seven 959s with unique colour schemes. Every car was required to have a matching leather interior—with a palette said to span from a completely gold car through to this example. Finished by the factory in an eye-catching Wine Red Metallic over Burgundy interior, this 959 Komfort retains this distinctive look to this day.

This Porsche 959 Komfort was completed in November 1989. The car was ordered with a relatively conservative number of optional extras: the build sheet stretches to heated front driver and passenger sports seats with electronic adjustment, along with a Porsche-supplied anti-theft device. While the colour scheme made the 959 stand out, the rest of the car’s configuration followed standard issue by Porsche—which, to be sure, was highly impressive by contemporary measure. The 444-horsepower, 2.8-litre, twin-turbocharged flat-six engine that gave the 959 its performance edge is paired with a six-speed “dogleg” manual gearbox that is famous for featuring a “G” on its gearstick. This stands for gelände, German for “terrain”, though few would be bold enough to take the 959 on an off-road surface any more rugged than loose gravel. A four-wheel drive system, a pioneering feature increasingly common on today’s supercars, sent power to every corner of the 959.

Inside the car, the 959 cabin’s burgundy theme reflects its exterior colour, and it is evident in the carpets, gear gaiter, steering wheel, doors, dashboard, and seats—which also artfully blend in a shade of grey. The top part of the dash panel is designed with a sliver of wood-effect trim, below which the car is fitted with the period-correct Blaupunkt Bremen SQR 46 cassette radio. Remarkably, the odometer reads only 961 kilometres at the time of cataloguing, with its royal Qatari owner using it sparingly over his 30-plus years of enjoyment.

Between 2018 to 2019, the car is documented to have undergone over CHF130,000-worth of work at Centre Porsche Genève, the official Porsche workshop in the Swiss city. Over one year of workshop services, Porsche engineers carried out an engine overhaul with the replacement of important water seals, fuel hoses, belts, filters, spark plugs, and ignition parts while also cleaning the fuel injectors. The work further included the replacement of certain suspension components, and new tyres were fitted. A full copy of the service report from Centre Porsche Genève is available to view for interested parties.

The workshop invoices, compared against the odometer reading, indicate that this 959 has covered fewer than 10 kilometres since this work was completed by the Porsche workshop. Considering how rarely any Porsche 959 Komfort is seen at auction—let alone a unique Porsche Exclusive example that has seen such scant use from new—this car’s fascinating history only serves to make it an even more compelling opportunity for any marque collector or enthusiast. 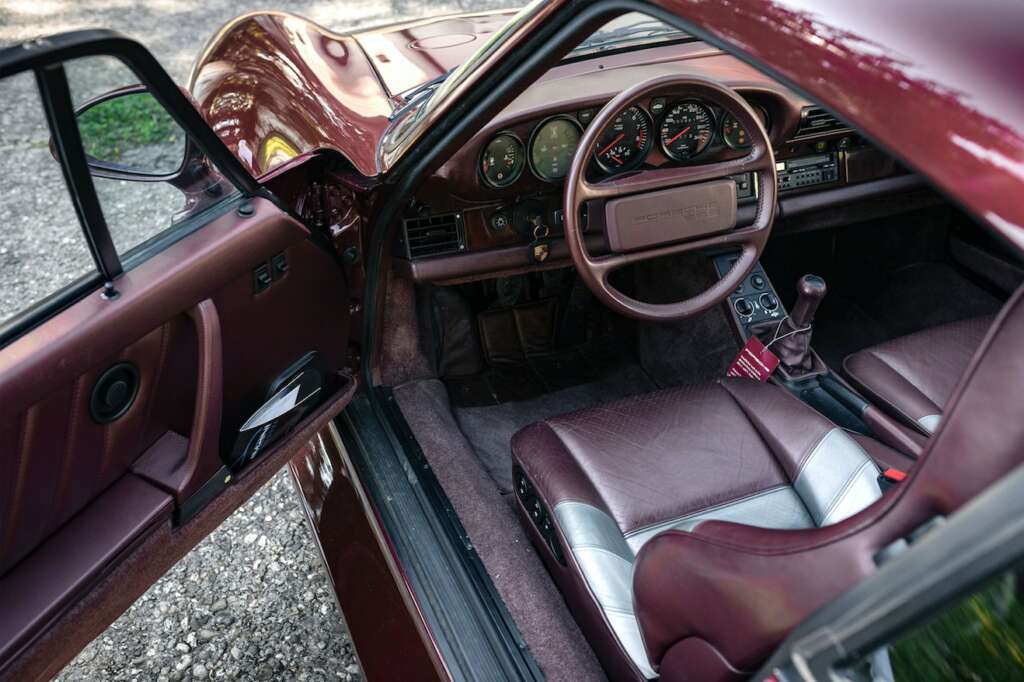 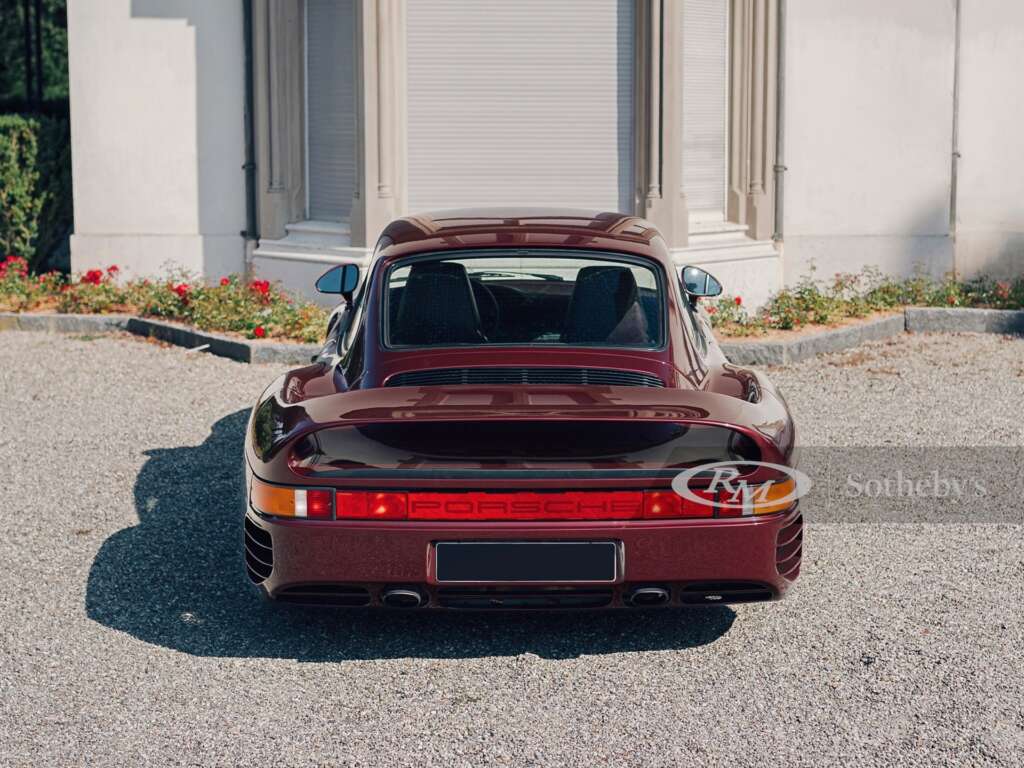 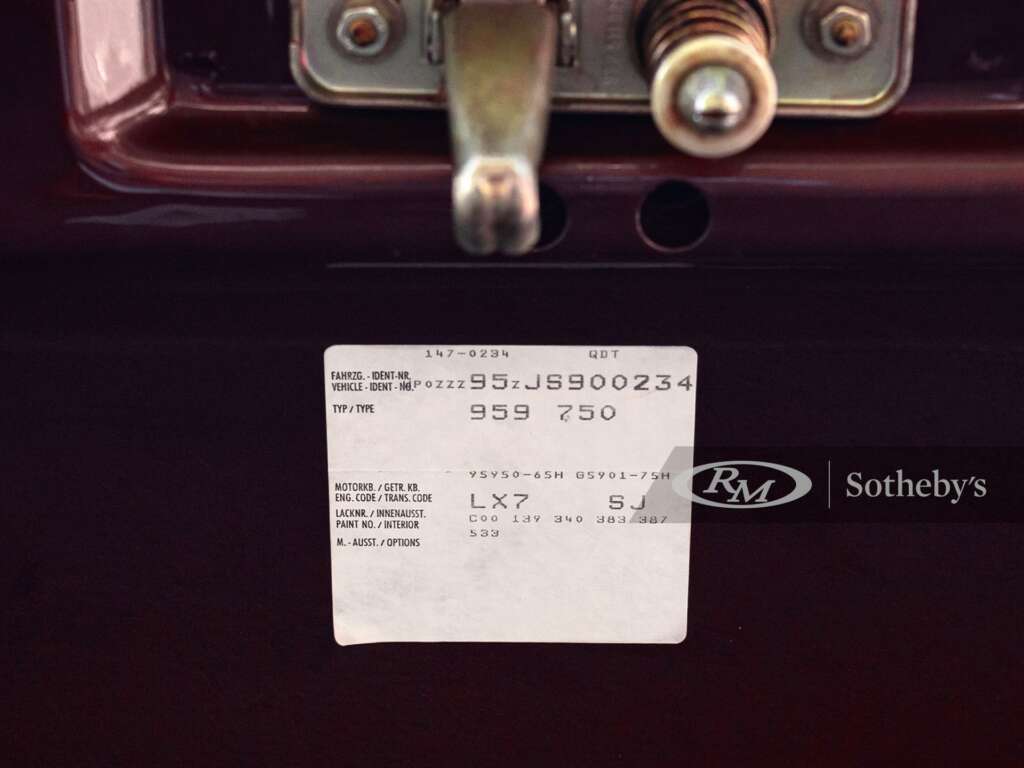