In this auction there is the possibility of buying one of only 4582 Porsche 993 Targa cars built. The 911, which was first registered in the USA in 1997, has the VIN WP0DA299XVS385087 and has a Carfax, which serves as proof of maintenance in the USA. From the Carfax the owners in the USA can be found out, according to the current owner there were 2 owners in Germany, including him. The exact number of previous owners in the USA is unknown to him. The 993 Targa has a full service history, is characterized by the so-called "Matching Numbers" and a short Classic Data rating from 2016 with the grade 2, comes with 2 keys including radio transmitters and has a TÜV until March 2022. In addition, the 993 Targa has an extensive history with many invoices, receipts and previous TÜV reports, all of which were summarized and listed in a folder. 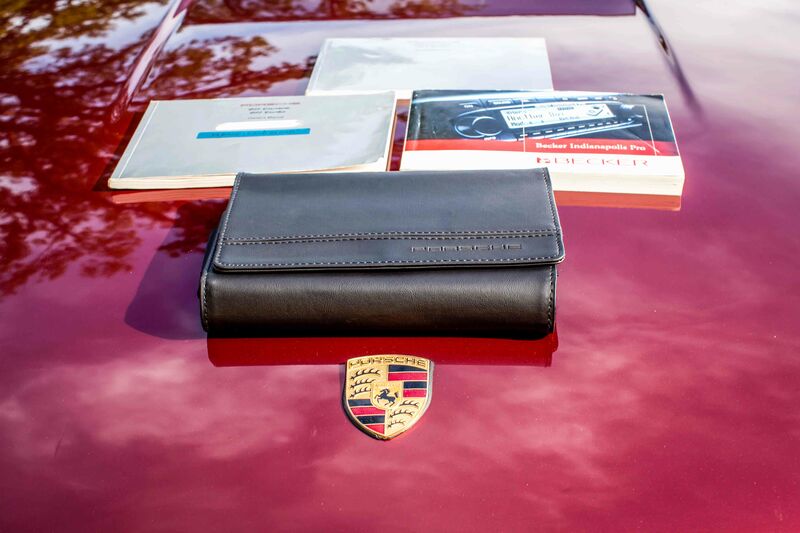 In 2012 the Porsche was completely repainted due to stone chips and a side film removal, of course in the original color called Arena Red Metallic. Invoices for this can be viewed in the photo gallery. In 2015 the 993 got a new windshield, the window frame was repaired and repainted. Due to the complete repainting in 2012, the body is in very good condition, as an external defect, the rear bumper is objectionable due to a small parking bump. The Targa roof runs well in its guidance and also closes tightly, but according to the owner the front wedge does not have the right pressure, which is why the wind whistles a bit when driving. However, if you press the wedge into place, you can no longer hear any wind noises, according to the owner. After consulting a Porsche workshop, this problem can be solved quite easily, since the sunroof itself does not cause any problems. Furthermore, regarding the condition of the body, the Porsche 993 Targa has not had an accident during its holding period, according to the owner.

Tires were completely new mounted on the 993 in March 2021, the rims are original Porsche aluminum rims with a turbo look, on which the paint on one rim has flaked off due to age. Otherwise the rims are in good condition with no damage. The 993 Targa is also in good shape when it comes to braking; there are no modifications to the chassis.

In the interior you can see gray sport leather seats, which were reupholstered in the original color in 2012. The entire interior of the Porsche Targa is in good condition and appears to be free of damage. In addition to the standard equipment, the 993 Targa has the following optional equipment according to the factory M codes: 224 automatic brake differential (ABD, only for Tiptronic), 249 Tiptronic transmission, 329 radio Blaupunkt Toronto SQR 48 (radio "Porsche CR210" USA), 425- Rear window wiper, 432 steering wheel with Tiptronic controls, 454 automatic speed control and 659 on-board computer. All control elements are convincing due to their proper function, the electric seat adjustment of both seats has been renewed and the doors have been newly insulated, and new loudspeakers have also been installed.

The odometer reading now shows 94,753 mls. The mileage speedometer was replaced by a km speedometer at 89,500 miles, which only shows the speed in km / h, but the mileage is still in km. According to the information, the total mileage is around 149,000 kilometers. Based on the overall condition, the mileage seems plausible, which can also be traced on the basis of the invoices, documents and Carfax. The instruments are working properly.

The 993 Targa is powered by a 3.6 liter six-cylinder boxer engine with 285 hp and 340 Nm, power is transmitted by a four-speed automatic transmission called Tiptronic S, which is operated with two rocker buttons on the steering wheel. There are no known defects in the technology, the boxer engine runs flawlessly and the automatic transmission shifts through the gears cleanly. The engine and transmission were overhauled in 2012: pictures of the work can be viewed in the photo gallery. The last major invoice (€ 2,100) is from March 2020: The list of works can be viewed in the series of images.

There are a number of documents, proofs, Carfax and invoices that underpin the condition of the 993 once again, as well as a past Classic Data report. The owner also notes that the Porsche is a non-smoking and animal-free car, a contemporary Becker radio with Bluetooth connection is installed and he adds half a roll of the new leather to the seats, as well as a touch-up pen in the original color. In summary, it can be said that this 993 Targa has always been serviced regularly, verifiable in America by the Carfax and verifiable in Germany with many invoices for the work carried out. Therefore, one can assume that in the future you will be able to enjoy the sun carefree in this Targa, and the engine and transmission were only overhauled nine years ago.

The underbody is rust-free, there is nothing to complain about, due to the fact that the 993 is not covered with underbody protection, you can see its healthy condition.