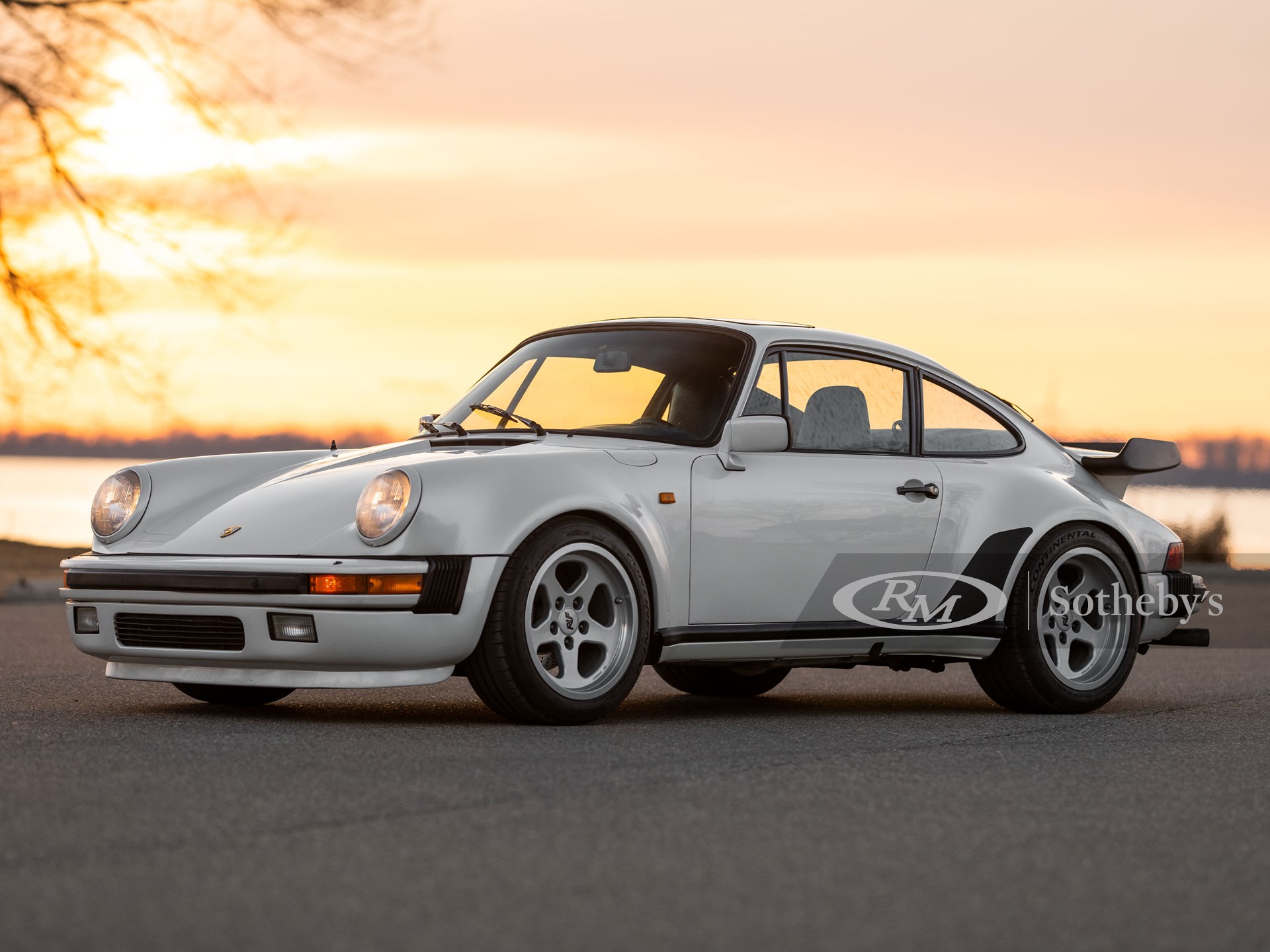 Auction Online Only: Open Roads, April April 21, 2021 - April 29, 2021 View all lots for this auction
This car auction is hosted by RM Sotheby’s. Click here to continue to the auction.
Go to auction page 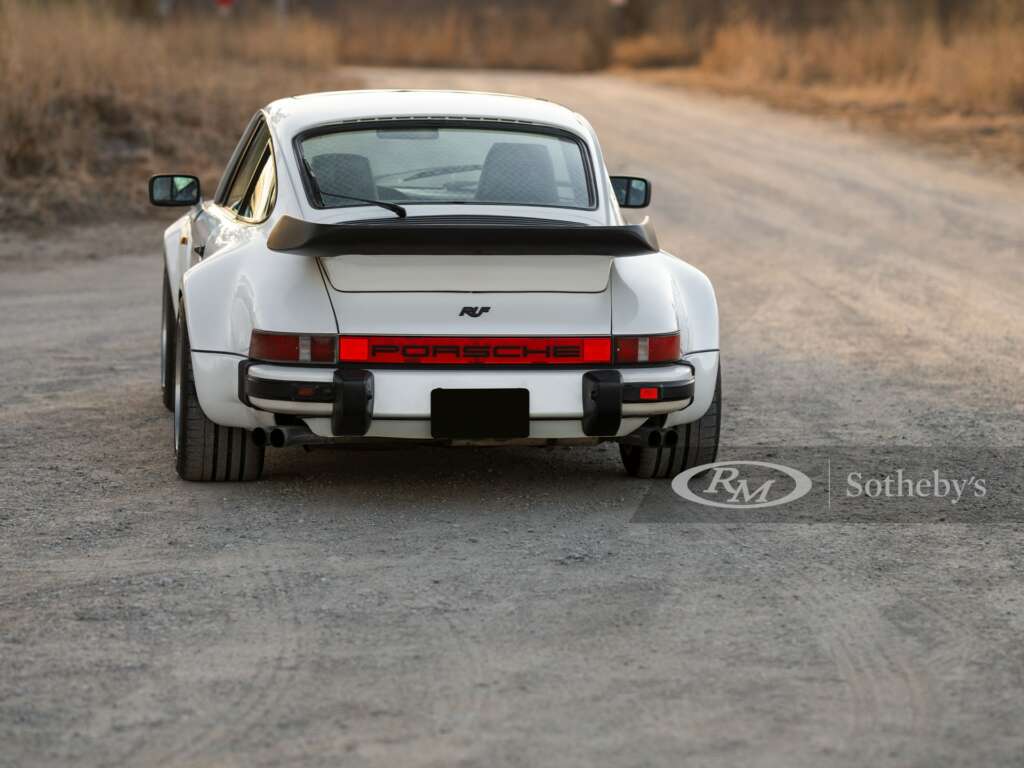 From 1983 to 1989 RUF offered the BTR, which was an abbreviation for Group B Turbo RUF. It is believed that RUF built approximately 20 to 30 examples and converted untold number of customer cars, utilizing either a 930 Turbo or a Carrera 3.2 as the base. RUF’s modifications were highlighted by the BTR-spec engine. The block was punched out to 3.4-litres, modifications were made to the turbocharger, and twin-plug ignition was installed. The result was an engine that produced 374 bhp. Further modifications included RUF’s own five-speed gearbox, a RUF instrument cluster, upgraded Recaro seats with Simpson race harnesses, RUF steering wheel, RUF 17-inch alloy wheels, and a front spoiler with an integrated oil cooler. Period testing by Car & Driver claimed the car was capable of achieving 0 to 60 in just 4.3 seconds and a test conducted by Auto, Motor, and Sport achieved a top speed of 190 mph.

Delivered new to Germany, this Porsche began life as a 1981 911 Turbo Coupe. It left the factory finished in Paint to Sample Metallic White (Code 99) with black anodized trim. It was factory-equipped with an electric sunroof, black headliner, a heated and tinted windshield, and Goodyear tires. It is one of 698 Rest of World (ROW) 930 Turbos built for 1981.

In 1987 Dr. Wilfried Eckhardt, a well-respected physicist who is believed to have split time between Frankfurt-Sachsenhausen, Germany and Malibu, California, had the car converted by RUF in Germany to a BTR. The car was upgraded to a BTR 3.4-liter single-turbo engine with a new intercooler and RUF’s four-pipe exhaust system. The engine produced a breathtaking 374 bhp. It was mated to a new RUF-built five-speed “dog-leg” transaxle with 40-percent limited-slip. An additional front oil cooler was installed in the redesigned front fascia, which was edged with a new fiberglass spoiler. The interior was not ignored; the RUF invoice notes new instrumentation, including a speedometer calibrated in miles-per-hour, with Dr. Eckhardt having made his intentions clear to export the BTR stateside; and a larger boost gauge replaced the standard clock. The owner also specified a cruise control system and a security system.
Soon after this expensive conversion was finished, Dr. Eckhardt arranged shipment to the Port of Los Angeles in the Fall of 1987. Nearly a year after getting the car stateside Dr. Eckhardt had new seats installed and modifications done to the suspension which raised the ride height. Dr. Eckhardt took very good care of the RUF under his ownership, evident in the service invoices on file from 1988 to 1997 with nearly all work carried out by the Porsche specialists at Motorsport Inc. in Los Angeles.

The car changed hands at least twice in the early 2000s, remaining in the state of California. The engine was completely rebuilt and a new clutch was installed by Foreign Sport Technician in Santa Monica in 2004 with 43,045 miles. The RUF eventually found its way to Virginia around 2008. At that point and Alpine stereo was installed along with an Infinity speaker. Additionally the suspension was gone through and items requiring replacement were addressed. In 2015 the RUF was acquired by a private collector of sports cars and motorcycles from Michigan. He had the car repainted in 2016. The consignor purchased the RUF from the collector in 2018.

Today, this 1981 Porsche RUF retains its desirable BTR engine and RUF gearbox. It rides on a set of RUF Speedline 17-inch forged alloy wheels, sourced by the consignor. They’re shod in Continental Extreme Contact Sport tires and have covered less than 1,500 miles. The seats are trimmed in blue leather with tartan inserts. Further modifications to the interior include an Indianapolis Formel leather wrapped steering wheel and a WEVO shifter with a wood shift knob. The RUF branded odometer displayed 52,108 miles at the time of cataloguing. The car is accompanied by RUF letter and invoice, customs documents from 1987, service invoices dating back to 1988, its Porsche Certificate of Authenticity, and a driver’s manual maintenance record book.

Please note that this car’s CARFAX report states that it was involved in an accident. 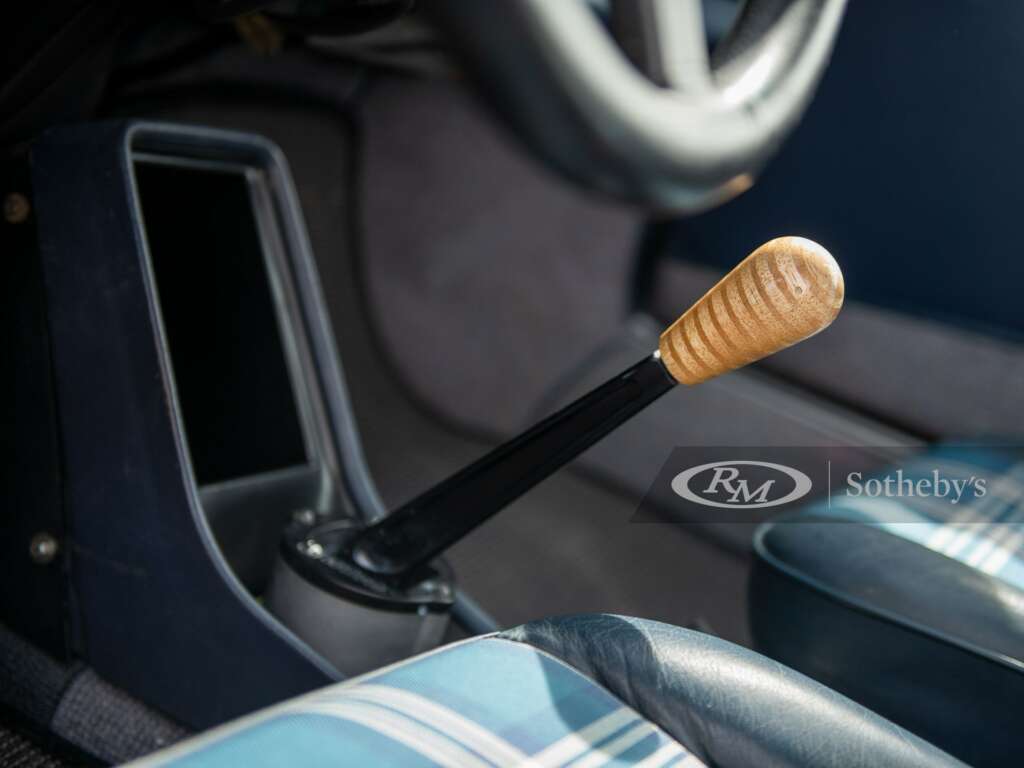 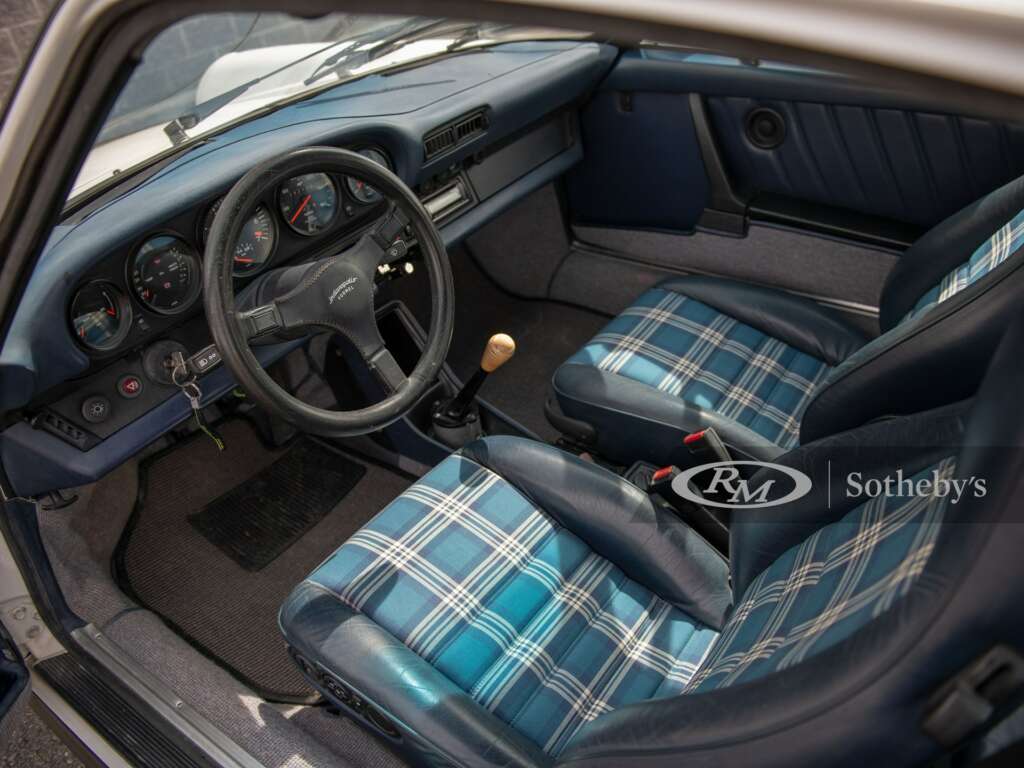 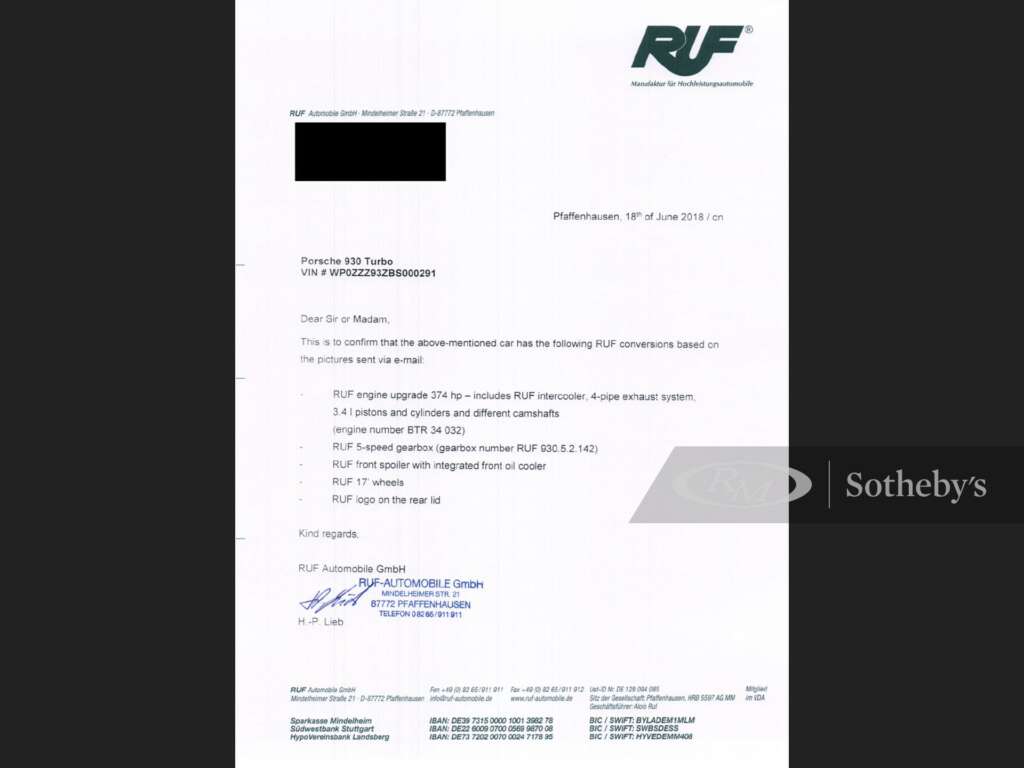 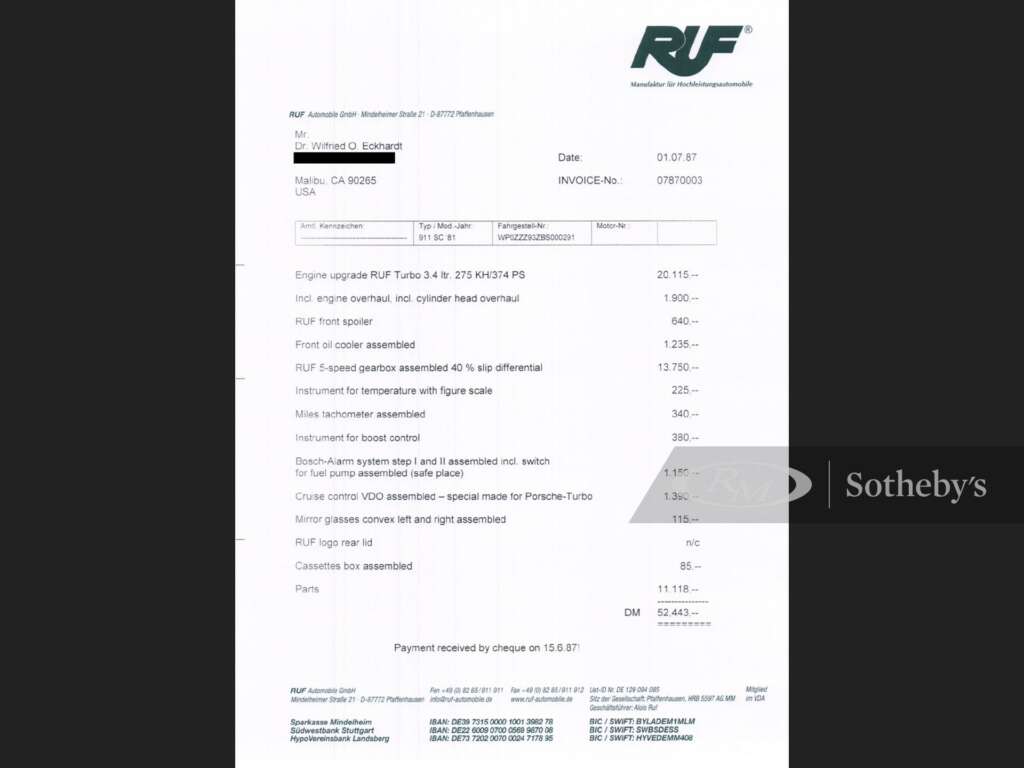