Aleksandr Markovsky and his aircooled Joker 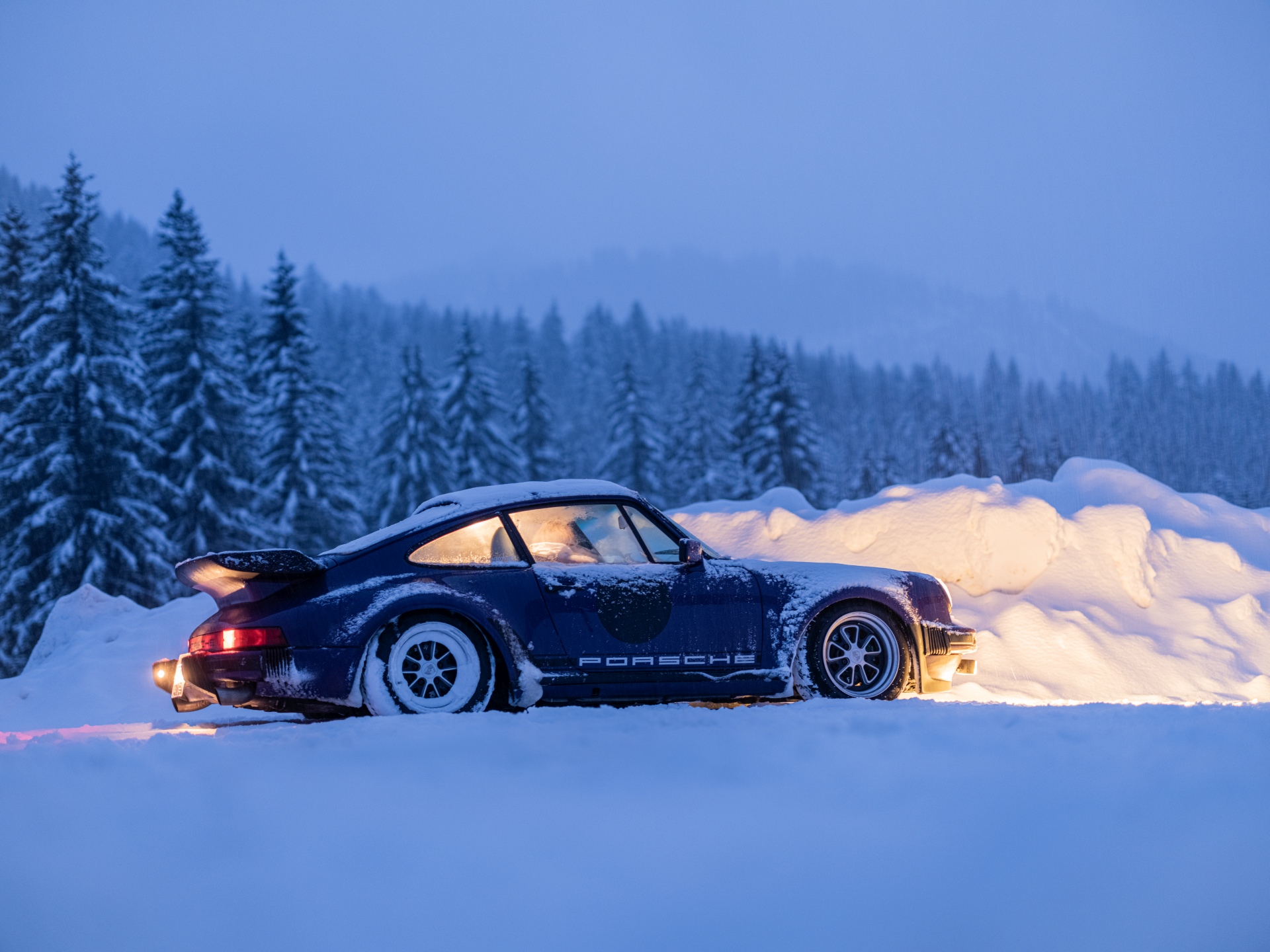 We at Elferspot Magazine are always happy to talk to Porsche enthusiasts from all over the world about what sparked their passion for Porsche. After all, it’s often precisely these stories that connect us enthusiasts and lead to many friendships over the years. This time I arranged to meet Aleksandr Markovsky for the Elferspot Porsche Talk. Alex is a photographer and drives a Porsche 911 Carrera 3.2 WTL named Joker. Besides Bentley and Lamborhini, Porsche is also one of his clients. Why Porsche still comes first for him despite shootings with Horacio Pagani himself and what the Ruf family has to do with it, you can find out now!

Hi Alex, welcome! It’s a good custom in the magazine give our readers a brief introduction. So, where are you from and where does the passion for Porsche comes from?

Thank you Richard, I’m happy to do so. I am 29 years old, photographer for lifestyle, watches and especially cars. I grew up in Moscow and come from a very normal background. Around the turn of the millennium I gradually came into contact with cars. Like probably most of the guys of our generation, I got into it through computer games. Need for Speed: Porsche Unleashed was particularly appealing to me. Of course, movies like the Fast & Furious series also fueled the fire. I inhaled everything that had to do with cars. Today, I spend a lot of time in Switzerland. That way I’m close to the Alps and can enjoy my air-cooled 911s at their best!

How did you get into photography? Moscow was probably not the perfect location for car spotting when you were young.

As a teenager, beign 16/17 years old, I started it as a hobby. For little money I bought better lenses over time and worked myself further and further into the matter. It wasn’t long before I was asked, if I wanted to do a shoot with a car. Of course, I accepted immediately. Through contacts I photographed more and more vehicles. After a short excursion into the world of video production, I quickly returned to photography. Although I also like to take pictures of landscapes and watches, cars are my true passion. Today, I work directly with car manufacturers, including Porsche. That allows me to travel the world. Many of my clients have also become friends in the meantime. I owe them an extreme amount and they also allow me to drive very special cars. Without these friendships, this would probably never have been possible for me.

What was your craziest shoot? And what is it like to work with Porsche?

The craziest thing was certainly when I was a guest at Pagani for a factory tour. Horacio Pagani himself was also there and I must have caught his eye. I then told him that I had recently taken photos in the neighborhood at Lamborghini and showed him the photos. He liked the photos and invited me the next day to photograph his very private collection.

My first job for Porsche however was to take the photos for the new, GT2-based Porsche 935 Moby Dick tribute car. I was absolutely impressed, almost positively shocked, by how Porsche works. We were in Portugal in a hotel. We were told the night before to leave for Portimao at 6am. There were around 200 people in total in the lobby and at breakfast. At 05:59 on the dot, everyone, and I mean everyone, got up. Everyone knew exactly what they had to do. Everything was meticulously planned. I was really impressed by this punctuality and precision. It was probably the best organized shoot of my life.

Did that have a lasting impact on you? Is that why you now drive a Porsche or was there another trigger?

It was certainly a factor. Seeing how precisely Porsche works, gives you a good feeling about the cars. And I really liked this professional way of working extraordinarily well. However, the main reason I became a Porsche nut goes back to the RUF company. Via a friend I had the opportunity to take part in a private event at the RUF factory. The Ruf family had organized a rally with pretty much all the different models of the company’s history. Just touring the company grounds and halls was fascinating in itself.

The most beautiful thing, however, was the connection with the family. The Rufs were extremely friendly people and the atmosphere was fantastic. They even held a family dinner and shared amazing stories that day. It was very warm and almost as if you were a part of their family. For me, it was surprising and impressive how closely Ruf and Porsche are connected. In general, that time was probably the most formative for me in my professional life. Everyone there was incredibly friendly, everyone loves Porsche, dedicates their whole life to the brand. And this passion also rubbed off on me, there. I love these air-cooled cars and also the people who deal with them.

And as a result, you decided to buy yourself a Porsche 911?

You could say that. When the pandemic set about changing all our lives in 2020, I decided to buy an air-cooled Porsche 911. I had been searching for a suitable car through various contacts. I wanted to restore it and rebuild it according to my own wishes. In Russia, there is actually no real market for classic Porsches. However, after a few days I had received at least a few offers. Among them was a white Porsche 911 Carrera 3.2 WTL. Visually in pitiful condition, but it was good enough for a restoration. I then bought the car on the spot and got to work.

With the Joker, I wanted to create a Porsche 911 Carrera 3.2 WTL that represents driving art for me. But it is important to me that the focus is on driving. These cars need to be driven hard. Preferably on empty mountain roads! In April, the Joker will be auctioned in one lot with a fitting watch – a unique timepiece by Konstantin Chaykin – and an NFT, including the special artwork shown above.

Aleksandr Markovsky about the motives for the build of his Porsche 911 Carrera 3.2 WTL

I had the idea to make the car purple on the outside and green on the inside. The inspiration for this was the Joker from Batman. We completely stripped the paint off the car and started with a bare metal shell to rebuild my “new” Porsche 911 Carrera 3.2 with the factory turbo look (WTL, option code M491). In total, moire than 800 new parts were installed. Engine, brakes, transmission, interior, everything was overhauled. When it came to paint and leather colors, I looked a little outside the Porsche box. The paint is actually from the Lamborghini shelf. I wanted to design the interior to look a bit like Porsche Exclusive. So, almost all surfaces were lined with leather, including the levers for indicators and wipers.

Recently, a video about the car went viral, that had little to do with driving. Tell us how it came about!

Ha, that was towards the end of a really exhausting day of shooting. We were in the middle of nowhere, near the suiss-italian border. I drove up and down all day long for filming, over and over again. The roads were super slippery, so I had to concentrate all the more. Then, when we took a break at a quiet spot on a mountain, my head went on standby too. I got out of the car with no keys, no wallet, no jacket. And then I remembered that my door handles weren’t working and I was now in trouble. It was getting late, we were a long way from the next town, so the only option was to break into my own car. I then googled which window was the cheapest to replace and consequently smashed the rear side window. In the meantime, however, everything has been repaired.

A story like that only strengthens the bond between you and your car! Where do you prefer to drive? And why do you prefer a Porsche?

It’s not so much the race track, but rather mountain roads. Sure, historic tracks like the Nürburgring are crazy fun, but mountain passes in the evening, when the tourists are gone, are hard to beat. The Stelvio at night is magical! But the Großglockner is also one of my favorites. In the meantime, I accumulated tens of thousands of kilometers along serpentines. For photo shoots, I often drive the same route 10, 15 or 20 times in a row. The mountains are my second home, so to speak. On the other hand, I see the trackdays more as a means to an end. There I can hone my own skills. It’s important to know your own limits.

In my eyes, the most important thing about a car is the balance. There has to be the right amount of everything. Too much is never good. There are cars that have a great engine, for example, but are too heavy. Or have a very stupid gearing, rendering them almost unusable on the road. Subtleties such as steering and pedal resistance are also important. Only when all of this is really harmoniously tuned, you have a great car. And it’s precisely this harmony that no manufacturer achieves as well as Porsche.

A nice transition to our traditional last question. What is your dream car? Multiple answers are allowed!

My absolute dream would be the Porsche 993 GT2. I love the massive appearance and the thick fender flares. That’s why my next conversion will also be an RWB Porsche. However, I would prefer something with a naturally aspirated engine for the mountains. And a manual transmission is a must anyway. Probably my choice would be a 964 Carrera RS or a 911 GT3.

Thanks for the very fun chat, Alex!

Share "Aleksandr Markovsky and his aircooled Joker" with your friends!