How I learnt to love Porsche

Again and again we receive emails with exciting stories from our loyal readers and fans of the Elferspot Magazine. Of course, that makes us very happy. Not all we can publish and we ask for your understanding. We do not want to withhold this beautiful story from Richard Lindhorst. Richard tells us in detail how he became a Porsche lover. And as so often with lasting love stories, the beginning was a bit bumpy or it was a love by a roundabout way. We thank Richard and we wish you a lot of fun reading.

Some things you only understand when you grow older. How I learnt to love Porsche.

As a young person one often investigates things that only endear themselves to you at a later stage. Jeremy Clarkson’s analog with “grown-up food“ is extraordinarily apt here. Which child actually likes the taste of olives? I also misjudged some things in my youth. For example the fascination of the Porsche brand.

Which child actually likes the taste of olives?

It probably started somewhere in the middle 90s. My elementary school friends and I craved cars we admired on glossy posters but never saw on the street. What the Countach or the 512 BBi was for the kids of the 80’s, the McLaren F1 or the Chrysler respectively Dodge Viper was for us. Through computer games, we even got to “try out” these cars. From Need for Speed ​​to Viper Racing and Gran Turismo, we were able to play through almost every imaginable automotive wet dream scenario. In particular, Gran Turismo made sure that Japanese sports cars, which belonged to a rather rare species in Germany at that time, held the greatest appeal to us. One brand was never in focus at that time: Porsche. Not least because you could not drive in Gran Turismo … That did not change until the millennium and the appearance of the fifth part of the “Need for Speed” series: Porsche unleashed. There you could drive through the approximately 50-year history of the Stuttgart luxury brand. Starting with the 356, you worked your way through the decades, driving everything four-cylinder boxers, air-cooled 911s and even racing cars from the Porsche Motorsport department.

I had the first “aha-experience” during the transaxle era when playing through the terrific carriere mode called the Evolution. The pop-up headlights and the spoiler lip on the dome-shaped rear window of the 944 really appealed to me . Much more than the air-cooled 911s. They were somehow too clumsy for me and I did not find them very aesthetic at the time. The holy grail of the game was the Porsche 996 Turbo. This was, so to speak, the final reward of the career mode. Only ten years later did I realize how the fascination of this game had stayed with me.

Over the years, influenced by the family, I had become a BMW fan and bought a BMW E39 530i in 2010.  It was the third E39 in the family. A timeless car with great long-distance qualities, unquestionably. But after driving the 1.6 ton limousine for a year, the car became too cumbersome for me. I had to have something sportier. The options were still diverse and, above all, favorable at the beginning of this decade. An E30 was on my list, as was a Mazda MX-5. At that time, both were still available in good condition for less than 3,000 Euros. Through a forum post on the best racing games of the last 20 years, I was reminded again of the fifth part of the NfS series. There were these transaxle models. I looked around for Porsche 944 and 924S and found that they are changing hands for surprisingly little money. You could actually buy a real Porsche for about 5,000 euros. With TÜV (MOT), a complete service history and all the trimmings! 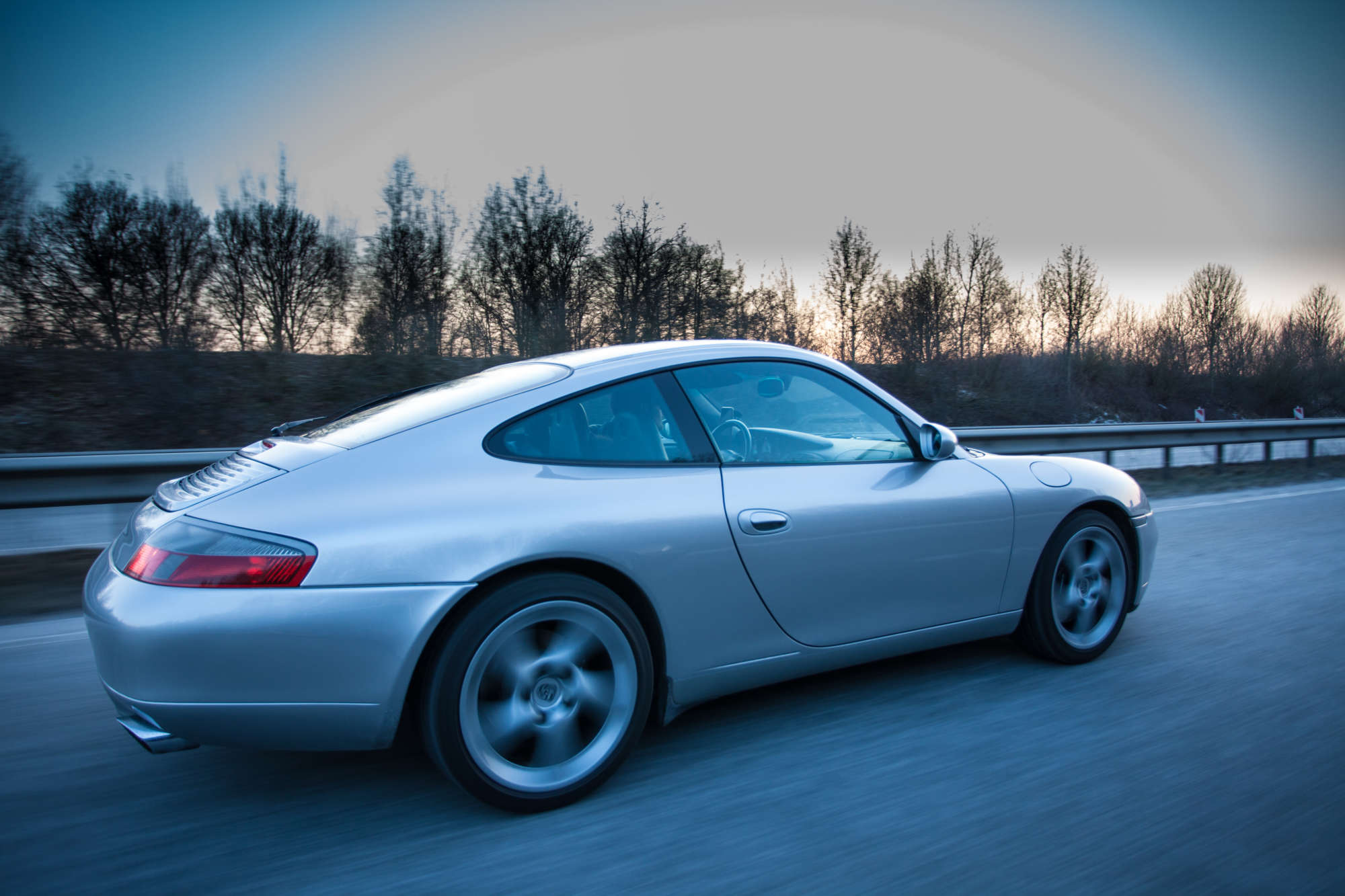 In March 2011 I found an Indian red 924S in Heilbronn. Although the car, which was still considered as a Porsche for the housewives at that time, had a total of 7 previous owners and 202,000 kilometers on the clock, it had a reasonable history and the seller seemed reputable. A friend from Karlsruhe inspected the car in advance and certified it mechanically healthy. Although I had not driven a Porsche before, I really wanted a “tranny”, as the Transaxle Porsches are sometimes called in professional circles. The combination of the large glass dome, the exciting, but at the same time maintenance-friendly transaxle technology, the beefy 2.5 liter engine and the low weight seemed promising to me.

I was looking for a ride from Hamburg to Heilbronn and as luck would have it, I ended up with the press spokesman of the Porsche Motorsport department, Oliver Hilger in his Porsche Cayenne Turbo S. After about 6 hours of driving and all kinds of talks about Porsches, the haggard Alsace-born Nicolas with the 924 picked me up at the gas station where we had agreed to meet. Nicolas drove the car as a winter car and with his sympathetic French he accent told me about the maintenance work done to it. The timing belt was changed recently, the clutch already renewed. Including a spare transmission and fresh winter tires we agreed on a purchase price of 4,500 euros. I could hardly believe that I bought my first own Porsche shortly before my 22nd birthday.

The more than 600 kilometer long journey home with the newly acquired 2+2 built in 1986, went as expected. The car was agile, very well balanced, had a very sensitive steering and the engine offered excellent performance. The 150 horses were enough to accelerate the 1,180 kilogram lightweight Youngtimer, even in fifth gear even more cheerfully in the rev-limiter. All this with an average consumption of just over ten liters of Super Plus per 100 kilometers. The 5-Series did not consume less either.

I could hardly believe that I bought my first own Porsche shortly before my 22nd birthday. The car fascinated me from the first meter I drove. Even if the seating position with 1.95 meters in size took some getting used to and the original three-spoke steering wheel was a bit too big, the car could be moved completely playfully. When turning, you could easily let the tail tremble slightly without any fear of possibly losing  control of the car. In short: I was in love and under the spell of the Stuttgart brand. Everything was where it should be. No frills, just a pure driving machine, without electronic helpers.

For a good six years, the 924S accompanied me in everyday life. It made me a better driver and brought a grin on my face every day. Incidentally, I was still of the opinion that a 911 would only come to my house if it is a GT3. The “ordinary” 911s just did not appeal so much to my emotional side. After about 100,000 kilometers and many beautiful adventures, our journey ended in May 2017.

From then on, even when I didn’t drive a Porsche, I couldn’t stop looking through the classifieds again and again. Actually, my dream car was a Cayman 981, but the prices just did not want to drop. The last Cayman with a six-cylinder naturally aspirated engine is now even considered as an investment. I therefore considered the model 987 that preceded it. After a test drive, however, I was not really impressed with the interior and the small 2.9 litre boxer, so that I remained sobered and imagined I would have to live without a Porsche for several years. In the meantime, I also drove various BMW Z3 and Z4 coupes, as I liked their looks. But when driving the BMWs I couldn’t muster the necessary enthusiasm. For a Z3 test drive, however, I drove to the garage with Frank, the owner of a 2.8 Coupé, in an air-cooled RS 2.7 Clone. This ride left a lasting impression. The rough sound of the boxer engine, the insanely good traction and the simplicity of the car reminded me that I want to drive a Porsche and not a BMW as a compromise solution. 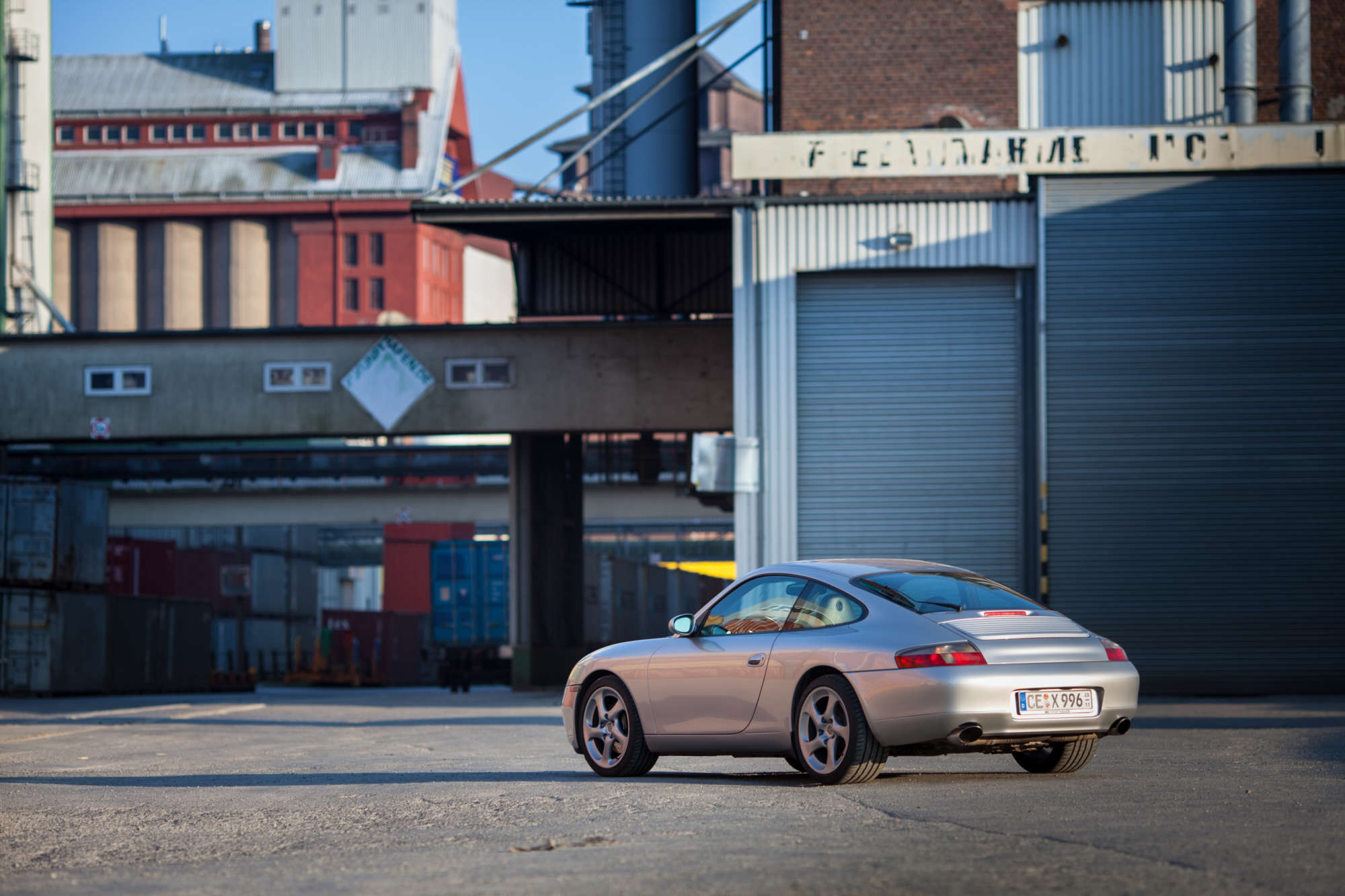 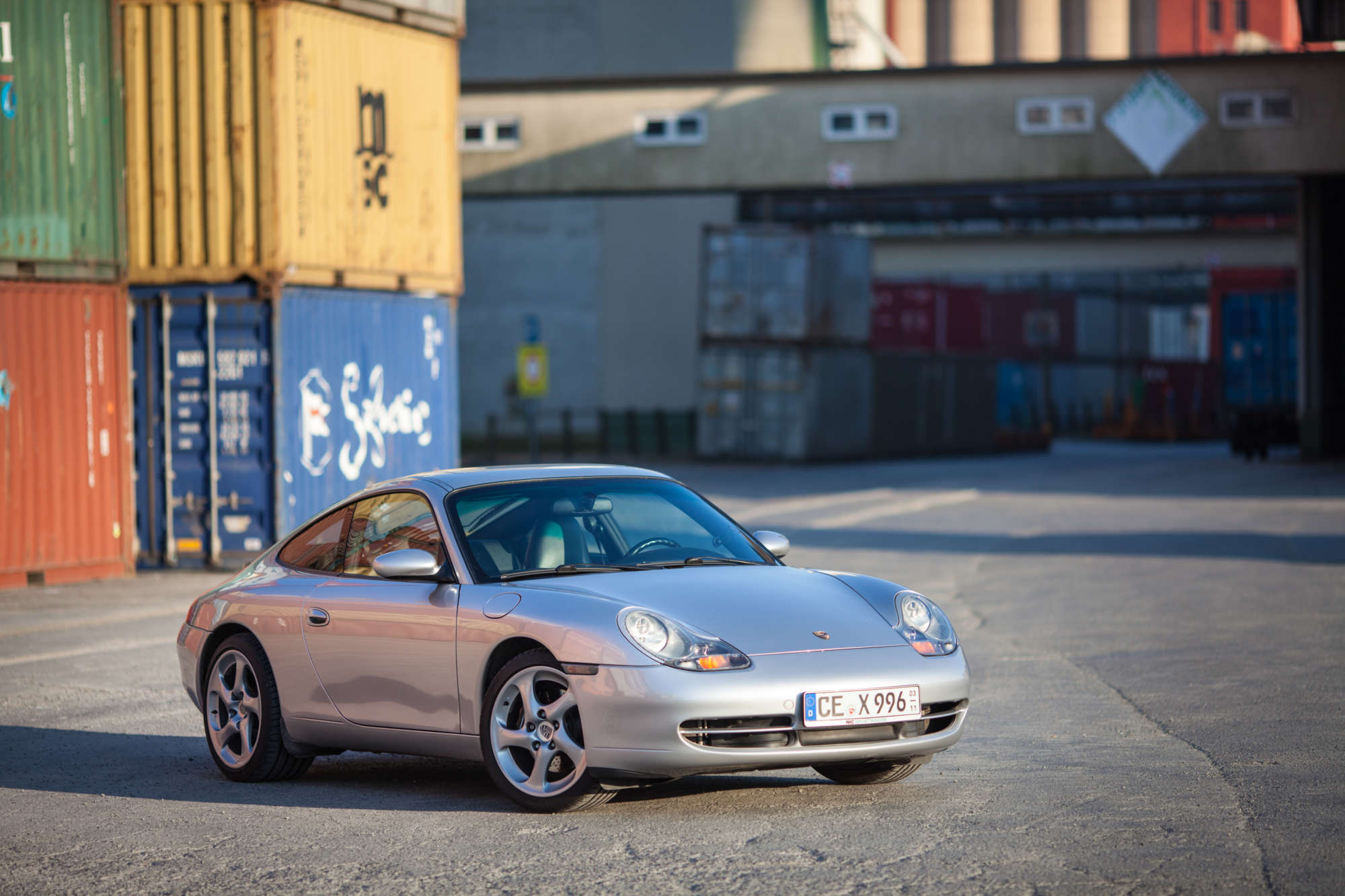 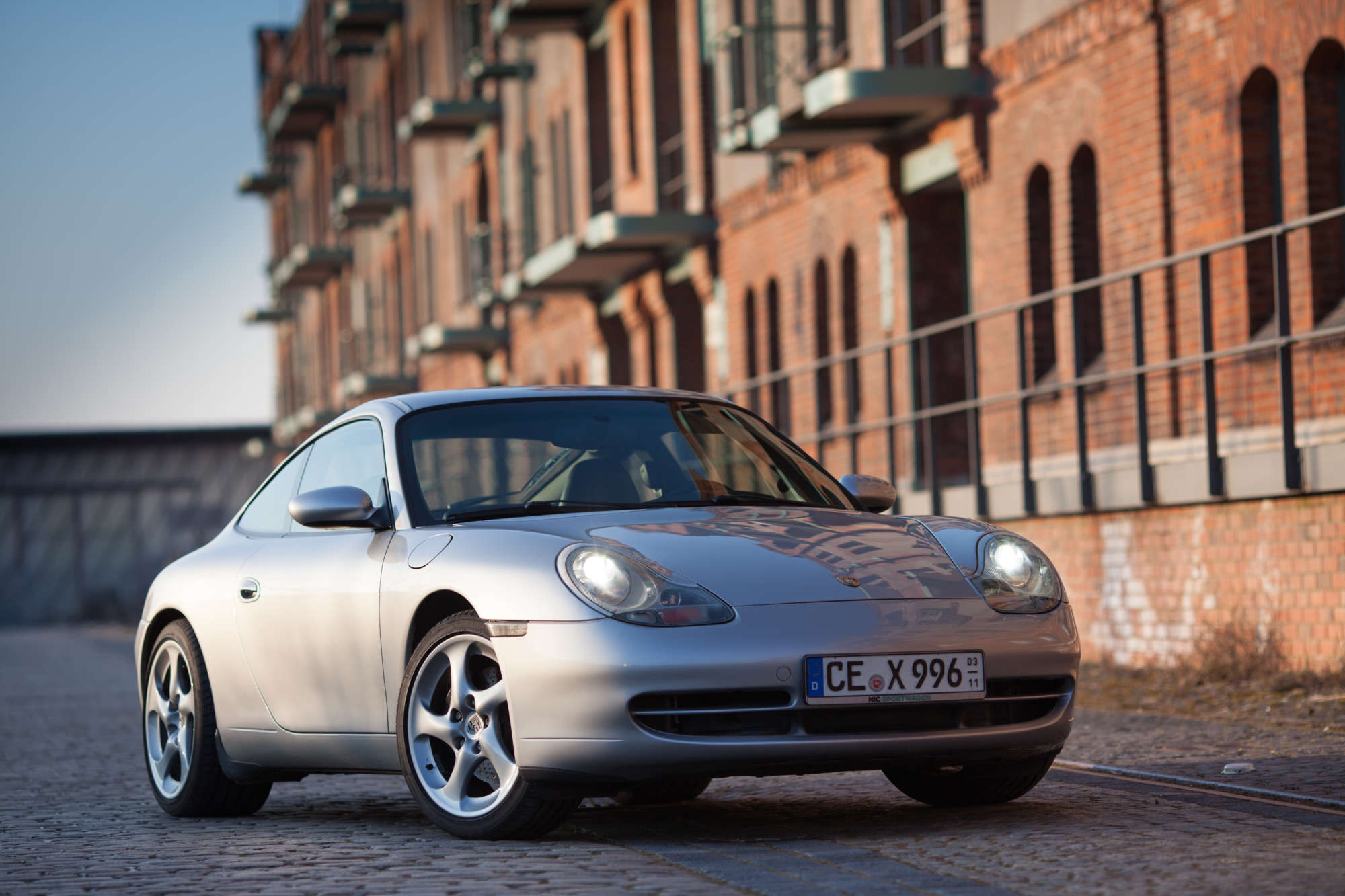 So, despite the unspeakable discussions about intermediate shaft bearings and liner coatings, I kept coming back to the 996. With the classic fried egg headlamp shape, the narrow 996 before the facelift in 2002 is the most beautiful 911 for me, especially the GT3. The then-new shape without the classic round headlights gives the car a certain independence and makes it stand out from the now seven generations of 911 up to the 991. My girlfriend was now so annoyed by my new favorite pastime, namely the car search, that she asked me if we shouldn’t finally just go and buy one. The criteria became stricter as time went on. I decided It should be a late 3.4 Carrera 2 with a manual transmission. It was important to me that the car was regularly maintained and regularly driven, no garage queen, so to speak. The three spoke GT3 steering wheel and a painted center console were the must-haves for the interior.

In October 2017, I discovered a 996 which ticked all the boxes, with a good service history and without any repainting at a dealer in Hamburg. The car gave the impression of having been well-maintained. All rims were immaculate, tires and brakes were new, a sports exhaust system was fitted. The interior looked better in reality than in the photographs. It has aged well with its round buttons and the soft lines in the center console.

The seller was a bit nervous about the raging autumn storm Xavier, and had to be persuaded to go for a test drive. In the worst Hamburg storm weather I drove a 996 for the first time. With the seller on the emergency seat behind my girlfriend. We drove on the wet roads more or less slalom around the fallen branches, so that the steering fascinated me immediately. As in the 924, any bumps were immediately felt through the steering wheel. Without any play and with a very quick rack, the steering works almost telepathically. Also, even for me with shoe size 47, the pedals were perfectly placed, as was the gear lever with the sports gear knob. Braking with heel and toe revmatching downshifts? Perfect from the first try. The engine was revving nicely and had more than enough torque, so that you could roll through downtown Hamburg in sixth gear at 40 km/h.

We drove on the wet roads more or less slalom around the fallen branches, so that the steering fascinated me immediately.

How could it be otherwise? I was in love again with a car that had earned its spurs in Weissach. Once again, it was a Porsche that had had a stepmotherly existence. Anyone who made his affection for one of the first water-cooled 911s public a few years ago had to expect to be called a heretic by Porsche purists. That did not matter to me with the 924 and I did not care about that with the 996 either. If you put the prejudices aside, you will be rewarded with a great mix of modern amenities and classic 911 features. Great steering, revving engine, sheer boundless traction and, if necessary, even space for the kids.

Some things are only understood when you get older.

After checking the vehicle underside out on the lift, I signed the purchase contract and bought my first 911 before my 30th birthday. No GT3, but a very simple Carrera 2 from the cheapest series. As with the 924, I would henceforth keep a Porsche, which is still flying somewhat under the radar, in my garage. One that not everybody likes, that polarizes people into two groups. That reputation has changed for the 924s over the years. Will that be the case for the 996 as well? It doesn’t matter to me. Until then, I will enjoy driving the “Poor Man’s 911”. And as it was with the “grown-up food”, I also slowly learnt to like the air-cooled 911s. Some things are only understood when you get older. 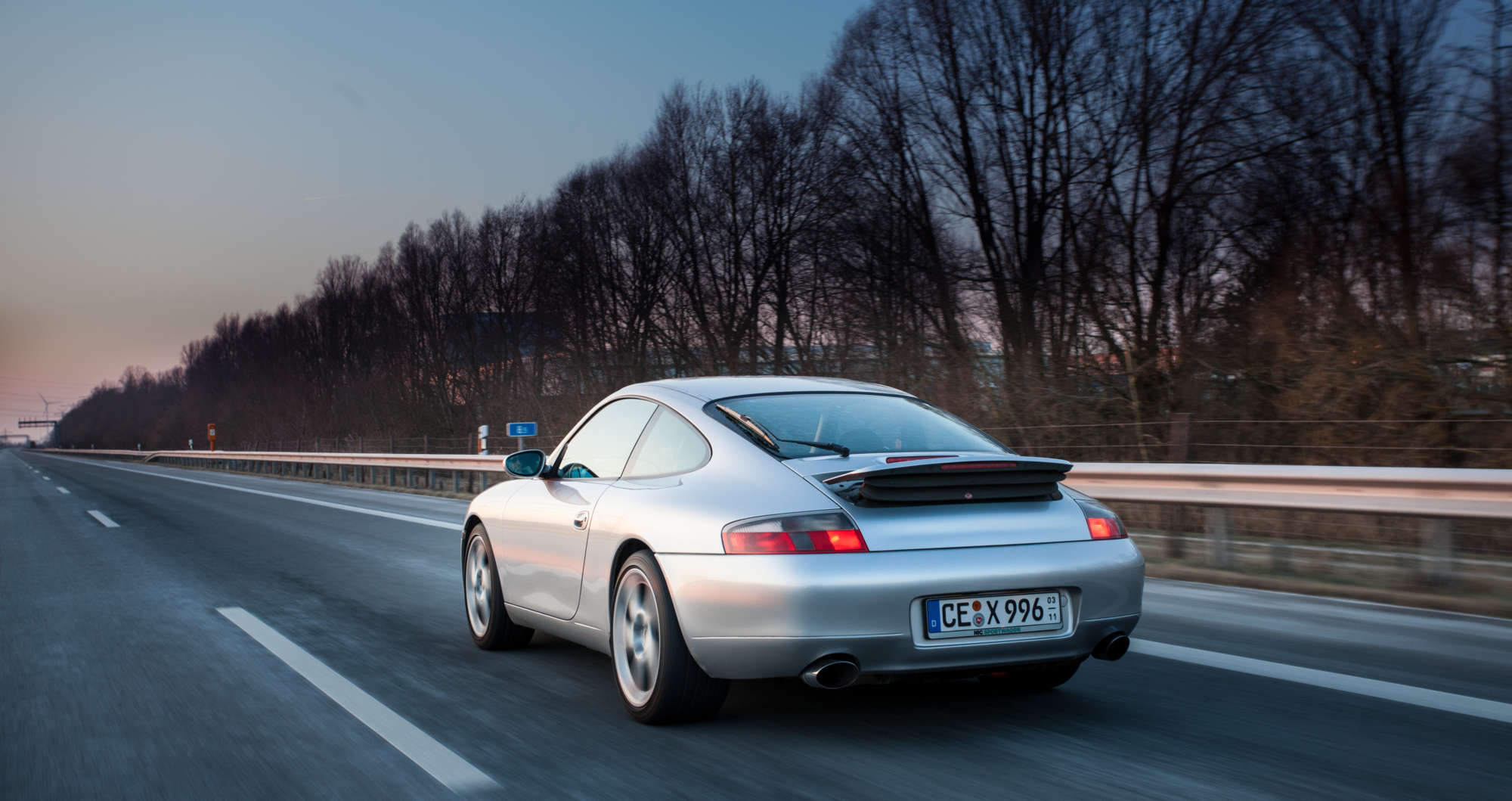