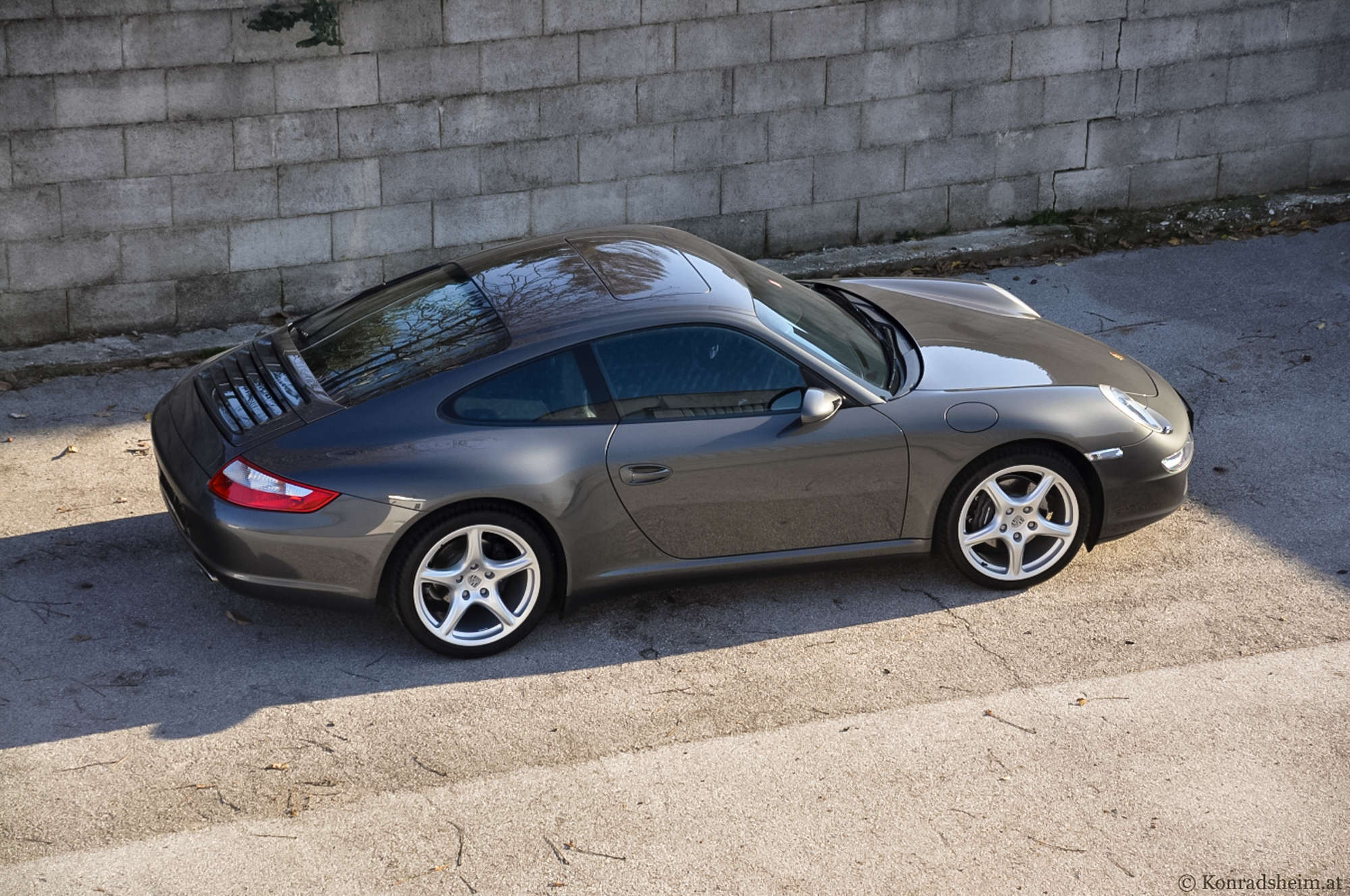 Buy Porsche 997.
On the Elferspot Marketplace.

Porsche took the criticism with the outgoing 996 very seriously while developing the 997 generation of the 911. Stuttgart’s second watercooled 911 came out in 2005 and got a new front end with circular headlamps, going back to a more classic design. Production of the first gen 997, or 997.1 ended ten years ago in 2008. We think it’s a good reason to answer the most important questions any potential buyers should ask themselves when looking for a Porsche 997 Carrera (S), so you don’t have to read through the countless internet forums.

1st question: Which 997s are out there? Which one is the best option for me?

At first we want to bring some clarity to the complex Porsche 997-lineup. The 997.1 was built from 2005 to 2008 and came out in 15 different models. You can get the 997 as a Coupé, a Cabriolet or a Targa. The 997 Coupé and Cabriolet were offered with rear- or four-wheel-drive. They were called Carrera 2 and Carrera 4. The Targa was only available with four-wheel-drive, being called Targa 4. Then, there are the S models, which were called 2S or 4S, depending on your choice of drive. This time, we want to set the focus exactly on these Carrera models. For the sake of completeness, we want to mention, that the 997 was also available as a Turbo Coupé and Cabriolet. The model range was complemented by the high revving motorsport derived GT3 and GT3 RS as well as the turbocharged 530 hp GT2.

When looking on the Carrera models, the first question that comes to mind is: Coupé, Targa or Cabriolet? That question can’t be answered very ojectively. If you want to take your 911 to the track, the Coupé seems to be the obvious choice, being lighter and stiffer than its siblings. The 997 Carrera Coupé weighs 60 kilograms less than ne 997 Targa and even 85 kilograms less than the 997 Cabriolet. That doesn’t effect the top speed, but the standard sprint from 0-62 mph takes 0.2 seconds longer in the convertible and even 0.4 seconds longer in the Targa. That being said, the Targa and the Cabriolet are no slouches either. We’re still talking about 0-62 mph in around 5 seconds and a top speed of more than 173 mph.

Sun worshippers, who don’t care about the last grain of performace, can confidently choose between the 911 Targa and cabriolet of the 997.1 generation. Both are completely usable in all four seasons. But with fabric roofs loosing elasticity over the years, the Targa seems to be the better option from a conceptual point of view. However, we don’t want to make a secret of the fact, that the 997.1 Targa, with its low production number of only 4,853 units, is a bit more exclusive and therefore more expensive than the 997.1 Cabriolet.

If you want to buy a 997 Targa, you can skip this part, because, as mentioned above, the Targa was only available with four-wheel-drive. In case a 997 Coupé or Cabriolet is your weapon of choice, you can choose between two- and four-wheel-drive. This depends very much on your planned use purpose. With a 997 Carrera 2S with a stick shift can be considere as a light-footed drivers’ car, a four-wheel-drive tiptronic 997 Cabriolet can be a fantastic daily driver and a perfect travelmate for long journeys.

If you’re still not sure, which Porsche 997 is the right one for you, let’s put it this way: In a daily driven 997, the four-wheel-drive Carrera 4(S) has very reassuring reserves of traction, especially during winter. When you’re planning to use your potential 997 only in very special occasions, when it’s dry and sunny, you could easily do with the Carrera 2(S). In the dry, it’s almost impossible to get even a C2 to its limits of traction. The differences in performance can be neglected here, they are within the measuring tolerance. In terms of weight, every four-wheel-drive Carrera weighs 55 kilograms more than its rear driven relative.

The Porsche 997 Carrera 4 and Carrera 4S have a wider rear end. As a result of the wider track of the 4WD-models, the wheelarches had to grow.

A rarely known fact to many potential buyers is, that the all-wheel-drive Carrera 4 and 4s both have a wider rear end. In comparison to the 997 Carrera 2(S) the fenders had to be widened by 44 mm due to a wider track.

To offer the perfect 997 for any imaginable customer, Porsche introduced the Carrera S as a meatier version of the Carrera. The most obvious difference can be found at the rear end. The 997 Carrera S was fitted with different exhaust tips. Whereas the 997 Carrera S has four pipes with the same diameter, the standard Carrera only hat two ovally shaped exhausts. But if the customer ticked the box for the sports exhaust, that difference is no more. That option brought four exhaust tips with the two outer pipes being slightly bigger than the inner ones.

When looking very closely, there’s one point to clearly identify a Carrera S: The brakes. Hidden behind the big 19″ alloys, which came as standard with the Carrera S, you can see red brake calipers, while the ones on the Carrera remained black. If your car of choice is equipped with yellow calipers, it has the newly introduced Porsche Ceramic Composite Brakes (PCCB). On the exterior, every Carrera S offers bi-xenon headlights.

Suspension wise, the 997 Carrera S got the new Porsche Active Suspension Management, or just: PASM. This system can adjust the firmness of the damper electrically. With the touch of a button, the dampers open or close bypass-canals, which result in the oil having to flow through tighter or wider holes. The smaller the gap, the harder the dampening becomes. If you push the PASM button, you can transform your comfortable GT to an agile sports car with astonishing cornering capabilites. Besides the difference in performance or comfort, a 997 equipped with PASM sits 10 mm lower to the ground, compared to a car with the sports suspension.

4th question: What about the engines?

Due to its close relationship to the M96, the M97 shares some constructive peculiarities with it, like the camshafts being driven by an intermediate shaft (IMS). The bearing, that holds the IMS in place hasn’t always been been without fault. Over the years, the bearings can wear, which leads to catastrophic engine failures. Depending on who you ask, a quote of 8-10% of affected cars seems realistic. There are a lot of aftermarket solutions to solve that problem though. Beginning with a magnetic drain plug with a sensor, that could warn the driver in case of any sign of metallic abrasive in the oil. Who wants to sleep completely peaceful, should consider an upgraded IMS bearing, which can be installed for around 2,000 Euros. When doing that, the rear main seal should be replaced as well. These often get leaky over the years and can be replaced for a few hundred bucks at the occasion.

We wouldn’t recommend to buy the Carrera S just because the extra horses. The performance gap isn’t all that big with only 0.2 seconds between the Carrera and the Carrera S and the top speed only differing by 5 mph. On the other hand, the Carrera S offers a few options, that are nice to have. You have to ask yourself, if PASM, bigger wheels, upgraded brakes and 30 more horsepower can justify the price difference.

5th question: The crucial one – Manual or Tiptronic?

One of the most discussed topics by Porsche fans is the choice between the manual or Tiptronic gearbox. The brilliant Porsche double clutch gearbox (PDK) is only available in the second generation 997. The Tiptronic is more or less an old-fashioned 5-speed automatic transmission, developed by Mercedes-Benz, with a clever software. It’s obviously more comfortable in everyday use but it lacks some performance of course. Compared to other manufacturer’s automatic gearboxes of the time, the Tiptronic is a little bit quicker, but the manual is the more involving choice.

If you’re looking for simple, puristic driving pleasure or want to conquer the race track, we would recommend the manual all day long. For commuting or traveling long distances, the Tiptronic is still worth a closer look. We advise every hesitant potential buyers to go on a proper test drive. With virtually everybody lusting after a manual these days, prices for Tiptronic models are far below the manuals. If it’s driving pleasure you’re heading after, without caring about resale values, you could end up making a real bargain with a Tiptronic model!

The Porsche 997 – Already a future classic

The Porsche 997 has been the first of the modern 911s, which took its design inspiration from the classic 911 again. With the oval shaped headlights, it is already considered as a future classic. The 997.1 ist the last Carrera with manifold injection. Even it was more of a technological evolution, than a revolution prices are a good amount above the 996’s. No matter what 997 you choose, it is stable in value and great to drive. It is relaxing to drive, but can still make your blood race. The 997 is far from being a rational car but by no means unreasonable. It is a real sports car but still practical. The 997 is a genuine 911.

The first generation of the Porsche 997 is already considered as a future classic. 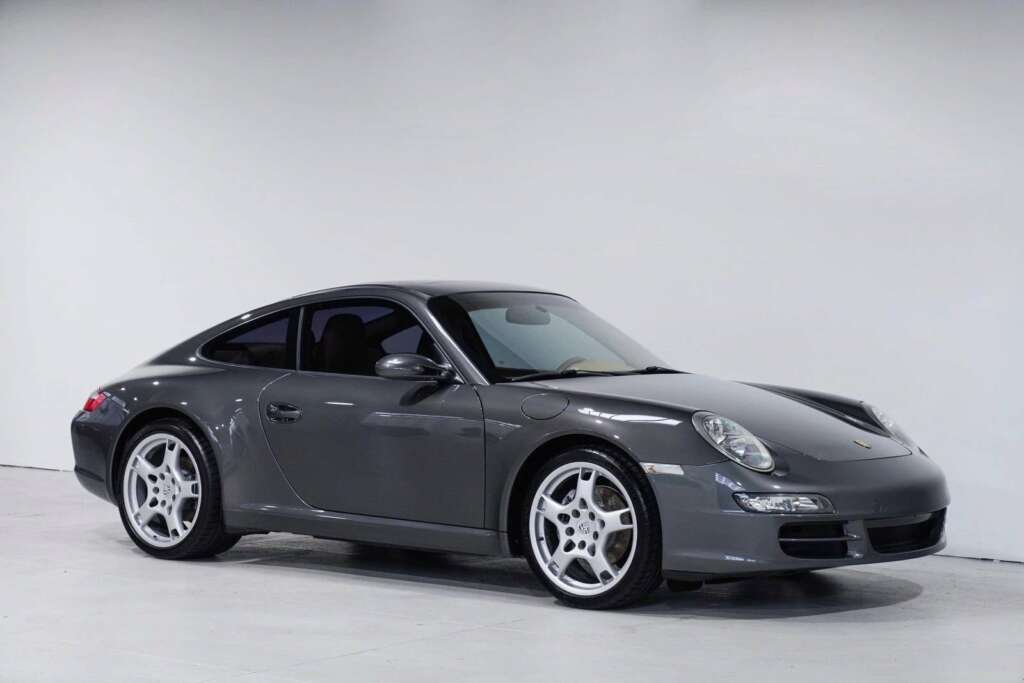 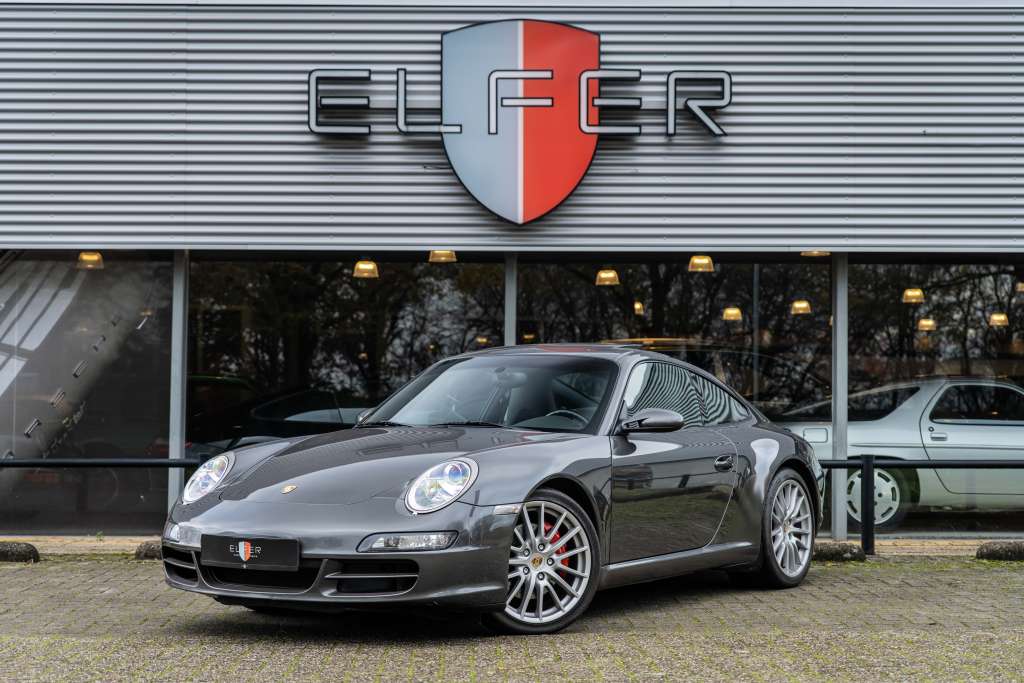 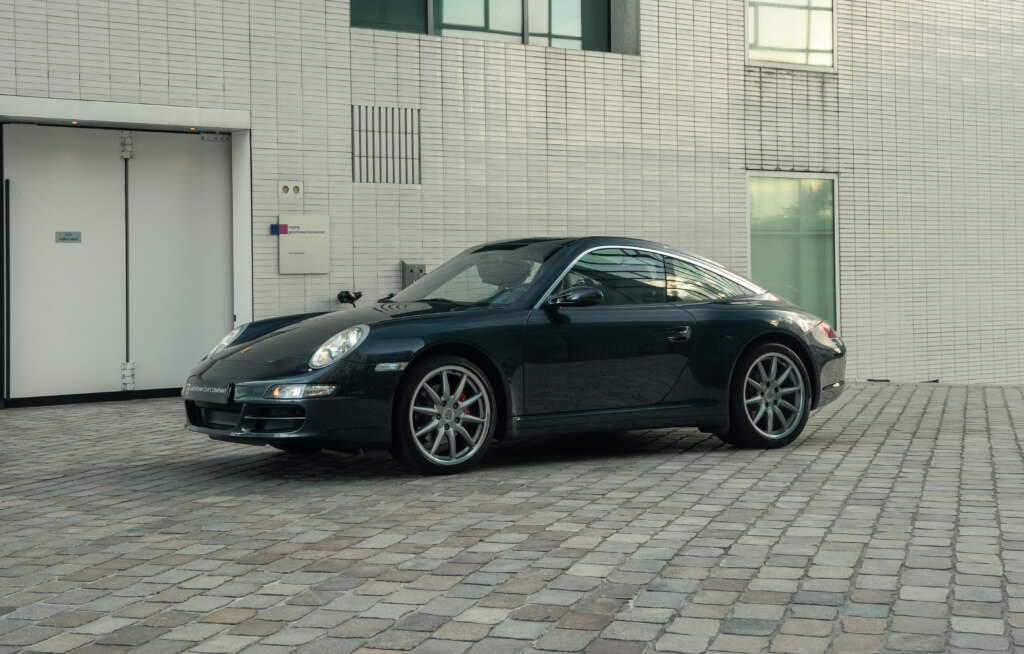 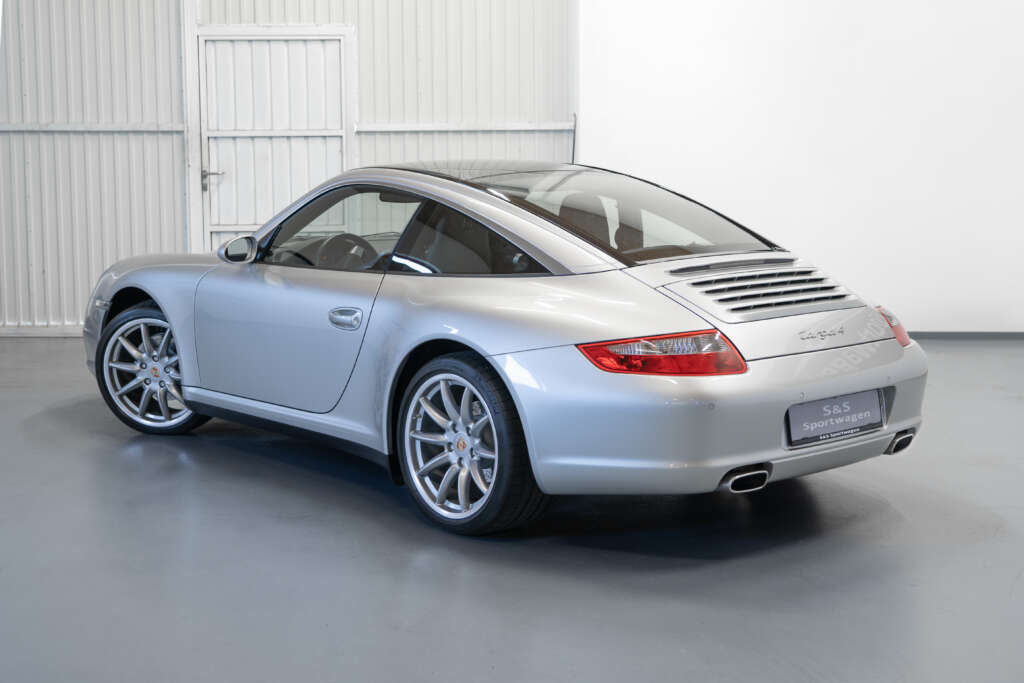 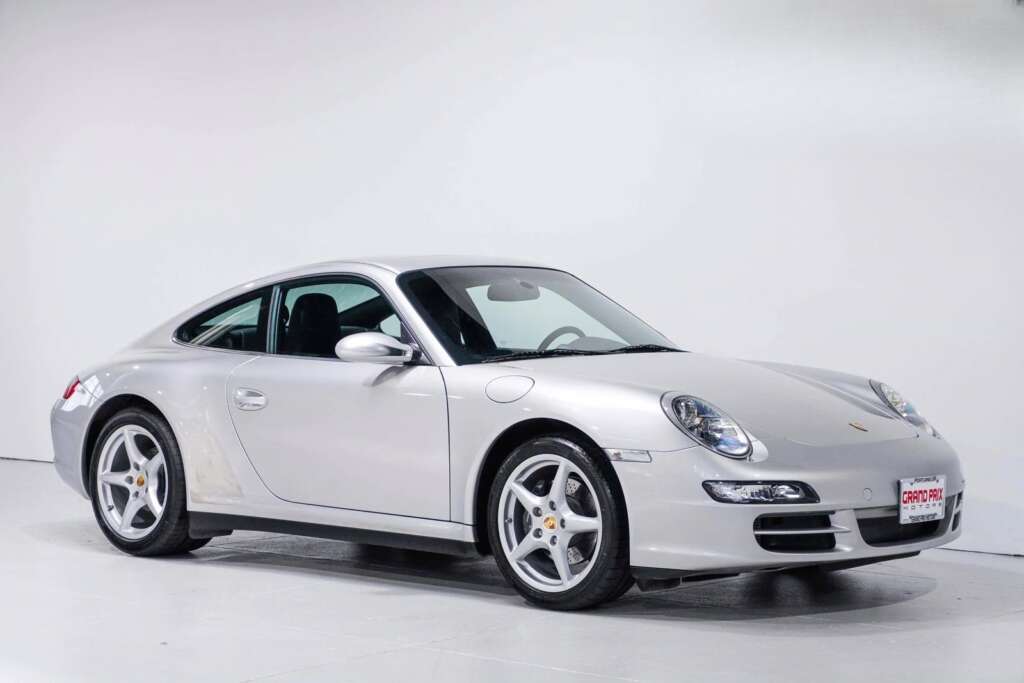